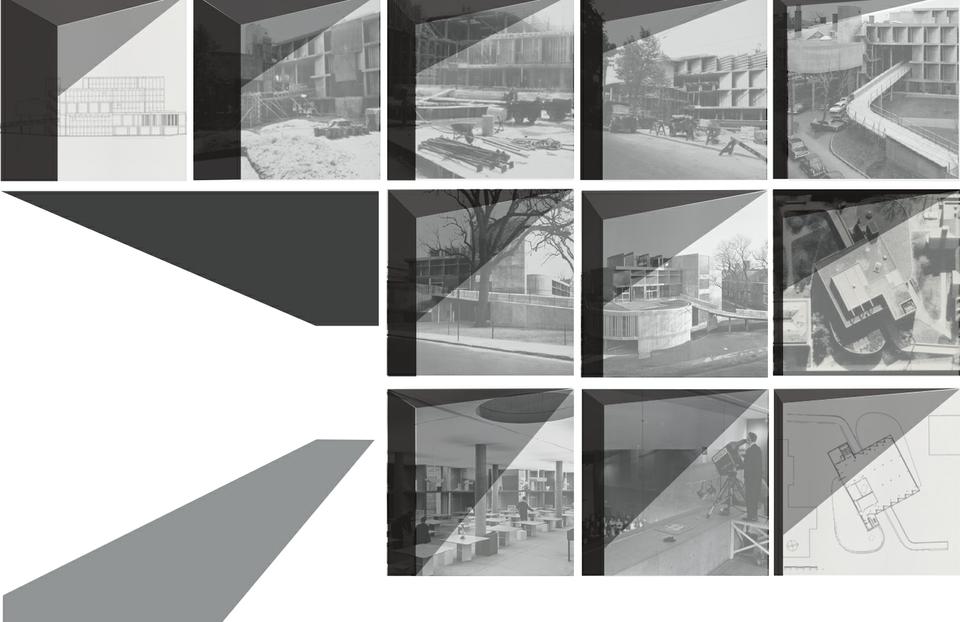 Mark E. Talisman ’63 carried wood from a shipyard, to the T, through Harvard Square, and up five flights of stairs in Matthews Hall. Creating large sculptures with the wood he collected, he would work in his room or in space he could find outside.

But in Talisman’s senior year, the Carpenter Center for the Visual Arts opened to provide a home for Harvard’s student and faculty artists. The Carpenter Center, modern architecture pioneer Le Corbusier’s first and only North American structure, was and remains the official home of the Department of Visual and Environmental Studies.

The construction of the art building signaled a decisive change in the trajectory of the College’s attitude toward the study and creation of art in the classroom, creating new space for students to learn, create, and exhibit their work.

“This legitimization of fine arts changed everyone’s lives,” said Frank P. Mouris ’66, an Oscar-award winning filmmaker who credits the Carpenter Center for cultivating a continued love of the arts. “It’s powerful that the building itself could inspire so many students to continue creating.”

A SPACE OF THEIR OWN

Prior to the Carpenter Center’s opening, Harvard did not have a central space in which students could practice and display their art. The College offered art classes before to 1963, but these classes were often taught in conjunction with other schools in the University system.

Because the classes offered before 1963 dealt mostly with classical art or architecture, students wanting to practice their art in a studio class were left to find their own art spaces. This meant working more closely with the Houses and House Masters to find local spaces where they could make and exhibit their artwork.

“There was never enough exhibition space in the Square,” Talisman said. “Especially not for students like me who weren’t professionals but badly wanted to have our art showcased.”

As a result, students turned to churches, House libraries, and the Brattle Theater for exhibition space. The House Masters in Quincy House agreed to show Talisman’s work in their residence in order compensate for the College’s lack of showcasing venues.

“It was crazy that they wouldn’t have made space for that. We as artists were left to suffer out in the cold,” Talisman said.

Made of concrete and covered in straight lines, the Carpenter Center was erected in contrast to Quincy Street’s staple Neo-Georgian, classic Harvard red brick structures. Designed by Le Corbusier, the building’s obvious contrast to its surroundings solicited criticism.

“There was certainly a big controversy about having this modernist icon amongst the [Harvard] Faculty Club and the red bricks,” Rodowick told The Crimson in September. “[Le Corbusier] knew that this would be his only major building in North America, so he was essentially given carte blanche.”

The building is significant for more than just providing the department of Visual and Environmental Studies a space, according to Rodowick.

“The building is special not only because it is unique but because it is an art building,” Rodowick said. “It was meant to be an artistic capstone to his career.”

But when Mouris first toured Harvard’s campus, he said he that—despite the building’s status as a Le Corbusier original—the Carpenter Center looked like “a fat concrete wedge.”

But Talisman said that the rejection of the Carpenter Center was a hesitation to changing architectural styles.

“I thought that the whole thing was amusing, honestly. These protests were little more than half-baked discussions about shifting architectural norms,” Talisman said.

The building’s design also allowed some students to use the structure for unorthodox purposes.

“People would drive their Volkswagons off of the ramps for fun some days. We had some exciting times at the Carpenter Center after hours,” Mouris said.

Despite any disliked the building’s aesthetic, Mouris explained that the cause to create a space for artists “was so hard fought,” the building’s appearance “didn’t matter.”

Harvard’s art curriculum slowly began to change with the addition of the Carpenter Center, culminating in the creation of the Visual and Environmental Studies Department in 1968. The space allowed for the creation of more studio classes as well a gallery for student art.

“The Carpenter Center was always meant to be an exhibition space. We feature work by students, faculty, and visiting artists on a regular basement in our galleries,” Rodowick said.

The building itself was a momentous step in the evolution of student art at Harvard.

“There exists a spark deep inside students, and it is the College’s duty to ennoble and enlarge this spark. Art should never ever be suppressed by necessity or space constraints,” Talisman said.

The program expanded with time in order to accommodate digital media, and students were eventually showcasing both live-action and animated films. Mouris would go on from the Graduate School of Design architecture program offered jointly with the Carpenter Center to teach animation to future Visual and Environmental Studies students and win an Oscar for his animated short “Frank Film”.

“I owe all of that to the Carpenter Center. It changed my life,” Mouris said.

—Staff writer Charlotte D. Smith can be reached at charlottesmith@college.harvard.edu.