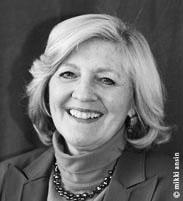 When Ellen H. Goodman ’63 was a student at Radcliffe College, she did not have any female teachers. Radcliffe students had curfews, rules that prohibited closed doors when male Harvard students were in their dorms, and a possibly mythical but widely rumored “one foot on the floor” rule for both parties.

But Goodman, who would graduate from Radcliffe and enter the workforce during a time of political and social change, came to write extensively about these inequalities and the position of women in society during her career in journalism. A Pulitzer Prize winning columnist, Goodman continues what she describes as maintaining about gender relations in culture in retirement.

“Thank goodness it’s hard for people like you to imagine what it was like,” said Suzanne Braun Levine ’63, a former classmate of Goodman’s and a recent friend and colleague. She, like Goodman, has written about the experience of women in her generation. Levine was the first editor of Ms. magazine before becoming the first female editor of the Columbia Journalism Review. In their work, both Levine and Goodman have emphasized the path that social movements have taken as writers and speakers have nudged public opinion towards progressive policies.

Levine and Goodman acknowledge that they attended the College during a period of change. But although women beginning to be accepted to graduate schools and being offered Harvard College degrees--as opposed to only Radcliffe--at commencement, Goodman said that the opportunities for women were just not there at the College.

“The Crimson didn’t have any women on its staff,” Goodman said. “I hate to sound like that—it really does sound like I walked through miles of snow to school... but everything changed very soon after that.”

When Goodman entered the workforce, she explained that writing positions were not open to women. Instead, she because a researcher at Newsweek magazine. The summer of 1963 saw Martin Luther King Jr.’s March on Washington. It was only in 1964, a year after Goodman’s graduation, that the laws began to change, ushering in new conversations and standards about gender and race in the workplace—in July of 1964, President Johnson signed the Civil Rights Act, which prohibited segregation and discrimination based on race or gender.

In 1965, Goodman became a reporter for the Detroit Free Press, and in 1967, she began writing columns for the The Boston Globe.

Goodman’s reporting on the state of gender equality and social change movements earned her a position as a syndicated columnist with the Washington Post Writers Group in 1976 and the Pulitzer Prize for Distinguished Commentary in 1980.

“I think [her writing is] terrific, and I think she’s very savvy,” said Judith Dollenmayor ’63, a former classmate of Goodman’s and current associate director of Corporate, Foundation, and Government Relations at Vassar College. “She’s been a staunch feminist since the late 70s.”

In much of her recent writing, Goodman has looked back on four decades of change. When Goodman graduated in 1963, the 50th reunion class was the Class of 1913. Those women did not even have the right to vote, and according to Goodman, many were suffragists.

In her later columns, articles, and commentary on talk shows—whether she was picking apart Palin’s political choices or criticizing the conservative platform’s failure to address global warming—Goodman maintained a liberal, witty, and intelligent voice.

“Practically everywhere along the line I would come across Ellen’s work, and I would quote it,” Levine said.

In 1973 Goodman returned to Harvard as a Nieman Fellow to study the dynamics of social change. She published a book on women’s changing roles in family life called “Turning Points,” and in 1999 became a Writer in Residence at Harvard, during which time she co-authored a book with Patricia O’Brien about women’s friendships.

Goodman said that there is still work to be done in terms of making the workplace and home life equal for all genders, such as making caregiving easier and encouraging women to pursue more rigorous careers.

“The women’s movement was always going to work in two parts,” Goodman said. “With one part we’d break open the doors that were closed to women, and with the other part we’d walk through, transforming society for men and women. Turns out it was a lot easier to open the doors.”

Despite her retirement, Goodman continues to make change. She founded The Conversation Project in 2010, a public engagement campaign that encourages families and loved ones to talk about end-of-life plans.

Looking back on her years at Radcliffe, Goodman said she enjoyed her classes in the history department and had fun attending musicals and other social events. She jokingly said she remembers a handful of facts and a handful of people.

“I don’t know if this is going to be depressing or not, but these will not be the best four years of your life,” she said. “I promise you—it gets better.”

—Staff writer Virginia R. Marshall can be reached at virginiarosemarshall@college.harvard.edu.