Throughout tumultuous year, Evelynn M. Hammonds defended her vision that to be the Dean of the College is to be a guardian of students 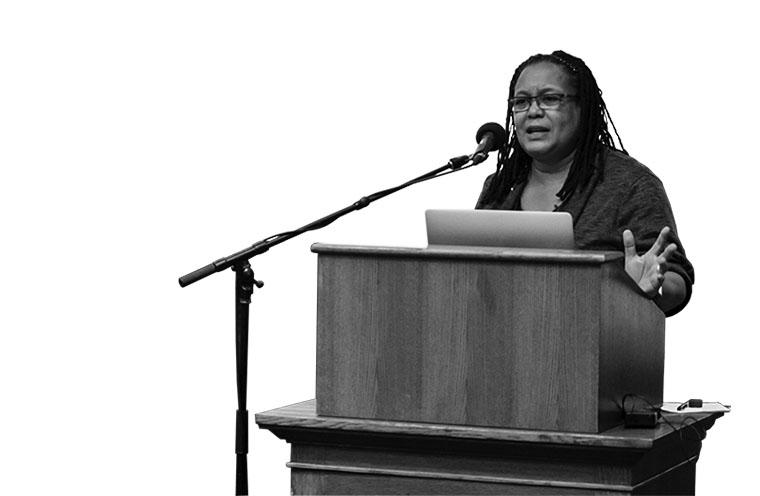 Evelynn M. Hammonds, who will step down as Dean of the College on July 1, speaks about Wintersession programming at a reception in the Barker Center last September.
By Nicholas P. Fandos and Jared T. Lucky, Crimson Staff Writers

Alone behind a slender microphone, Evelynn M. Hammonds gazed somberly over the assembled members of the Faculty of Arts and Sciences.

Prepared script in hand, the Dean of Harvard College was about to tell the University’s most influential faculty that she had broken their rules in an effort to safeguard the confidentiality of her students.

Her audience already knew that she and other University officials had secretly probed the email accounts of the College’s resident deans. But in the Faculty Room in University Hall on the second day of April, they were to learn that she had conducted a second set of email searches—this time, illicitly.

The revelation lasted only a couple of minutes, but that was time enough to bring into focus the mindset that guided Hammonds through the most extensive academic integrity investigation in Harvard’s history. Admitting to damaging mistakes in the way she handled the searches—mistakes that some have suggested would ultimately cost her her deanship—Hammonds stood by her vision of the College as an institution meant to protect students as they learn and grow.

With Hammonds’s five-year tenure drawing to a close this summer, students and faculty say that this strong commitment to safeguarding her students was often impeded by unforeseen crises and administrative shortcomings. The dean who cared so much about protecting students, they say, could not get the job done.

Hammonds would not agree to be interviewed for this story, but one of her close advisors, College Dean for Administration D. E. Lorraine Sterritt, suggested in an email that the Dean of the College position is meant to be in part about caring for undergraduates.

The Dean of the College, she wrote, is “both the chief administrative officer of the College and the person who must enact the vision of the College,” charged with overseeing “the education and wellbeing of the undergraduate body.”

Observers say that Hammonds has embraced this mandate during her time as dean. But despite her efforts to protect and nurture students, they said, Hammonds was hindered from the start by events beyond her control and problems with her approach.

Hammonds arrived at University Hall in the summer of 2008, just months before the beginning of the financial crisis. From the start, she had to deal with widespread budget cuts and administrative restructuring across FAS.

As hot breakfast disappeared from the Houses, staff size shrank across the College, and one or more students died each school year, Hammonds was forced into a reactionary position from which she never really recovered, several former College affiliates said. Instead of laying out a proactive vision for what the College should be, they said, Hammonds was forced to protect and defend it.

“I think that just made it much harder for Dean Hammonds to focus on the big picture—where do we want the College to go? Instead she was focused on the small things—how do we address these things?” said Van C. Tran, a Lowell House tutor from 2005 to 2011.

Despite these circumstances, Hammonds did push through several efforts to care for undergraduates, including the implementation of Administrative Board reforms, the launch of winter break programming, and the expansion of campus social spaces.

But former Undergraduate Council President Senan Ebrahim ’12 said that Hammonds’s approach was often an obstacle in such initiatives. He said that while Hammonds was open and engaged when presented with student concerns, she had trouble proactively reaching out and following through.

“In my opinion, I honestly think she was 100 percent in the right place in her aims,” he said. “I only expected the best from her, because she really cared about the students, and I think she had a similar perspective in a way that was shockingly progressive from her position as dean. The problem was just in the delivery space.”

By the summer of 2012, the problems of her early deanship would confront Hammonds head on. As international scrutiny descended on the College and the cheating investigation she would lead, the dean who aimed to protect saw her students come under unprecedented levels of scrutiny.

On Aug. 30, Harvard made headlines when it announced that it was investigating approximately 125 students for inappropriate collaboration on a final take-home exam. Although the University took the unusual step of publicly announcing the case, as usual it did not release the names of the students in question because the disciplinary proceedings of the College’s Administrative Board are kept strictly confidential.

But that did not stop more information about the case from getting out. On Sept. 1, The Crimson printed portions of an advising email that Ad Board Secretary John “Jay” L. Ellison sent to resident deans suggesting that athletes under investigation consider taking a year off for eligibility purposes. After a Crimson reporter approached Ellison with a leaked copy of his advising email, Ellison emailed all resident deans asking if anyone had shared it. Upon receiving that email on September 1, Senior Resident Dean Sharon Howell reached out to most of the resident deans to talk personally, but no one had an explanation.

As the leaks continued, Hammonds and her College administrators were growing increasingly worried that new information could threaten the confidentiality of students.

On Sept. 9 the college news and gossip blog IvyGate published information about a potential tiered punishment scheme for students convicted in the case discussed at an Ad Board meeting.

Two days later, on Sept. 11, The Crimson approached Ellison with a leaked copy of assistant Government professor Matthew C. Platt’s original complaint letter, sent to the Ad Board the previous May. The letter, which showed that a typo was at the root of the case, identified two groups—graduating students and members of the baseball team—implicated in the scandal.

Later that night, the fears of Hammonds and other administrators were realized. In a development unrelated to the leaked Ad Board information, Harvard basketball players Kyle D. Casey ’13 and Brandyn T. Curry ’13 made headlines in Sport Illustrated—but not for their widely admired athletic prowess. The year before, the team co-captains had helped the squad earn its first NCAA tournament appearance in 66 years, but now the media was reporting that the two were withdrawing from the College in connection with the Government 1310 scandal in an attempt to preserve their athletic eligibility for the 2013-2014 season.

With students in the headlines, Hammonds and Smith proceeded to secretly authorize an initial round of searches that probed the email accounts that the deans used for administrative work. When in September those searches occurred is unclear.

Months later, on March 9, the Boston Globe broke the story. On March 11, Hammonds and Smith offered an explanation of the searches in a statement to the Harvard community. Although neither leak contained information that could be used to directly identify an investigated student, the statement invoked the confidentiality rules that govern the Ad Board in defense of what Smith and Hammonds portrayed as limited probes into the deans’ administrative accounts.

In the faculty meeting on April 2, faculty members sat in stunned silence as Hammonds revealed that account to be incomplete. After the first search identified a single resident dean, she told them, she ordered an additional round of queries into that dean’s administrative and faculty accounts. Although she consulted with a lawyer in the Office of the General Counsel, Hammonds admitted that she did not get the necessary authorization from Smith, therefore breaking faculty email privacy policy.

Hammonds’s remarks suggested that concerns over the personal identification of students in the media—an outcome faced by Casey, Curry, and a few other athletes—had influenced her actions.

“I might just say parenthetically: many of you are parents, and I ask you to imagine that it was your son or daughter who showed up on the front page of the newspaper,” Hammonds told the gathered faculty. “We needed to act in order to protect our students and the integrity of our Ad Board process.”

But that concern for student confidentiality, some said, led Hammonds to violate the privacy of and abandon her defense of another constituency at the College—the resident deans. Howell and three other College administrators have challenged portions of Hammonds’s and Smith’s narrative of events, claiming that the resident dean who had been targeted was threatened with severe sanctions, even though that dean forwarded the email to two investigated student for innocuous advising purposes.

“There was really absolutely no reason for them to think that the resident deans had any responsibility” for the public outing of Casey and Curry, Howell said.

Even as Hammonds humbled herself before the faculty on April 2, she defended her decision to protect student confidentiality and the integrity of the Ad Board at all costs.

“Indeed, had we not sought to discover the source of the exposure, and further information was released, I would now be standing here trying to explain why we did not take action,” she said.

But she closed her remarks, her last before the assembled faculty, on a more conciliatory note. Evoking the image of her own young son, she reminded her colleagues that she approached her duties not just as an administrator, but as a parent as well.

“I stand before you as parent of a 10-year old boy who I am raising to what I hope will be a good man,” she said.

“I always tell our son how important it is to own up to your mistakes, to apologize, and to make amends,” she said. “I have to model that behavior for him.”

An earlier version of this article stated that the mistakes regarding the email search scandal that Dean of the College Evelynn M. Hammonds admitted to at the April 2 faculty meeting had cost her her deanship. To clarify, while some have suggested that Hammonds’s resignation was linked to her role in the email searches scandal, she was quoted in the New York Times Tuesday saying that the affair was “not a motivating factor” in her decision to step down.