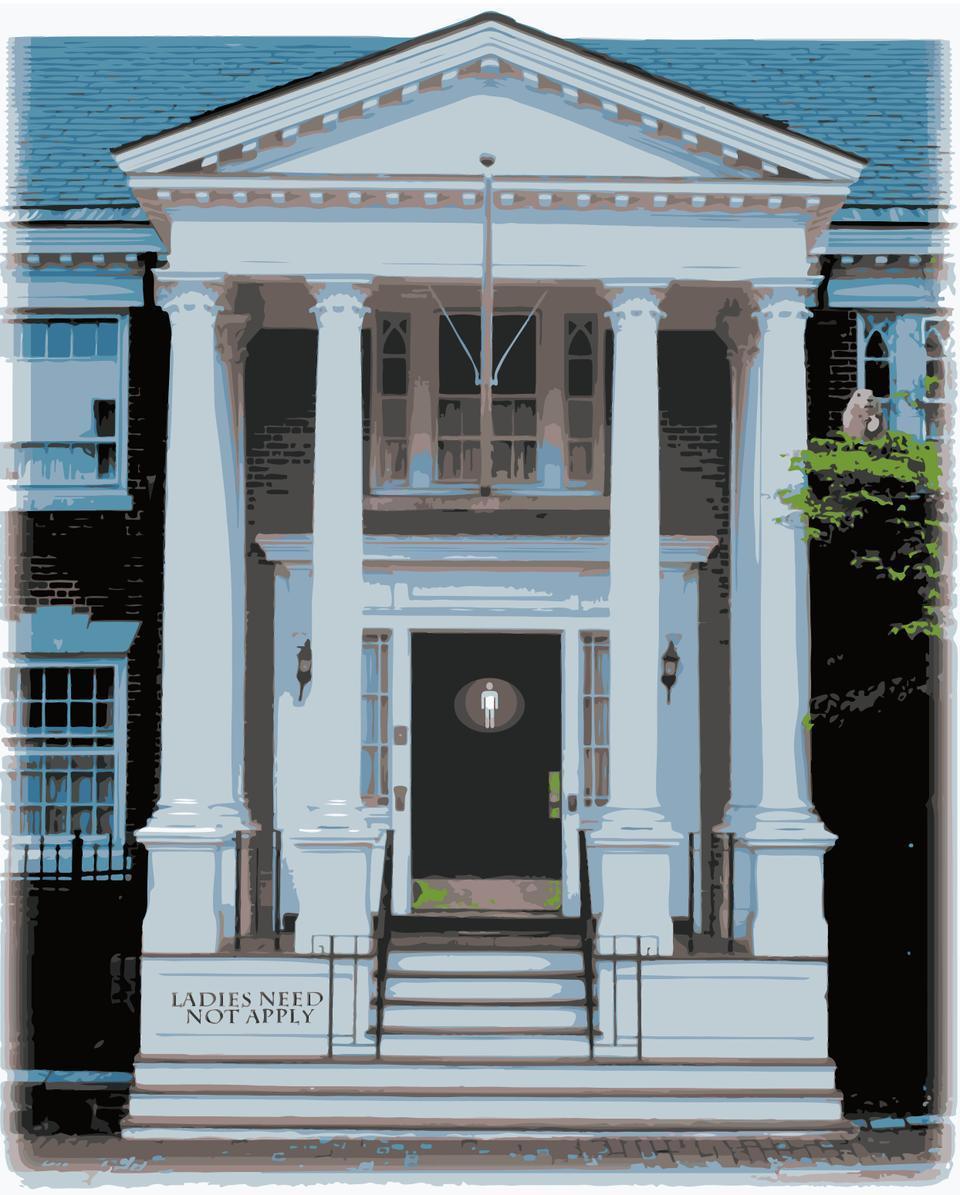 An artistic rendering of the Fly Club, which, though it has never had signage outside forbidding women, is men-only. A female student sued the Fly in 1987 for refusing to admit women, sparking a campus-wide debate.
By D. SIMONE KOVACS and Zohra D. Yaqhubi, Crimson Staff Writers

“It will be a cold day in Bangladesh before [the opening of the clubs to women] happens voluntarily,” Delphic Club member Michael A. Zubrensky ’88 told The Crimson in an article from February 1988.

Zubrensky was responding to the public debate started by Lisa J. Bucher ’88, then Lisa J. Schkolnick, who was determined to challenge the status quo. Citing Chapter 272, Section 98 of Massachusetts General Law, which describes discrimination by sex as a punishable offense, Bucher had filed a complaint to the Massachusetts Commission Against Discrimination the previous December against the Fly Club. In Bucher’s perspective, the male-only admission policies of the final clubs at Harvard College were in direct violation of this code.

Bucher’s complaint sparked the creation of Stop Withholding Access Today, a student group that included members of the campus magazine Perspective and aimed to end male-only admission practices at the final clubs. “SWAT the Fly,” read the headline of one of Bucher’s articles describing her case.

The controversial lawsuit was ultimately unsuccessful; MCAD determined that the Fly Club was a private organization and therefore not under the body’s jurisdiction. The case, however, brought issues of gender discrimination and other social issues on Harvard’s campus to the forefront of conversation and reflected a growing frustration with a social scene that revolved around practices of exclusion.

For Bucher and others on campus, Harvard’s final clubs represented centers of discrimination on campus, even as they had formally severed their ties with the University in 1984.

Dershowitz remembered that Harvard clubs had remained discriminatory toward women many years after women were admitted to the University and as the number of women faculty had grown.

“Harvard University did not play a noble role,” Dershowitz said. “It somewhat encouraged the anti-woman policy. It remained an old boys’ club for many years after it admitted women.”

Despite their many objections to these club policies, students said that without a female counterpart of final clubs, women were forced to turn to a social scene dominated by men.

“If you were a woman at Harvard, you had very little opportunity for a social life that didn’t involve somehow pandering to the boys in your class,” said Deborah Copaken Kogan ’88.

“Everyone knows that the social life at Harvard is lame,” Bucher said. “We just knew that having these clubs that were important to campus life discriminating against women had to be changed.”

Among the alleged discriminatory practices women remembered was being led into the clubs through side doors—only male members were allowed to enter through main entrances.

Some male final club members, however, did not believe that these privileges constituted discrimination.

“I don’t recall any kind of gender discrimination at all in a college context,” said Peter Y. Lee ’88.

A member of the Delphic club, he noted the number of exclusive female and male social organizations, like fraternities and sororities, at other university campuses.

Frustration toward final clubs, however, was not restricted to the policy of women’s admission—some students at the time also felt that the clubs contributed to campus elitism.

“I got to college and I hadn’t even heard of ‘prep school,’” Kogan said. “I didn’t know that there was a class system in my country at all.” Kogan said that the social environment at Harvard, particularly that found in the social clubs, quickly brought this class system to light. “We understood that the men that were in the final clubs were of a different class, or aspired to a certain class, or [were] born into a certain class,” Kogan said.

The issue of final clubs reinforcing a classist struc-ture, Kogan said, was not addressed by Bucher’s complaint. Kogan cited the approximately 10 percent of Harvard’s male population that was granted admission to the clubs as a significant barrier to male entry as well.

“While I believe what [Bucher] did was very important and a very positive first step,” Kogan said, “what the case wasn’t addressing was the institutional classism—it was addressing sexism.”

Bucher herself held concerns that extended beyond those her official complaint directly cited. “[Final clubs] seemed to be a locus on campus for sexual violence,” she said, recalling a close call she had during a final club party she attended, during which she had almost become a victim. “There were all these stories that were circulating...about women being vulnerable at these places.”

Bucher hoped that her lawsuit, if realized, could somehow shift this dynamic.

Even today, final clubs are not co-educational, and Harvard students continue to debate their exclusivity. “It’s just amazing to me that 25 years, later Harvard still has the same problem,” Bucher said. “It’s so sad for me to know that nothing, where it should have been, changed.”

While final clubs were the primary spaces in which Bucher and other female students say they felt discrimination toward women on campus at the time, Dershowitz noted that he saw other instances of sexism at Harvard from behind the scenes as a professor.

“I think there were many professors who did not think women were academic equals,” he said.

Today, Dershowitz said, in the final clubs and beyond, things are still not perfect.

“I think there’s a residual feeling [of sexism] among people that still exists,” he said. “Harvard’s record has been improving, but in 1988, it was a B minus with grade inflation.”

—Staff writer Zohra D. Yaqhubi can be reached at zyaqhubi@college. harvard.edu. Follow her on Twitter at @zohradyaqhubi.