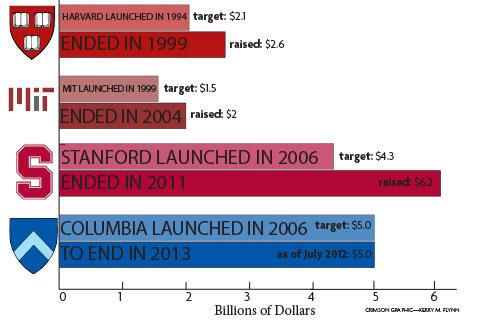 Past capital campaigns at Harvard and its peer institutions have exceeded their fundraising targets.
By Laya Anasu and Elizabeth S. Auritt, Crimson Staff Writers

Part Five of a five-part series on Harvard's approaching capital campaign. Part One was published on April 29, Part Two on April 30, Part Three on May 1, and Part Four on May 2.

The last time Harvard launched a full-fledged capital campaign, it was 1994 and Drew G. Faust was still teaching history at the University of Pennsylvania. That fundraising drive, guided by then-University President Neil L. Rudenstine, surpassed its initial goals to raise a total of $2.6 billion by the time it concluded in 1999.

Today, Harvard is preparing for the September launch of a new capital campaign that looks to raise a sum that could be triple the haul accumulated in the 1990s.

To fund ambitious projects like House Renewal and the growth of the School of Engineering and Applied Sciences, Harvard must raise more money from an increasingly diverse pool of alumni in a more competitive marketplace for charitable donations.

To meet these new challenges, Harvard may look back to lessons learned from its 1990s campaign. It may also turn an eye toward its peer institutions, like Stanford and MIT, who have recently run successful capital campaigns in the 21st century.

The number of multi-billion dollar capital campaigns has been on the rise since 2000, according to Rae Goldsmith, a vice president at the Council for Advancement and Support of Education.

Currently there are over 30 such campaigns taking place at universities across the country.

And with universities looking to fund the new technologies necessary to pursue cutting edge research, the pricetags on these campaigns are rising too.

Between 2006 and 2011, Stanford ran a capital campaign, entitled The Stanford Challenge, which raised $6.23 billion—the most of any university campaign ever, according to school officials.

For these schools, deciding how much money to raise is an important preliminary step.

Senior Harvard administrators have said that the upcoming campaign will likely look to raise at least $6 billion—a figure that could soar even higher.

Faust, the University President, said that Harvard will gauge the appropriate fundraising goal in part by taking into account the recent campaigns at peer institutions.

“If you look at other university campaigns and you look at us in comparison to their size, you get a sense of the ballpark, but we’ll come up with a number when we’re a little closer to the launch,” Faust said in an interview in early March.

Harvard may also look back to its previous campaigns and consider the success of its current two-year “quiet phase” of fundraising to help set a target for the public campaign.

“You have a lot of guidance based on past history of giving, what you’re able [to raise] in the so-called quiet phase of the campaign, while you’re collecting commitments and gifts but not yet declaring a goal,” said Harvey V. Fineberg ’67, who was University provost and one of the most prominent fundraisers during Harvard’s last capital campaign. “That gives you a sense whether a given goal is a proper stretch but not so outrageous to be unlikely to be met.”

As it looks to raise more money than ever before, Harvard must appeal to a different kind of donor.

The University has traditionally turned to a homogeneous alumni base when raising money. These past fundraising efforts drew from “fewer international students, fewer people of color, fewer women, for that matter, who were in the alumni ranks,” according to Tamara E. Rogers ’74, vice president for alumni affairs and development.

But since then, the demographics of the Harvard student body have shifted dramatically, as financial aid programs have expanded, minority recruiting has been introduced, and the international student population has grown—in turn resulting in a more diverse alumni base.

Rogers said that this altered pool of donors requires more complex networking on behalf of her development office, as alumni live in more diverse locations and navigate in a wider variety of social circles.

This new heterogeneity can also create new opportunities for schools like Harvard, opening the door to a wealth of untapped pockets of patrons.

“As institutions have grown their base of international students, that base can then translate into potential donors from all over the world,” Goldsmith said.

Rob Scott, campaign director at MIT’s Office of Campaign Planning, said that globalization has been a boon for university fundraising. MIT wrapped up a $2 billion campaign in 2004, and is in the beginning stages of another major fundraising drive.

“The fact that we live in a world that is increasingly seen as deeply connected throughout networks and that things that happen on different continents have an impact on each other helps with talking with international alumni,” Scott said.”

In courting this increasingly diverse pool of alumni, Harvard must employ new messaging strategies to win over donors whose attention—and checkbooks—are pulled in multiple directions.

Scott said that universities must compete with a wider array of charitable causes.

“For a long time, higher education institutions were the only organizations that attracted such philanthropic support,” Scott said. “Now there’s just such a rich variety of ways for people to get involved.”

This proliferation of philanthropic organizations has made it more difficult for universities to stake their claims in fundraising, Scott said.

By way of solution, Fineberg said, universities are pitching broad, multidisciplinary priorities to diverse donors to attract their support.

“You’re finding more of the [priorities] about the University fundraising effort relating to topics that do cut across a variety of faculties,” Fineberg said. “That’s a strong development that I think will both strengthen the University and make the fundraising more interesting.”

The Stanford Challenge, for instance, outlined eight initiatives that included broad priorities like “human health” and “engaging in the arts and creativity.”

Universities have given their recent capital campaigns sweeping titles like “The Stanford Challenge” and “Cornell Now” to communicate a central inclusive theme that unites their diverse priorities.

At Harvard, this central campaign theme, which has yet to be announced, may look to do something similar as it tells what Rogers described as “a big, compelling story” about the University.