Charlesview Residences Open for Residents Ahead of Schedule

Officials tout new complex as a product of cooperation 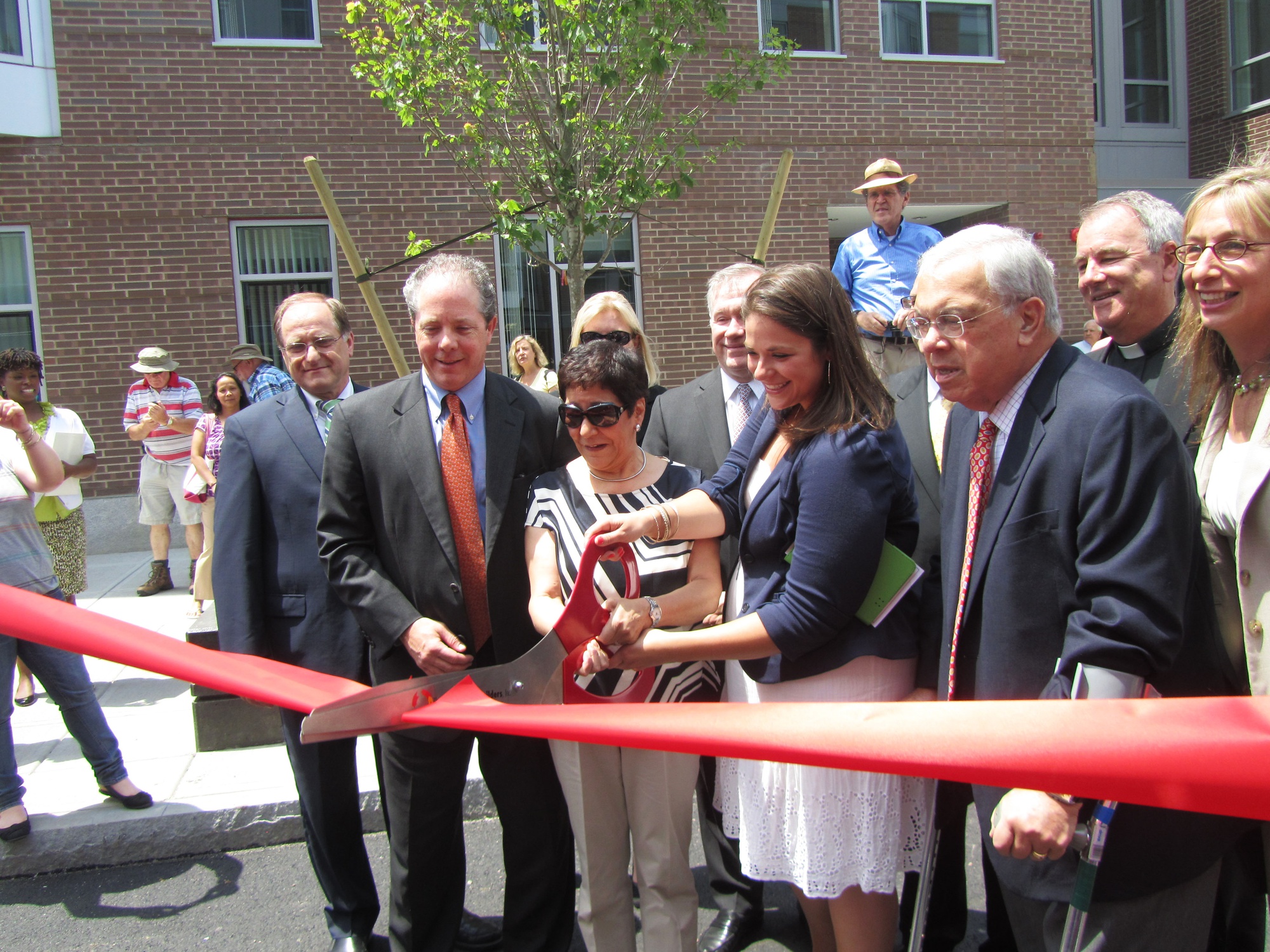 Boston Mayor Thomas M. Menino and other officials look on as Elsa Rojas (left), a current Charlesview resident, and Angela Holm (right), a former Charlesview Apartments resident and the Allston-Brighton coordinator for the Mayor's Office of Neighborhood Services, cut the ceremonial ribbon at the new Charlesview Residences apartment complex in Allston-Brighton on Friday.
By Madeline R. Conway, Crimson Staff Writer

Speaking at a ribbon-cutting ceremony Friday celebrating the opening of the new Charlesview Residences apartment complex in Allston-Brighton, government and Harvard officials praised what they described as a successful collaboration between the community, several partners, and the City of Boston.

The 240 new mixed-income apartments are built on land that the University relinquished in 2007 in exchange for nearby property adjacent to Harvard Business School. The latter site, now owned by the University, has been home to the old Charlesview Apartments complex for 40 years.

“Thank you [to developers and funders] for [ful]filling the hope of a lot of these folks—that hope of living in decent living and sanitary conditions,” Boston mayor Thomas M. Menino said in remarks before the ribbon-cutting. “Today we have it, and it’s because the community said, ‘Enough’s enough, let’s work together,’ and a university...stepped up and said, ‘We want to be part of this success.’”

The new complex is part of the first phase of a development project in the neighborhood that will eventually grow to house 340 housing units. That first phase also includes the creation of a community center set to have its grand opening later this summer.

The new residences were co-developed by Charlesview, Inc., a nonprofit founded by several religious organizations that developed and managed the old apartments, and The Community Builders, Inc., a nonprofit developer of mixed-income housing. Among other funding sources, developers used money from the University given in the 2007 land swap to finance construction.

Menino was joined at the ceremony by a number of other speakers, including U.S. Rep. Michael E. Capuano, officials with several of the project’s partners, and former and current residents of the Charlesview apartments. In their remarks, most speakers hailed the opening of the complex as the product of a cooperative effort.

Thomas R. Gleason, the executive director of MassHousing, thanked Harvard and the AFL-CIO Housing Investment Trust, among others, for taking part in the project.

“This didn’t happen without you, and especially thanks for your money,” Gleason said.

Harvard was represented by Christine M. Heenan, vice president for public affairs and communications, who said in her remarks that perseverance and feedback from the community made the project possible.

In the past, neighborhood residents have expressed mixed opinions of the land swap and criticized Harvard’s development plans for the site of the old apartments. Yet in an interview after the ceremony, Heenan said she believes the complex’s opening is a sign that the University’s relationship with the neighborhood is continuing to improve.

“This [project] is going to create a great deal of vibrancy and stitching together [of] Brighton and Allston,” Heenan said. “I think increased vibrancy for the neighborhood is very supportive of Harvard’s own plans to bring greater vibrancy to Barry’s Corner and North Harvard [Street] and Western Avenue.”

Tim McHale, a member of the Harvard-Allston Task Force, said in an interview after the ribbon-cutting that he is “very hopeful” and “very optimistic” about moving forward in discussions with Harvard about neighborhood issues, including a community benefits package to be included in Harvard’s new Institutional Master Plan for Allston development.

“I personally feel like everybody can be reasonable and open, and negotiations are negotiations,” said McHale, a Brighton resident who lives within close proximity of the new apartments.