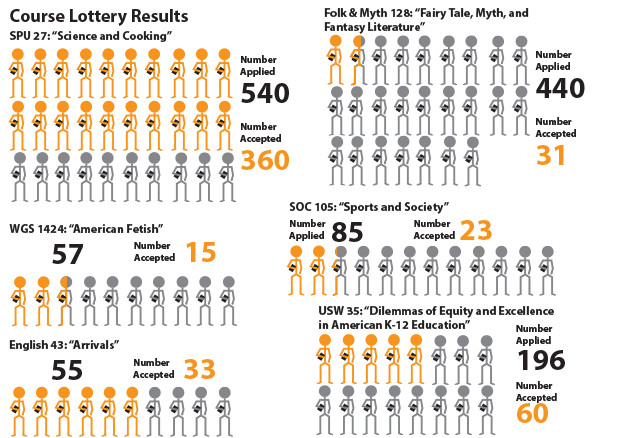 Another Harvard acceptance rate has fallen.

This fall just 7 percent of undergraduates who applied were accepted to take folklore and mythology professor Maria Tatar’s perennially popular course Folklore and Mythology 128: “Fairy Tale, Myth, and Fantasy Literature.” That figure is down from a 10.5 percent acceptance rate the last time the course was offered under a different listing in spring 2012.

Tatar’s course, which accepted just 31 of 440 interested students, was among many that conducted lotteries over the past week to reduce overcrowding in their classrooms. And as course instructors released the results of their random or selective lotteries, many students found themselves the losers of a competitive process.

Just 27.1 percent of students were accepted into Sociology 105: “Sports and Society,” which gave preference to sociology concentrators and seniors in its lottery. And only 30.6 percent beat the odds to gain admission into United States in the World 35: “Dilemmas of Equity and Excellence in American K-12 Education,” which asked lottery entrants to specify their year, high school type, and interest in taking the class.

Faculty members who used lotteries to winnow down their course enrollments expressed regret about having to turn away interested students. Tatar, for instance, called the process “painful.”

But she and other faculty members said they viewed the lottery as a necessary evil to maintain the integrity of their teaching style and the learning experience.

“I think lotteries may often be the price you have to pay for smaller classes,” Steven P. Rozenski, a College fellow in the English Department, wrote in an email. “The educational benefits of having smaller classes outweigh the unpleasantness and challenges of lotteries.”

For her part, Tatar wrote in an email that a limited number of teaching fellows and her desire for a small-class learning environment necessitated a course lottery.

Administrators have said this is not an uncommon occurrence. Associate Dean of Undergraduate Education Noel Bisson wrote in an email that while Harvard is “unusual” in choosing not to cap the enrollments of most of its courses, logistics do sometimes demand course lotteries.

“There are often pedagogical reasons why a course can't grow past a certain number, and in other situations we might not have been able to predict demand,” Bisson wrote.

Currently, administrators try to predict enrollment numbers by asking undergraduates twice a year to complete Pre-Term Planning, a non-binding online form that allows students to list the courses they plan to take the next semester.

However, applied math and applied physics professor Michael P. Brenner wrote in an email that Pre-Term Planning failed to predict the huge interest in his course Science of the Physical Universe 27: “Science and Cooking: From Haute Cuisine to Soft Matter Science.”

According to Brenner, the consistently popular class saw an unusual spike in interest this year, with 540 students applying for a seat. Interest was high enough to prompt Brenner and his co-instructor, physics and applied physics professor David A. Weitz, to increase the cap they had been using for the first three years of the course’s existence, 300, to 360.

Many other courses also experienced this unforeseen popularity. As a result, several professors contacted for this article proposed that Harvard reconsider Pre-Term Planning to better predict student interest in courses.

To combat the issues associated with course lotteries, Light suggested the College consider implementing pre-registration “with an automated selection process, by which students are sorted into limited enrollment courses by seniority, concentration, etc.,” giving students advanced notice of whether or not they have earned a place in the course of their choosing.

An earlier version of the infographic accompanying this article incorrectly switched the labels on graphics describing the course lottery acceptance rates of Women, Gender, and Sexuality Studies 1424: “American Fetish” and English 43: “Arrivals.”