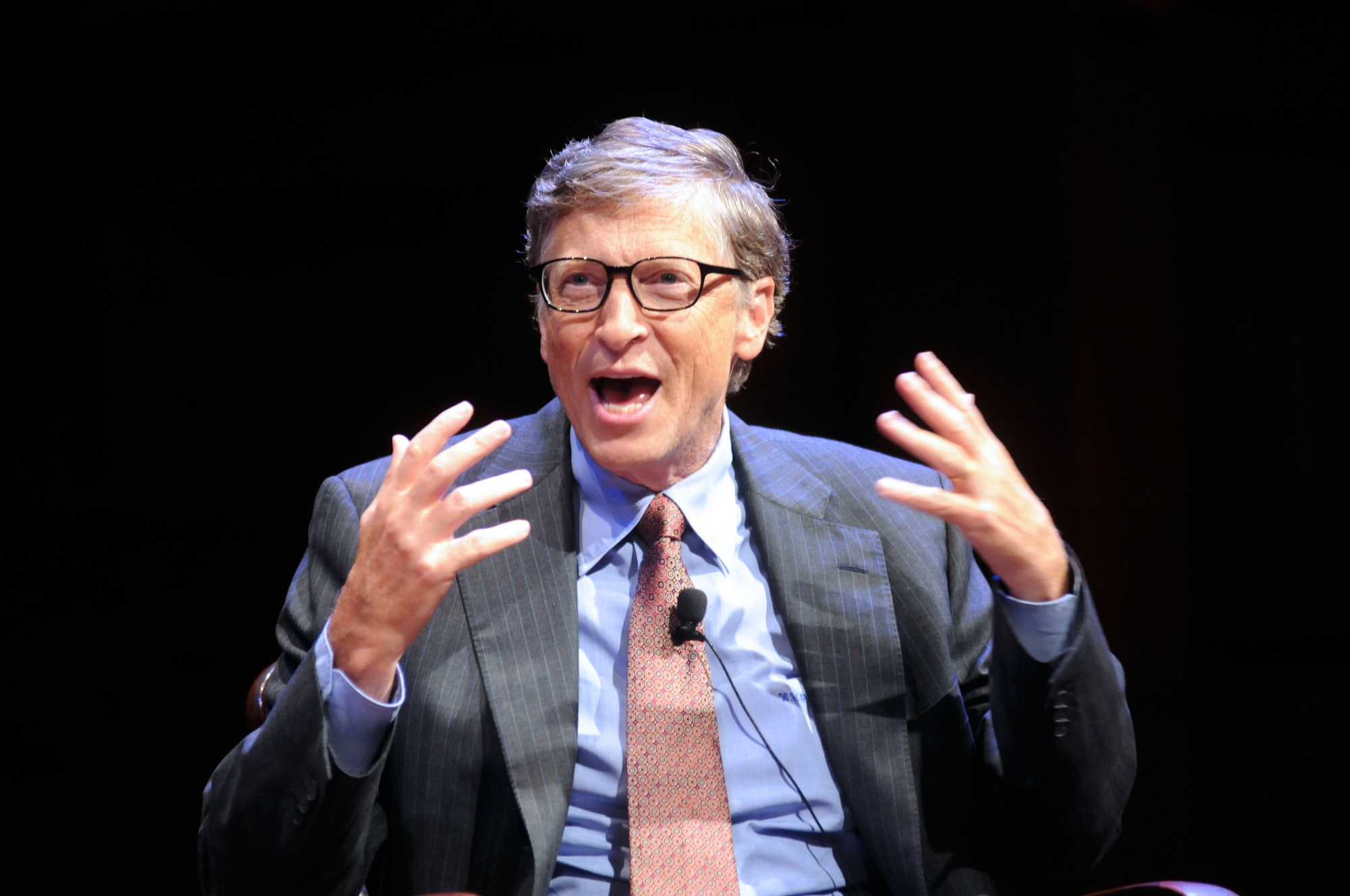 Bill Gates jokes about his reputation for not attending classes in his Harvard years with financier David M. Rubenstein during the public launch of The Harvard Campaign on Saturday. The two met for a discussion about philanthropy in Sanders Theatre as part of the weekend's launch events.
By Nikita Kansra and Samuel Y. Weinstock, Crimson Staff Writers

An afternoon packed with star-studded events for Harvard’s alumni and donors kicked off the public phase of Harvard’s potentially record-breaking capital campaign on Saturday.

The events culminated with an announcement, disseminated in a press release earlier in the afternoon, that The Harvard Campaign would aim to raise a total of $6.5 billion, and that it has accrued $2.8 billion in donations and pledges so far. That announcement, made by Campaign co-chair and Harvard Corporation member Paul J. Finnegan ’75, drew a standing ovation from the several hundred alumni and supporters assembled in Sanders Theatre.

Following the unveiling of the Campaign’s monetary target, Faust took the podium to outline her aspirations for an invigorated fundraising drive.

“This afternoon I want to share with you my ambitions—ambitions for how Harvard will be enhanced and enabled by this campaign,” she said, then touching upon House renewal, development in Allston, interdisciplinary collaboration, and other campaign priorities.

Striking a motivational tone, she said later in her remarks, “[The campaign] must shine a light on why universities matter—and why the higher purposes of higher education must continue to claim a central place in our national life and its educational agenda.”

After mingling at a tent outside Memorial Church shortly before 1 p.m., hundreds of donors, alumni, and Campaign staff members gathered inside the church for a faculty panel entitled “The Future of Knowledge.” The panel featured four professors and was moderated by Jonathan L. Zittrain, a leading thinker in the field of internet law who holds appointments at the Law School, the Kennedy School, and the School of Engineering and Applied Sciences. A brief question-and-answer session followed.

The panelists discussed a variety of challenges and opportunities in higher education, including the impact of technological advances on academia and the role of academic institutions in disseminating knowledge. As part of a segment of the discussion focused on the nature of truth in academia, a well-known clip from The Colbert Report about “truthiness” was played to the audience.

While neither Zittrain nor the panelists directly discussed The Harvard Campaign, their conversation covered many of its themes—among others, interdisciplinary collaboration and the power and limit of technology in spreading information.

Once in Sanders, investor and Campaign co-chair David M. Rubenstein interviewed Bill Gates, who attended the College for three years but did not graduate. Their conversation covered Gates’s time at Harvard, his creation of Microsoft and, later, his work with the Bill and Melinda Gates Foundation and his relationships with other business leaders, such as Steve Jobs and Warren Buffett.

Rubenstein also asked him more trivial questions, such as why users must enter the command “control-alt-delete” to start up the Windows operating system. Gates began giving a technical explanation before pausing and admitting, “it was a mistake,” prompting laughter from the crowd.

The two men discussed Gates’s legacy in the world of business, philanthropy, and even in his own family. Rubenstein asked Gates whether he would trade his success for 10 more years of life.

Faust topped off the afternoon with a speech lasting just over 30 minutes, describing a general vision for the University and the Campaign’s place in its future.

“It is up to us to make sure that we continue to build, to lead, to advance in a world almost unimaginably different from the one our founders inhabited nearly four centuries ago,” Faust said.

Declaring that the Campaign gives Harvard a unique opportunity within higher education, she said The Harvard Campaign is essential for the University’s entrance into an “impatient future.”

“A campaign calls on us to ask what we stand for, what institutional commitment we will make to define who we are and who we will be decades and centuries from now.”

Campaign co-chair Joseph J. O’Donnell ’67 wrapped up the day’s event with a short speech that expressed appreciation for Faust and Vice President for Alumni Affairs and Development Tamara E. Rogers ’74. O’Donnell again emphasized the importance of this “once-in-a-generation collective effort” for Harvard’s future.

Not long after the conclusion of the program, donors headed across the river on Saturday evening for a dinner in Harvard Stadium, which several of the afternoon’s speakers, including Faust, referenced while onstage.

In interviews outside Sanders Theatre, donors responded well to the launch, with many citing the concept of One Harvard—a unified, interconnected University—as a point of shared excitement.

Christine M. Pina, an alumnus of the Graduate School of Education, called the launch “fantastic” and “incredibly inspiring,” adding that she appreciated that Faust’s comments spoke to the University collectively.

—Madeline R. Conway and Nicholas P. Fandos contributed to the reporting of this story.