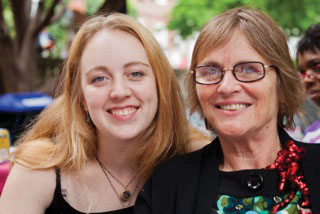 Juliet N. Macchi ’12, a former Lowell House resident who loved art, film, and skydiving, was killed alongside her mother as a result of an automobile accident on Saturday night near Plymouth, Mass.

Macchi and her mother Susan Brightman Macchi had been driving home from a Red Sox game when their car experienced a head-on collision with another vehicle. Macchi’s mother died instantaneously, while Macchi died shortly after being transported to Jordan Hospital, according to police.

News of Macchi’s death was distributed to Lowell House residents Monday in an email from House Masters Diana L. Eck and Dorothy A. Austin.

“She had an ebullient spirit and a wonderful sense of humor,” the House Masters wrote. “She had a great talent for friendship; she was loyal, dependable, and loving. Her friends loved her very much and will miss her dearly.”

In their email, the House Masters also listed Macchi’s diverse array of interests during her time at Harvard. Macchi was a dedicated Visual and Environmental Studies concentrator, they wrote, though she also found time to work as Dorm Crew chief and belly dance with Harvard’s Middle Eastern Dance Company.

In a phone interview, Eck recounted her time as Macchi’s professor for the course, United States in the World 32: “The World’s Religions in Multicultural America: Case Studies in Religious Pluralism.”

Many of Macchi’s friends and acquaintances echoed this sentiment, also describing her as “free-spirited,” “creative,” “unique,” and “heavily involved” in many different activities during her time at the College.

Eck and one of Macchi’s friends, Breeanna Elliott ’15, also said that Macchi was very close to her mother.

Eck said that at the time of her death, Macchi had been working at a Dunkin’ Donuts location in Carver, Mass., and preparing to move with her mother to California to pursue her dream of working as a grip on a film set.

Macchi and her mother are survived by Macchi’s three older brothers, Matt, Mike, and Richard Macchi, as well as Macchi’s father.

Macchi’s death has been met with an outpouring of love and support from those who knew her. Almost 100 people have posted on her Facebook wall since the news of the accident broke, and a tribute in her honor is scheduled for Thursday at 8 p.m. in Lowell House Junior Common Room.

—Check TheCrimson.com for a forthcoming obituary.