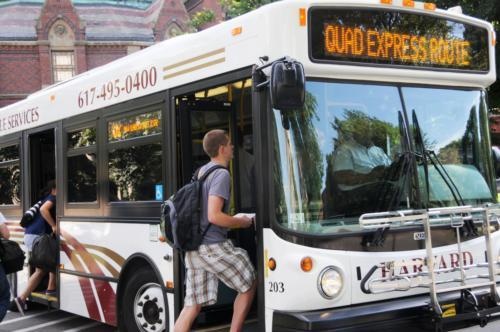 Beginning this weekend, Quad shuttles, like this one pictured in a 2009 file photo, will once again run before noon on Saturdays and Sundays.
By Laya Anasu and Madeline R. Conway, Crimson Staff Writers

Harvard shuttles will resume weekend morning service to and from the Quad beginning this upcoming Saturday, reversing a 2009 cut that halted Quad shuttle service before noon on Saturdays and Sundays.

Currently, while shuttles depart from the Quad approximately every 10 minutes from 7:50 a.m. to 3:50 p.m. on weekdays, they do not begin running until after 12 p.m. on weekends. The Undergraduate Council and the Office of Student Life announced the new extended schedule, which will restore weekend service between 8 a.m. and noon, in a press release Tuesday.

In an interview Tuesday afternoon, Associate Dean of Student Life David R. Friedrich called the service extension a “great collaboration” between the UC, the OSL, and Harvard’s transportation services.

Sietse K. Goffard ’15, a UC representative who has advocated for increased shuttle service, said Tuesday he did not know how frequently shuttles will run on weekend mornings under the new schedule.

The weekend morning service was eliminated at the start of the 2009-2010 academic year as a compromise after students protested a 2009 proposal—part of a proposed $77 million budget cut package for the Faculty of Arts and Sciences—that would have significantly cut late-night weekday service.

Many students responded enthusiastically to the news of additional shuttle service.

“I think it’s fantastic, because a lot of students who live in the Quad have meetings or rehearsals in the mornings on the weekends,” said Claire R. Leibowicz ’16, a Pforzheimer House resident. “Having a shuttle…makes it way more convenient to get to the River.”

Cabot House resident Doo Young Na ’14 said that many times during the winter, he had to push back his morning meetings because there was no shuttle service. “It makes better sense to have morning shuttles if the school expects us to be more productive,” Na said.

Goffard, a Currier House resident, said he was “extremely, extremely thrilled and elated” by the return of the weekend morning service. He added that he “definitely” hopes to continue working toward increasing the frequency of shuttle service on weekday evenings.