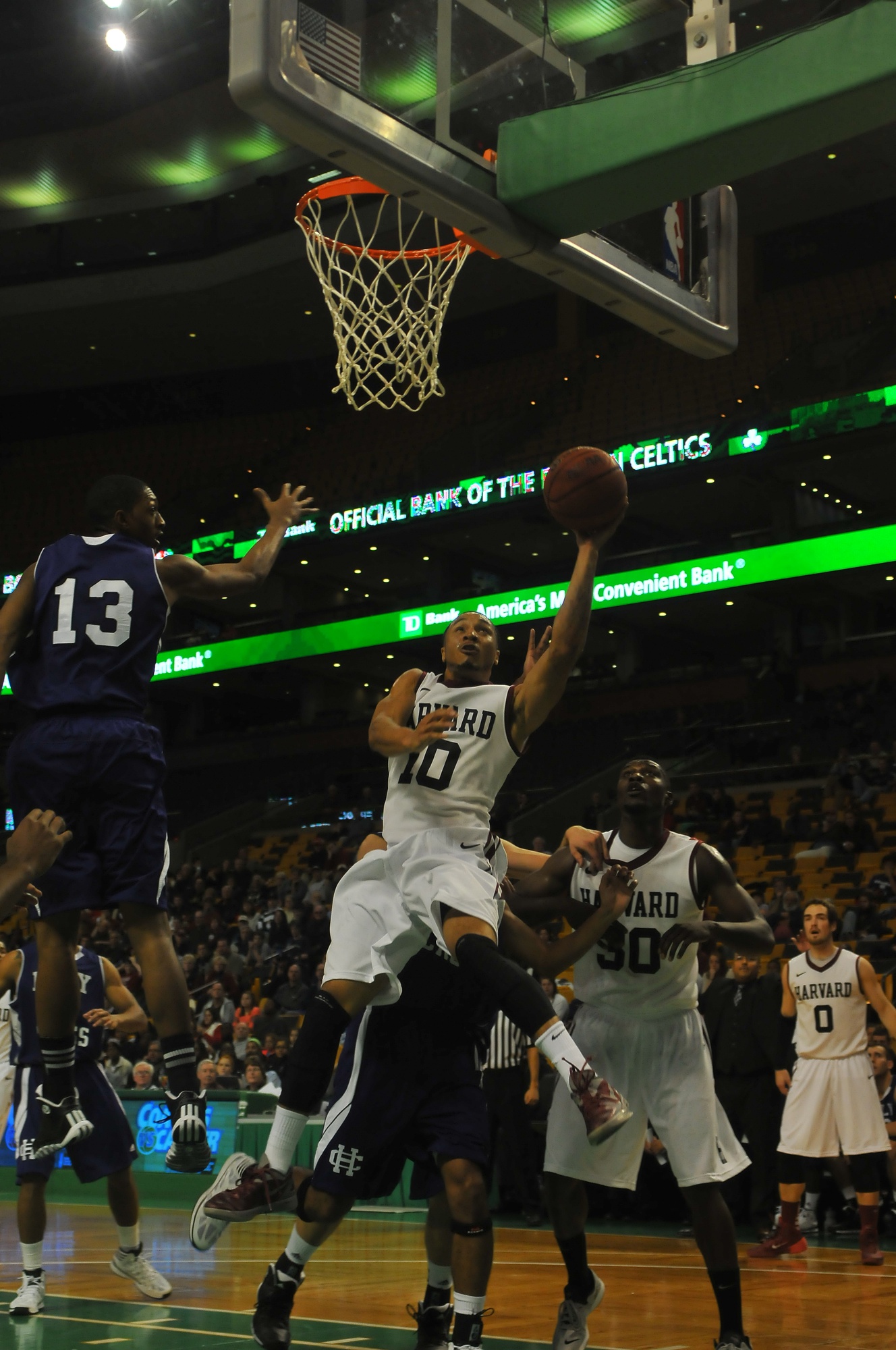 Shown here in earlier action, captain Brandyn Curry tallied eight points in the second half and 17 overall to lead the Crimson to a 61-45 win over Dartmouth.
By Jake Meagher, Crimson Staff Writer

Just days after dropping its second game of the season at Connecticut, the Harvard men’s basketball team returned to Lavietes Pavilion Saturday looking to right the ship against Dartmouth in its first Ivy League contest of the season.

With the score tied at 30 early in the second half, the Harvard co-captain took control, as the team exploded for 16 of the game’s next 18 points to build up a double-digit lead that would stand for the rest of the contest.

Over the course of the Crimson surge, Curry notched eight of his 17 points. He capped the charge with a huge block on a jumper from Big Green guard Tyler Melville that led to a steal by sophomore forward Agunwa Okolie. Okolie carried the ball the length of the floor and threw down a dunk that generated a roar from the crowd and put the Crimson up, 46-32, with 12:23 remaining.

After missing nine games with a left Achilles injury, Curry has slowly been making his way back into the Crimson rotation. The senior played his most minutes all season in Wednesday’s loss to Connecticut but shot just two-for-12 from the field. Dartmouth held him scoreless in the first half, but upon returning from the locker room, the senior broke out of his slump in huge fashion.

“The Achilles is doing really good now—almost in the final stages—so I’m starting to be able to explode off it,” Curry said. “It’s all coming together right now, right in time. It’s conference time, it’s go time, so there’s no excuses.”

Prior to the momentum swing in the second half, the teams were locked in a tightly-contested battle. Harvard could not find a way to contain Big Green forward Gabas Maldunas, who was responsible for 14 of his team’s 27 first half points, including a fade-away jumper as the final buzzer sounded.

“There was not much we could do [to stop Maldunas],” Amaker said. “He’s a 6-foot-9 guy that can put the ball on the floor and drive it. So we tried to shrink the floor…I’m very pleased [that] we didn’t over-help because Maldunas is a good passer and can find shooters.”

The Dartmouth junior finished with a game-high 23 points, converting nine of his 13 attempts from the field. But the Crimson defense managed to contain the rest of his teammates, who shot just 25 percent for the game. From beyond the arc, the Big Green converted just two of its 11 attempts.

Powering the way for Harvard in the first half was junior forward Steve Moundou-Missi. The forward was all over the floor in the first frame, recording 10 points, three rebounds, two steals, and a block. He went on to score 16 in the game.

Wesley Saunders, the Crimson’s leading scorer this season, sat out for his second consecutive game. As a result, Amaker went to his bench early, giving significant minutes to several players who started on the sideline.

Sophomore forward Evan Cummins provided the biggest spark off the bench, putting up eight points in his eight minutes of play in the first half.

Cummins got his name on the score sheet for the final time with 4:30 remaining in the first frame. Senior guard Brandyn Curry used a pump fake to get past one defender at the three-point line before driving to the hoop. The guard went up and found Cummins inside the paint, who earned the bucket and the foul. The sophomore converted the three-point play at the line—his second of the game—extending Harvard’s lead to 25-18.

The performance of the Crimson defense proved to be one of the biggest factors in the victory. Harvard forced 18 turnovers, while surrendering the ball just eight times. The Crimson capitalized on its opportunities, outscoring Dartmouth 24-4 in points off turnovers.

The victory over the Big Green marks the 17th consecutive win for Harvard at Lavietes. The Crimson will have to square up against Dartmouth again on the road in the back end of a lengthy home-and-home in two weeks.

“Nobody is going to fold down for us just because we’re picked to win it all,” Curry said. “Everybody’s going to bring their best shot…Every game is going to be a fight, and we see that. We got a taste of that today.”

—Staff writer Jake Meagher can be reached at jmeagher@college.harvard.edu.