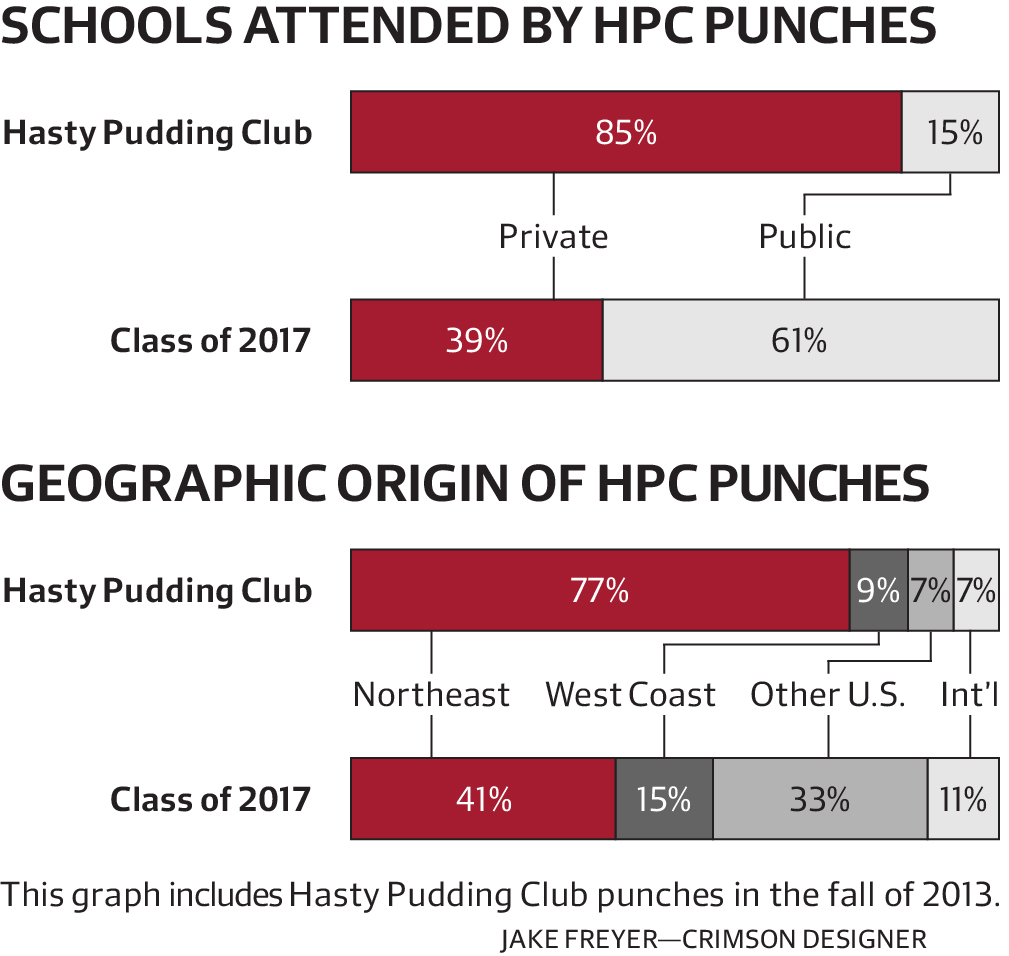 The HPC—also known as The Hasty Pudding Social Club—launched its fall member selection season three weeks ago. The club is famous for its ties to arts groups and its status as Harvard’s oldest affiliated social club.

Freshmen: Do not join this homogenous and elitist institution. The HPC may have been cool when John F. Kennedy ’40 and Franklin D. Roosevelt, Class of 1903, were hanging around the clubhouse, but they graduated before segregation ended and before financial aid was introduced.

I was given a list of last fall's Pudding “punch” class from a member of the HPC (that member is being allowed anonymity because the list is meant to be confidential). The “punch” class corresponds to a pledge class at a fraternity or sorority and includes the people likely to join the club.  The list includes punches’ hometowns and high schools. Crimson editorial editors subsequently confirmed the validity of the list with another member of the Club, as well as by reviewing screenshots of a document that was shared with club members. Cross-referencing that list with data from The Crimson’s 2017 “Freshman Survey” yields the accompanying graphs.

The data speak for themselves. The club caters to a tiny slice of the larger Harvard population, creating an atmosphere nearly devoid of the diversity essential to the undergraduate experience. To counter accusations of elitist bias, the HPC has in the past claimed to select members with a “certain strength of character.” That character is now clearly associated with Northeast prep school culture: of the 55 fall 2013 punches, 25 were from New York alone. Members met at private schools such as Horace Mann, Phillips Academy, Chapin, and Sidwell Friends (which President Obama’s children now attend). Social connections will undoubtedly play a part in any social club’s admissions, but it’s wrong if they perpetuate socioeconomic stratification. 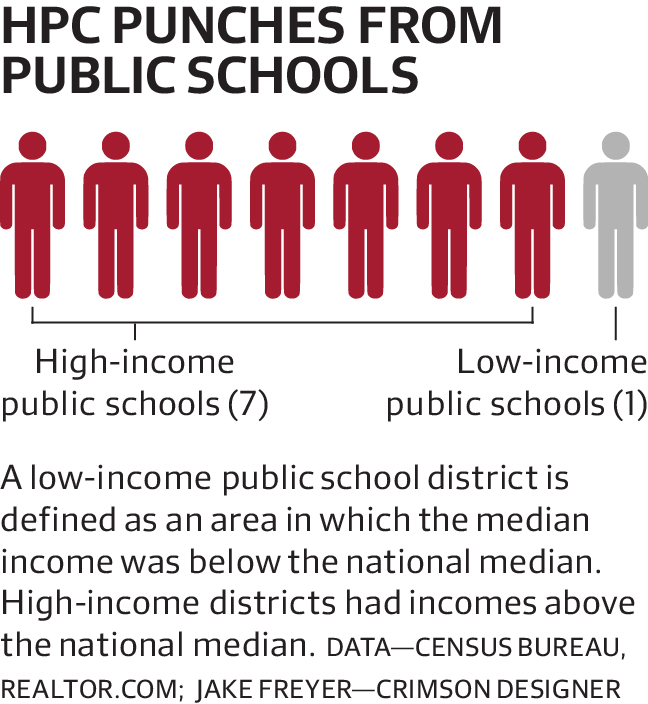 Of the eight remaining class of 2017 Pudding “punches” on the list who attended public school, only one student hailed from a community with a median income below the national household median, according to census data. The rest attended what could be called “pseudo-private” schools in communities where the median income is, on average, $130,668. Even if a couple of the listed students were on financial aid, the lopsided overall picture of the Pudding is overwhelming.

Equally troubling is the story behind the Pudding’s financial wealth. Andrew L. Farkas ’82—noted as a billionaire in “The Real Deal New York Real Estate News”—is part of a larger group listed on the Pudding website called “Guardians of the Sphinx,” a distinction for those who have donated at least $50,000 to the Hasty Pudding Institute. Other “guardians” include hedge fund manager Jeffrey Epstein (who in 2008 pleaded guilty to a charge of soliciting prostitution, and who has faced multiple civil actions alleging sexual assault of minors—many of which have been dismissed or settled), hedge fund manager James Dinan, and Chris Flowers ’79 (who worked in the finance industry). It is disturbing that these billionaires are funding a socially stratified institution that perpetuates many outdated stereotypes of the Harvard student.

Outdated institutions like the Pudding work against the environment Harvard seeks to cultivate. In an admissions video, Harvard claims to be a place “where anything could happen”—where students of all backgrounds collaborate together. The Pudding clashes with this ideal and has no place at Harvard and no place at all in this century.

And yet Harvard’s leaders continue to support the club.

At the opening of the new Pudding clubhouse on January 24, 2014, Harvard Dean of Freshmen Thomas A. Dingman ’67 and Dean of the Faculty of Arts and Sciences Michael D. Smith were in attendance. At the event, Smith noted his “admiration for everything Andrew [Farkas] does” and encouraged students to enjoy the new building.

It’s embarrassing that Harvard administrators associate with an organization whose unfair preference for elite Northeast prep school graduates is reminiscent of a bygone era. What does it say to tomorrow’s leaders when one regional and socio-economic group has Harvard’s stamp of approval to socialize in luxury to the exclusion of the rest of the university?

And why do so many students blindly accept the Pudding’s homogeneity? I admit that I come from a wealthy and well-connected white family, but that shouldn’t grant me a university-sponsored rich kid clique.

Part of the explanation for students’ ready acceptance of the Pudding is psychological. New neurological evidence suggests that cultural biases stem from the deep subconscious, which, according to a 2007 Princeton study, can process information up to 500,000 times faster than the conscious. Such subtle and uncontrollable bias leads humans to instinctively search for similarity. But college should be about pushing boundaries and exploration, not hiding in the hall of mirrors. This is Harvard, and graduates have proven time and again that they can bend history’s arc.

Harvard’s best excuse for its failure to dissociate from the Pudding is the club’s co-ed status. The HPC indeed successfully circumvents the gender divide associated with Greek life and final clubs. Harvard’s social scene undeniably isolates freshmen, especially given outdated 21-plus US drinking laws. In response, freshmen drink behind closed doors, and it’s easier to do so in exclusive social clubs with their own real estate. Fraternities and sororities, made up of one gender, are limiting, and the co-ed Pudding may seem appealing in contrast. But better, more diverse co-ed options should exist on campus.

The HPC’s issues are also obscured by the merit-driven selection systems of its affiliated performing arts groups, the Hasty Pudding Theatricals and the Harvard Krokodiloes. But the HPC doesn’t choose members based on performing talent. The club website’s current purposted justification based on “friendship”, “charity night”, and “service days” is ridiculous and hollow. The rudderless HPC falls very short of Harvard’s egalitarian vision of excellence.

It’s sad that a venerated college, one celebrated as a bastion of progressive thought, entrenches archaic socio-economic division. Harvard’s administration should help students to celebrate one another, not facilitate the formation of regional and class-based cliques that belong on the cover of tabloid newspapers, in high school rom-com dramas, or posh Harvard YouTube parodies.

There are three options available to Harvard: Continue association with the HPC and promote elitism and homogeneity; dissociate; or contact and put pressure on the club to catch up with the diversity of this century. President Faust, choose One Harvard united, not a Harvard divided.

An earlier version of this article incorrectly stated that the Hasty Pudding Social Club launched its fall member seleciton season two weeks ago . In fact, the season launched three weeks ago.