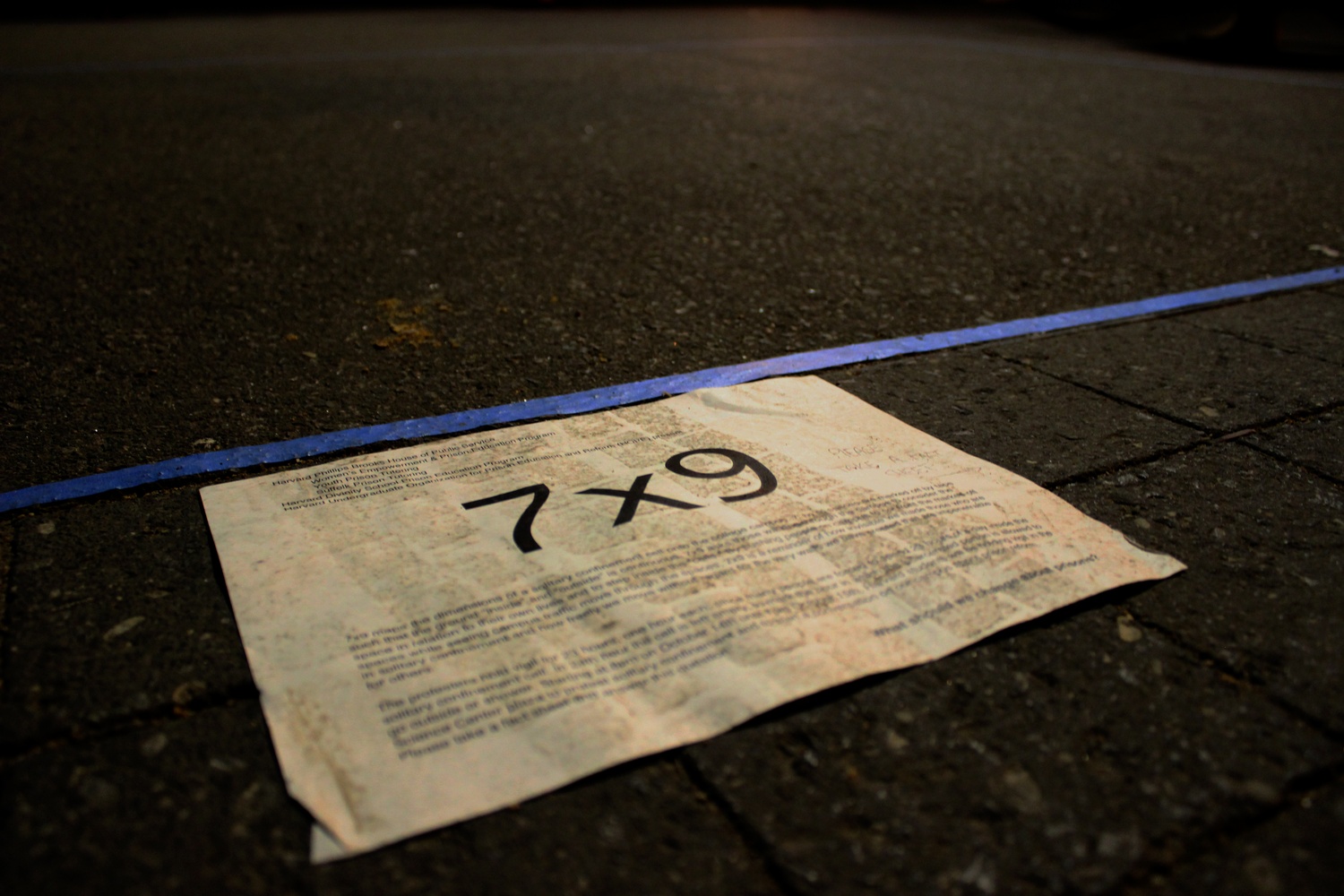 This 7 by 9 foot area in the Science Center Plaza designates the allocation of space given to those in solitary confinement in many penitentiaries. The space served as the site of a 23 hour long vigil between Tuesday and Wednesday in protest of current justice system policies. By Thomas W. Franck
By Nathan P. Press and Samuel E. Stone, Contributing Writers

Past midnight on Wednesday morning, Rachel P. Thompson ’16 sat outside the Science Center with nothing but an empty square of blue tape pasted on the ground behind her.

“What would you do to change the prison system?” asked the hand-drawn sign on an easel in front of her.

From 9 p.m. on Tuesday until 8:00 p.m. on Wednesday, Thompson and around 20 other students took shifts sitting beside a seven-by-nine-foot box, which represented a prison cell, as part of a vigil for prisoners held in solitary confinement.

The student vigil, which was called 7x9, lasted for over 22 hours, including the few hours demonstrators were forced to move inside the Science Center beginning at 1:00 a.m. to avoid paying for security on the plaza.

The box was designed to mirror the size of the average solitary cell, according to Student Alliance for Prison Reform, a national network of college students that aims to raise awareness and public discourse on prison conditions.

The movement began at Princeton, and seven other campuses participated in the event Wednesday.

“At other schools they’ll have a student standing in the box and not saying anything,” Thompson said. “But we wanted to make it more like a vigil, standing in solidarity but not trying to replicate an experience we’ve never had.”

“When people are in solitary confinement, they are rendered in complete isolation in the cell for 22 to 24 hours of the day,” Shang said. “There is little or no access to rehabilitative or education programming and grossly inadequate medical and mental health treatment.”

Shang also cited that nearly 50 percent of prison suicides occur among the 4 percent of the U.S. prison population currently in solitary confinement.

Both Thompson and Shang have worked with prisoners in the Cambridge community through educational programs and said they tried to leverage their experiences when planning the demonstration.

“We’ve had input from prisoners who have been directly affected,” Thompson said. “We don’t want to speak for people whose voices have been silenced. We want to give them the platform so they can speak for themselves.”

Shang and other 7x9 organizers on campus are currently working with the American Civil Liberties Union of Massachusetts, as well as Solitary Watch and the Stop Mass Incarceration Network, to form a broader movement for prison reform.

“In the public sphere, we hope to send a signal to the world that college students around the country care about human rights abuses,” Shang said.

By Wednesday afternoon, sheets of easel paper in front of the blue tape rectangle were filled with multi-colored suggestions for prison reform from students and local community members alike.

An earlier version of this article incorrectly stated the number of protesters who took part in the daylong demonstration. In fact, there were 21.

An earlier version of this article also incorrectly identified the national alliance of college students that aims to raise awareness and public discourse on prison conditions. In fact, it is the Student Alliance for Prison Reform.