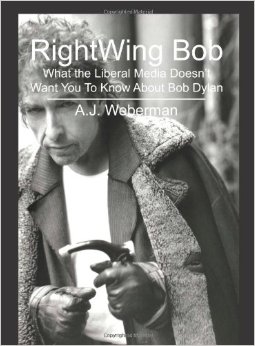 Dylan as an insidious Fascist in "RightWing Bob"
By Sonya A. Karabel, Contributing Writer

Every once in a while, books exec Grace E. Huckins ’16 is sent a novel so bizarre and counterfactual that the only place it can possibly belong is in the Arts Blog. Here, we examine the king of these strange books, Yippie gadfly A.J. Weberman’s 2009 masterpiece “RightWing Bob.”

Ted Nugent, Kid Rock, Lynyrd Skynyrd—outside of these colorful examples, conservative rock stars are few and far in between. However, according to “RightWing Bob,” there are more Republican rapscallions lurking under the surface of the rock establishment.

In this 666-page tome, Weberman exposes “what the liberal media doesn’t want you to know about Bob Dylan”—that he’s a right-wing extremist. According to Weberman, Dylan has hidden messages in all of his songs that show his true, extremely reactionary feelings on issues from civil rights to communism to the Israel-Palestine conflict. For fans of those YouTube videos where they play Beyoncé songs backwards and explain the Illuminati references (hint: when it doesn’t sound like words, it’s “demonic chanting”) this is a great read.

Weberman declares himself the “world’s only living Dylanologist.” Where did he acquire this encyclopaedic knowledge? His introductory chapter, “My Unique Credentials as a Dylanologist,”  is littered with name-drops of infamous celebrities he was remotely associated with and stories of every drug he’s ever done. Weberman explains how, starting in the 1970s, he looked through Dylan’s garbage and argues that he was the first “muckraking journalist” to use this “method of investigation.” However, this groundbreaking technique is nothing without Weberman’s poetic analysis.

Weberman assigns chapters for more than 200 of Dylan’s most famous songs and provides line-by-line evidence of the artist’s arch-conservatism. Here are some of the author’s choicest breakdowns:

-”How many years can a mountain exist” (Blowing in the Wind)

What Weberman thinks Dylan means: “How much longer can the mountainous problem of the Negro [sic] be allowed to exist?”

What Weberman thinks Dylan means: “She has no regrets about what happened to artists during the McCarthy era.”

-”May you build a ladder to the stars” (Forever Young)

What Weberman thinks Dylan means: “May you create a part of the American economy where you are free to reach for the stars.”

-”You must leave now” (It’s All Over Now Baby Blue)

Thanks for clearing up these ambiguous meanings, A.J.!

Weberman’s own beliefs are one of the most intriguing things about the book. Though he is determined to convince us that Bob Dylan was ideologically on the far Right, he seems to be a leftist with regards to social programs and drug legalization. However, he doesn’t mind filling his translations with racist tirades or adding tidbits like “Dylan was having sexual relations with more sexual partners than a Muslim would have if he reached heaven.” Weberman comes off an awful lot like the Dylan he criticizes. Despite all the hate, he claims that he and Dylan were friends and that “the Dylan-Weberman...relationship is the legend that poems are made of,” even noting that in a phone conversation “Dylan said he was going to write a poem about me entitled ‘Pig.’ That may not seem like the most positive title, but you just don’t understand the beauty of a friendship based around digging in someone’s trash.