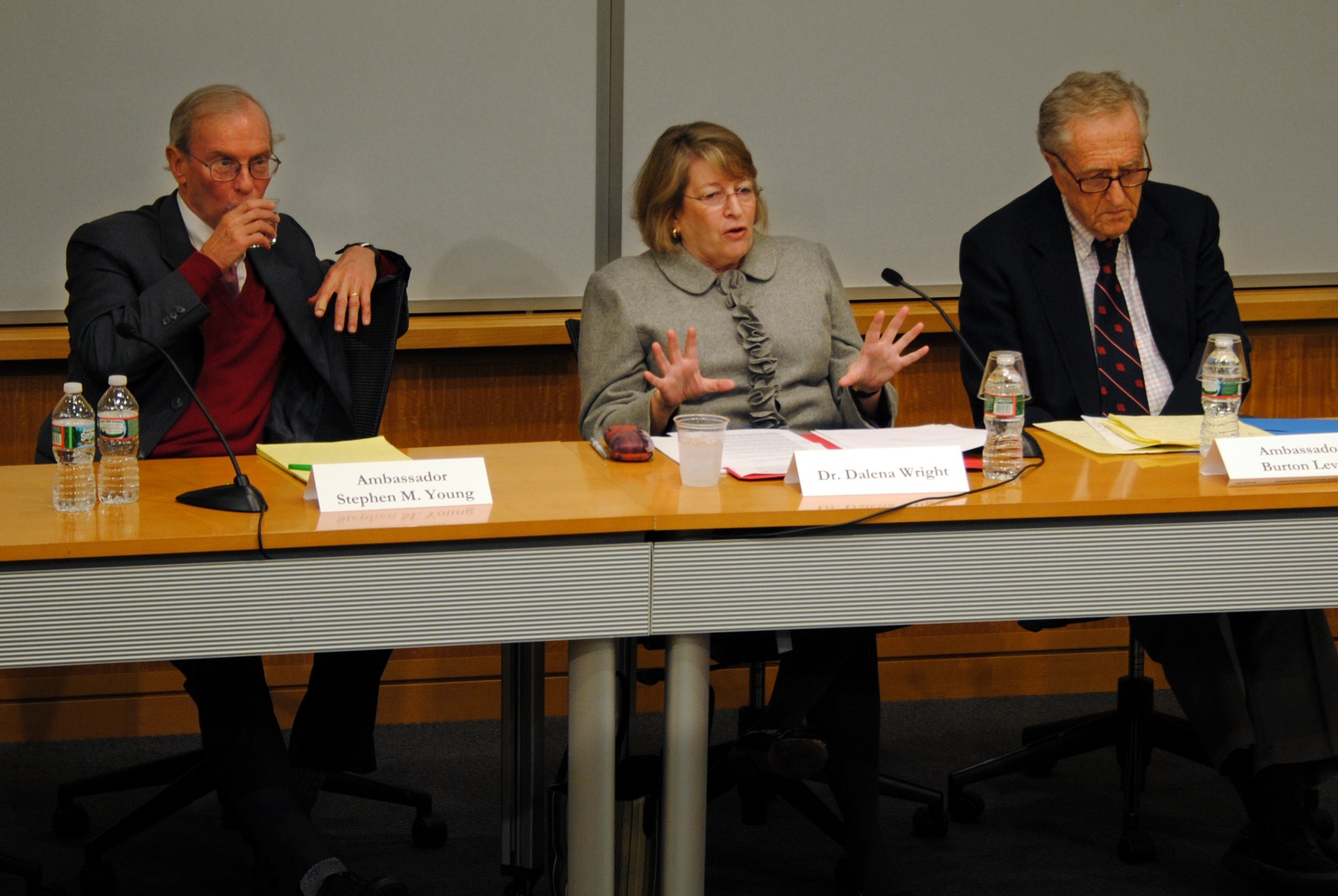 Dalena Wright, center, senior fellow at the Ash Center, speaks at the event "Hong Kong: Origins of the Crisis" in CGIS-South on Wednesday. By Tiana A Abdulmassih
By Kay Lu, Contributing Writer

A panel of scholars and former U.S. diplomats argued that the current conflict in Hong Kong has historical roots during a seminar Wednesday afternoon.

The event was part of the weekly seminar series, entitled “Critical Issues Confronting China,” which was initiated in the fall of 2013.

Dalena Wright, a senior fellow at the Kennedy School of Government's Ash Center for Democratic Governance, gave a historical analysis of Hong Kong since colonial times, mentioning that conflicting interpretations of the Sino-British Joint Declaration of 1984 were partially responsible for the confusion in Hong Kong today.

Burton Levin, a visiting professor at Carleton College and a former U.S. consul general in Hong Kong, talked about how he witnessed the transformation of political life in Hong Kong.

Levin said that although “there was no political life” in Hong Kong back in 1955, Hong Kong now enjoys greater freedom and civil rights.

“It is essentially a free society, but not a democratic society,” Levin said.

He added that the prevalent animosity in Hong Kong could help illuminate other modern conflicts.

Levin also mentioned that unfriendly relations between citizens of Hong Kong and mainland China has become a troublesome problem.

“There is a very serious growing antagonism toward mainland Chinese,” he said.

Stephen M. Young, former U.S. consul general in Hong Kong and the former director of the American Institute in Taiwan, talked about the future of Hong Kong.

“I do think that there is going to be an ongoing struggle [between Hong Kong and mainland China],” Young said.

Sociology professor Ezra F. Vogel, a co-organizer of the seminar, spoke after the event about what he hopes the weekly seminars will achieve.

“The purpose [of the seminars] is to provide the Harvard community a general picture of what issues China is facing and to inform them to keep up with current issues of China,” he said.

An earlier version of this article misquoted Dalena Wright, a senior fellow at the Kennedy School of Government's Ash Center for Democratic Governance. The misquotation of Wright has been removed from the article and replaced with a paraphrased version of her remarks. The article also incorrectly stated that Wright said Sino-British Joint Declaration of 1984 lacked clarity. In fact, Wright said that conflicting interpretations of the Declaration led to a lack of clarity, not the language of the document itself. Finally, the article incorrectly stated that foreign intervention has contributed to political and social disputes in the region. In fact, Wright said that Chinese worries about potential foreign intervention in Hong Kong has no basis.