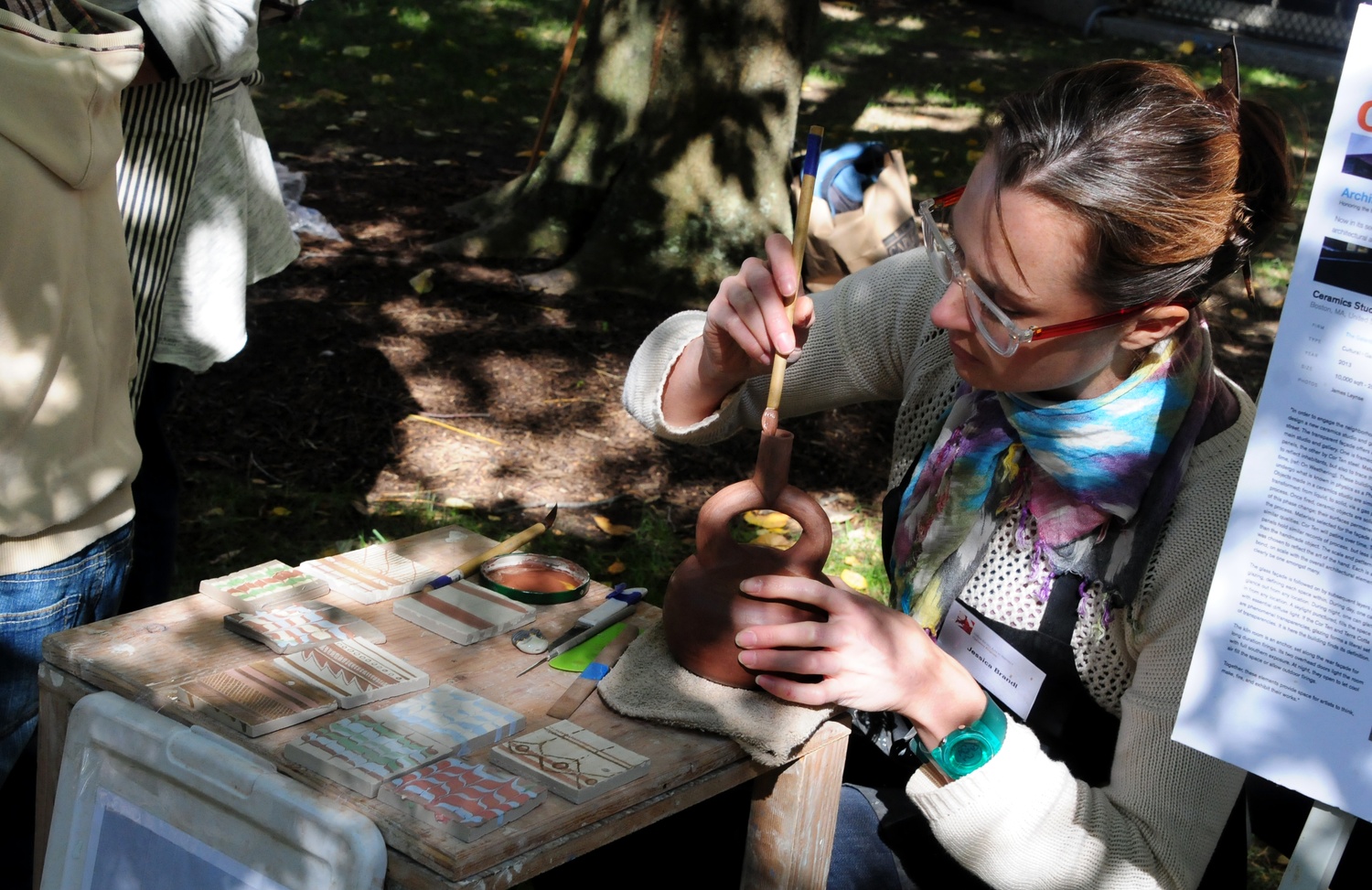 OFA Artist-in-Residence Jessica A. Brandl touches up a clay vessel at the archaeology fair was held by the Peabody Museum and the Semitic Museum on Oct. 5. By Evgenia M Nitishinskaya
By Samuel E. Stone, Contributing Writer

Students, faculty members, and visitors dug in Harvard Yard and took a three-dimensional virtual reality tour of famous monuments in Giza, Egypt, among other activities, at the Amazing Archaeology Fair on Sunday.

The Peabody Museum of Archaeology and Ethnology and the Harvard Semitic Museum hosted the event, which aimed to better engage the community with archaeology. According to Peabody Museum education manager Polly R. Hubbard, the fair fulfilled multiple goals.

“First, in October in Massachusetts it’s archaeology month, so all archaeology folk are seeking to promote their discipline,” she said. “Second, it’s nice to have the public come in and meet with students and professors to talk about what is going on in the field.”

Along Divinity Ave., where both museums sit, students and volunteers staffed booths filled with 17th century relics from Harvard, with presenters explaining the construction and purpose of various artifacts to visitors.

Fair visitors also had the opportunity to watch and play the Mesoamerican ballgame, considered to be the first team sport in history, in front of the Peabody Museum.

“It’s a recreation, and because the game was played for thousands of years and there were many iterations and versions, we creatively interpreted the game’s rules,” Hubbard said of the ballgame.

In the Yard, in front of Matthews Hall, visitors unearthed buried items where Harvard’s Indian College, the Yard’s first brick building, once stood. Diana Loren, the Peabody Museum’s director of academic partnerships and a co-instructor of Anthropology 1130: “Archaeology of Harvard Yard," administered the dig and explained its purpose. 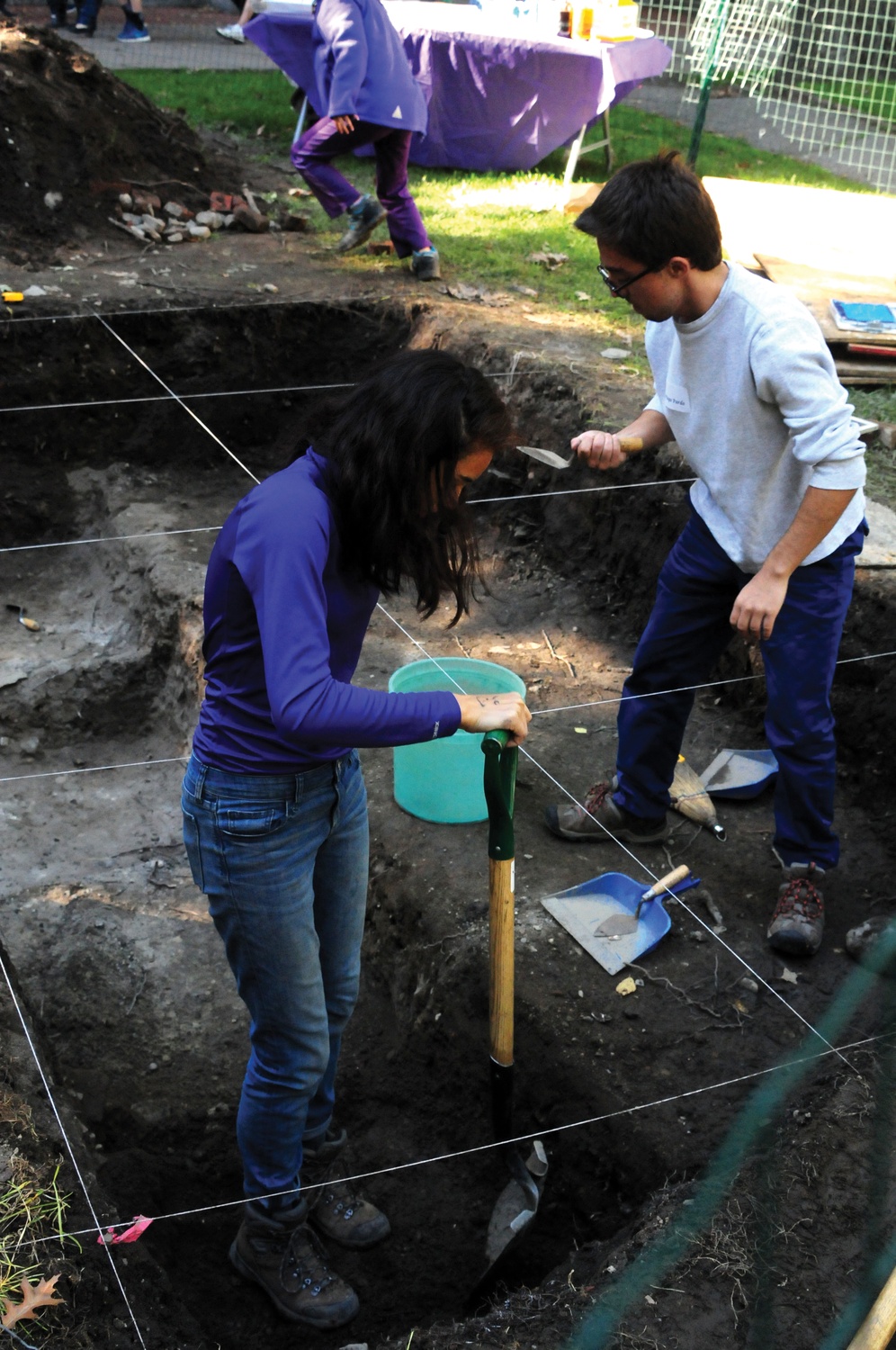 Cristina S. Parajon '18 and Santiago Pardo '16 dig for buried artifacts in Harvard Yard on Sunday, during the archaeology fair hosted by the Peabody Museum and the Semitic Museum. By Evgenia M Nitishinskaya

“We recover artifacts from each period of history in different layers,” Loren said. “Approximately four and a half feet below the surface, we find artifacts from the 17th century. The paths that people walked on in the Yard are pretty consistent throughout history, so we find trash everywhere along the paths.”

On the dig site, bottle fragments and smoking pipes were some of the most commonly uncovered artifacts.

“There was a fair bit of breaking the rules because College laws were pretty restrictive about social behavior like smoking and drinking in the 17th and 18th centuries,” Loren said. “With archaeology, you get a different sense of the day-to-day life of students.”

Jenni Acosta, a volunteer at the Peabody Museum, joked about the comparison between smoking during Harvard’s early years and the recently implemented ban on smoking in Harvard Yard.

“Smoking was against the rules back then for religious reasons instead of health ones, but I hope students today break the rule less than we know students in the 17th century did,” Acosta said.