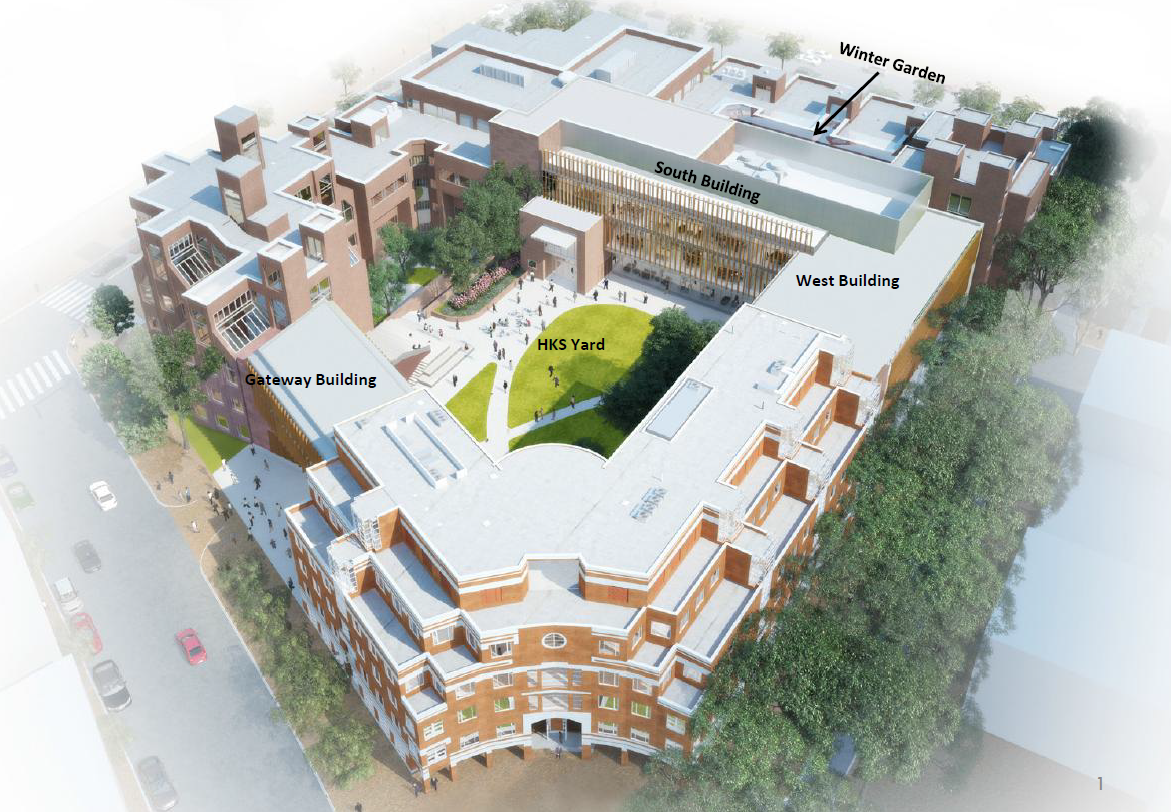 The Kennedy School of Government has submitted preliminary plans to the City of Cambridge for a dramatic remodeling of its physical campus, including the addition of 77,000 square feet of new building space, that school leaders hope will complement ongoing changes to pedagogy and interdisciplinary research.

The plans are set to go before the city’s planning board during a hearing on Tuesday. If approved, construction on the more than $100 million dollar project would likely begin following Commencement and aims to be completed by Jan. 2018, according to the Kennedy School’s executive dean, John Haigh.

Including three new buildings and the elevation of the school’s current courtyard, the project looks to be one of the largest capital expansions on Harvard’s Cambridge campus in recent history and will increase the school’s current square footage by more than 30 percent.

The school is currently is comprised of two main structures: the Belfer, Littauer, and Rubenstein buildings, which are all adjoined, and date from the 1970s and 1980s; and the separate Taubman building, which was completed in 1990. Under the current plans, the two structures would be adjoined, as a new “Gateway” building would connect Taubman to Belfer, a “West” building on the site of the school’s current parking lot would connect Rubenstein to Taubman, and a “South” building would connect Littauer to the new “West” building.

Among other additions, there will be six new classrooms, a student lounge and study area, a new dining area and event space, a conference room above the dining room, a winter garden atrium, and a flexible common space that HKS officials refer to as “skunk works.” 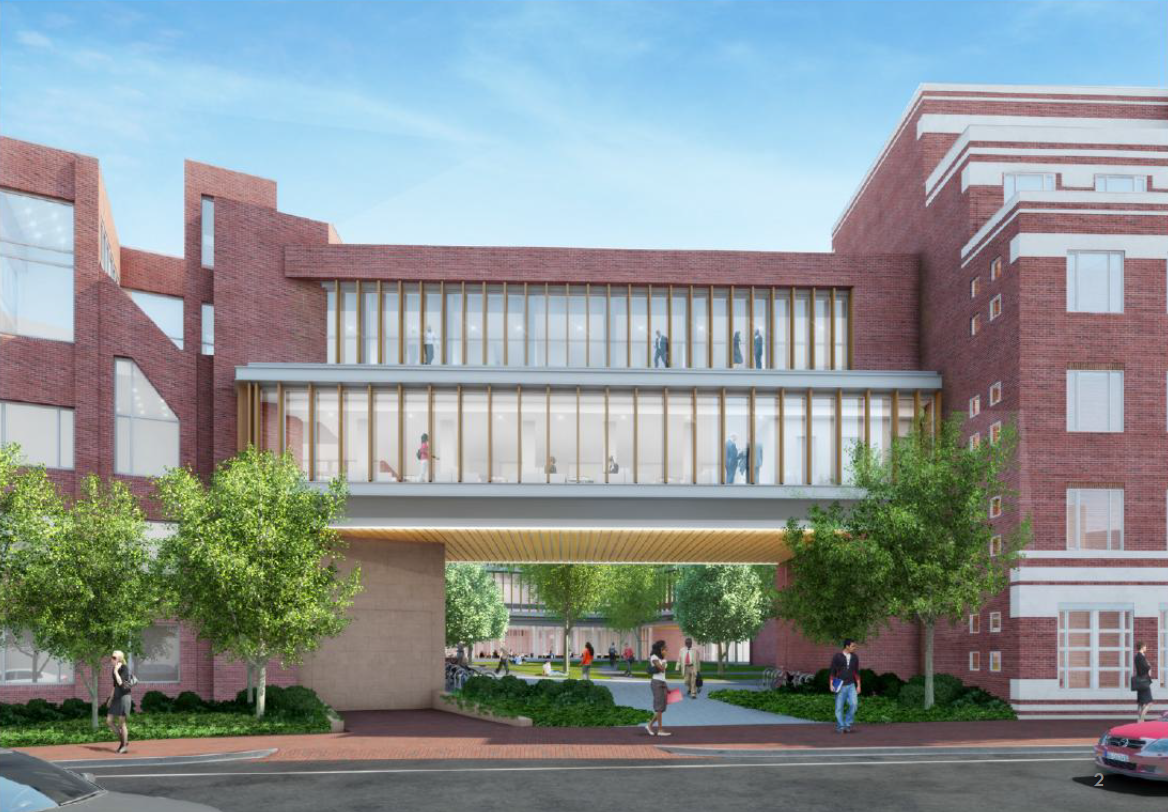 By Courtesy of the Harvard Kennedy School

The building plans are a major component of the Kennedy School’s $500 million capital campaign, which made “creating a campus that amplifies our mission,” one of its four priorities. As of late August, the school has raised $355 million in gifts and pledges, according to Kennedy School spokesperson Doug Gavel.

“We need to have a campus that amplifies, magnifies, and supports our mission and strategy,” Haigh said in an interview on Friday.

HKS Dean David T. Ellwood ’75 told The Crimson in September that the school’s current classroom setup is designed for lecturing and discourages group discussion and collaboration. The remodeled campus will aim to remedy that.

“If we want to get to a place where we do teaching and really help people change the world, if we want to fundamentally reshape the future of ideas and the like, we have to do more,” Ellwood said. “And we also have to have flexible space where people can do things, create new innovative ideas, and do the sorts of social entrepreneurship that people are doing, and the like.”

Haigh said that a “large percentage” of the total cost of expansion has already been secured. 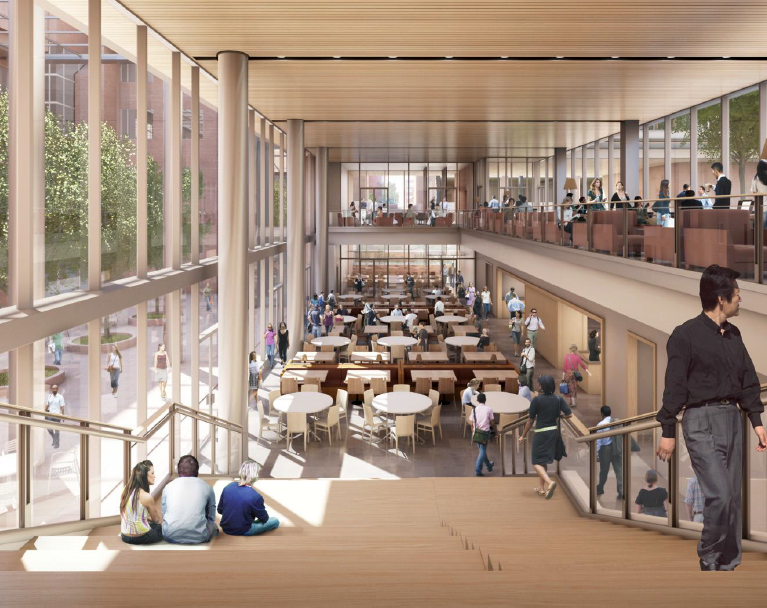 By Courtesy of the Harvard Kennedy School

“Even though we’ve got a significant percentage already covered in philanthropy, there are still a few pieces that are to be named or to be supported. We’re having conversations about those with donors now,” Haigh said.

In addition to the three new buildings, the current courtyard will be elevated by one story to the level of Eliot St., which will enable functions like service delivery and safe dignitary arrival to occur under the courtyard.

Thomas J. Lucey, director of University relations with the city, said the aesthetics and practicality of a raised courtyard benefit the community beyond just Kennedy School students.

“Raising the courtyard is a huge win for the community,” Lucey said. “The height, the scale, the density, the design approach, really fits right in with both the existing campus and the surrounding neighborhood.”

The school will use space in the One Brattle Square building as temporary swing classrooms and offices during the construction period.

Despite the significant expansion in campus size, Haigh emphasized that HKS will not be expanding its student population and all faculty hiring can be attributed to separate capital campaign goals, not directly a result of new space.

“I am excited about the development of a modern learning environment that will enable the School to enhance and strengthen teaching and research, and I am confident that the transformation set out in the proposed design will be nothing short of extraordinary,” Faust wrote.