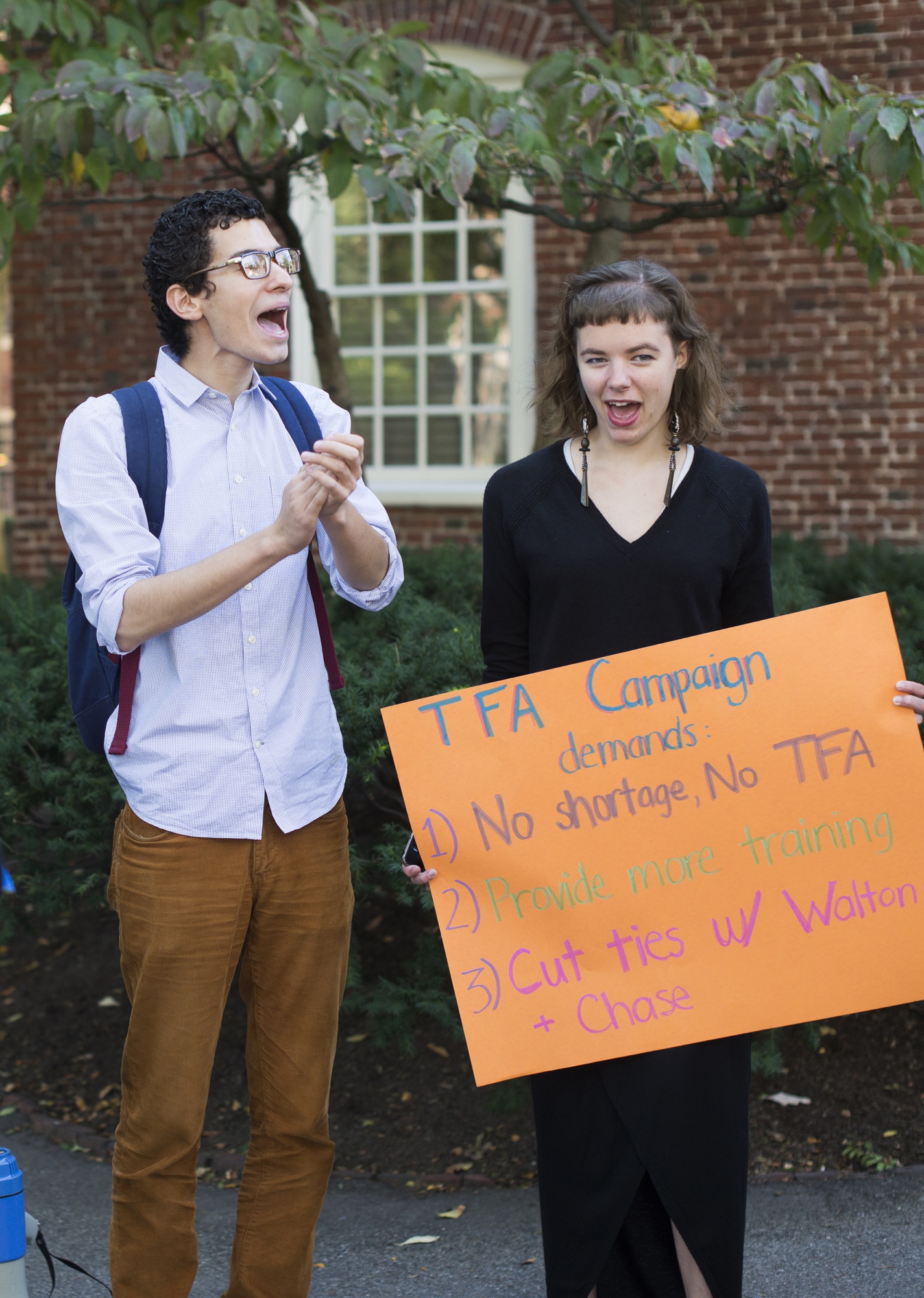 Teach For America co-CEO Matthew Kramer ’98 defended his organization on Wednesday, arguing that accusations by Harvard student protesters that TFA’s teachers are unprepared and its corporate backing is unjust are misguided.

Kramer’s remarks came in response to a Student Labor Action Movement protest on Sept. 26 in which a dozen group members delivered a letter to University President Drew G. Faust imploring Harvard to cut ties with TFA, a nation-wide program that recruits college graduates to teach in low-income communities, if it did not enact certain changes by Oct. 8.

That effort is part of a larger national movement started by United Students Against Sweatshops criticizing TFA for allegedly undermining the quality of public education. Student activists are demanding the program make three changes: only send teachers to areas in which there is a teaching shortage, provide corps members more education and training, and cut ties with corporations the students deem socially unjust, like Exxon Mobil and JP Morgan Chase.

In a phone interview on Wednesday afternoon, Kramer responded to these concerns, saying it was “disappointing” that Harvard students were calling for the University to cut ties with TFA.

“That this group would get involved in asking President Faust to kick us off campus is essentially deciding that they don’t think other Harvard students should be able to learn about Teach For America and the field of education,” Kramer, a former Crimson Business Manager, said. “I think that’s against the core values of Harvard to cut off access to information.”

Specifically, Kramer argued that though TFA teachers only receive five weeks of intensive training before they enter the classroom, the organization invests in extensive supportive coaching during the two years corps members serve. Kramer also cited efforts TFA is making to increase teacher preparedness, such as a pilot program that allows college juniors who have been accepted into the program early to take educational classes in their senior year. 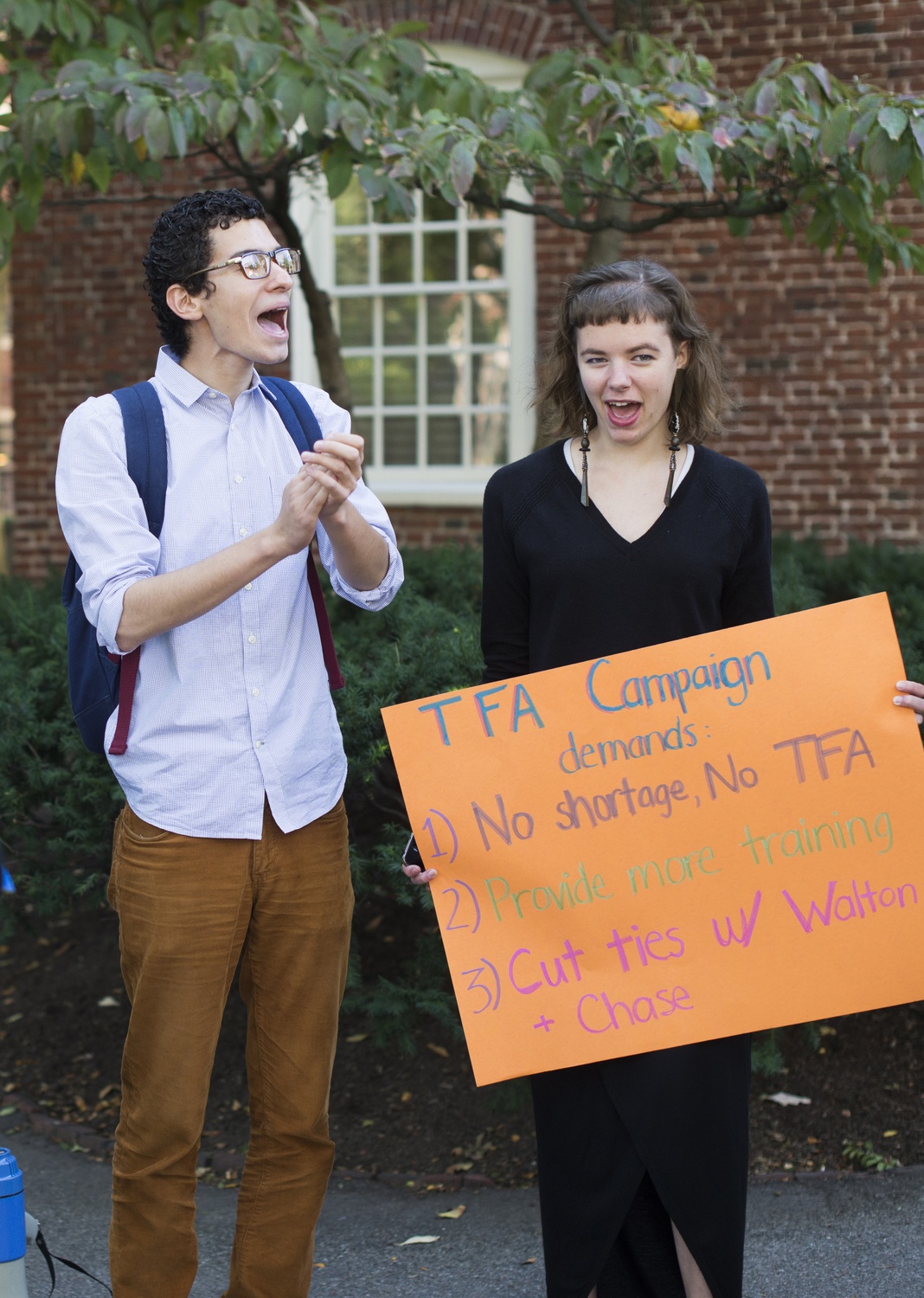 Addressing concerns about corporate support, Kramer said that TFA relies on corporate donations only in order to strengthen programs.

“We wouldn’t take money from an organization if [we] thought by taking money we would cause anything bad to happen,” Kramer said. “If people give us money to do our work, then we think the right thing to do is to do our work the very best we can.”

Though Harvard has appeared to take no action to address SLAM’s demands, SLAM pledges to amp up its campaign. On Wednesday, SLAM and USAS members wrote a letter back to Kramer, as well as TFA’s co-CEO Elisa Villanueva Beard and founder Wendy Kopp, standing by its accusations and requesting a national meeting with TFA leadership within the next month.

The letter makes the claim that there is no longer a national teaching shortage, which TFA was originally created to fill, and implored TFA to stop sending corps members to communities that do not have teaching shortages. The letter also alleges that TFA inflated statistics about how many of its alumni work in education or low-income communities when their service is up.

Kramer, for his part, argues that talent shortages continue to exist in every low-income neighborhood in America and that TFA only sends teachers where they are requested.

SLAM also plans to hold a “Teach For America Truth Tour” event on Friday featuring a panel of TFA and Harvard alumni to discuss the future of the program and American education. Last year, 29 graduates of the College joined TFA, according to TFA recruiter Tess Nicholson.