Computer Science Faculty To Increase by 50 Percent with Ballmer Gift

Donation Likely Around $60 Million for 12 Professorships 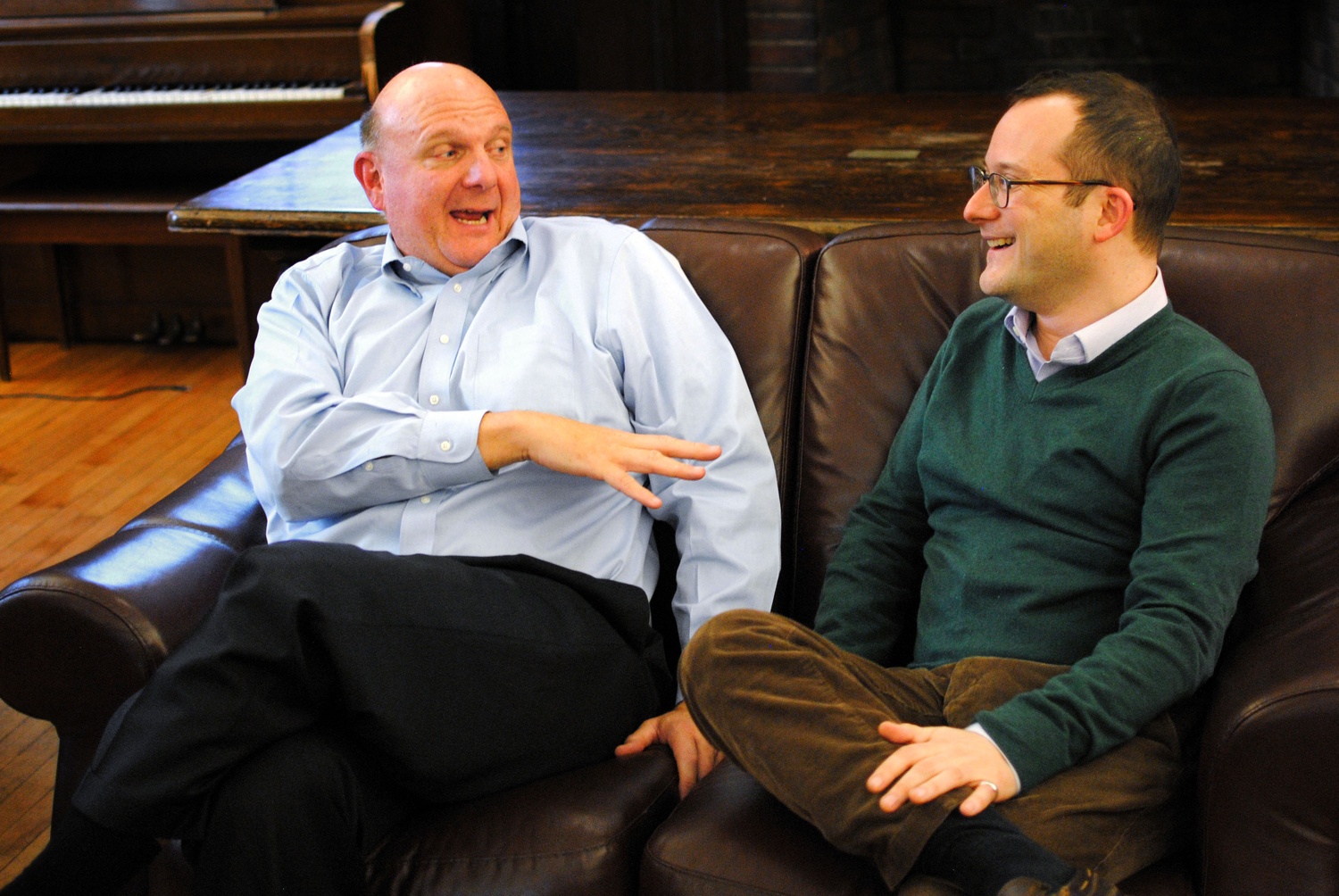 Former Microsoft CEO Steve A. Ballmer '77, left, jokes with with Harvard Computer Science Area Dean David C. Parkes during an interview with The Crimson on Wednesday regarding his donation to the computer science division. By Tiana A Abdulmassih
By Matthew Q. Clarida and Amna H. Hashmi, Crimson Staff Writers

Harvard’s computer science faculty will grow by 50 percent, or 12 professorships, following a gift from former Microsoft CEO Steven A. Ballmer ’77. Ballmer did not specify the size of the gift.

“I believe in Harvard,” Ballmer said in an interview on Wednesday. “I went to school here and I love the place, and I believe in the power of technology to make a difference.”

Ballmer said that he is “all in” with his support for the faculty expansion, but he declined to specify the value of the donation. Generally, Harvard professorships cost about $5 million to endow, and when prompted as to whether a $60 million gift was an appropriate ballpark figure, Ballmer said that the arithmetic was “pretty good.”

The money, whatever the exact amount, comes with a clear and explicit ambition.

“Right now I think everybody would agree that MIT, Stanford, and Carnegie Mellon are the top places [for computer science],” Ballmer said, adding that some would also include the University of California at Berkeley. “I want Harvard on that list.”

At an event celebrating the gift hosted at the Harvard Innovation Lab Thursday afternoon, Ballmer told a crowd of hundreds of students, administrators, and nearly every member of the Computer Science faculty that the University’s leadership in computer science is “fundamental” to its continued leadership in higher education.

“Steve likes to win,” University Provost Alan M. Garber ’76, who referred to Balmer as an “old friend,” said after the event.

School of Engineering and Applied Sciences Dean Cherry A. Murray said in 2013 that she expected the School’s faculty to grow roughly 30 percent in coming years as significant portions of the school, including computer science, move to Allston. The computer science division currently counts 24 professors. 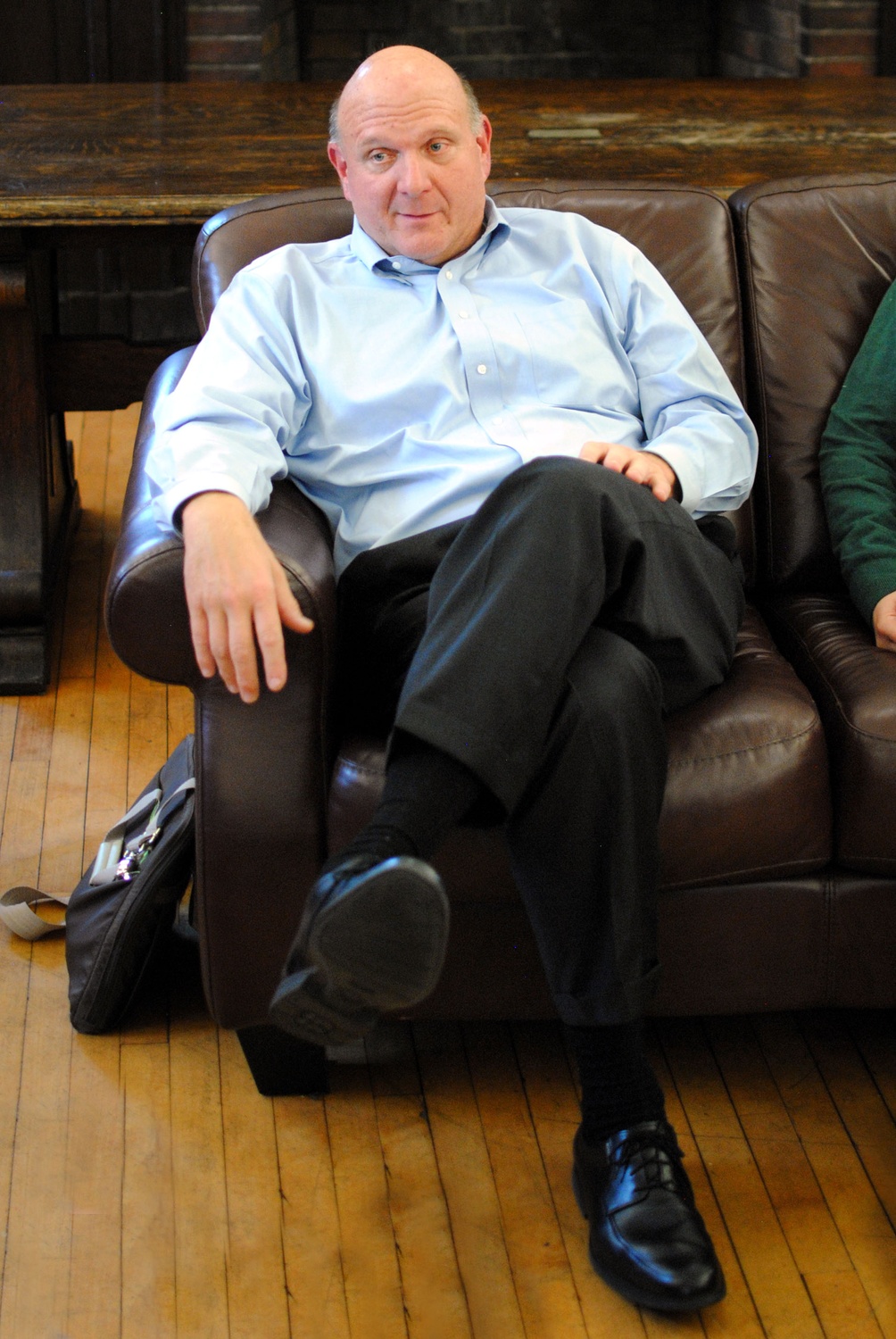 Former Microsoft CEO Steve A. Ballmer '77 discusses his donation to the computer science division during an interview on Wednesday. Ballmer was also a guest lecturer for CS50 this week. By Tiana A Abdulmassih

“The field is at an inflection point. We’ve been working on problems that are in a sense about what computers are—how to code computers, how to get them to work well,” said David C. Parkes, area dean for Computer Science. “We’re at a point now where the field is affecting every other field. This is what we mean by the outward-facing aspect of what computer science is.”

Faced with increasing numbers of instructors and concentrators, administrators and faculty members at SEAS have said they are concerned about space availability in the years before the Allston move. Parkes said that space constraints will limit the department’s hiring timeline following the gift.

Still, at the Thursday celebration, Ballmer urged University members to “get moving” in the expansion and called on other donors to join the effort.

“Things around Harvard move at a Harvard pace. That’s not glacially, but not exactly as I said the speed of the technology industry either,” Ballmer said. “There’s still a lot of money to be raised. I don’t want any buildings to be the constraint for the growth of computer science. Gotta move, gotta get Allston built.... This can’t be mañana, mañana, mañana.”

Still, on Wednesday, the notoriously energetic Ballmer could not contain his excitement, pounding the arm of an armchair for emphasis and jumping out of his seat in enthusiasm at least once.

“When I was a senior, they asked four of us to run the fundraising efforts for the class of ’77,” he said. “I’ve been on my class committee since 1977, continuous service. I’ve been a friend of Harvard since the day I graduated.”

It has been a busy year for Ballmer, who recently spent $2 billion to buy the Los Angeles Clippers basketball franchise, but this donation has long been in the works, he said Wednesday. Ballmer said that he met with University President Drew G. Faust and Harvard Corporation member James F. Rothenberg ’68 the day he retired from Microsoft this February. Ballmer came to Cambridge that same month at the invitation of Faust and Rothenberg, touring Allston with University Provost Alan M. Garber ’76 and meeting with a number of faculty members.

Ballmer, who was a Crimson business editor during his time at Harvard, also had breakfast during the trip with Parkes. That meal, as well as a conversation with Murray, served as the primary impetus for the eventual gift, Ballmer said. He and Parkes agreed that the expansion aims to achieve “excellence in scale.”

“With quantity comes the ability to span new areas and not abandon all areas that are currently of interest,” Ballmer said. “I became convinced talking to David [Parkes] and Cherry [A. Murray] that scale was part of excellence. Harvard really did have the will and the determination, and Drew [Faust] had the will and determination.”

Ballmer added that even Maxwell Dworkin, the engineering building that he and Microsoft founder Bill Gates funded with a $25 million gift in 1996, is now overcrowded and dated, indicating the field’s rapid expansion.

“It is a little bizarre. It’s pretty new, and yet full and a little out of date,” Ballmer said of Maxwell Dworkin during Wednesday’s interview. “It’s just a huge demand whether it’s at Harvard or the rest of the nation that we’re seeing.”

“Steve’s energy in this challenge will really galvanize us to do what he has set forth, which is to deepen, widen, and grow the computer science department in ways that can make it a leader for Harvard and a leader in the world,” Faust said.

Harvard communications official Patrick S. McKiernan also attended the interview, which was granted on the condition that The Crimson not publish its contents until Nov. 13.

—Staff writer Amna H. Hashmi can be reached at amna.hashmi@thecrimson.com. Follow her on Twitter@amna_hashmi.