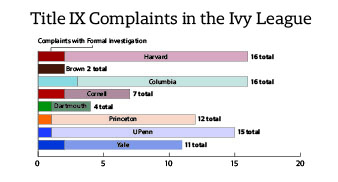 A Department of Education investigation into Harvard’s response to a sexual harassment case at the Medical School led the school to change how it handled such allegations in 2008, according to federal documents recently obtained through a Freedom of Information Act request.

The investigation, which was previously unreported, came in response to one of at least 18 Title IX complaints filed against Harvard and reviewed by the Department of Education’s Office for Civil Rights since 2002. A Crimson review of federal documents released by OCR in response to a FOIA request found that most of those complaints did not lead to full federal investigations into Harvard’s compliance with Title IX, an anti-sex discrimination law; two, against the College and the Law School, prompted investigations that remain ongoing.

The set of OCR documents details the outcomes of more than 7,500 Title IX complaints received and closed by the federal office between Jan. 1, 2002 and Sept. 22, 2014. Among Ivy League schools, Harvard and Columbia saw the most complaints during this time period, with 16 closed complaints each.

Complaints filed with OCR that actually lead to changes in policies are relatively rare. According to the documents, OCR closes and dismisses a significant majority of Title IX complaints against schools even before they reach the investigatory stage. Of the 83 complaints filed against Ivy League schools after Jan. 1, 2002 and closed by Sept. 22, 2014, 14 prompted OCR to open formal investigations, but only two yielded policy changes. That number does not include any ongoing cases.

The 2008 probe at Harvard Medical School is the only closed case that prompted the University to change its policies during this time period.

The speedy resolution of the case, in which Harvard voluntarily changed its procedures to expedite the grievance process just months after OCR launched its investigation, stands in contrast to the years-long probe at Harvard Law School, which the government opened in response to a complaint filed in 2010.

The 2008 case involved a female student’s allegation that the Medical School had failed to adequately respond to her sexual harassment complaint against a faculty member. According to letters that OCR sent to University officials regarding the investigation, the student alleged that it took Harvard close to two years to investigate her case and an additional 10 months for Harvard to make a final decision on her subsequent appeal.

The complainant alleged that she was harassed and assaulted by an assistant professor while she worked in his Harvard Medical School laboratory as an undergraduate, according to her March 2008 letter to OCR. In particular, the complainant took issue with Harvard’s response to her allegation of harassment and claimed that Harvard had inappropriately returned a handful of intimate photographs to the professor against the recommendations of the Medical School’s faculty grievance panel.

The names of both the complainant and the accused professor are redacted in the copy of the complaint released by OCR.

Just a month after receiving the complaint, OCR informed University President Drew G. Faust in an April 2008 letter that it had launched an investigation into whether Harvard had “failed to respond promptly” to the sexual harassment complaint. OCR then requested that Harvard provide the office with a copy of the student’s original complaint, a “detailed description” of how the University responded to that complaint, and information about Harvard’s policies and procedures governing sexual assault and harassment.

OCR ultimately closed its investigation in Aug. 2008, after Harvard agreed to adjust its policies to resolve the issue. Specifically, in an Aug. 2008 letter, Ellen F. Berkman ’86 of Harvard’s Office of the General Counsel informed OCR investigators that the Medical School and the School of Dental Medicine would change their procedures to resolve the complaint. Among other points, Berkman wrote that Harvard was committed to changing the two schools’ formal complaint procedure. Such sexual harassment complaints would go to a three-person faculty grievance panel and would be resolved within six months after the accused party responded to the initial complaint.

According to a letter informing Faust of the case’s closure, OCR had interviewed “key administrators” involved in the implementation of Harvard’s grievance process as part of the investigation. Throughout the interview process, legal counsel “expressed an interest in resolving the complaint,” according to the letter, because while Harvard “believed that its grievance process was extremely thorough and fair, it had already evaluated the procedure and was looking into possible changes that could be implemented to make the process more prompt.”

Gina Vild, a Medical School spokesperson, confirmed that the school changed its policies in 2008 in response to the Title IX investigation. The school’s faculty council approved the current procedures in Nov. 2008, which still apply to complaints against faculty members today.