Tribute to a Prose Poet 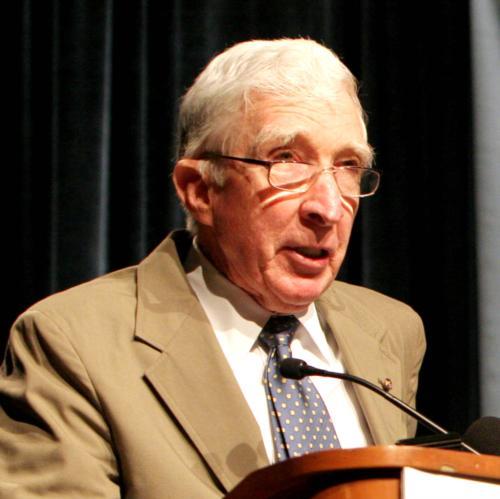 February, not April, is the cruelest month.

For it was on a mid-February day that I learned of John Updike’s death of lung cancer in Jan. 2009. The emotion that I felt was not proper grief—I knew I had not known the man well enough to presume such a depth of loss. We’d only met in the dream of his books. All the same, I had a moment of dumb clawing at the universe. It seemed a double injury: he’d been dead for almost a month already, and in my stupidity, as I hadn’t even known I’d lost him, I’d still been dreaming back in January, fancying me and John could wind up chatting one day on some taciturn street in America. Why had I never written him anything—a letter, an email—to declare my gratitude for his magnificent sentences? People always underestimate their time together.

“Higher Gossip” (2012), a kind of chattering astride the grave, is the closest I’ll ever get to the Updike I missed on his way out. It was published posthumously through the efforts of his estate editor Christopher Carduff, his widow Martha, and friends of the deceased who helped collect and sift what Carduff, in his elegant introduction, calls “Updike’s many fugitive pieces.” They certainly rounded up a load of fugitives. At nearly 500 pages, the book is hefty if not obese. The sample warblings inside come from all periods of the writer’s career: short stories from his early days, a handful of good poems, a wonderful discourse on “Humor in Fiction,” assessments of writers’ lives, brilliant book reviews, art essays, golf essays, and sundry other pieces.

The incredible thing about Updike, a quality rarely native to any other contemporary writer, is that his unmistakable prodding touch is discernable in each miscellaneous fragment, however stray. One need only to look at him nail El Greco’s paintings: “these large, lurid, hyper-Catholic canvases, with their tormented compositions and insipidly pretty, pasty faces.” Or the moment of hitting a good golf shot: “When you connect, it’s the whistle of a quail, it’s the soar of a hawk, it’s the sighting of a planet hitherto unseen; it’s mathematical perfection wrested from a half-buried lie; it’s absolute.” Or the death of his fellow novelist Kurt Vonnegut: “Everyone who knew Kurt, I think it safe to say, misses him. Indeed, it might be said that the planet misses him.” Has anyone said it better?

Updike was fascinated with everything in the world, a veritable humanist astronaut. He is also a humorous observer, though a supremely self-conscious one whose strains of narcissism and misogyny, present here as elsewhere in his work, are probably only rescued by his being John Updike. In the Updike-on-Updike-type pieces he is touchingly modest about his distinctiveness, referring to himself as “a more or less elderly, in some remote sense eminent person.” Yet behind the lighthearted ‘oh, please’ of the gentleman writer toils the serious artist. In “The Writer in Winter,” the book’s opening piece, Updike confesses to a fear of losing his touch: “With ominous frequency, I can’t think of the right word.” Still, even while struggling more in these final productions, he fulfills his own dictum: “Prose should have a flow, the forward momentum of a certain energized weight; it should feel like a voice tumbling into your ear.”

In early spring of this year, when I picked up “Higher Gossip” from a shelf at the public library, it was like embracing a beloved friend that time and the world had estranged from me. I already had a significant chunk of Updike under my belt—his great novels “The Centaur” and “The Witches of Eastwick”; “Still Looking,” an essay collection on American art; “Museums and Women,” a short story collection; one of the “Bech” books, a series on the misadventures of Updike’s alter ego, Jewish writer Henry Bech; and “Midpoint,” a poetry collection. For some time I had been meaning to get around to the famous “Rabbit” tetralogy, but the oppressive feeling of ‘one ought to read it’ had its part in stalling those plans. Now, though, it was so easy to put aside my spring plans to read “In Search of Lost Time” and take up the offer of a liaison with, among other engulfing distractions, this unsanctioned Updikean pseudopod. Such jocund company!

Looking back, I know it was not the right time for Proust. I was taking a semester off from Harvard to stay at home, read for pleasure, write, and think about how to live well. Proust’s slow and brutal realism can be icicles in the heart; I had just left a bitter cold February, and I was looking for warmth. “Higher Gossip” had it. The idea of “gossip” Updike refers to, half-jokingly, is not the “Gossip Girl” type we might have in mind, but rather a more quaintly improper manner of dishing out intimate details about life. In a reflection on the way people wrote in the times of James Buchanan, Updike wonders uneasily, “Will people talk about each other so avidly again, or fashion of the lives of those they know such a treasure of polished nuggets and gimcracks of gossip? How telegraphic, how unloving, by comparison, our own gossip is!”