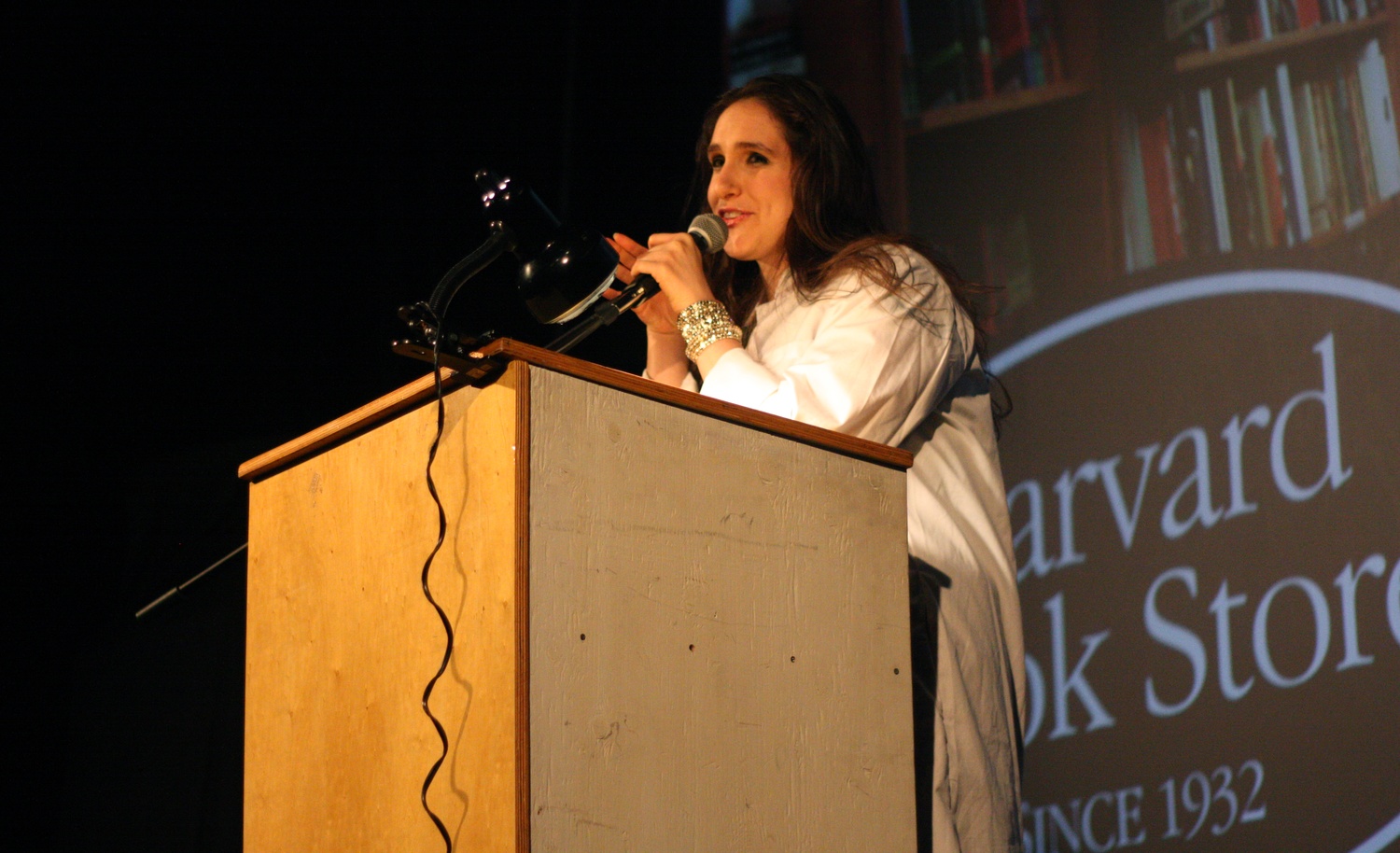 An Interview with Megan Amram

Megan L. Amram ’10, a Twitter famous writer for NBC’s “Parks and Recreation,” calls her new book, “Science...For Her!” her “id of writing.” Having recently stopped by Cambridge for her book tour, she admits that Portland (her hometown) and Harvard were the two stops to which she was most looking forward. “I had so much fun. It really was like, ‘Oh, my God, this is mah people!,’” she says. With Harvard-Yale almost upon us, Amram later tells me how much she loves The Game. Amram, a teasing curl in her voice, cheers, “Go Crimson. I love sports and I love Harvard. I can’t get enough of it.”
By Valeria M. Pelet

Megan L. Amram ’10, a Twitter famous writer for NBC’s “Parks and Recreation,” calls her new book, “Science...For Her!” her “id of writing.” Having recently stopped by Cambridge for her book tour, she admits that Portland (her hometown) and Harvard were the two stops she was most looking forward to. “I had so much fun. It really was like, ‘Oh, my God, this is mah people!,’” she says. With Harvard-Yale almost upon us, Amram later tells me how much she loves The Game. Amram, a teasing curl in her voice, cheers, “Go Crimson! I love sports and I love Harvard. I can’t get enough of it!”

FM: Why did you want to write a book?
MA: I have, for a few years, been writing comedy prose—short pieces for my blog, because I found it to be a good way to write while I was on a TV show. It was different enough from my scripts that it felt like a break, but it still was comedy, and very fun. I like to do comedy!

FM: What drew you to science? Way to prove Larry Summers wrong.
MA: Yes. I mean, that was actually right before I got to Harvard, but it was definitely in the air. I definitely love science. I was a little afraid to do it at Harvard because there were actually smart people, whereas I was just high school smart. But I also have really been fascinated with women’s magazines. Fascinated and frustrated. I thought, just aesthetically, textbooks and women’s magazines look a lot alike, and I thought it would be a very fun character to play—the most sexist woman of all time.

FM: How does your new book relate to your Twitter persona?
MA: I do kind of think they’re the same weirdo—possibly criminally psychotic. The person on my Twitter account has a much worse picture.… But I think they’re both as confused about how to live their lives.

FM: Did being at Harvard influence your comedy style at all?
MA: Well, I wrote for the Hasty Pudding [Theatricals] when I was there, and I think that that was more than two years. It was super great to practice writing in a place, where you’re free to fail, but also free to try a lot of different things. If anything, it helped me crystallize what I really wanted to write. The stuff that made me laugh, I just want to write. My book is pretty crazy. I’m not a very good writer because I don’t have a lot of synonyms at my disposal. I am really proud of it. I think it’s exactly what I wanted to write. I think Harvard gave me that confidence.

FM: Neil DeGrasse Tyson already debunked the science in “Interstellar.” Do you think your book’s next?
MA: (Sighs.) I’ve been tweeting at him.

FM: Has he responded?
MA: He has not! It’s really crazy. It’s like, what could you possibly be doing? Rewatching “Interstellar” to look for more holes? I want him to, maybe not debunk it, but just say it’s correct.

FM: When you submitted the book for publishing, did anyone mistake the book for a serious take on women and science?
MA: It was very funny to see who understood the voice and who didn’t. I would say, most people totally got it, which was really fun. And a relief. Though I think if I met with publishers who didn’t think I was really that sexist, and just didn’t understand, at all, the premise, then were like, “Maybe you could write a memoir?” And I was not ready to do that.

FM: What’s your book’s theme song?
MA: It would be “Perfect Day” by Hoku, which starts up “Legally Blonde,” the movie.

FM: Good answer.
MA: Yeah, thank you, that was very quick. It sounds like I’ve answered that before, and I haven’t. Or it would be…there’s a song called “Dumb Head.” It’s a sixties song, and it’s a woman just calling herself super stupid.

FM: How real is your alter ego, the “other Megan?” Does it take a lot out of you to write as her?
MA: It doesn’t take anything out of me. It’s so fun and easy to flip into. Probably too easy.… I found it so fun to write the narrative. She tells her own story over the course of the book. It’s so fun because you can do anything to her. She’s an awful person. A lot of really bad things happen to her, but I didn’t feel bad about it because she’s so awful.

FM: How do you see your brand of comedy playing with society’s expectations of women?
MA: Hmm. I really hope that girls who are teenagers, or are a little too young, get this book. It’d be really awesome just to find out some of these crazy things in society through dumb girls. I think that’s really important. The big thing about the Larry Summers quote that I found to be a fallacy was that girls are just told to be a certain way, and to do certain jobs when they’re younger. It struck me—I never thought that I had to be any one thing, but some little girls grow up thinking they should be a certain way or a certain job. That’s the way that I would want my book to affect people—to maybe point out little, subtle, sexist things in everyday stuff.

FM: Were you able to create any chemically altered cocktails?
MA: I say that “Sex on the Bleach” is a really good option. Just “Sex on the Beach” with a ton of bleach in it. You know, I’ve never tried it, but I wanna say that it really could go in any direction. You try it and let me know.

FM: Did you ever read Fifteen Minutes as an undergrad?
MA: Yes, of course! I loved it. I still read it every single time it comes out, looking for that hot 19 year old.