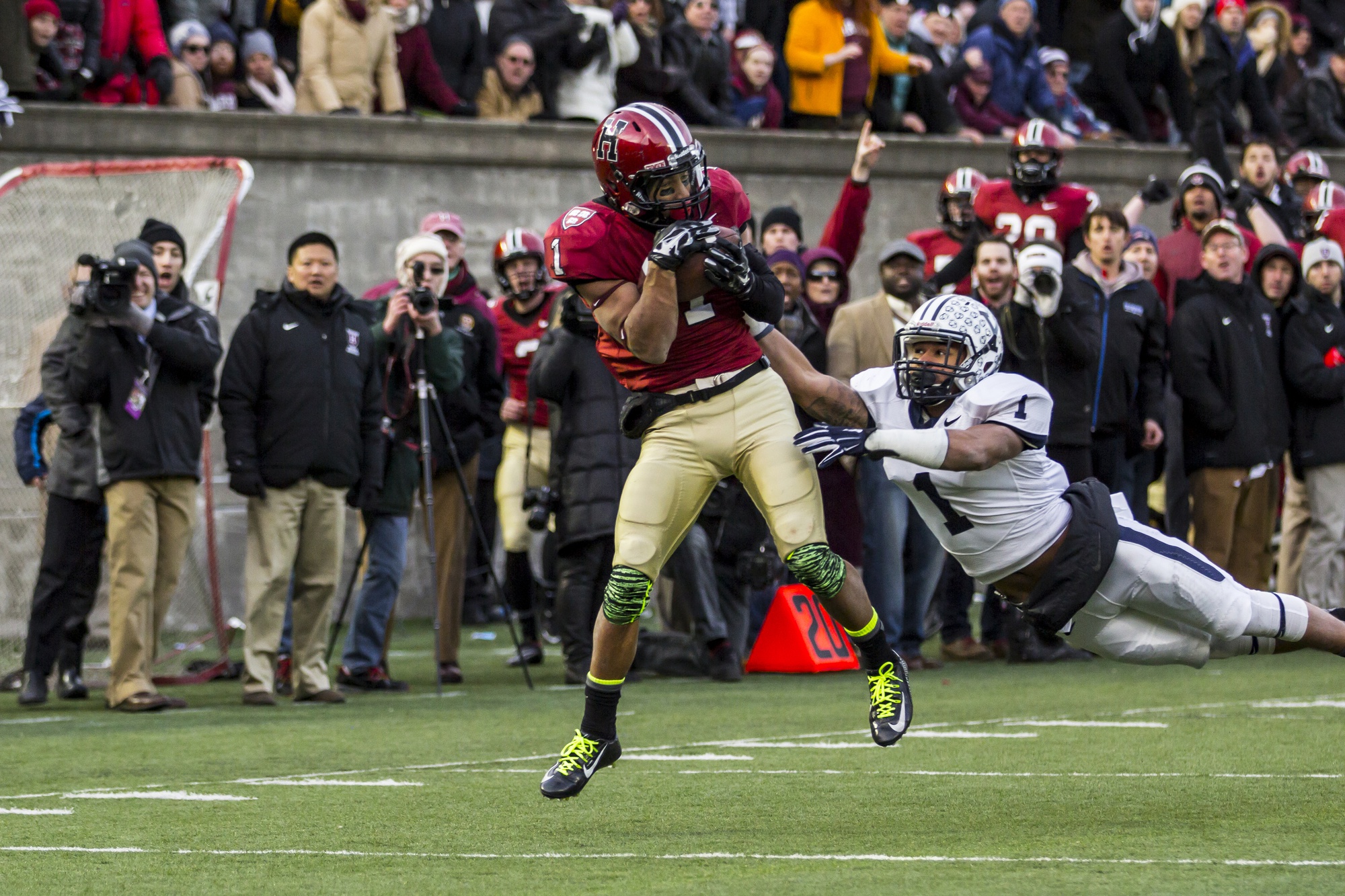 Junior wide receiver Andrew Fischer catches the game-winning score against Yale on Saturday, shedding a tackle by Yale defensive back Dale Harris. The Crimson beat the Bulldogs, 31-24, in a thriller at Harvard Stadium that ensured sole possession of the Ivy title for Harvard, as well as a perfect 10-0 season record.
By Jacob D. H. Feldman, Crimson Staff Writer

Hyperbole is easy in the moments after a perfect season ends. Still, one play in the fourth quarter Saturday vaulted the 131st playing of The Game—a 31-24 Harvard football win—into the conversation for the best Harvard-Yale game ever.

“Any time you beat Yale is unique and very special,” Harvard coach Tim Murphy said. “But I don’t think it’ll ever get more exciting than this—this was way too exciting.”

All of the noise in Harvard Stadium was coming from the Eli contingent when the Crimson got the ball with 3:44 left in what was then a tied game.

But senior quarterback Conner Hempel reignited the offense with a slalom five-yard run for a first down.

Two plays later, it was junior running back Paul Stanton who rushed for 13 yards and a new set of downs.

After an incompletion, Hempel found Fischer for a 12-yard gain, but it was what the duo did on an ensuing play that cemented their place in Harvard history.

On first-and-10 from the Yale 35-yard line with a minute to play, Fischer beat his defender down the Harvard sideline on a double-move and Hempel hit him in stride. All the wideout had to do was take a couple of strides into the endzone and then let his teammates lift him up as the sideline and crowd went berserk.

“It was a double-move, a slant-and-go basically,” Hempel explained. “We had been running slants all game, and he just kind of bit on it, and Fisch beat him with his speed.” 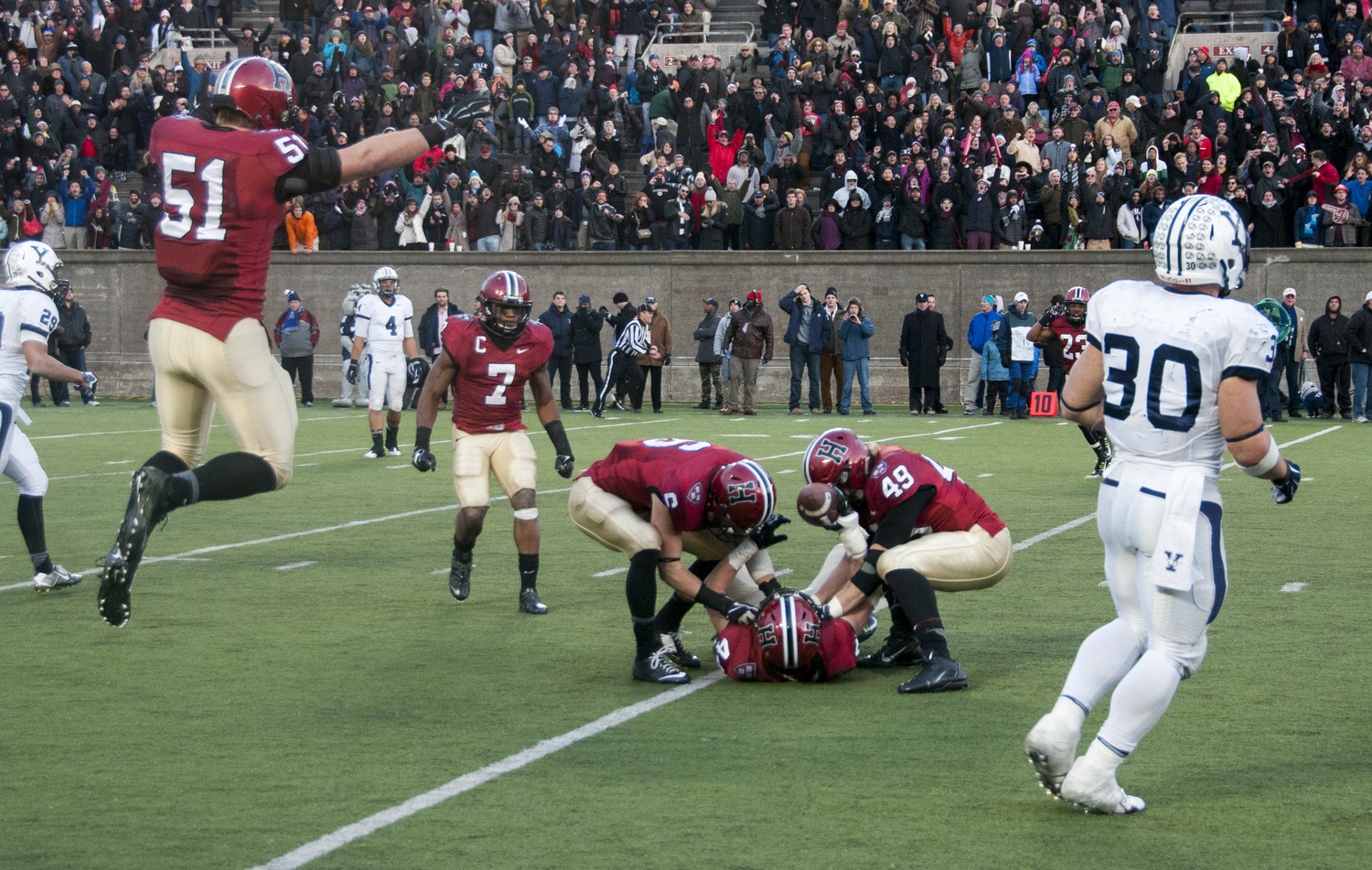 Given only 55 seconds to respond, the Bulldogs drove to the Crimson’s 25, but got no further. Senior defensive end Zach Hodges tallied his final sack of the year, and then junior defensive back Scott Peters intercepted Yale quarterback Morgan Roberts to seal the game.

The Harvard football team had trailed. It made mistakes. But none of that mattered as Peters fell to his back and lifted the ball in the air. The Crimson is perfect.

It is unblemished for the third time in a century, Ivy League champion for the second straight year, and the outright winner at that.

In the process, Harvard extended its winning streak in The Game to eight games, tying the longest streak ever. Yale won eight straight in the 1880s.

“We all have our personal goals—the offense has their goals—but our team goal is to go 10-0, and to actually [do] that in the fashion that we did it is very, very special,” Hempel said.

Thanks to his late touchdown pass, Hempel’s slow start Saturday will be forgiven if not forgotten. He underthrew Fischer on the first play of the game and finished the first quarter with just one passing yard.

Hempel attributed the slow start to cold weather and a slick ball, but Murphy said it was a sign of how hurt Hempel still was after missing two games.

“From my standpoint, Conner’s performance was inspirational,” Murphy said. “He was not 100 percent; he was nowhere near 100 percent…. [It was] just a tremendously gutty performance.”

The offense as a whole struggled early. Harvard had to settle for a field goal in the first quarter even though a blocked punt by senior Ryan Jones gave the Crimson the ball inside Yale’s 10.

After Harvard got back into the red zone thanks to a 58-yard reverse run by Fischer, junior running back Paul Stanton fumbled the ball.

The Bulldogs struggled offensively early on too, but they still led 7-3 at halftime. That lead did not last long though.

Harvard scored on three of its first four second half possessions, with the only scoreless drive coming when a field goal kick was blocked. Its last score came when senior linebacker Connor Sheehan took the ball from a Bulldog wideout and ran it back 90 yards for a touchdown, setting the career and single-season records for interceptions returned for scores.

Yale responded with three straight scoring drives of its own, but it was ultimately the Crimson seniors that got their storybook ending.

“Honestly, this game makes my career,” Hempel said. “I couldn’t have drawn it up any better.”