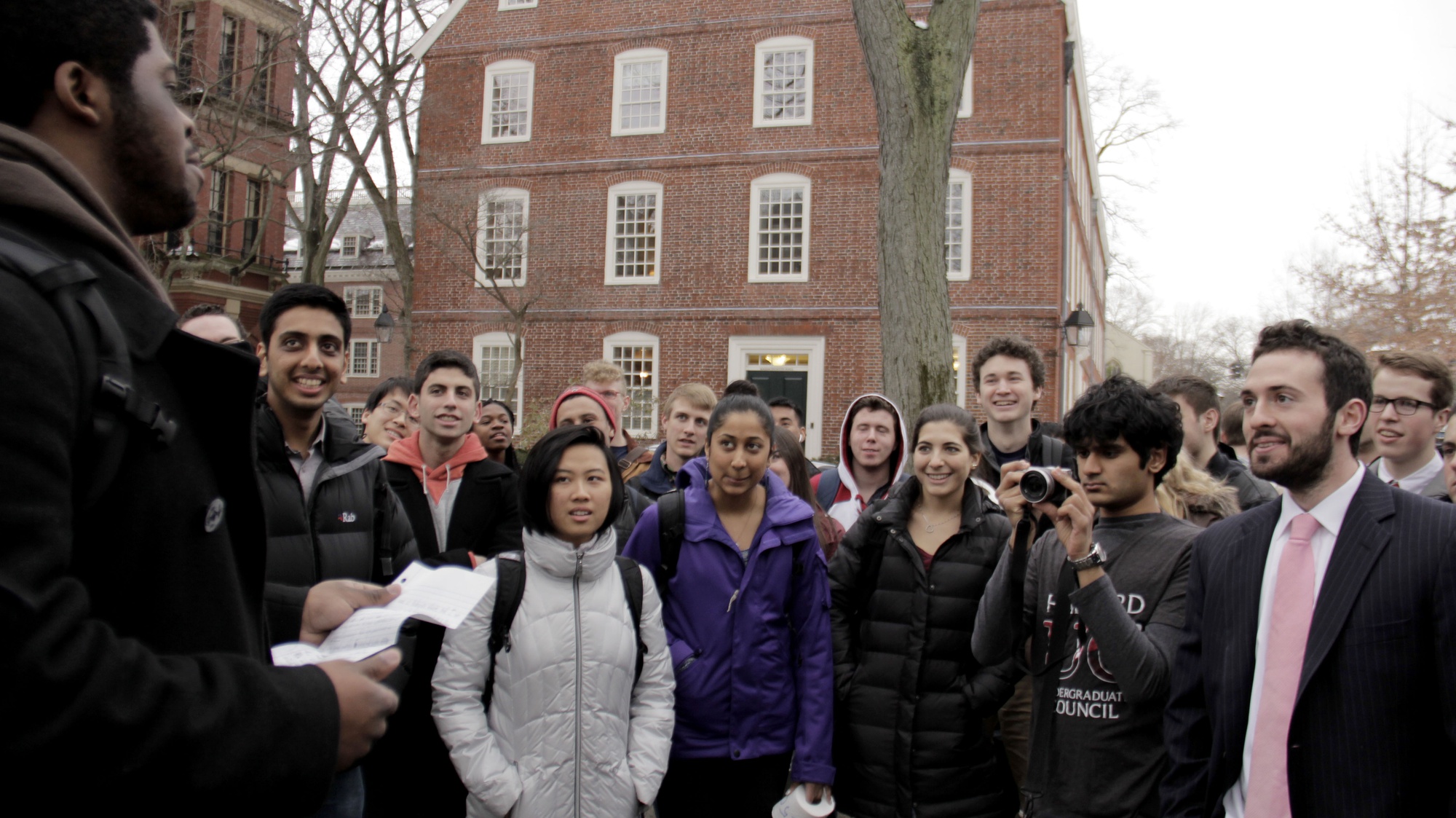 Mayopoulos listens as the president of the Black Men’s Forum, Rodriguez A. Roberts '15, explains how increased student funding would help his club at the Undergraduate Council's 250K Rally.
By Noah J. Delwiche, Crimson Staff Writer

The Undergraduate Council will receive no funding directly from the University this year, but top Council leaders say the College is considering picking up the tab for about $36,000 the Council currently earmarks for Drug & Alcohol Peer Advisors and Phillips Brooks House Association, freeing up a sizable portion of the UC budget.

The development marks an all-but-official end to an almost year-long campaign by Council leaders to push for increased student group funding.

Last February, UC President Gus A. Mayopoulos '15 and Vice President Sietse K. Goffard '15 unveiled a plan to demand a $250,000 funding increase directly from the University. With public declarations to students replete with impassioned rhetoric about the need for more funding, they convened with several top Harvard administrators and hosted a rally outside Massachusetts Hall. 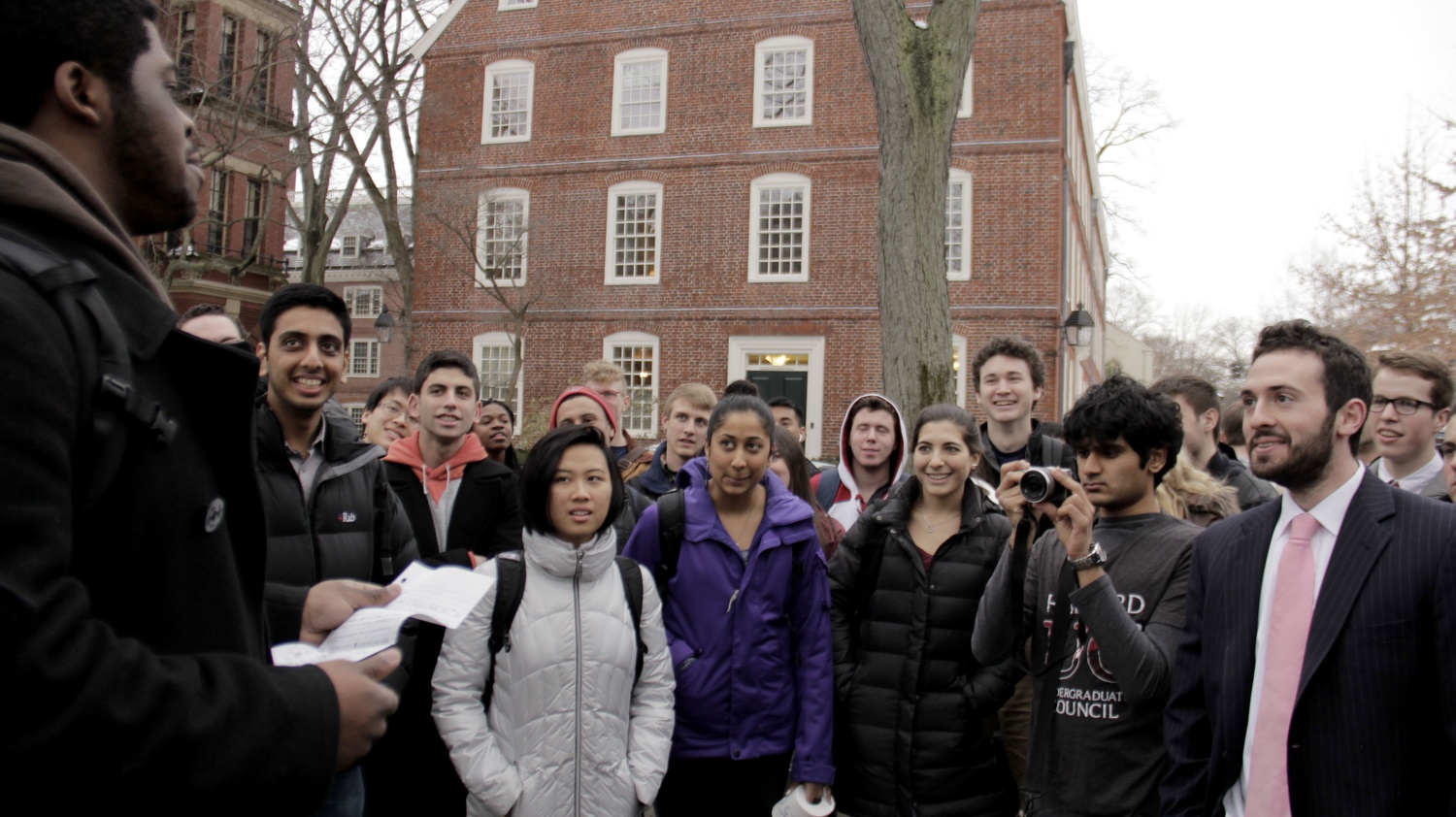 With public declarations to students replete with impassioned rhetoric about the need for more funding, they convened with several top Harvard administrators and hosted a rally outside Massachusetts Hall. By Madeline R. Lear

Gradually, however, their hopes and public prioritization of the funding goal appeared to fizzle. Even as Council leaders continued to disagree with administrators as recently as this week, they have spoken optimistically about a new grant that could be made possible by the College’s potential coverage of DAPA and PBHA funding.

Mayopoulos and Goffard are currently in conversation with the Office of Student Life and the Office of the Dean of the College about a new “bridging and belonging” grant, designed to promote interaction among various student groups.

The grant, whose idea was spawned from a meeting with Dean of the College Rakesh Khurana last month, will serve to fund events “truly co-organized by various different student groups,” according to Goffard. He and Mayopoulos described their conversations with Khurana as productive and said that the college seems to be “very cooperative.”

Still, the Council leaders appear to disagree with administrators on the need for more student group funding.

Goffard said that Associate Dean of Student Life David R. Friedrich informed them earlier this semester that “the data show that, in his words, student groups are already ‘amply funded’ at Harvard.” OSL had been gathering data over the summer to assess the demand for more funding.

Friedrich wrote in an emailed statement that OSL has been continuing a conversation about funding with the UC and looks forward to discussing the possibility of the bridging and belonging grant.

Mayopoulos and Goffard said OSL did not allow them to view its compiled data in full, due to the sensitive nature of the numbers. In an email forwarded to The Crimson, Assistant Dean of Student Life Emelyn dela Pena informed Mayopoulos and Goffard that student groups received about $1 million in funding from sources other than the UC, not including funds restricted for particular groups.

Both Mayopoulos and Goffard said, however, that they do not believe the University denied the UC additional funding for purely financial reasons.

“I think there were legitimate concerns that were never explicitly stated, but exist nonetheless, that extracurriculars are distracting from academic life at Harvard,” Mayopoulos said.

Despite that perceived discrepancy, the pair expressed reserved optimism at having pushed for increased funding in the first place.

“[In] the end, we did get an answer for students in the sense that their extracurriculars weren’t funded any more, despite us really making a case for it,” Mayopoulos said.