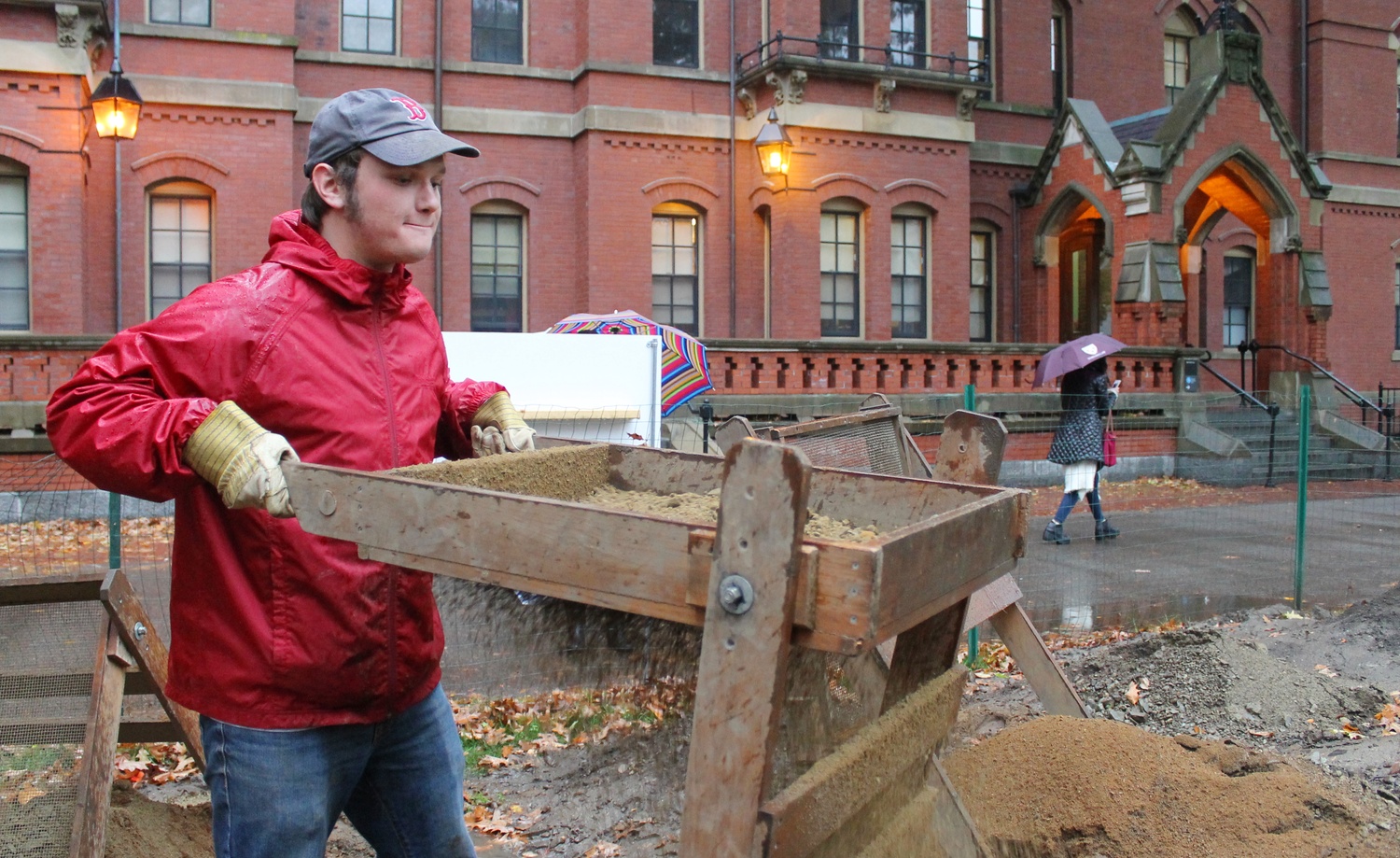 A student sifts through excavation finds of the predicted site of the Indian College on Thursday at the results day outside of Matthews Hall. By Jennifer Y Yao
By Andrew M. Duehren, Contributing Writer

Students in an undergraduate anthropology class presented their findings on Thursday after they spent the fall term excavating the remains of the Harvard Indian College, a 17th century school for American Indians that was affiliated with a young Harvard University.

This is the fourth year students from Anthropology 1130: “The Archaeology of Harvard Yard”  have worked in this section of the Yard. After discovering the foundation of the Indian College in previous digs, students said on Thursday that the discovery of a “clay cap” basement structure could shed new light on life at the school, which was erected in 1655 and dismantled in 1698.

“This is the first time we’re seeing the interior of the building in any kind of expansive way,” said Adam Stack, a teaching fellow in the course. “When we start corroborating [the results] with historical evidence, we might learn a lot more about how the actual construction of the building took place, what might have been going on inside…these are details that are not recorded historically.” 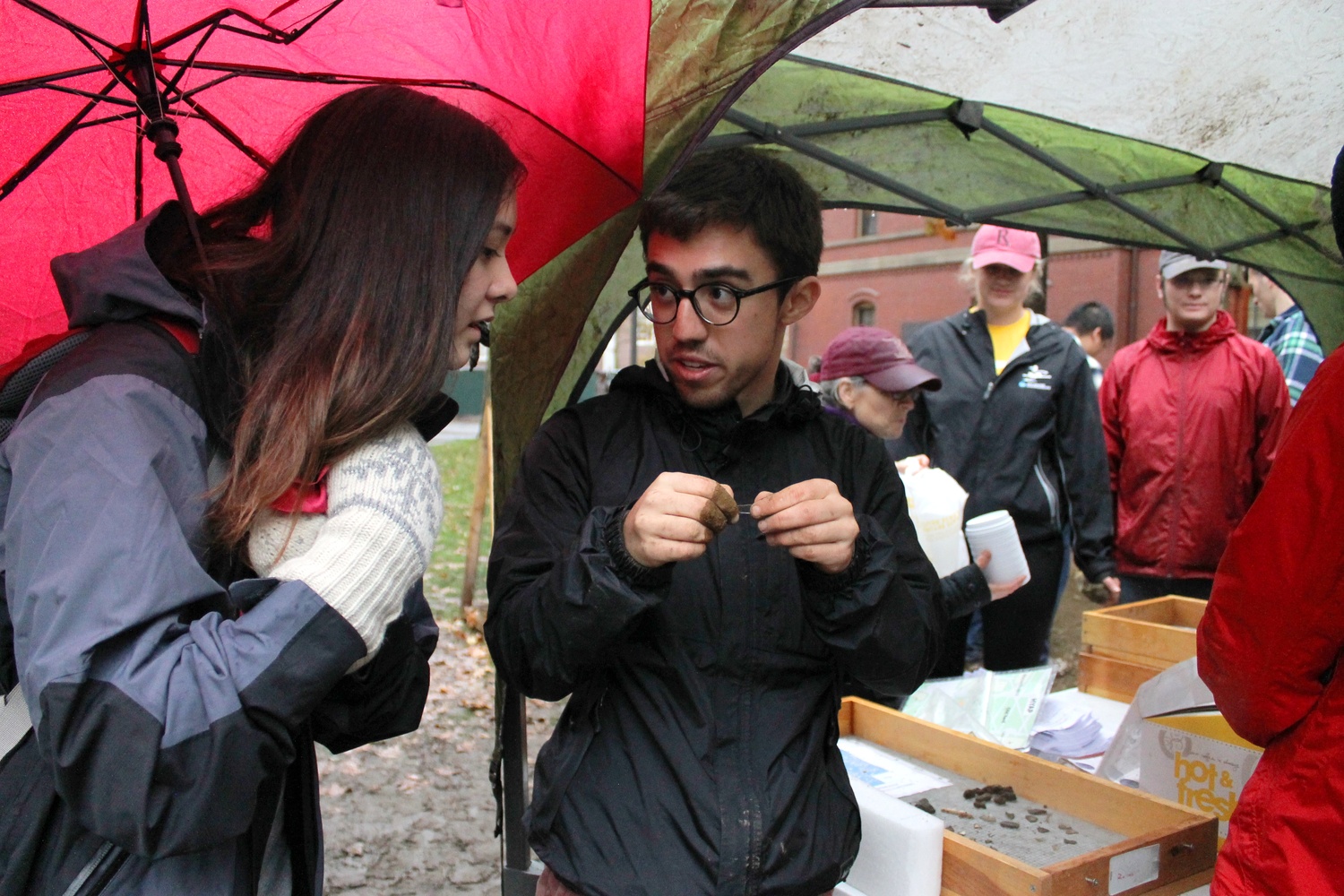 Santiago Pardo '16, member of the Harvard Yard Archaeology Project, explains recent finds to Hannah K. Rasmussen '16 outside of Matthews Hall despite the rain and cold weather on Thursday afternoon. By Jennifer Y Yao

Over the course of the semester, students also found artifacts of 17th century life at the College, including pieces of smoking pipes, glass from bottles of alcoholic beverages, and silver cufflinks.

Both faculty and students said they were pleased with the results of this year’s dig.

“Our goal was to identify archaeological context relating to the Indian College, or at least the 17th century,” said Patricia Capone, curator and director of repatriation at the Peabody Museum of Archaeology and Ethnology and lecturer on Anthropology. “I think we’ve achieved those goals.”

“The results have been incredible,” said Matthew C. Gschwend ’16, adding that he may pursue a secondary in archaeology after taking the class. “This has been one of my favorite classes at Harvard,” he said.

The class is part of a collaborative effort between the Anthropology Department, the Peabody Museum, and the Harvard Native American Program that aims to discover more about the early history of Native Americans at Harvard.

In place of a more traditional section in the classroom, students in the class meet for three hours every Thursday to work on the archaeological site.

Thursday’s event drew a number of interested spectators, including a 6th grade social studies class on a field trip from the Glen Urquhart School in Beverly, Mass. Undergraduates and faculty members, who have worked in pairs on the dig that began in September, cycled between presenting discoveries from their respective areas of the site and continuing to dig. 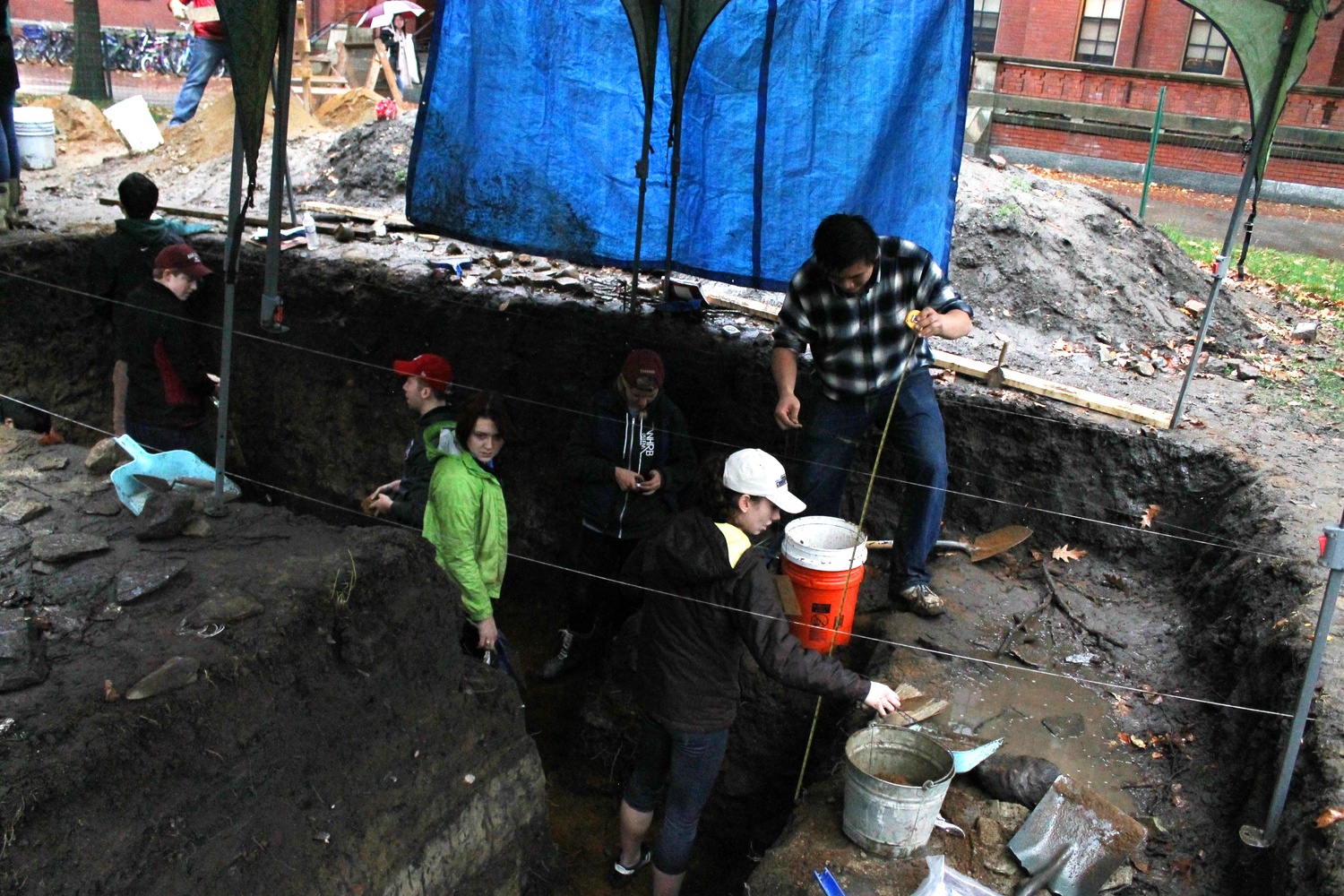 Like the course itself, Thursday’s event was hands-on, allowing participants to personally examine the artifacts, despite the rain.

“This class really sets Harvard apart, in that you have the opportunity to get your hands dirty and actually do the archaeology yourself,” said John B. Holland-McCowan ’15, a student in the class.