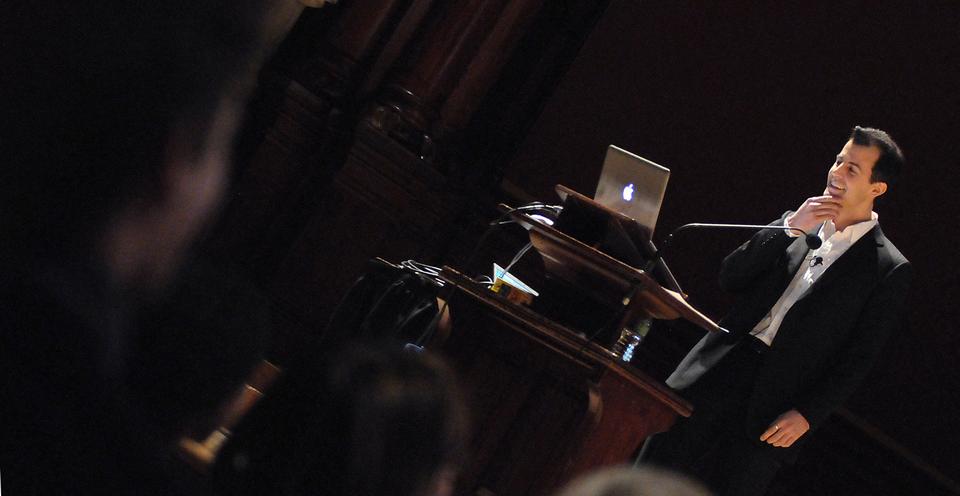 Computer Science Lecturer David Malan presents during the “Harvard Thinks Big” event on Feb. 11, 2010. Ten Harvard professors were given 10 minutes on the stage of Sanders Theatre to speak about their area of expertise.
By Meg P. Bernhard, Crimson Staff Writer

The course proposal was already approved on Oct. 16 by Yale’s Course of Study Committee for a three-year trial period, but the vote at the monthly faculty meeting officially completes the approval process on Yale’s end.

“There was a lively discussion of the need to expand the instructional-support role of undergraduates but no real opposition,” Feigenbaum wrote in an email, explaining that the course would need to develop its own on-the ground instructional staff, who would hold office hours and sections.

Now, according to  Feigenbaum, Harvard faculty must approve of the “joint Harvard-Yale CS50” in order to move forward with its implementation.

“I'm very optimistic that Harvard will approve the joint course as well,” Feigenbaum wrote in an email Thursday.

David J. Malan, pictured here in 2010, reportedly initiated the idea for a joint venure between the two schools. By Bora Fezga

Harvard CS50 Professor David J. Malan ’99 did not respond to request for comment on the development, but said through a spokesperson earlier this week that he has considered offering  CS50 jointly at both Harvard and Yale and "expect[s] [to] know more by December."

Malan emailed Feigenbaum over the summer proposing an idea for a “joint Harvard-Yale CS50,” course, which Feigenbaum said would consist of Malan’s lectures streamed to Yale and would be led by an on-the-ground instructor and Yale support staff.

Prior to the faculty’s vote, Yale had already tapped a professor, Brian Scassellati, to teach the course in New Haven, according to Feigenbaum.