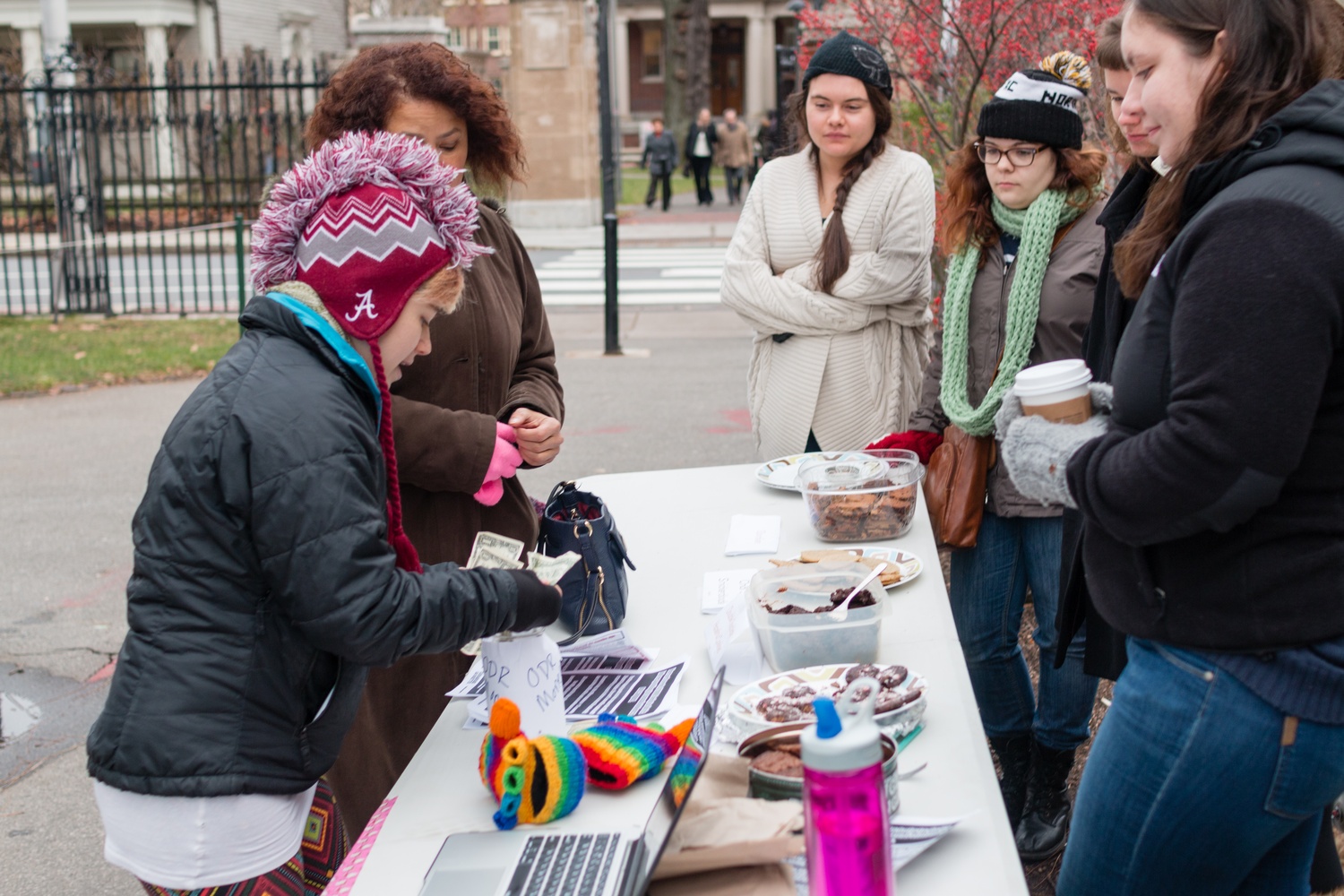 Harvard announced the creation of the Office for Sexual and Gender-Based Dispute Resolution this summer as a part of its first unified sexual assault and misconduct policy. The office is a centralized body tasked with investigating complaints from all University schools that fall under the new policy.

The office intends to hire three full time investigators in total to work alongside Title IX Officer Mia Karvonides and other staff, but two of those positions have remained vacant for months and have yet to be filled.

Organizers from Our Harvard Can Do Better, a sexual assault activism group who sponsored Friday’s bake sale, worry that the listed salary range for the investigators, which The Crimson first reported in September, may not lure qualified candidates and could stymie the office’s work.

In an effort to expedite the hiring process and raise awareness of what they see as an underfunded and understaffed office, members of Our Harvard Can Do Better hosted a bake sale with the intention of directing the proceeds to ODR and the umbrella University Title IX Office. The group suggested donations of 36 cents per item, an overt allusion to what they see as the misallocation of dividends from Harvard’s more than $36 billion endowment.

In total, the group raised about $120, as well as 10 Canadian dollars, according to the event’s Facebook page. It is unclear whether ODR accepts donations and University spokesperson Jeff Neal did not respond to a question attempting to clarify the matter. Karvonides did not respond to requests for comment. 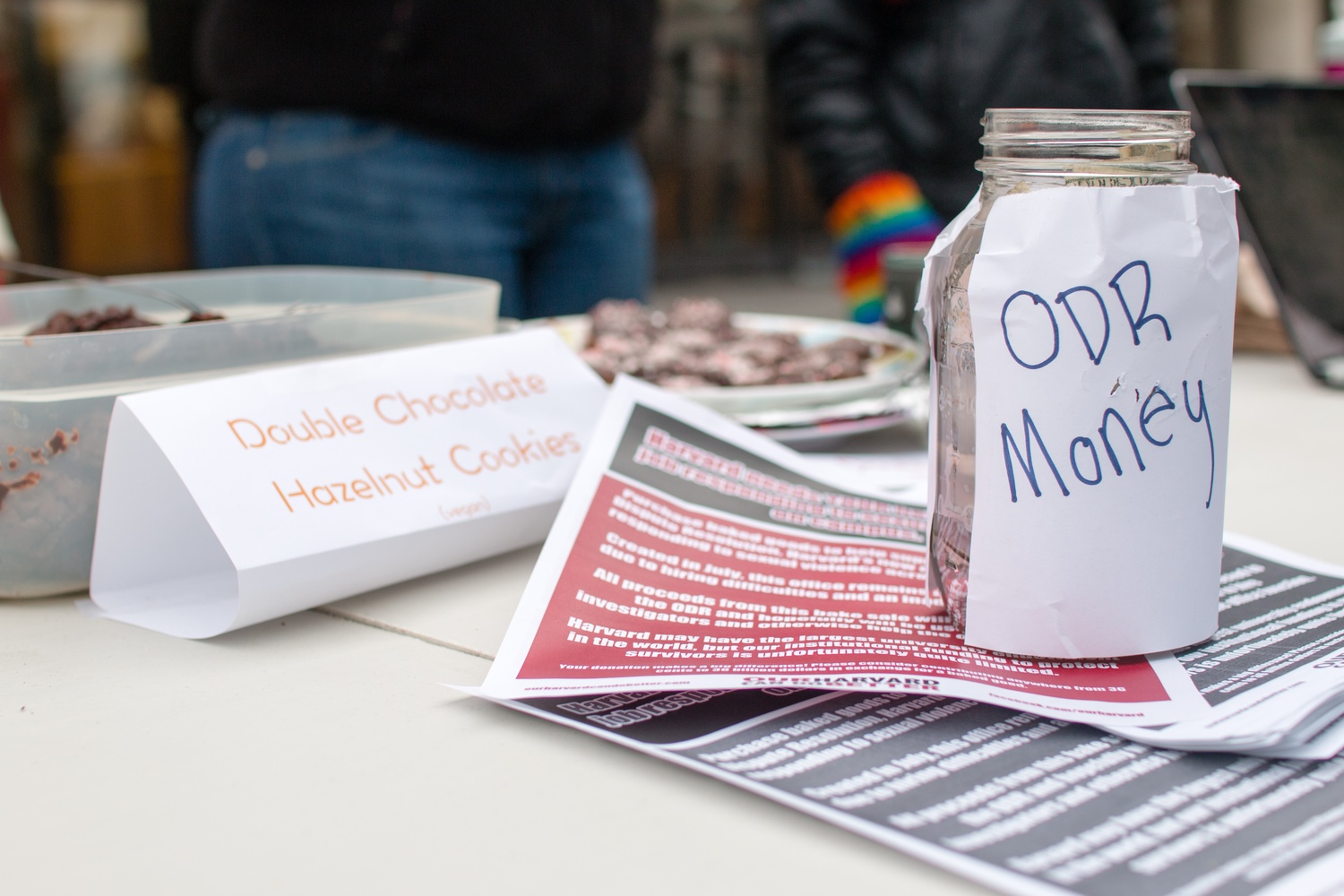 A jar holds bake sale donations for the understaffed Office for Sexual and Gender–Based Dispute Resolution. By George J Lok

Neal wrote in an emailed statement that ODR has recently hired two other additional staff members and is continuing to review applications for the investigator positions. The centralized office has not released the number of investigations it has received so far. ODR will likely also begin to take on investigations for complaints raised by and against Faculty members in the future, if a set of changes to the Faculty of Arts and Sciences policies on the matter are adopted as expected.

“Obviously it’s a satire,” Emily M. Fox-Penner '17, an organizer, said of the bake sale. “Harvard is under two federal civil rights investigations for a grossly inadequate response to sexual violence. The [ODR] is supposed to be the flagship initiative to actually demonstrate substantive response, and the fact that six months after it’s founded, it...is grossly underfunded just hugely highlights that this is a cosmetic initiative.”

Jessica R. Fournier '17, another organizer, said that the office has taken an “incredibly long time” in preparing yet-to-be-published secondary materials on the new University-wide policy, leading her to believe office staff was overworked.

Responding to claims that the office was understaffed, Neal wrote that it has contracted “highly experienced” attorneys to help its only staff investigator, William D. McCants, as the ODR continues to review applications for the permanent positions. Neal wrote that those contractors, working with permanent staff, are investigating cases “professionally, thoroughly, fairly and in full accordance with the newly adopted University procedures.”