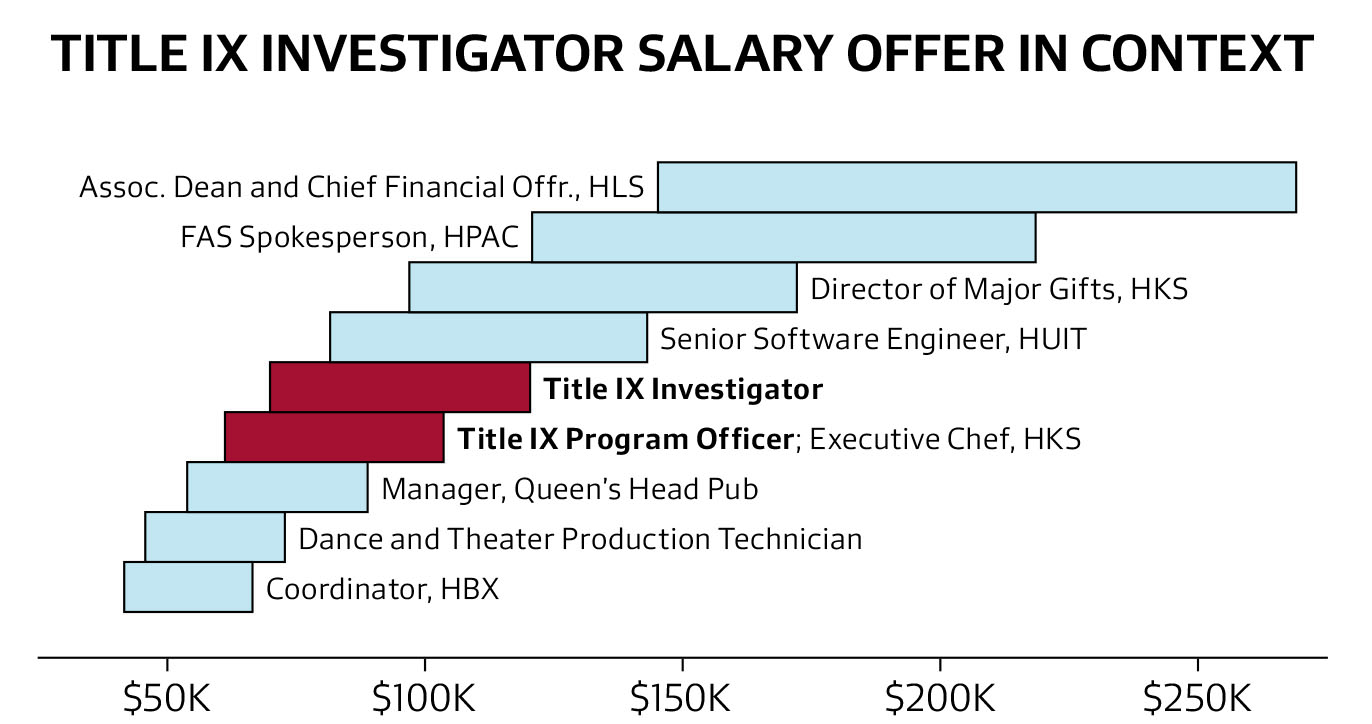 Harvard unveiled a new policy to dramatically rework its handling of sexual assault and harassment claims this July, but several weeks into the semester, the office in charge of investigating those cases is still not fully staffed.

Tucked away on the ninth floor of the Smith Campus Center, the new Office for Sexual and Gender-Based Dispute Resolution employs just one full-time investigator, William D. McCants, who started at Harvard in August. He’s joined by two assistants and University Title IX Officer Mia Karvonides, who oversees the office, in addition to a handful of office staff.

But the new office, which is solely responsible for investigating the sexual harassment complaints of students from all of Harvard’s schools, is still looking for two full-time investigators to work alongside McCants. Those positions remain vacant at a time when studies suggest students are particularly at risk for sexual assault—the start of freshman year. It is unclear how many, if any, cases have been brought before the office so far.

University officials have called the professional investigators’ role “extremely important and sensitive” and acknowledged that the market for qualified candidates is competitive.

Experts echo that assessment, suggesting that competition from other institutions will prove an obstacle to Harvard as it strives to fill out its staff. Many institutions, like Harvard, are scrambling to hire new personnel as they face federal scrutiny into their adherence to Title IX, the anti-sex discrimination law that governs how universities respond to cases of sexual harassment.

Given that hiring market, Lake said, colleges will need to invest significantly to attract qualified investigators. According to recent online job postings for the two vacancies in the ODR, Harvard’s proposed salary range—between $70,000 and $119,900—is lower than what the school is willing to pay a spokesperson for the Faculty of Arts and Sciences or a senior official at Harvard Planning and Project Management.

That salary offer could make it difficult for the University to attract attorneys with sufficient experience to investigate Title IX cases, said Kevin Powers, a partner at the Boston-based employment and civil rights law firm Rodgers, Powers, and Schwartz.

In an emailed statement, University spokesperson Jeff Neal defended the posted salary range. Harvard set the pay grade after looking at salaries of those in similar positions at other schools and organizations, he wrote. When asked, Neal did not comment on the challenges the University has faced so far in the hiring process but wrote that the office will make temporary hires to supplement full-time staff if the need arises.

A request for comment from Karvonides, who has not spoken with The Crimson on the record in 2014, went unanswered. Upon arriving to an interview scheduled by McCants’s secretary, a reporter was told by the secretary that the meeting was cancelled and referred to Harvard’s Office of Public Affairs and Communications.

At a town hall-style meeting earlier this month, Karvonides acknowledged that there is a limited supply of professionals in the field.

Questions about the level of qualification Harvard seeks also remain. History professor Alison Frank Johnson, who heads the committee charged with implementing the new policy in FAS, has publicly assured students that she expects highly-trained attorneys to fill the open positions. But the job listing, last updated on Sept. 16, does not require applicants to hold a juris doctorate.

Neal wrote that a J.D. is listed as “highly preferred” in the job posting and not required of applicants so as to allow candidates with “deep” investigatory experience, but not necessarily a law degree, to fill the vacancies. Neal added that McCants, the lead investigator who holds a J.D. from Harvard Law School, will oversee the work of the investigators.

The public posting further stipulates that the appointment will last for two academic years with the potential for renewal, a length that Powers said might cause recruitment problems for Harvard.

“Who’s going to leave a law firm for two years to work for Harvard?” Powers asked. He said that, in his opinion, the ideal contract length would be three to five years.

Even as it has struggled to staff the ODR, Harvard has made other hires to beef up its network of sexual assault support staff since last spring, when the College was hit with a Title IX complaint to be investigated by the Department of Education’s Office for Civil Rights. The staff of the Office of Sexual Assault Prevention and Response has since grown two-fold, per the recommendation of the presidential task force led by former University Provost Steven E. Hyman. OSAPR is in the process of hiring a sixth professional, according to Neal.