Former HKS Prof. To Be Nominated for Secretary of Defense 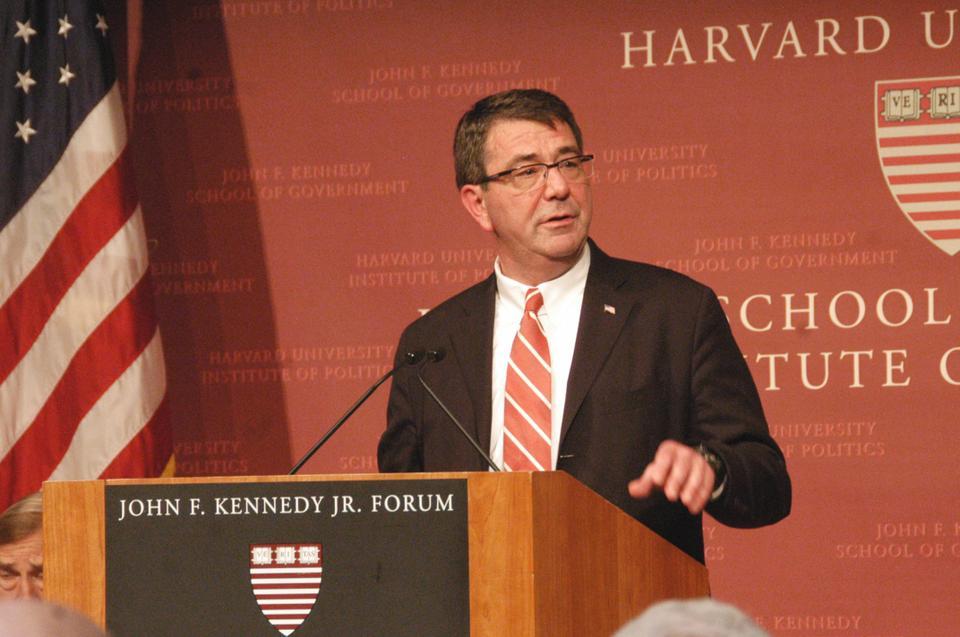 Ashton B. Carter delivers a 2011 address at the JFK Jr. Forum entitled "Wars and Budget Wars: Managing in the Pentagon." By Anisha D Shenai-Khatkhate
By Ivan B. K. Levingston, Crimson Staff Writer

Former Harvard professor Ashton B. Carter will be tapped by President Barack Obama to be the next Secretary of Defense, the Associated Press and The New York Times reported Tuesday.

Carter, a physicist and a former professor of science and international affairs, once oversaw the Pentagon’s budget and the Obama administration’s “pivot to Asia” initiative and is a veteran public servant. Carter served in top posts under Secretaries of Defense Leon Panetta and Chuck Hagel from 2009-2013.

Hagel, a Republican who has led the Department of Defense since early 2013, announced his resignation in late November.

Carter, who is a Democrat, is expected to be officially nominated by the president in the next few days, according to media reports. Once nominated, Carter will then need to be confirmed by the U.S. Senate.

Colleagues from the Kennedy School of Government and Department of Defense said Carter was an excellent candidate to lead the U.S. military because of his administrative skills and deep understanding of policy.

“He’s the perfect choice for the president to make,” said John M. Deutch, a friend of Carter’s and a former deputy secretary of defense.

Deutch said that in addition to facing conflicts in the Middle East and tension with Russia, Carter will also have to negotiate a smaller defense budget and more prevalent cyber security threats.

Joseph S. Nye Jr., who worked with Carter both at the Department of Defense and as dean of the Kennedy School, also praised Carter’s experience in policy.

Carter has remained involved with the Kennedy School since he left for Washington D.C. and has served on the board of the Belfer Center for Science and International Affairs, from which he is currently on leave.

Gary S. Samore, the Belfer Center’s executive director, said that Carter’s expertise as a “master of the budget” will aid him in case Congress reduces the defense budget.

“Ash is a very smart choice in terms of being experienced,” Samore said. “When I see him with the president I think they have a good relationship.”

Though Carter’s nomination was only reported on Tuesday, Carter’s colleagues said they were not surprised in the president’s choice. Samore said that he had immediately thought of Carter after current secretary Hagel announced his resignation.

“As soon as I heard that Hagel was leaving, my first thought was that Ash would be a logical replacement because he’s known to the president and his team,” Samore said. “He’s a very safe pair of hands, and I think that’s what Obama needs now.”

Deutch predicted that Carter’s Senate confirmation “will go very smoothly because he’s a known quantity for the committee.”

However, not everyone predicted a straightforward confirmation process. Samore said he thought that there was potential for the confirmation hearings to be used to “air other issues” regarding the administration’s current campaign against Islamic extremism.

Former HKS lecturer and Obama administration colleague Juliette N. Kayyem said that Carter’s potential appointment would come with added responsibility to bring stability to the defense bureaucracy, given that Carter would be Obama’s fourth defense secretary.

“Ash uniquely has the ability to look past the tyranny of the inbox...and think about the department and position it for the next 20 to 30 years,” she said.

—Staff writer Forrest K. Lewis contributed to the reporting of this story.