Gathering Is Second Large Protest on Campus This Week 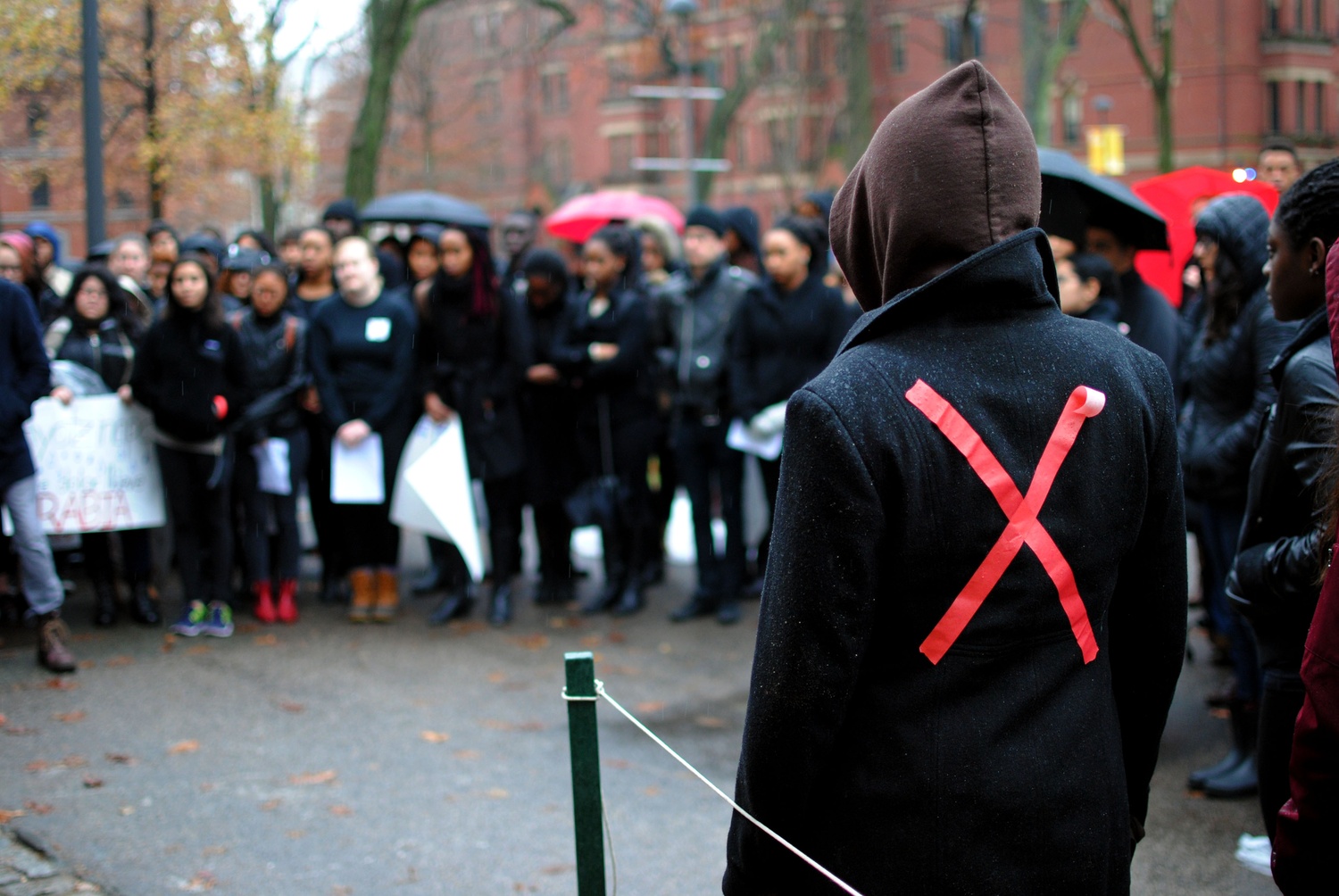 Almost 200 Harvard students and community members gathered in front of University Hall Wednesday morning to protest the death of Michael Brown, a black, unarmed Missouri teenager who was shot and killed by a white police officer in early August.

The protest came just two days after several hundred students from Harvard and Cambridge Rindge and Latin School flooded the center of Harvard Square, temporarily shutting down the streets there as they drew attention to what they called unequal treatment before the law. Both protests were spurred by a St. Louis County grand jury’s decision almost two weeks ago not to indict Darren Wilson, the white police officer who shot and killed Brown.

Protesters gathered on Wednesday listened to speeches, sang songs, and participated in a “die-in” at the feet of the famous John Harvard statue, even as a cold rain soaked the Yard. Some held signs, bearing slogans that have become well-known as protests have occurred across the country in recent weeks. 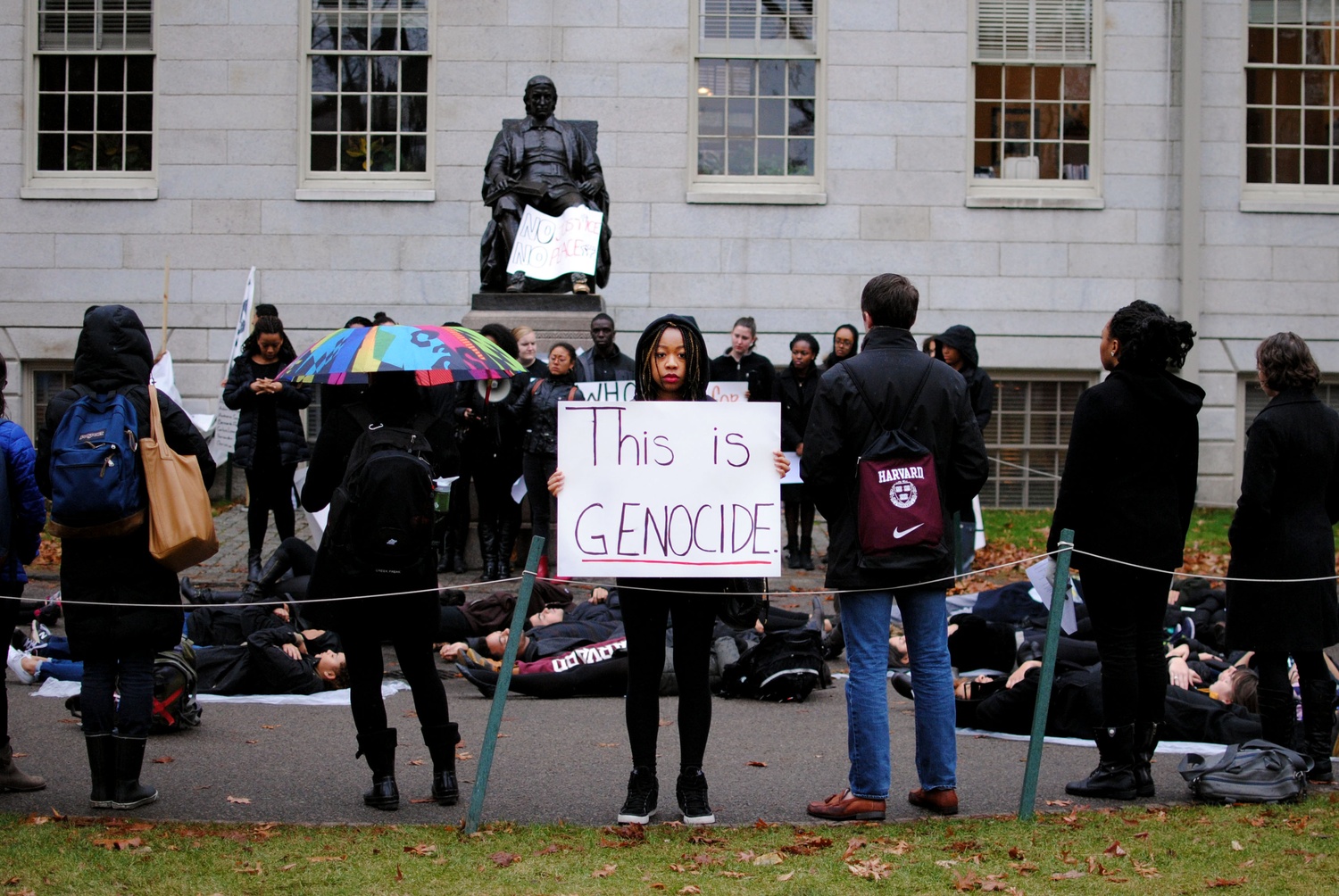 “The darkest truth of our democracy is that black lives have never mattered as much as white lives have,” Timothy P. McCarthy ’93, a lecturer at the Kennedy School, said to applause from the crowd.

McCarthy shared the story of a black student named Malcolm whom he mentored during his time as an undergraduate at Harvard and came to consider a brother. 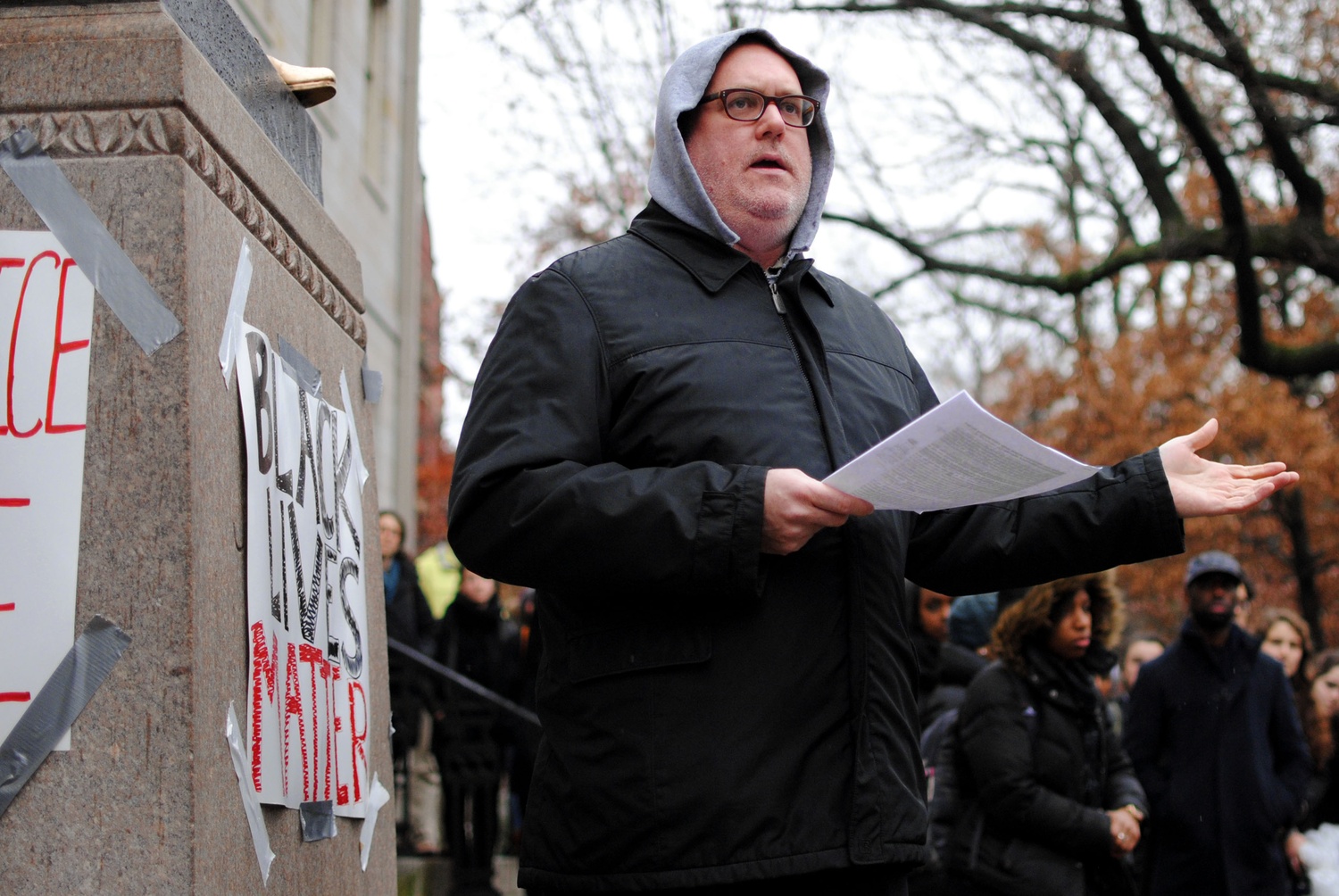 Harvard Kennedy School lecturer Timothy P. McCarthy '93, gives a speech arguing that "black lives have never mattered as much as white lives have" at a protest Wednesday morning outside University Hall. By Tiana A Abdulmassih

“After school, Malcolm could either walk through his neighborhood or to visit me in Quincy House,” McCarthy said. “But either way, his walk was policed. We lost count of how many times he was stopped and questioned.”

Jonathan L. Walton, Pusey Minister of the Memorial Church, also discussed his experiences with police as a black man.

“A common police motto is to protect and to serve,” Walton said during his speech. “Unfortunately, the modern militarized police force is more concerned with containing and criminalizing, particularly for black male bodies.” 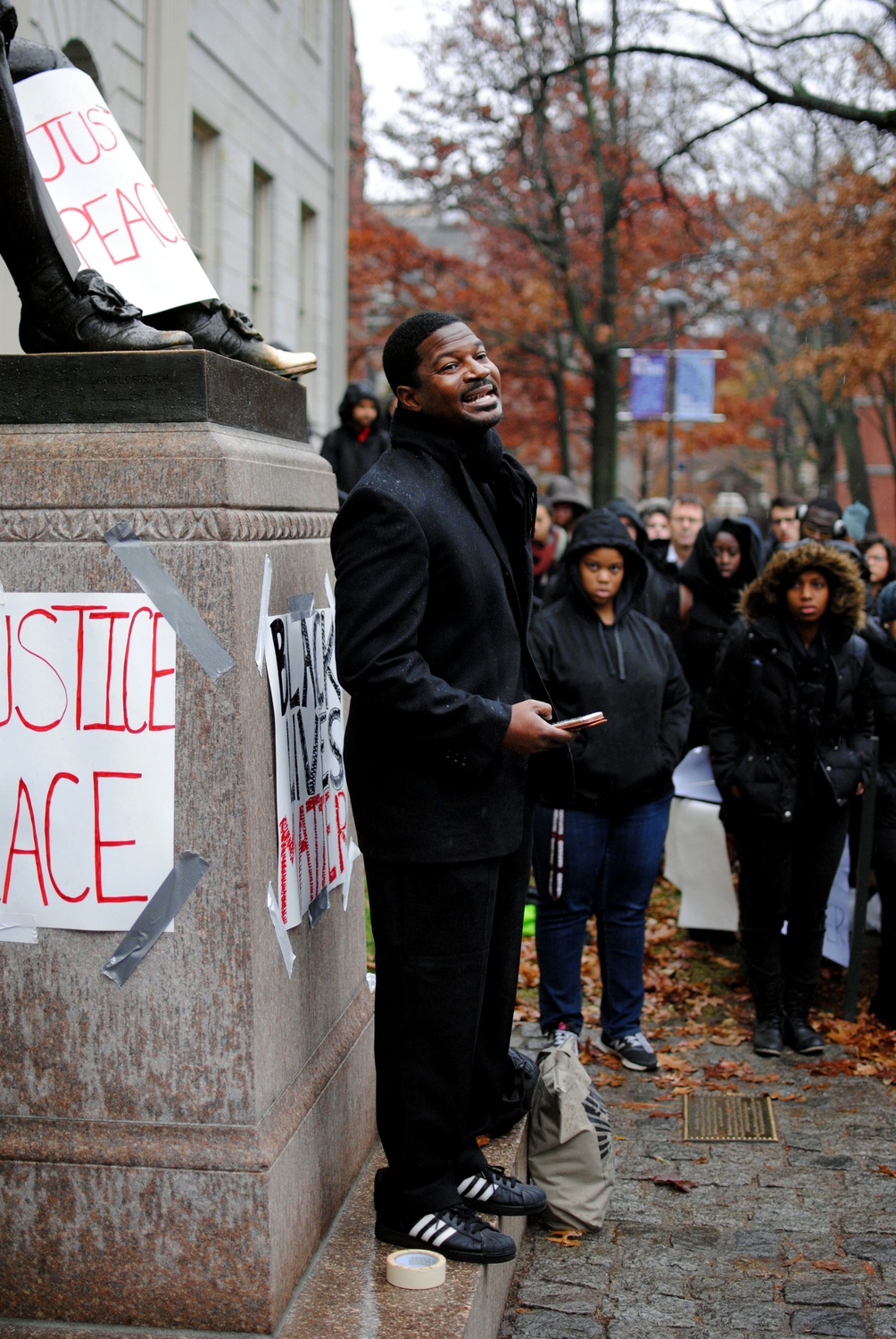 Walton said that although Harvard police officers are his “dearest colleagues who protect and serve,” he added that he nonetheless warns his children about interacting with police officers outside of the Harvard campus.

Protest organizers and attendees alike highlighted the need for responses to the Ferguson jury’s decision to move beyond mass-protests and toward effecting concrete change.

“Don't let this protest be a Facebook profile picture,” said event co-organizer Fadhal A. Moore ’15. “Let this be a conversation.”

Event organizers expressed hope that events like the protest would spark action by students who may have become disillusioned with the system.

“One of the things I really wanted to make sure we do is have an action...having events like this allows people to protest that our justice system is not protecting us,” said Amanda D. Bradley ’15, another co-organizer of the event and a former president of the Association of Black Harvard Women.

Addressing the crowd early in the rally, Anthony A. Jack, a doctoral candidate in sociology and a Mather House tutor, described his hope for political solutions to racial problems in the United States, particularly on a local level.

“Mayors are invested in local communities in ways other elected officials are not. Mayor [Thomas M.] Menino taught me that. So we must ask mayors to invest in accountability measures for police,” he said. 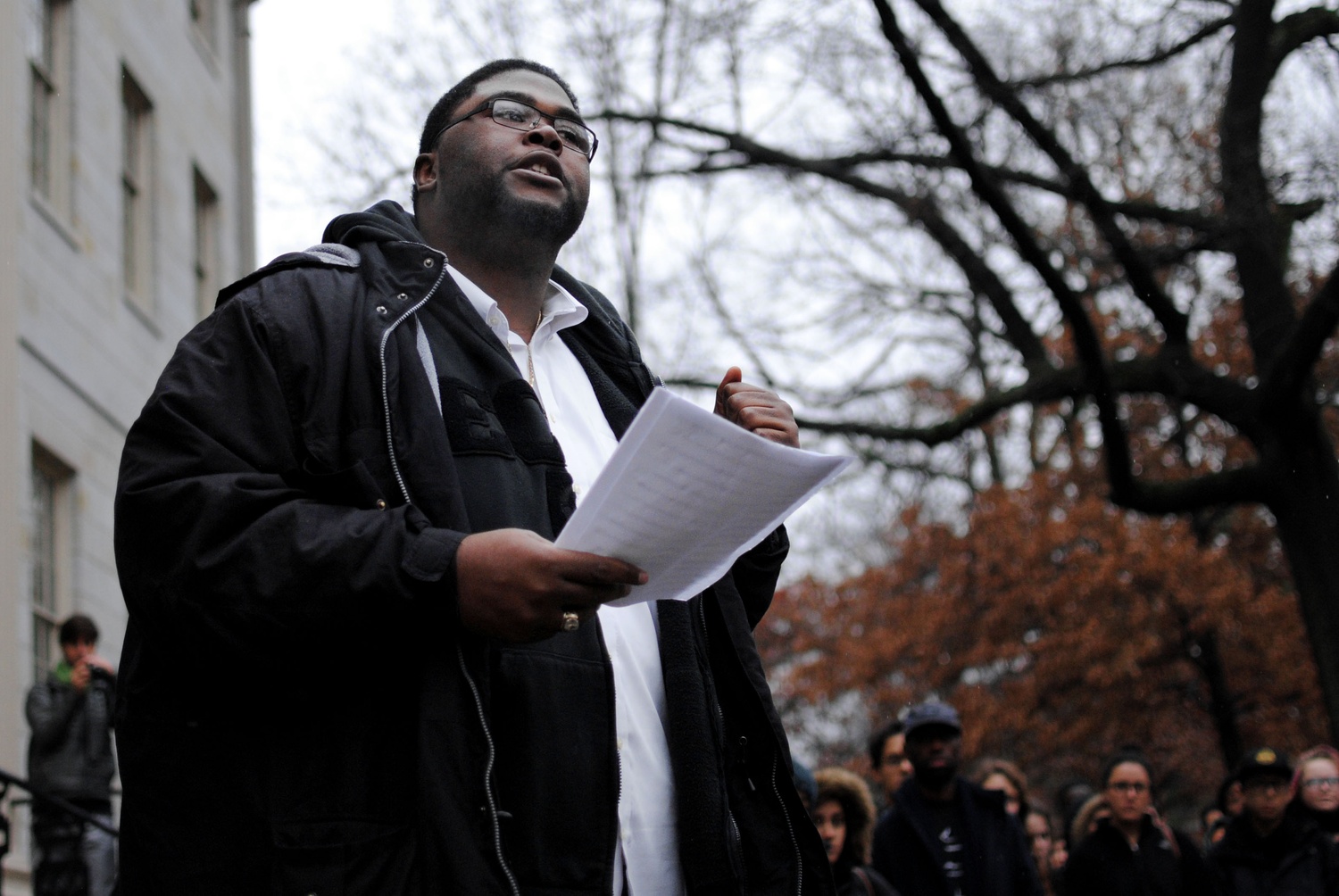 Mather House tutor Anthony Jack gives a speech at a protest Wednesday morning outside University Hall, stirred by the decision to not indict police officer Darren Wilson for the killing of a black, unarmed teenager, Michael Brown. By Tiana A Abdulmassih

Bradley and Moore, who are also co-chairs of a new IOP policy group on criminal justice and police interaction with communities of color, concluded by recruiting interested attendees to contribute to a forthcoming policy paper for the Massachusetts State House.

Among other notable University figures, Dean of the College Rakesh Khurana attended the protest. He declined to comment on the rally when approached by a reporter.

Late into Wednesday night, posters lining the path between the Widener and Lamont libraries remained with Bradley and Moore’s sobering message.

“Good luck with finals,” some read. “But remember black people are being killed in the streets.”

In a seperate event, more than 100 people gathered Wednesday night outside the Law School's Wasserstein Hall to hold a candle-lit vigil for Eric Garner, a black man who was killed by police officers in New York City in July. A New York grand jury declined on Wednesday to indict the police officer who put Garner in a chokehold.

—Staff writer Quynh-Nhu Le contributed to the reporting of this article.