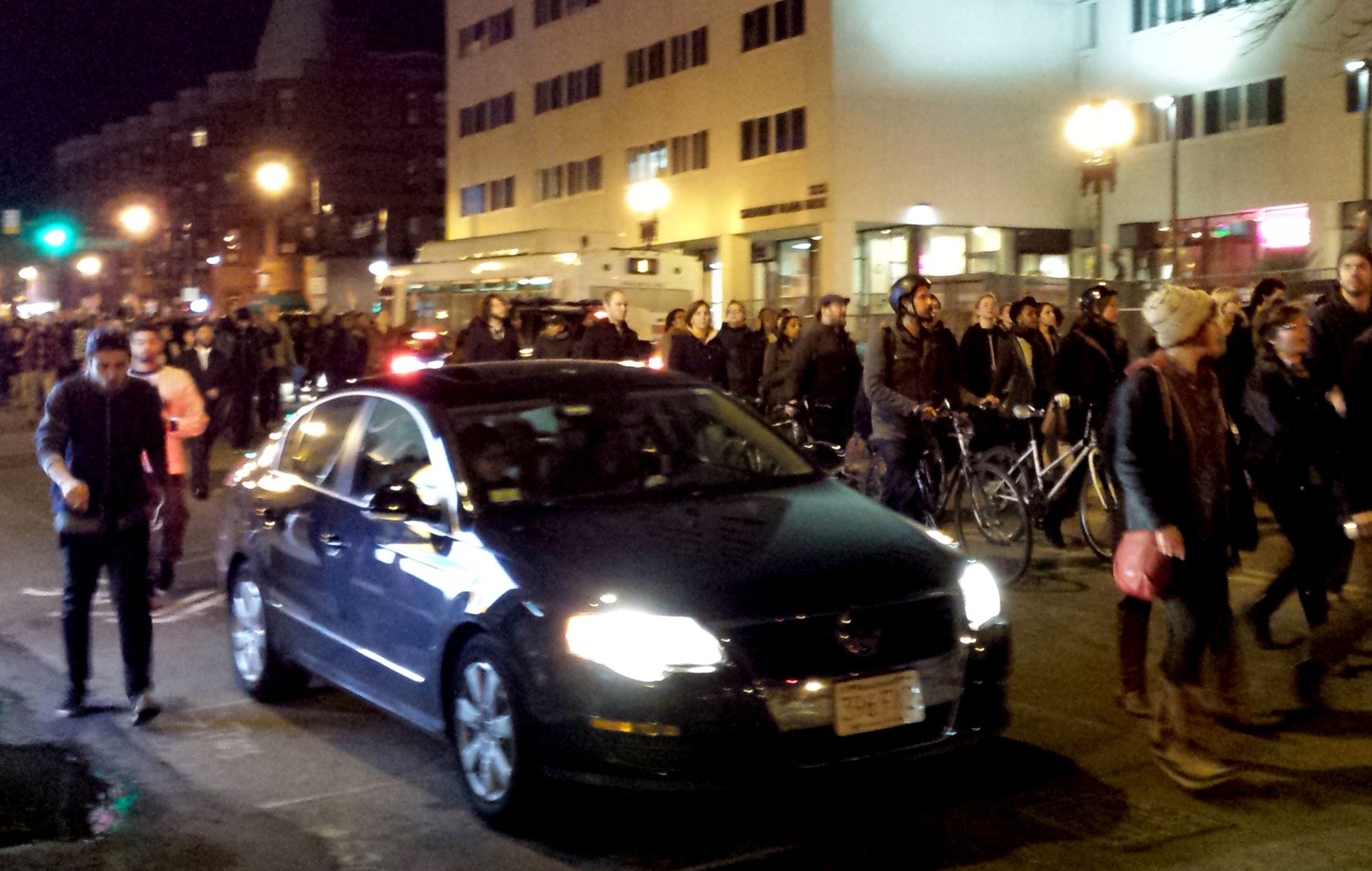 Boston community members march on Massachusetts Avenue to protest a grand jury’s decision to not indict a police officer in the death of a black teenager in Missouri on Tuesday, November 25. Dozens of Harvard students joined the city-wide rally.
By Quynh-Nhu Le, Crimson Staff Writer

Rachael C. Stein ’17 was arrested in Boston last Tuesday evening on a “disorderly person” charge at a rally protesting a St. Louis County grand jury’s decision not to indict a white Missouri police officer who shot and killed an unarmed black teenager.

Stein, along with dozens of other protesters arrested that night, was arraigned Wednesday morning in court. Like others, Stein’s misdemeanor charge was downgraded to a civil infraction. 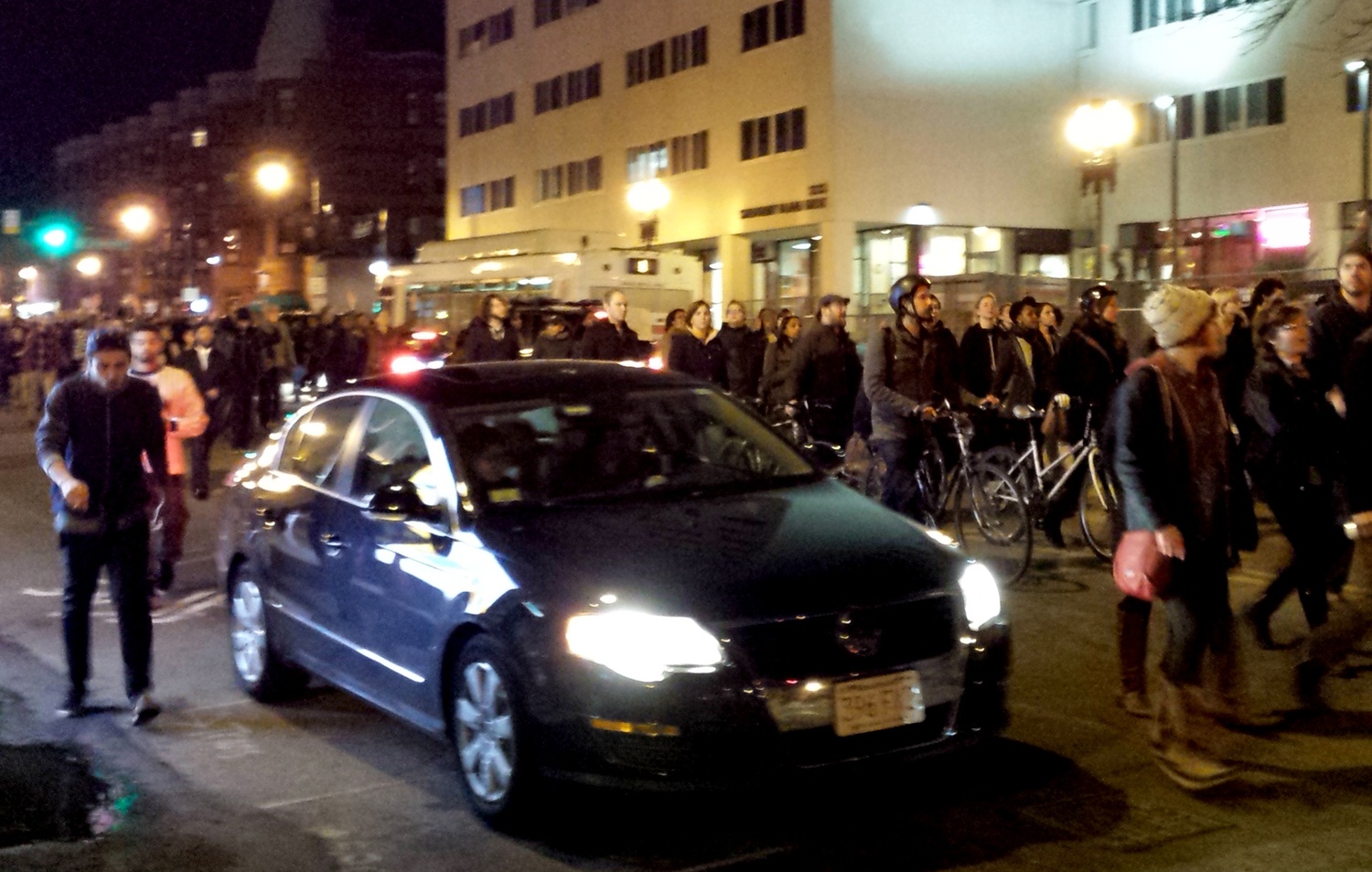 Boston community members march on Massachusetts Avenue to protest a grand jury’s decision to not indict a police officer in the death of a black teenager in Missouri on Tuesday, November 25. Dozens of Harvard students joined the city-wide rally. By Y. Kit Wu

According to Stein, she had been at the front of the rally at the time of her arrest, facing police officers who blocked the protesters' entrance to Interstate 90 near South Station.

Stein alleged that “unnecessary force was used in the arrests,” including her own. The Boston Globe reported that other protesters have made similar allegations.

Stein, who went to the hospital to have her injuries documented after her arraignment, said she suffered a mild concussion and damage to her ear cartilage from being forced down during her initial arrest. She also said she experienced wrist abrasions and tendon and nerve compression resulting in loss of sensation in her arm from her restraints.

While the arrested protesters are currently filing incident reports, Stein said it is presently “unclear” whether they will come together to file for alleged police brutality.

Both Stein and Martinez-Pandiani expressed their surprise at the perceived violence during the arrest, characterizing police officers as otherwise “stoic” throughout the night.

“The policemen in general were very calm, very serene, and very understanding…. That was important for the peaceful protest,” Martinez-Pandiani said.

Keyanna Y. Wigglesworth ’16, who attended the rally and left after the group reached the I-90 entrance, said she saw only one forceful interaction when police officers knocked down protesters who had latched onto a truck being let into the blocked highway.

“I don’t think it was as violent as I think it could have been,” Wigglesworth said.

Stein was back on the streets Friday participating in a smaller demonstration related to the Ferguson decision. Roughly 50 demonstrators marched outside the Prudential Center in a protest organized by Black Lives Matter Boston, which had also planned Tuesday’s rally.

Stein said her arrest at Tuesday’s protest has only increased her desire to attend similar protests.

“The fact that people were arrested at a peaceful protest because they were rightfully outraged is perpetuating my anger on this issue and making me want to participate even more [in similar protests],” Stein said. She added that she hoped her experience does not discourage people from participating in similar protests, particularly “white allies.”

“If there’s any further action, I’d probably go, and get as many Harvard students as I can to go with me,” Stein said.