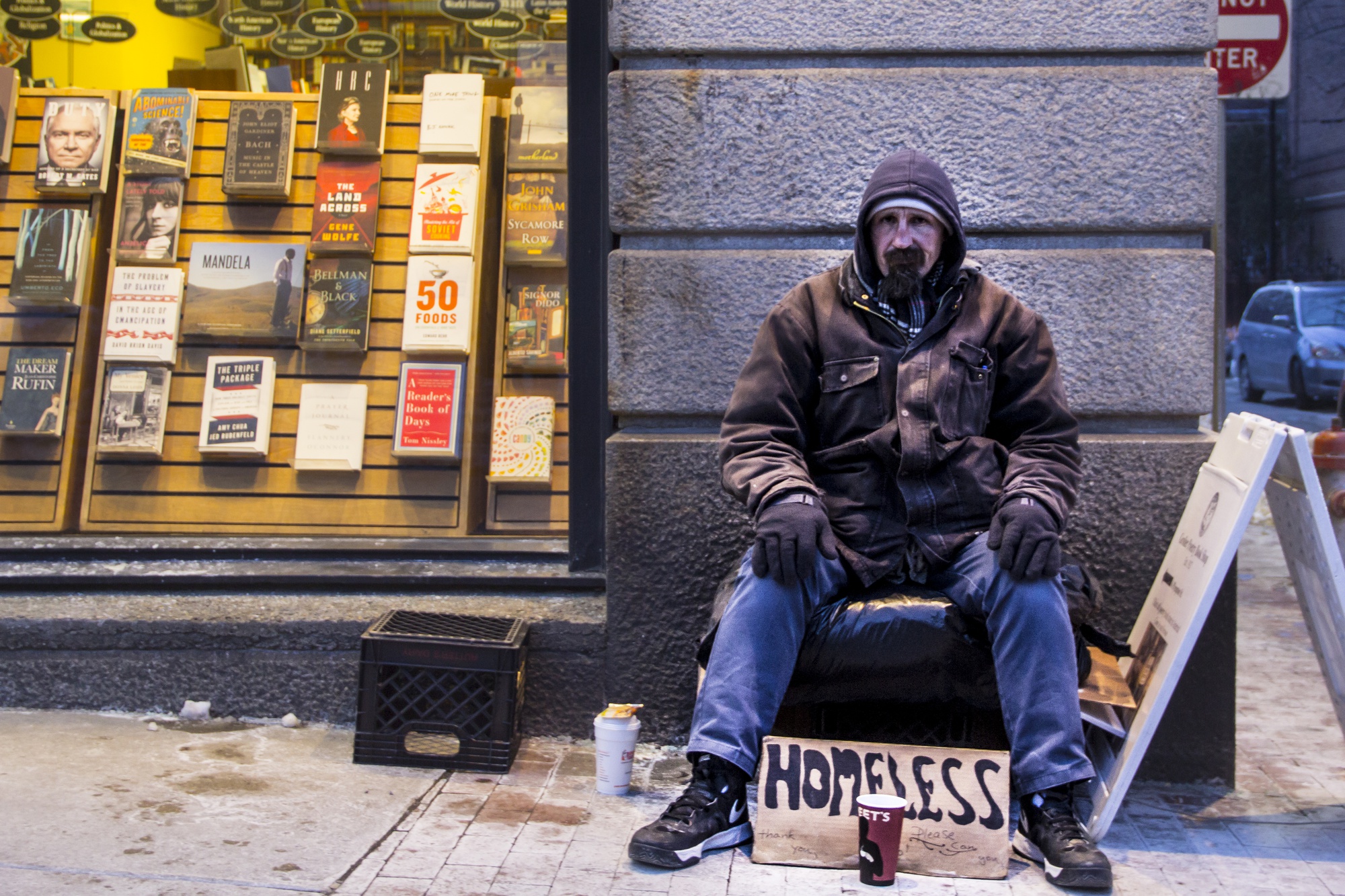 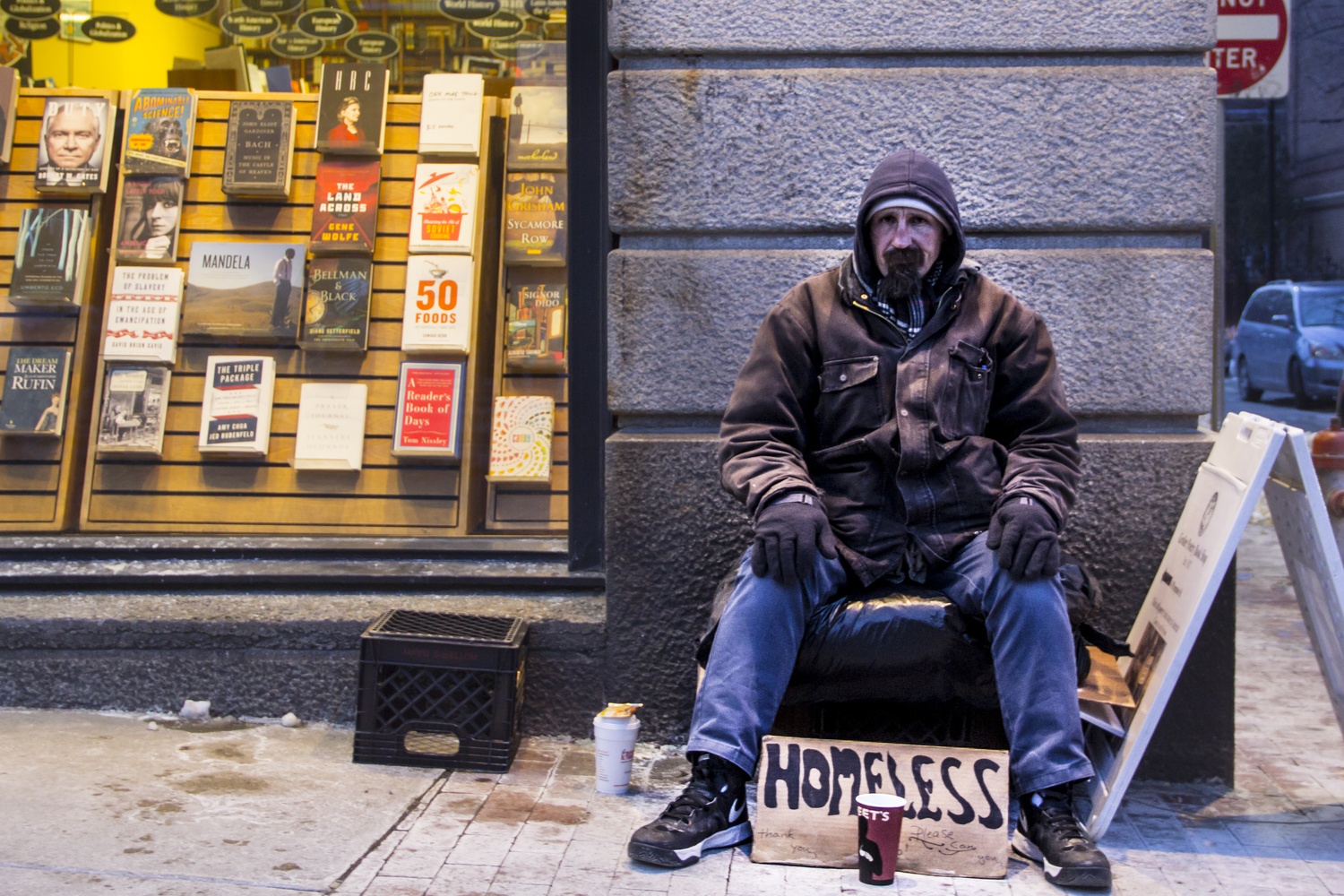 Davie, who prefers to be identified by his last name, says his usual winter outfit consists of two t-shirts, a sweatshirt, three coats, a pair of pants, basketball sneakers, two pairs of gloves, and two scarves. By Zorigoo Tugsbayar

This is the first in an occasional semester-long series on homelessness in Harvard Square.

The winter of 2013-2014 has not been an easy one for Harvard Square’s homeless population, but most winters are not. With nearly a foot of snow last week and more in the forecast, the weather has exacerbated existing shortages in space and resources at area shelters and placed added burdens on the population that spends most of its days on the street.

For these and others, who choose not to stay in shelters but in public spaces out of safety concerns, dangerous cold and precipitation can lead to health risks from pneumonia to frostbite.

Gary Martin, a native Cantabrigian who has now been homeless for seven years, said that he and his life partner Whitney have passed most nights this winter sleeping in Winthrop Square, the small park enclosed by JFK, Winthrop, and Mt. Auburn streets.

Davie, who preferred not to be identified by his first name, is a European immigrant who has been living on the streets of Cambridge for two years. He said that he prefers to sleep at the Harvard Square Homeless Shelter, housed in the the basement of the University Lutheran Church on Winthrop St., which is run and staffed primarily by College students. But beds at the shelter are lotteried, and, on cold nights when more people are vying for a spot, Davie is often left to camp in a “private spot” outdoors

“I meditate—that’s how I deal with this weather,” Davie said, “I’ve sat in the Polar Vortex, every Polar Vortex we’ve had...if you meditate, you become warmer.”

Davie is not alone in remaining outdoors. According to Mary Shannon Thomas, a social service worker specializing in homelessness cases, a significant portion of the Cambridge homeless population remains outside during severe cold spells and snowstorms.

With most homeless shelters in Cambridge are at full capacity normally, Shannon said expansion is difficult during harsh weather.

“Particularly in the winter, there’s always more need than there are beds,” she said.

David K. Tang-Quan ’15, a Harvard Square Homeless Shelter administrative co-director, explained that while the shelter stays open all day during snow storms and distributes warm clothing and food to those on the streets, it does not have the room to significantly expand in winter weather.

“Unfortunately, we’re always at capacity,” he said, citing fire codes that limit the number of guests. Tang-Quan said that the shelter does add five emergency beds every night the temperature drops below freezing, putting the shelter at capacity nearly every night of the winter.

At the Salvation Army in Central Square, space is more flexible, but other resources are stretched thin. According to Director of Operations Karen Meahan, the shelter sets up an additional 15 emergency beds and lets people sit inside to keep warm during cold weather, but the shelter is also spending almost twice as much on food.

“You can only add so much water to the soup before it’s no longer soup,” said Lieutenant Michael Harper, a Salvation Army Corps officer.

Yet, despite these available resources, Thomas said that many homeless people feel safer staying out in the cold rather than in the shelter.

“One of the guys I worked with has PTSD, a shelter for him is one of the most terrifying places you could put him,” she said. “There’s too much noise, there’s too many people, there’s too much stuff going on in the environment, and for him, being outside where it’s 15 degrees feels safer than being in a crowded shelter.”

Shannon said that she has seen cases of frostbite, but could not specify its prevalence because not all the population used shelter or health services.

Martin, 48, said that he had passed several snowstorms outdoors this year, resulting in multiple bouts of pneumonia.

“Pretty cold,” he said of this winter, rubbing his gloved hands together.

“Hopefully, another year, and then I’ll get back to the warm country,” said Davie, referring to California, where he was residing prior to coming to Cambridge.  “I really don’t want to see another winter here in Massachusetts. This is a bad one.”