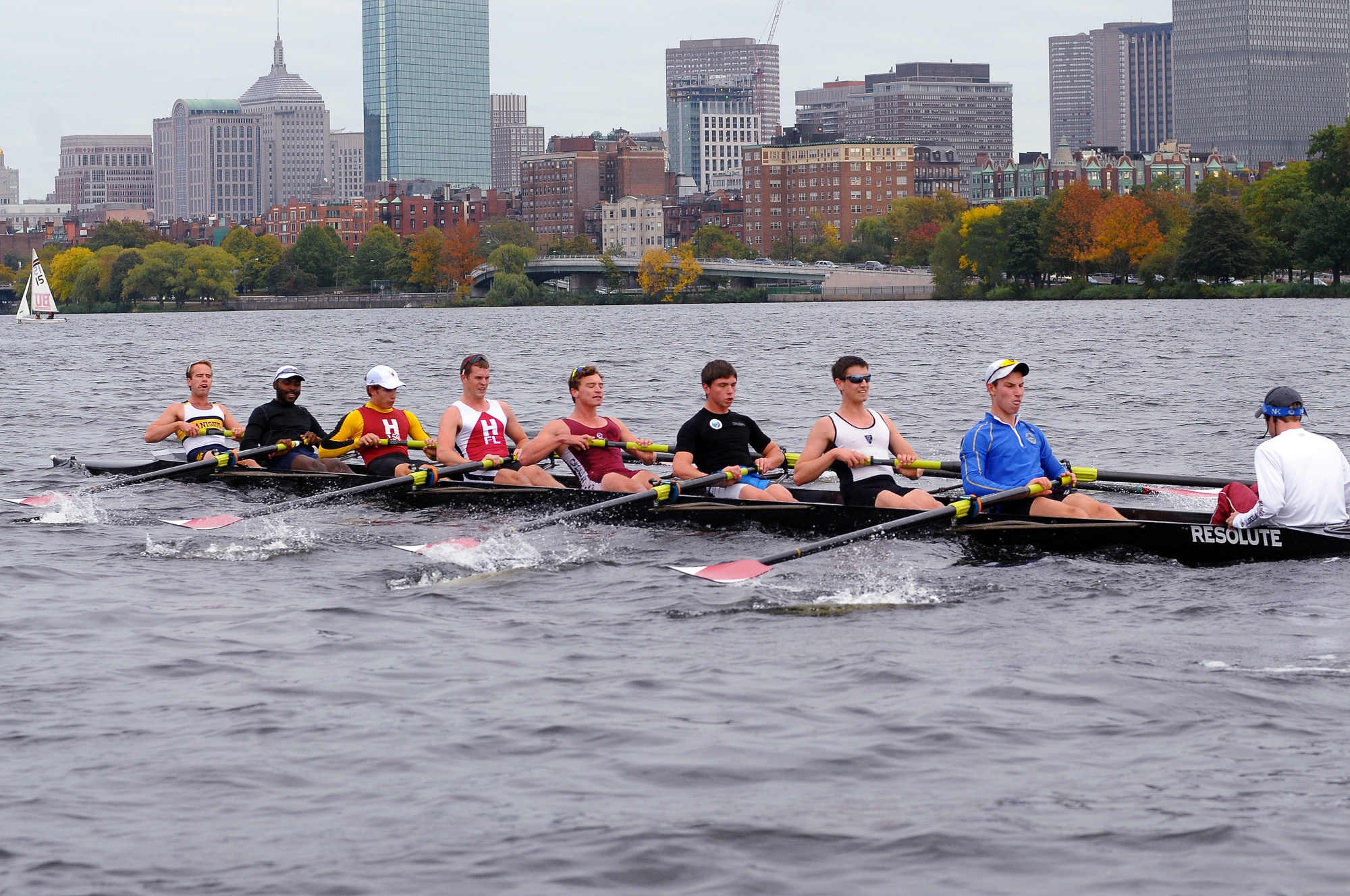 As the spring racing season gets underway, both the Harvard men’s heavyweight and lightweight crews posted strong showings this weekend against local and Ivy League competitors.  The No. 1 heavyweights travelled to the Seekonk River on Saturday to challenge Brown in the Stein Cup, capturing the first varsity race but falling to the Bears in the second varsity race by a close margin.  The No. 4 lightweights defeated MIT and Dartmouth at home on the Charles River on Saturday to win the Biglin Bowl.

The Harvard heavyweights captured their fourth-straight Stein Cup on Saturday despite some tough competition from the Bears. The Crimson’s first varsity boat defeated Brown in the championship race, posting a time of 5:46.3, almost five seconds ahead of the Bears.

“Coming off a long winter’s training, the whole squad [was] in great shape physically for [Saturday’s] race with Brown,” captain Andrew Holmes said. “Today was our second race of the season, coming off a good first race against Cornell. There are still improvements to be made, but I feel that the whole team has had a strong start to the season.”

The 2V race was the closest of the morning, with Brown edging out the Crimson by less than a second.  In the freshman eight, Harvard dominated the Bears, finishing in 6:02.6 with a 5.9-second margin of victory.

“Against Brown, every boat races really hard and showed good speed,” Holmes said. “The standout performances came from the freshman eight and the second Varsity boats. Both boats showed that they were capable of going fast in the last quarter of a high-paced race, which is a great sign for the next few races in the season.”

Harvard fell to Brown in the third varsity, fourth varsity and second freshman races, but the winning races were promising for the Crimson heavyweights.

“Going into this race we just wanted to have a solid performance and focus on our own rowing and not worry too much about anything else,” Holmes said. “The team is really benefiting from the younger classes, especially the juniors and sophomores. In terms of their work ethic and focus, they are really pushing the limits and raising the bar for the rest of the team.”

The Harvard lightweights bested competition on Saturday, sweeping all four races in the morning.  The Crimson first varsity boat had strong results against MIT and Dartmouth, securing the Biglin Bowl for the sixth-straight year, and 51st time overall.

“It was a good progression, a good improvement on last weekend,” captain Alexander Bonorris said. “Obviously we were hungry, we wanted an opportunity to show we’re making improvements week to week and I think we did that today.”

“I thought this weekend went really well,” Bonorris said. “It was sweet. The 1V won with a four-second margin on MIT, and MIT beat Dartmouth by a few seconds, so we got clear water, which is good.”

The freshman eight competed in the second varsity race, posting a 5.1-second lead over their Crimson teammates and more than a 10-second lead on the Big Green crew, showing the strength of the young Harvard rowers and the bright future of the heavyweight program.

“The freshmen raced the second varsity, and they did really well,” Bonorris said. “It’s always nice to see a competitive inter-squad race like that.”

The Crimson third varsity boat finished in 6:40.3, posting nearly a 20-second lead over Dartmouth and an even greater one over the Engineers.  The second freshman boat raced as two fours, with the Harvard 'B' crew finishing in 7:52.9, the Harvard 'A' crew posting a time of 8:10.6, and the Dartmouth 4V crossing the line in 8:15.3.

“The crew is also happy with the step we made,” Bonorris said. “It’s always good to race hard and do well on your own course, so we were really happy with that.”

With the fast start to their season, the Harvard lightweights are looking forward to continued improvement and tough competition down the line.

“We saw some more results today from other teams in the league,” Bonorris said. “It’s very clear that the competition is really tight this year, really strong. I’d say it’s anybody’s race, anybody’s season. It’s exciting, we’ve got a lot of youth in our boat, and each week we’re getting a lot better. We’re making the improvements to prove that we can be a championship crew in the weeks to come.”