Announcement Comes During an Open Discussion Sponsored by the UC 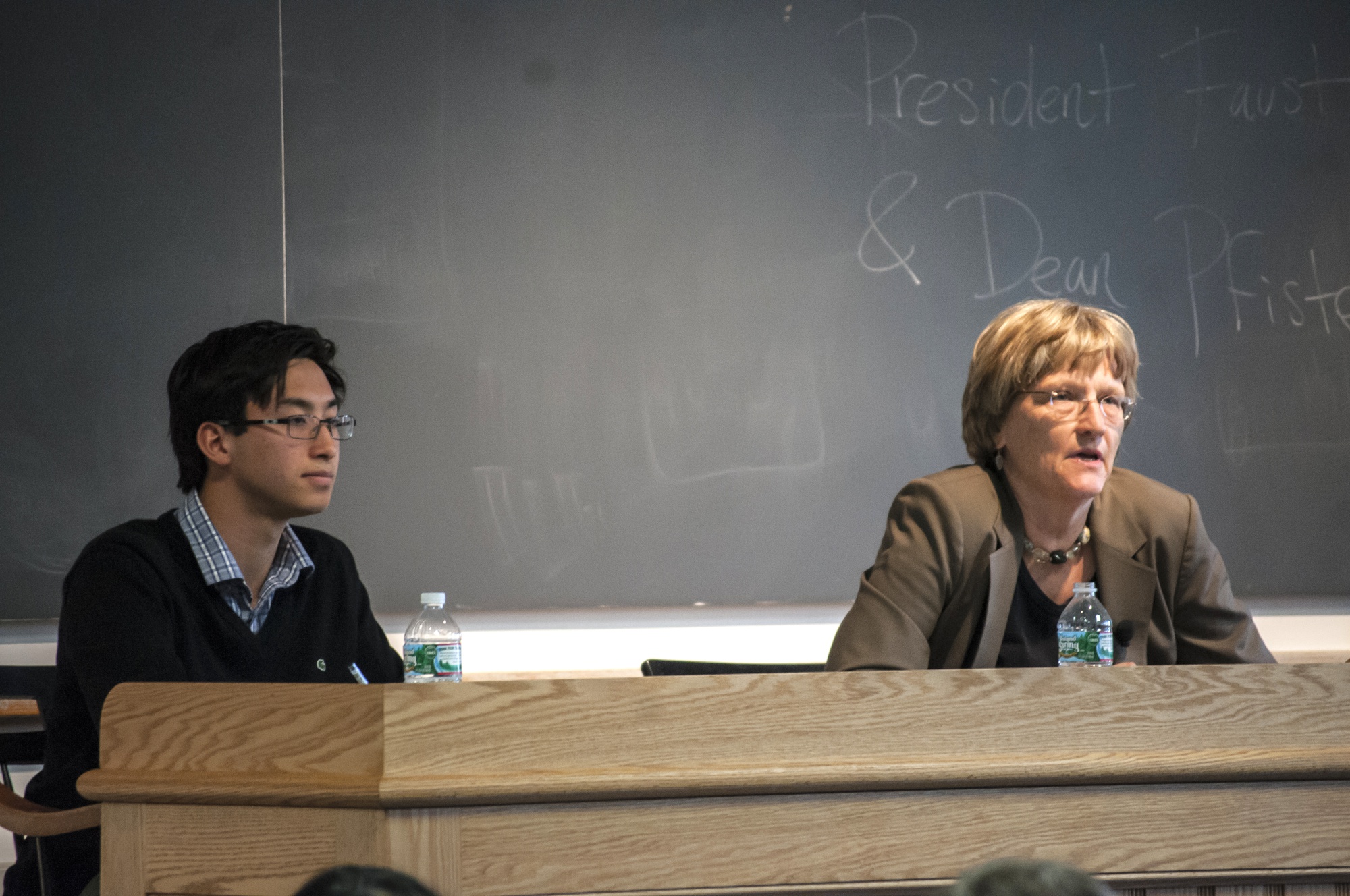 At an open forum sponsored by the Undergraduate Council Thursday, University President Drew G. Faust announced that Harvard has submitted a revised sexual assault policy, updated to align with recent changes to federal Title IX regulations, to the Office of Civil Rights in the Department of Education.

If approved, the policy would mark the first time all schools within the University would be required to comply with the same set of regulations regarding sexual assault. 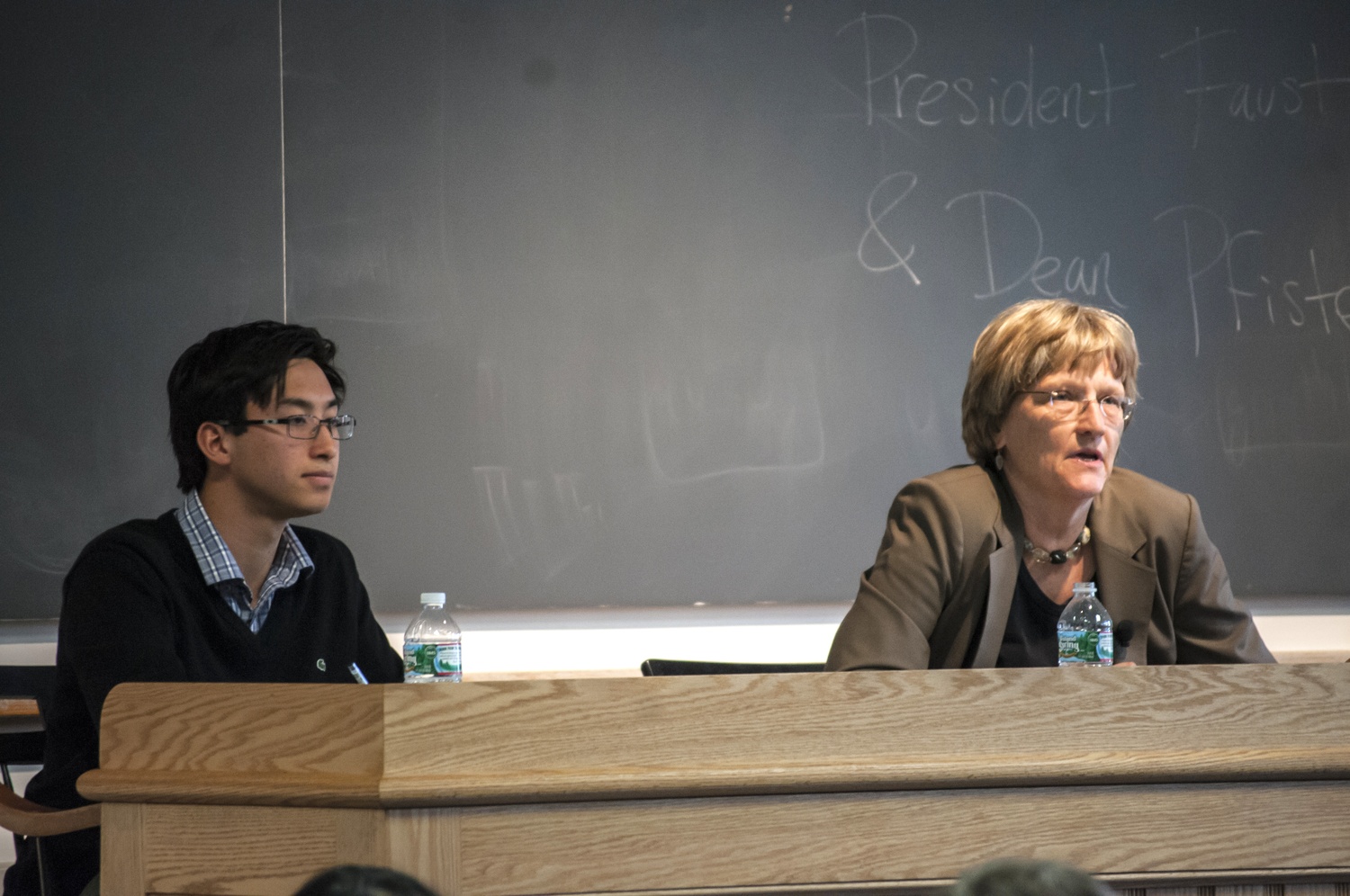 UC Vice President Sietse K. Goffard ‘15, left, listens to University President Drew G. Faust as she answers a question during an open meeting with the student body. By Zorigoo Tugsbayar

In addition to detailing the legal, educational, and preventive components of the University’s approach to sexual assault and misconduct on campus, Faust fielded questions on a range of issues in the forum. including student organization funding and race relations.More than 60 college students and Interim Dean of the College Donald H. Pfister attended the event.

The updated sexual assault policy is the product of a working group convened in May 2013 to evaluate both school-specific and University-wide policies to ensure that Harvard’s practices conform to Title IX of the Education Amendments of 1972, which prohibits sexual harassment and broader gender-based discrimination in education programs that receive federal funding.

Faust's announcement about the updated policy comes after an op-ed published by The Crimson earlier this month sparked campus-wide conversation on the issue of sexual assault and Faust announced the creation of a task force focused on community awareness and prevention.

“We needed to really look hard at preventing this in the first place, and that is the responsibility of the entire Harvard community,” Faust said at the forum.

Throughout the question-and-answer period, Faust responded to a series of questions from students, many of whom belonged to student organizations that have recently demanded changes to College and University policy. Though students said they appreciated the opportunity to speak directly to the University president, some characterized her responses as vague and, at times, evasive.

In the question that prompted Faust to explain the University’s approach to sexual assault issues, Jessica R. Fournier '17, a co-organizer for Our Harvard Can Do Better, a student group devoted to reforming Harvard’s sexual assault policies, asked why undergraduates were not on the University working group on the issue that was convened last year.

Faust responded by explaining that the previous year’s working group was focused on the legal issues of sexual assault, while the recently announced task force, which includes two undergraduate students, addresses community issues of education, prevention, and support.

Still, Emily M. Fox-Penner '17, another organizer for Our Harvard Can Do Better, said that she had hoped to hear a “more concrete strategy” to involve a wide range of student voices on the issue.

On the topic of campus community, Kimiko M. Matsuda-Lawrence ’16, writer and director of the play, “I, Too, Am Harvard,” which propelled a campus-wide conversation on inclusion and identity in March, asked about the concrete changes expected from the working group announced by Pfister and his incoming successor Rakesh Khurana earlier this month.

Faust said that she predicted that the group may explore how to approach conversations during freshman orientation and the ways of building community to support diversity, such as through a multicultural center.

After the forum, Matsudo-Lawrence said she is still waiting on further details on the working group.

“We’re all just waiting to hear what the working group will be, what shape it will take, what it will actually be producing,” Matsudo-Lawrence said.

Touching on another hot-button campus issue, Leah C. Singer '16, chair of the UC Finance Committee, asked Faust the UC’s funding issues and its efforts, unsuccessful so far, to increase its annual budget. Faust referred the question to Pfister, who expressed support for UC funding efforts, but emphasized that Harvard continues to face budgetary constraints and the lack of flexibility in shifting money to student groups.

Singer said after the forum that she understood their answers, but expressed frustration that “nothing new was presented on the conversation.”

Harvard’s endowment also came up in the question-and-answer session. Blake McGhghy ’17, a member of the Responsible Investment at Harvard Coalition, asked Faust if she believed the practices at Harvard-owned Argentinian plantations aligned with the University’s values.

Faust then called on McGhgy and others to read an op-ed published Wednesday by Andrew G. Wiltshire, head of alternative assets for the Harvard Management Company, which she said detailed “misstatements” that Responsible Investment at Harvard has propagated. Faust implored members to “look at those facts” and recognize that “any debate about responsible investment must begin with the facts.”

In addition, Faust faced questions regarding the loss of summer storage space in undergraduate Houses undergoing renewal and the absence of Latino studies programs on campus, among other topics.

UC President Gus A. Mayopoulos '15 and Vice President Sietse K. Goffard '15 described administrators’ responses as constructive and honest, but acknowledged that “the student advocates were definitely looking for more in [Faust’s] answers.”

Mayopoulos said that although various administrators have listened to the Council’s concerns, communication could be improved.

“It would be nice for us to have partners in the administration who worked with us to make these changes happen instead of denying us the changes that students want,” he said.