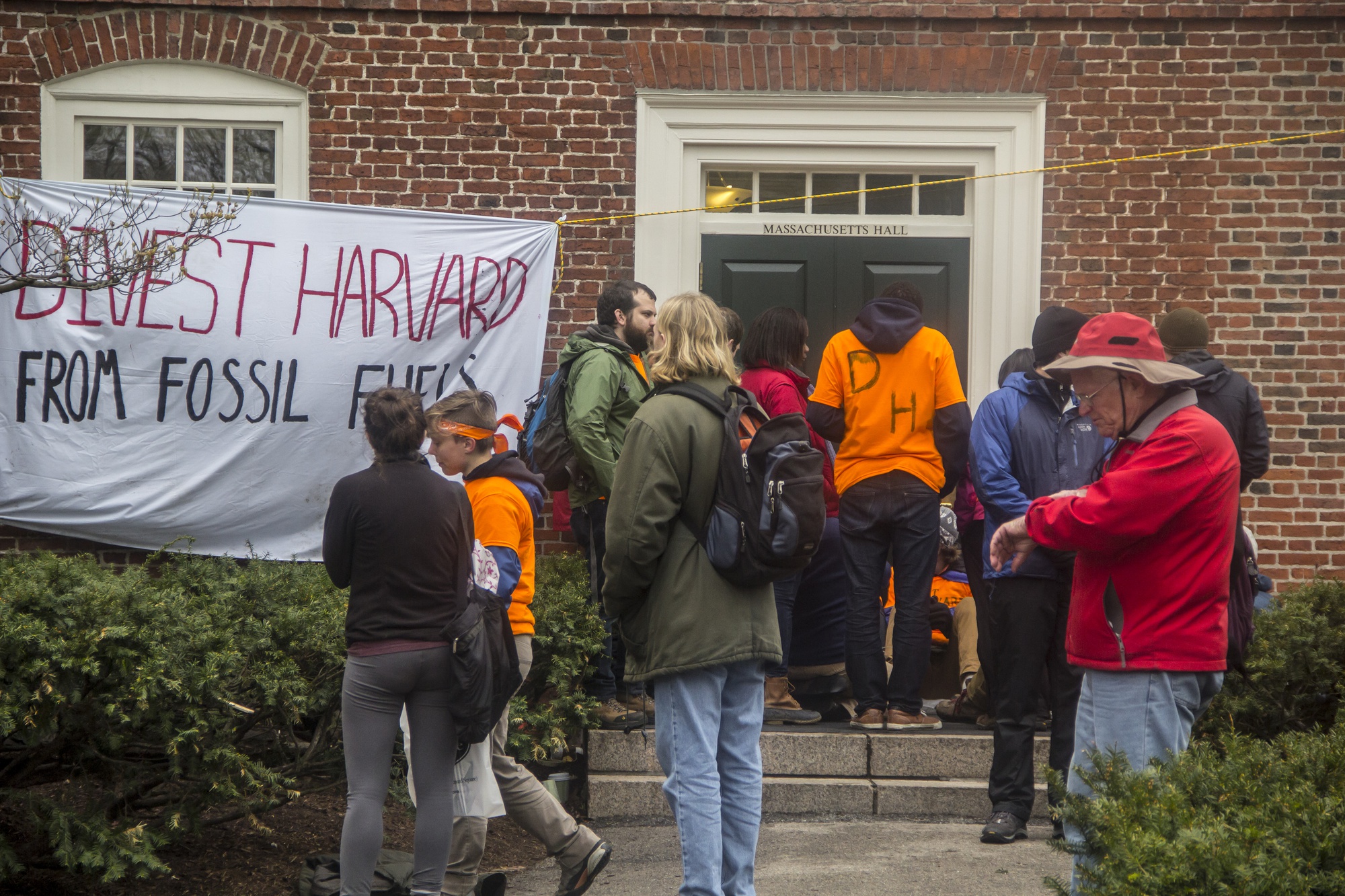 Divest Harvard activists blockaded one of the entrances in front of Massachusetts Hall to protest against the University's continued investment in various fossil fuel companies.
By Amna H. Hashmi and Kristina D. Lorch, Crimson Staff Writers 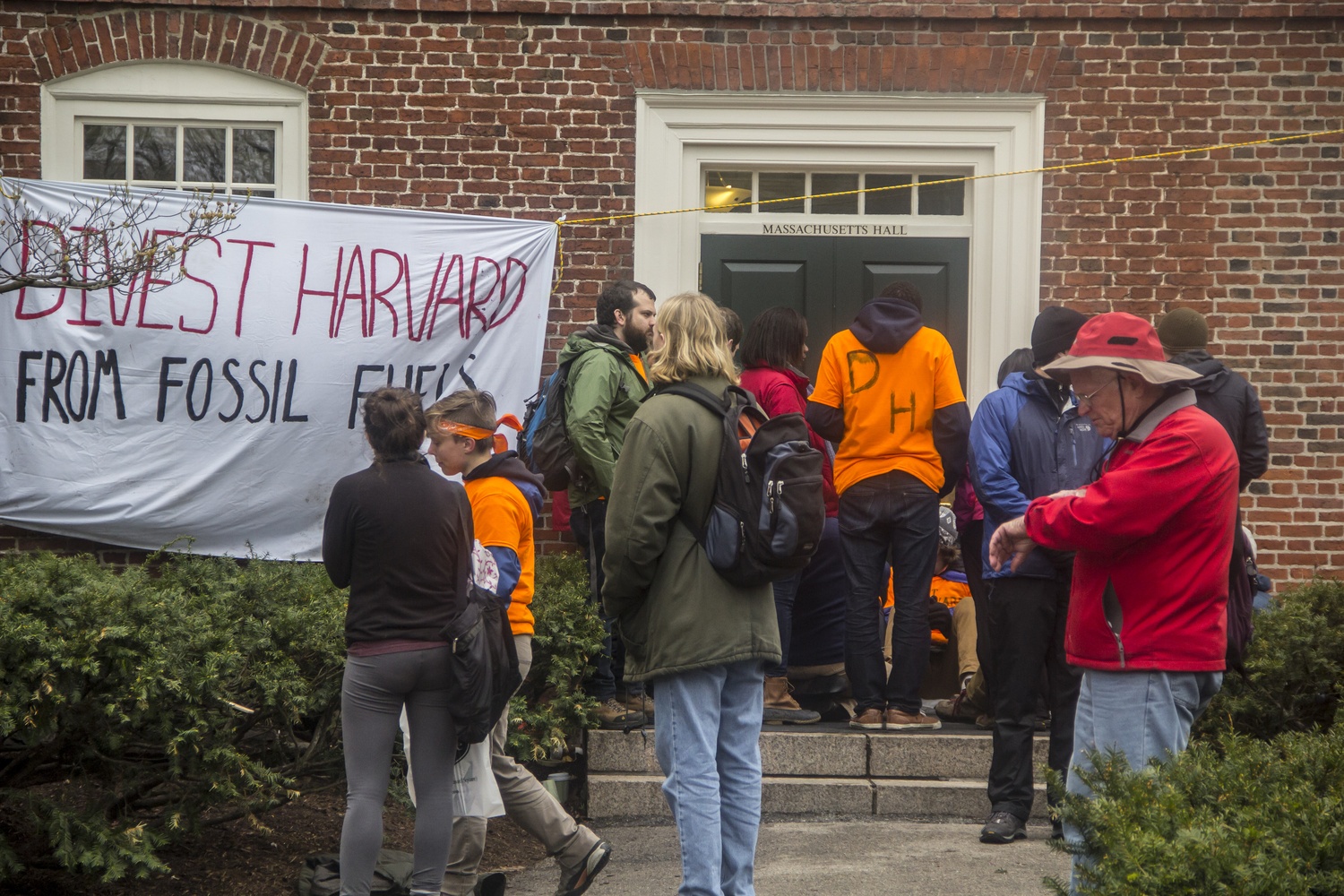 Several students stationed themselves in front of an entrance to Massachusetts Hall beginning at 6 a.m. Wednesday, blocking the main entrance to the offices of the University’s top administrators in an effort to secure an open meeting with the Harvard Corporation regarding fossil fuel divestment.

The maneuver kicked off the activist group Divest Harvard’s Day of Action, the latest effort in a two-year-old campaign calling for the University to divest its endowment from the fossil fuel industry.

According to a Divest Harvard press release, their campaign is one of over 400 similar pushes for divestment from the top 200 publicly traded oil, coal, and gas companies on campuses around the world.

In an October 2013 letter to the Harvard community, Faust reaffirmed that stance, writing that the University’s role as an academic institution is to support research to accelerate the transition to renewable sources of energy. Earlier this month, she announced a number of sustainability initiatives to address the risks of climate change.

In a series of rallies and speeches throughout the day, faculty members, alumni, and Cambridge community leaders spoke to a crowd of dozens of students and passersby on the importance of divesting and student activism more broadly.

The morning rally featured Cambridge City Councillor Leland Cheung and environmental activist Bob Massie, among others, who expressed their support of the divestment movement. 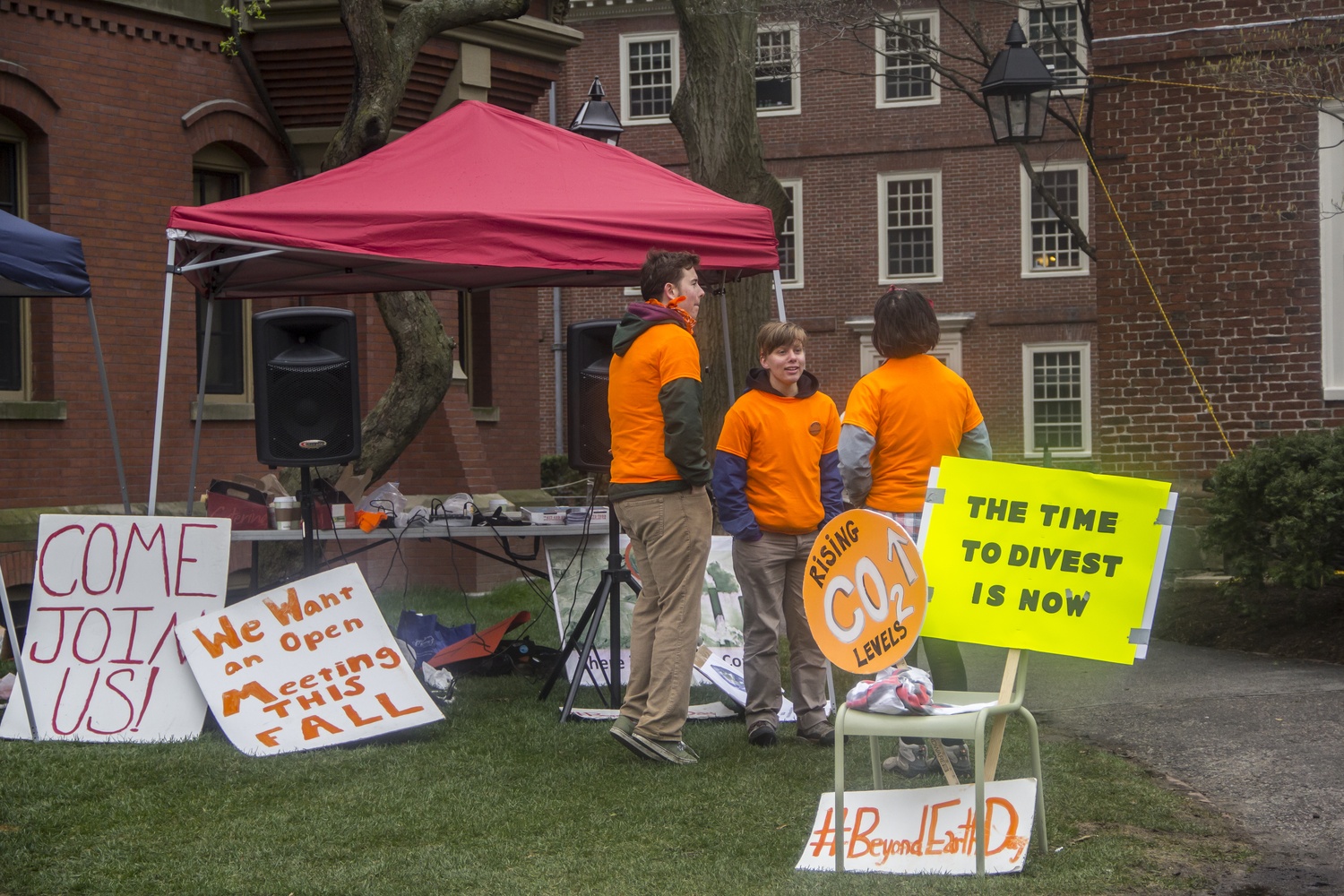 At noon, writer Wen Stephenson ’90—one of more than 800 Harvard alumni who have signed an open letter to Faust calling for fossil fuel divestment—drew applause from the crowd when he said, “The climate crisis isn’t going away, and neither are we.”

Shoshana Zuboff—a retired Business School professor and the only signatory representative of the Business School from more than 180 Harvard faculty members who have signed a similar petition—similarly spoke of Harvard’s responsibility as a “respected institution of knowledge.”

“There has not been an open dialogue. President Faust has unilaterally stated certain positions without evidence-based reasoning,” Zuboff said. “This is a university, and what we stand for is debate based on evidence and full, solid reasoning. It has been set aside, it has been suppressed.”

As the day progressed into the afternoon, various student organizations came together for a conversation on justice and activism on campus. Representatives from Harvard’s Student Labor Action Movement, Our Harvard Can Do Better, and the Responsible Investment at Harvard Coalition, along with Tufts and Brandeis students were present during the conversation.

Students spent much of the conversation discussing activism methods and the use of “shaming techniques,” such as a filmed confrontation of Faust by a member of Divest Harvard and the recent SHAME tour conducted by Responsible Investment at Harvard, to push for change in the administration.

Sandra Y. L. Korn ’14, a Crimson editorial editor, said that shaming is "really powerful in galvanizing support, but it didn't put pressure on the administration."

Many students said they believed that leveraging federal law and University funds by drawing on donor support is a more effective means to securing administrative support.

While members of Divest Harvard said they did not know whether Faust was in her office during the event, a University official confirmed that Faust was in Washington, D.C., at a meeting of the presidents of member institutions of the Association of American Universities.

“We recognize that members of our community have a variety of perspectives on how to respond most effectively to the serious dangers posed by climate change,” University spokesperson Kevin Galvin wrote in a statement. “President Faust, other members of the Harvard Corporation, and representatives of Harvard Management Company have discussed these issues on many occasions, including multiple meetings with Divest Harvard.”

Dean of Student Life Stephen Lassonde was the only member of the administration to address the blockade, according to Divest Harvard coordinator Chloe S. Maxmin ’15. Maxmin said that Lassonde spoke to the crowd in the morning and said that while the students had a right to protest, they may face disciplinary action since they were blocking a building entrance.

About four Harvard University Police Department officers stood at the outskirts of the rally to monitor the situation. Because the Divest Harvard students only blockaded one entrance to Massachusetts Hall and there were other ways into the building, an officer said the rally was not disruptive and the coalition was entitled to its free speech.

When asked how long the blockade would last, Maxmin said that Divest Harvard’s position is that “it is completely in the hands of the administration” and did not offer a specific timeframe in mind.