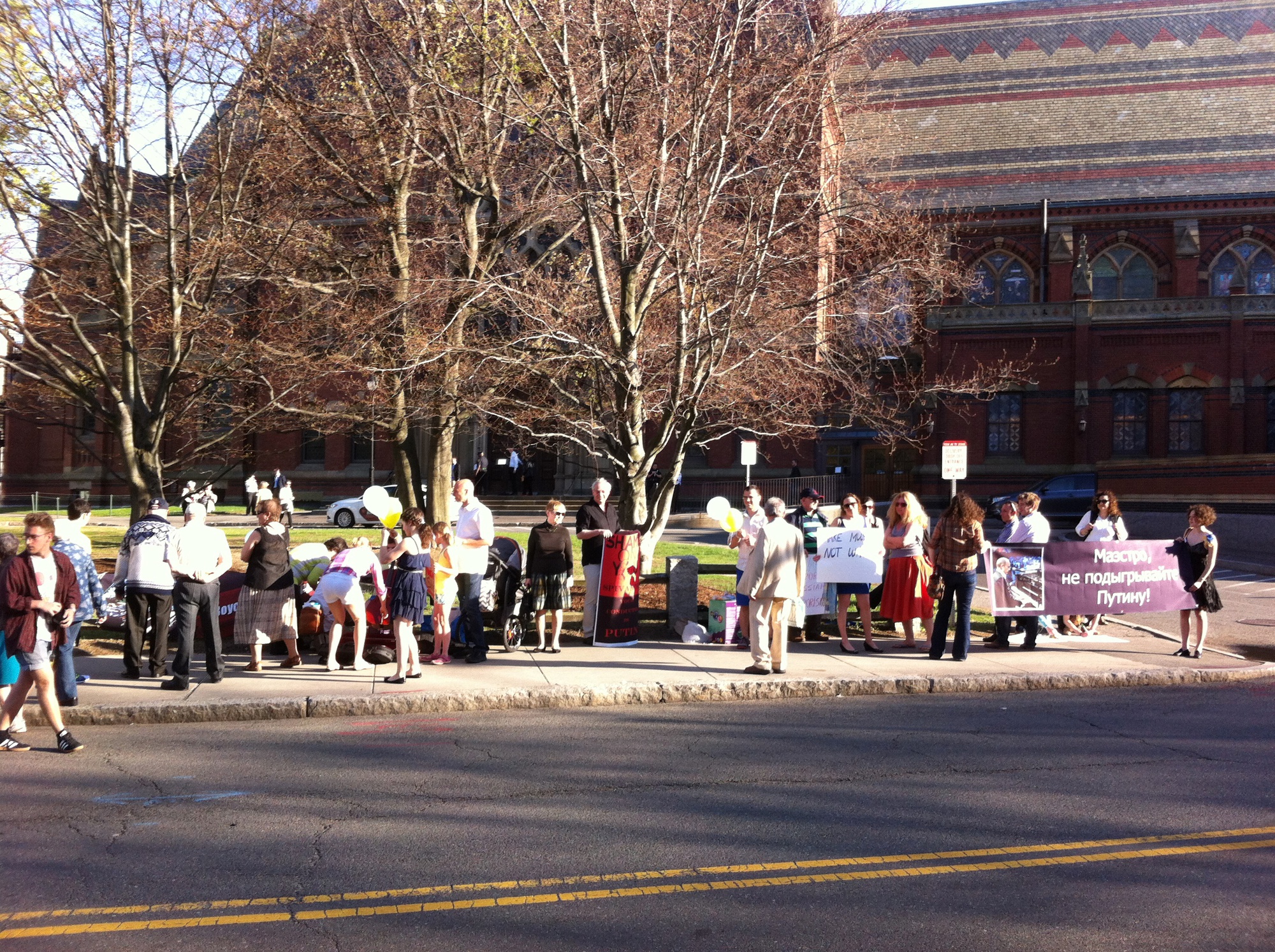 Protesters of violinist Vladimir T. Spivakov stand outside Memorial Hall on Sunday evening, where the Russian violinist was performing.
By Dev A. Patel, Crimson Staff Writer

A crowd of about 40 people held banners, waved balloons, and even played classical music outside of Sanders Theatre on Sunday to protest violinist Vladimir T. Spivakov, who performed there that evening, for the musician’s support of Russian President Vladimir Putin’s actions in Ukraine.

The protesters, ranging from Ariella P. Katz, a student at Brookline High School, to David Gamarnik, a professor at the Massachusetts Institute of Technology Sloan School of Management, gathered on the sidewalk on the north side of Memorial Hall clutching posters with messages like “Make Music, Not War” and “Shame on Spivakov, Your Conductor is Putin.” 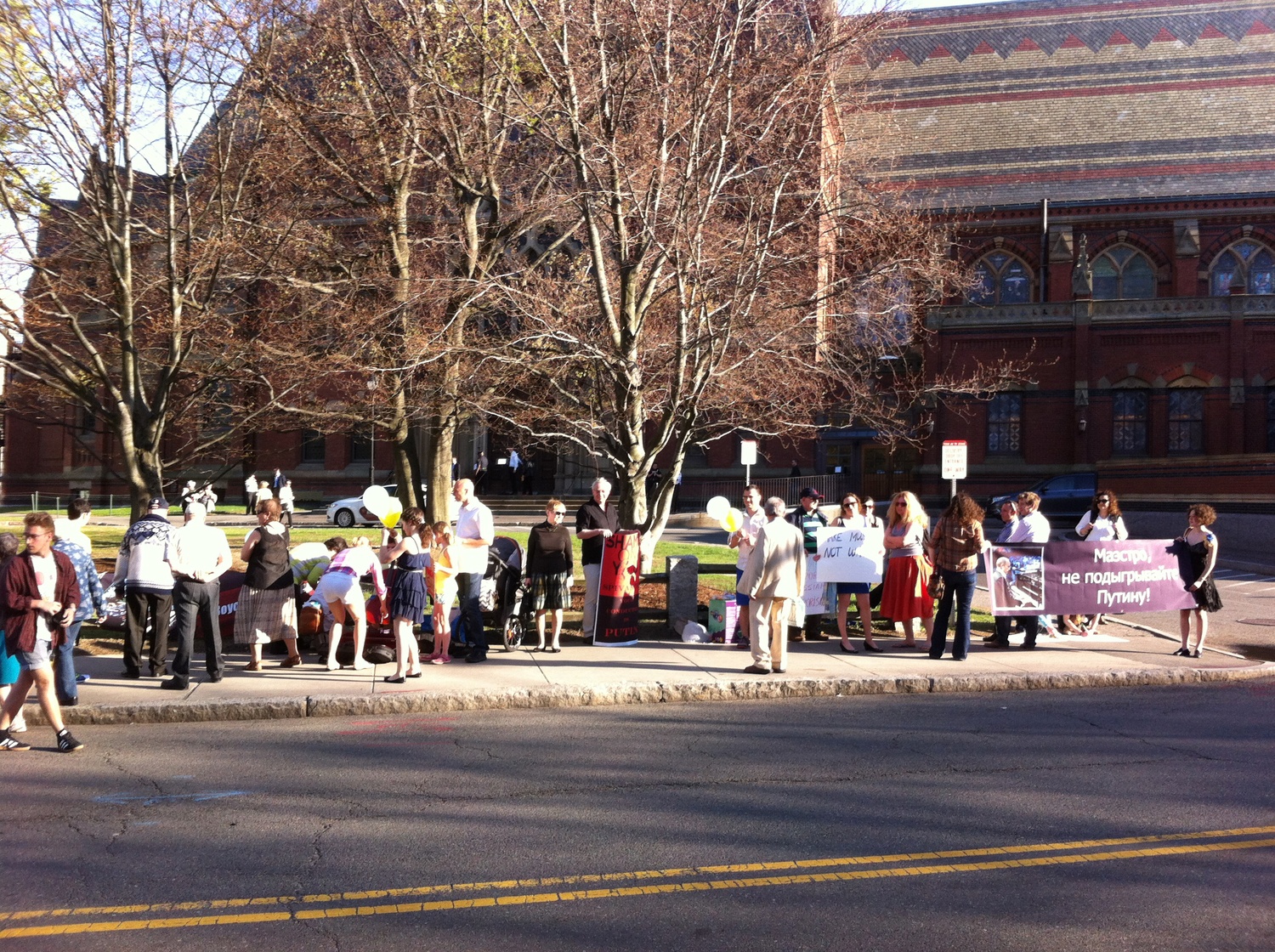 Protesters of violinist Vladimir T. Spivakov stand outside Memorial Hall on Sunday evening, where the Russian violinist was performing. By Dev A. Patel

Spivakov was among several hundred cultural figures who signed a letter expressing their support for the Russian government’s intervention in Ukraine and Crimea.

“In the days when the fate of Crimea and our countrymen is being decided, Russia's cultural figures cannot remain indifferent, cold-hearted observers,” reads a translation of the letter, which was published on March 11 by the Russian Culture Ministry. “We want the commonality of our peoples and our cultures to have a strong future. This is why we firmly declare our support of the position of the President of the Russian Federation in regards to Ukraine and Crimea.”

The letter prompted a harsh reaction from those who do not support the annexation of the Crimean peninsula, including those at Sunday’s protest.

“When we realized that he did this and he would be in our town acting like nothing happened, we thought that wasn’t right,” said Maria M. Tyutyunik, a Boston area resident. “We wanted to make sure that he regrets this at least somehow and that people are aware that this is not just a famous musician but someone who supports Putin.”

Spivakov visited Harvard as the conductor and violin soloist in the Moscow Virtuosi Chamber Orchestra, which performed in Sanders as one stop in a larger tour honoring the Orchestra’s 35th anniversary.

Several of the protesters reached out to the organizers of the concert, Maestro Artist Management Company, asking them to cancel the event.

“They refused on the ground that this is an organization that has to do with arts and not politics,” Gamarnik said.

The protest movement, which will span across the United States and Canada during Spivakov’s tour, has also garnered over 2,000 signatures to cancel the concerts, according to Dmitry Smelansky, a software engineer from Brighton and one of the protest’s organizers.

Multiple Harvard University Police Department officers stood at the entrances to Memorial Hall, directing protesters off of Harvard’s property to the nearby sidewalks.

The letter which Spivakov signed was published just days before Crimean citizens—a majority of whom speak Russian—voted in favor of unification with the Russian Federation. The validity of the vote has been widely quesioned, but when these results were officially announced, Putin approved the admission of Crimea into Russia.

The annexation came amid growing tensions in Ukraine, whose pro-Moscow president Viktor Yanukovych was driven from power by violent protests in the country earlier this year, prompting Kremlin-backed military forces to seize control of the Crimean peninsula.