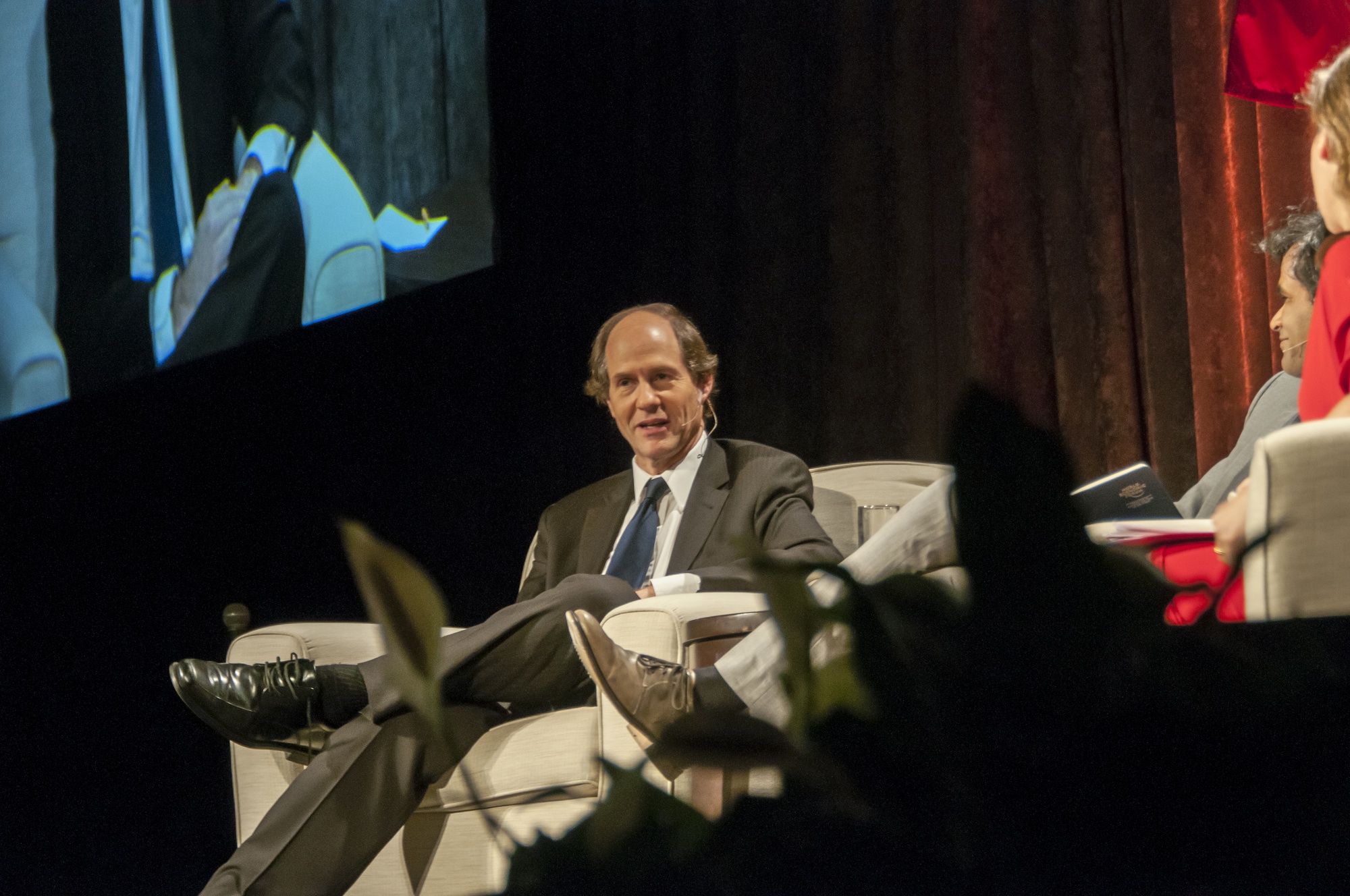 NEW YORK—Stories above a tranquil Hudson River, about 600 supporters of the University gathered here Wednesday night on the decommissioned aircraft carrier Intrepid to celebrate the progress made so far in the University’s ongoing capital campaign and to hear a rallying cry for future support from University President Drew G. Faust.

The gathering, called “Your Harvard: New York City,” attracted a spectrum of tri-state area Harvard affiliates, including some of the University’s most influential donors and alumni, as well as a small cohort of protesters.

The event came on the heels of Faust’s announcement in March that the Harvard Campaign, the University’s first fundraising drive since 1999, had already raised $3.7 billion of its $6.5 billion goal. Addressing the crowd assembled below the flight deck of the historic carrier, Faust did not update that number but did say that $430 million had been raised so far for financial aid.

“By making Harvard more open and accessible, we are better able to draw a new generation of leaders from the widest possible pool,” Faust said. “Sustaining this commitment will depend on support raised through this campaign, and I am happy to report that we have raised $430 million so far, thanks in considerable part to Ken Griffin’s transformative gift earlier this year. This is a great start.”

Faust crafted her address around the story of Charles Devens ’32, a serviceman on the Intrepid who earned a Bronze Star for his leadership during an attack on the carrier in 1944.

“Like so many Harvard men and women before and after him, he led,” she said of Devens.

As she spoke broadly of leadership, Faust ticked off the top priorities of the capital campaign, including the renewal of the undergraduate Houses, investments in teaching, learning, and research, and the relocation of the School of Engineering and Applied Sciences to Allston.

“By the time we close this campaign, hundreds of thousands of square feet of new campus space will be taking shape across the Charles,” Faust said. “And we can imagine Harvard, by its 400th anniversary, less as a constellation of separate precincts and more as a unified campus with a river running through it.”

The event was an intricate production orchestrated by the Harvard Alumni Association, whose president, Catherine A. Gellert ’93, convened the program, and whose outgoing executive director, John “Jack” P. Reardon ’60, sat near Faust and Provost Alan M. Garber ’76 in the front row. Six members of the Radcliffe Pitches, an all female a capella group, serenaded alumni and guests as they made their way to rows of neatly arranged seats, each bearing a sleek white package of cheese, grapes, and other snacks

“I think it’s amazing, because to get all the alumni together, [to get] 700 people in New York is just another huge celebration of our community and how fun it is,” said Mitchell L. Dong ’75, who attended with his two daughters.

Paul J. Finnegan ’75, a co-chair of the campaign and a member of the Harvard Corporation, said the turnout was an indicator of the progress the campaign has made so far.

“It’s an extraordinary turnout in the middle of the week. I think it’s reflective of the excitement about the campaign and what’s going on at the University,” he said. “There is terrific momentum, and I think this is one example of it.” 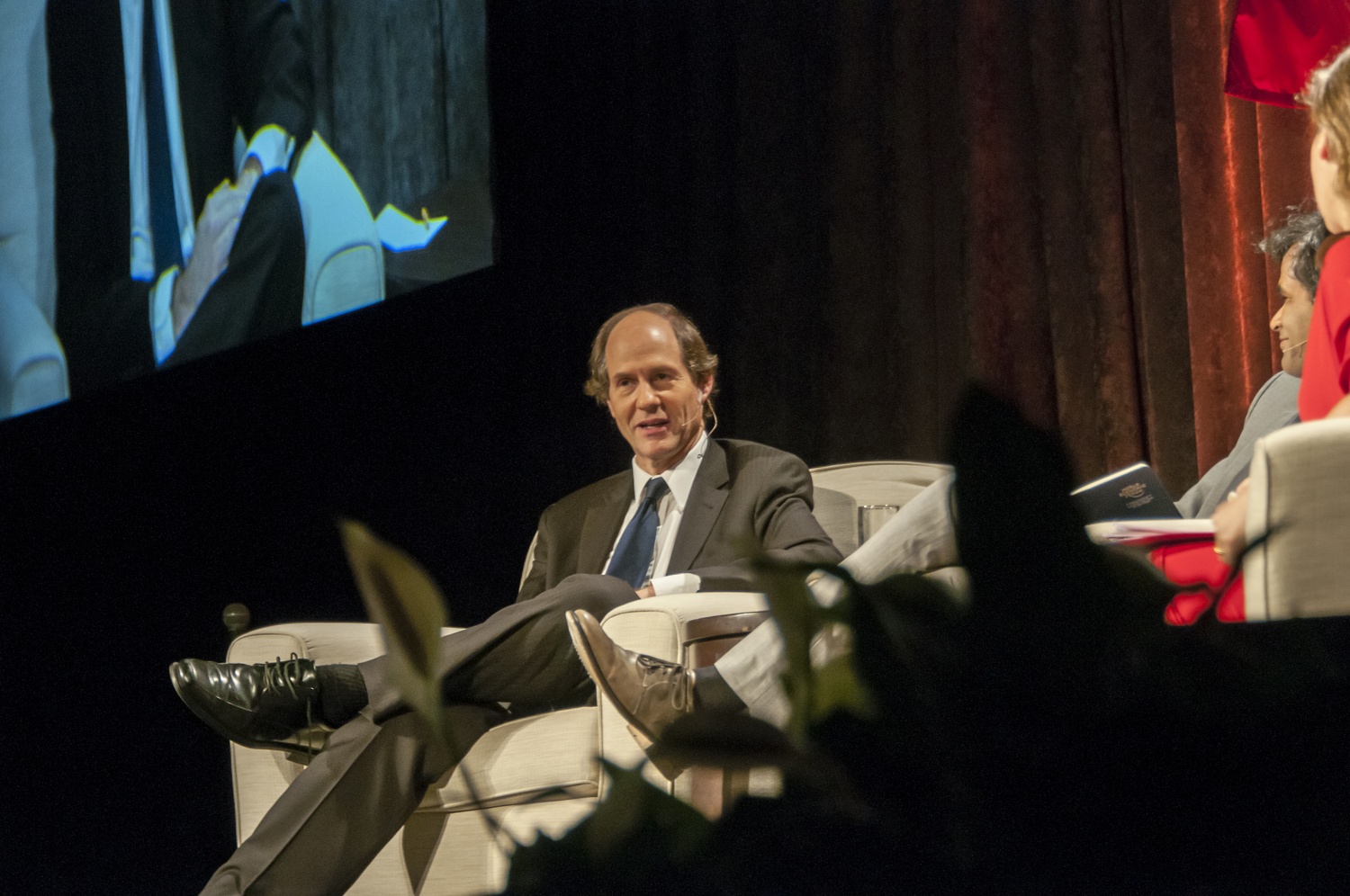 Cass R. Sunstein ‘75 moderates a panel at the Your Harvard: New York event organized by the Harvard Alumni Association on the USS Intrepid in New York City Wednesday. By Matthew Q. Clarida

Before Faust’s remarks, Canadian author and public servant Chrystia A. Freeland ’90 led Harvard Law School professor Cass R. Sunstein ’75 and Economics professor Sendhil Mullainathan in a panel on public policy and decision making. During the panel, Sunstein, a former official in the administration of President Barack Obama, spoke about his popular idea of liberal paternalism and nudging. Mullainathan discussed intellectual “bandwidth” and how professional and financial concerns can have an effect on intelligence. He drew a chorus of laughter from the crowd and the panel when he explained how, by the same theory, people can lose IQ points when they diet.

After the program, guests mingled in the hangars of the carrier and some descended on local bars for planned and unplanned alumni functions.

The event was the third “Your Harvard” gathering since the start of the campaign, and the first on the east coast. The first two drew hundreds of attendees each in London and Los Angeles. The next is scheduled for October 24-25 in Dallas, Texas.

As attendees approached the carrier before the event, a group of about a dozen protesters objecting to the treatment of workers at the Boston-Cambridge DoubleTree Suites by Hilton Hotel, which is housed in a University-owned building on Soldiers Field Rd., distributed fliers. Employees there have been agitating for fair process unionization.

“This event is a centerpiece of that campaign...administrators, President Faust, and important alumni donors will be here,” said protester Gabriel H. Bayard ’15. “We hope to inform them that Doubletree workers are part of the community and deserve the respect that they are asking for.”