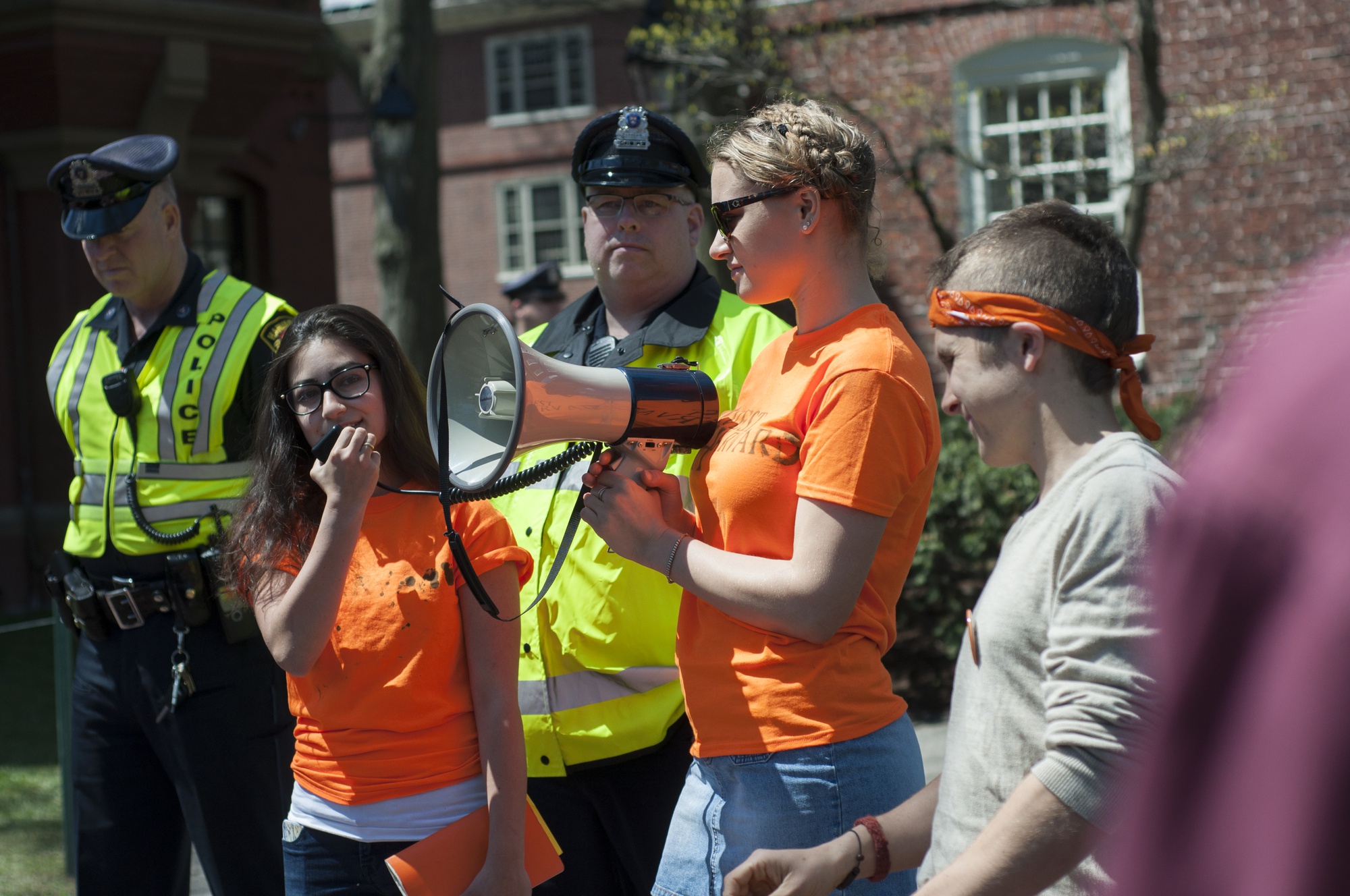 Members of Divest Harvard, including Brett A. Roche '15, far right, who was arrested during a protest Wednesday morning, returned to Massachusetts Hall Friday afternoon to renew their call for an open meeting with the Harvard Corporation.
By Matthew Q. Clarida, Crimson Staff Writer 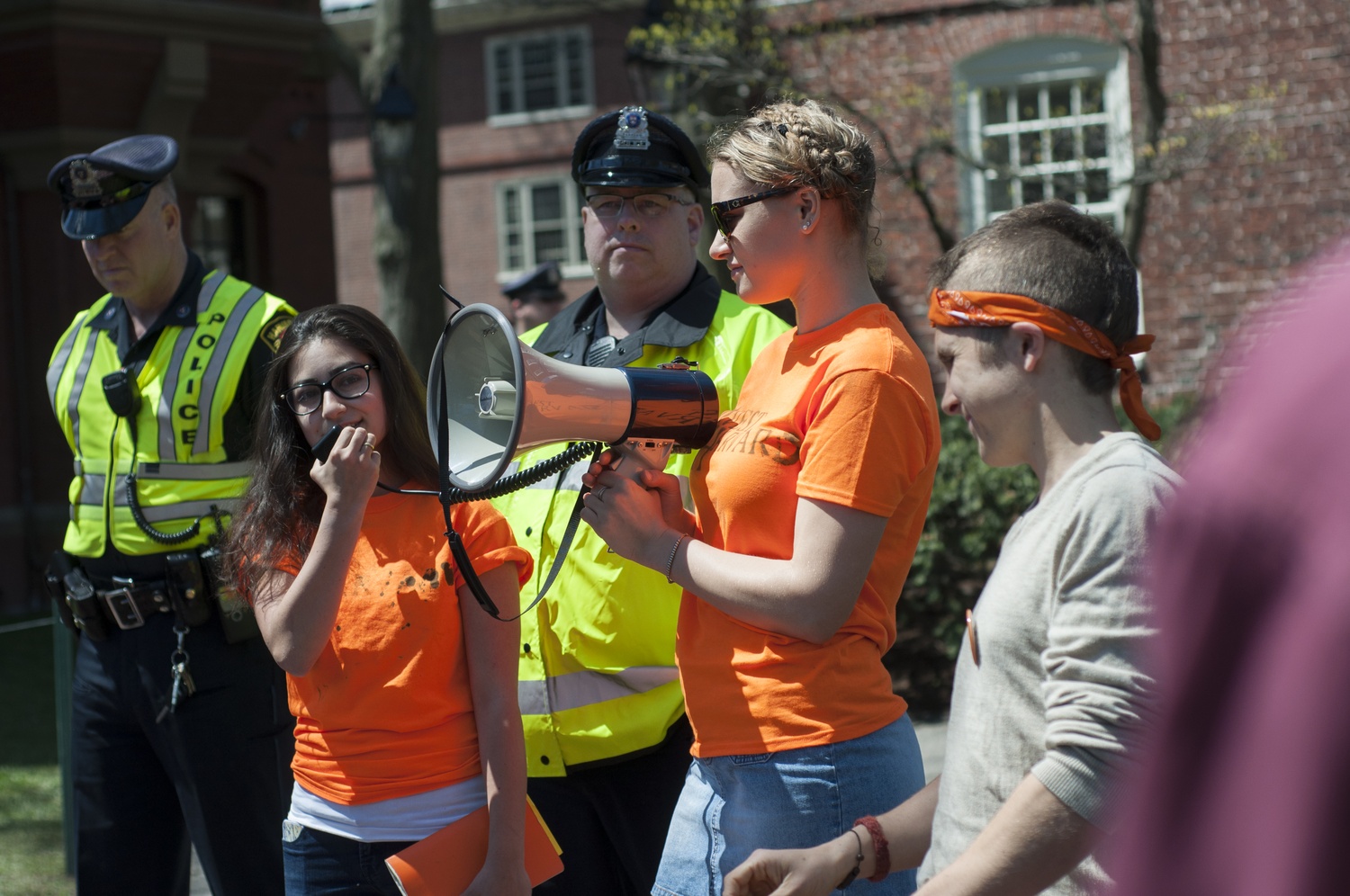 Members of Divest Harvard, including Brett A. Roche '15, far right, who was arrested during a protest Wednesday morning, returned to Massachusetts Hall Friday afternoon to renew their call for an open meeting with the Harvard Corporation. By Robert F Worley

The day after one of its undergraduate members was arrested during a protest in front of Massachusetts Hall, the environmental activist group Divest Harvard held another rally in front of the home of the University’s central administration and continued to demand an open meeting with its top leadership.

Since its founding in 2012, Divest Harvard has urged the University to unload its holdings in fossil fuel companies and demanded an open audience with University President Drew G. Faust and the Harvard Corporation, the University’s highest governing body. Though Faust and members of the Corporation have met with members of Divest Harvard, the organization has criticized the meetings for taking place behind closed doors and for not leading to discernible progress.

At Friday’s rally, which was attended by a crowd which swelled to nearly 75, members of Divest Harvard continued to clamor for an open meeting with University leadership, but much of the event focused on the University’s response to protesters the previous day.

Among the first to speak was Brett A. Roche ’15, the student who was arrested by Harvard University Police Thursday morning and quickly released after all charges against him were dropped. As Roche recounted the story of his arrest, murmurs in the crowd ceased and gave way to a loud applause. Roche said that the adversity has been formative for the group.

“This has been an experience of incredible growth for many members of Divest,” Roche said. Afterwards, he added that he thought that his arrest, and the group’s organized protests this week, would together “draw a lot of attention to the administration on this issue.”

After Roche, a host of students, faculty members, and others—some not affiliated with Harvard—took the microphone. Frederick E. Small, a graduate of Harvard Divinity School and a Unitarian minister based in Cambridge, said that in his mind the Divest movement is about justice.

Tim M. DeChristopher, a student at the Divinity School who has been involved with environmental responsibility protests across the country, attacked University leadership for its treatment of protestors the day before, and for not agreeing to an open meeting with the community on the issue of divestment.

DeChristopher went on to accuse Faust and other top administrators of “[using] the police to do their dirty work because they weren’t willing to come out here and engage in a dialogue.”

The event concluded with representatives from Divest Harvard, along with Classics professor Richard F. Thomas, delivering a ceremonial box of petitions demanding an open meeting to the front door of Mass. Hall. The box—the real petitions are electronic and will be emailed to Faust—was accepted by Faust’s senior special assistant Lars P.K. Madsen, who said that he would deliver it to the president. Roche’s arrest on Thursday morning came after Madsen was unable to enter Mass. Hall due to the blockade.

Chloe S. Maxmin ’15, who sits on the board of Divest Harvard, said after the event that she feels the group is gaining momentum.

An earlier version of this article incorrectly stated the day on which the University issued the statement regarding the Divest Harvard protest and the arrest. In fact, the statement was issued on Thursday.