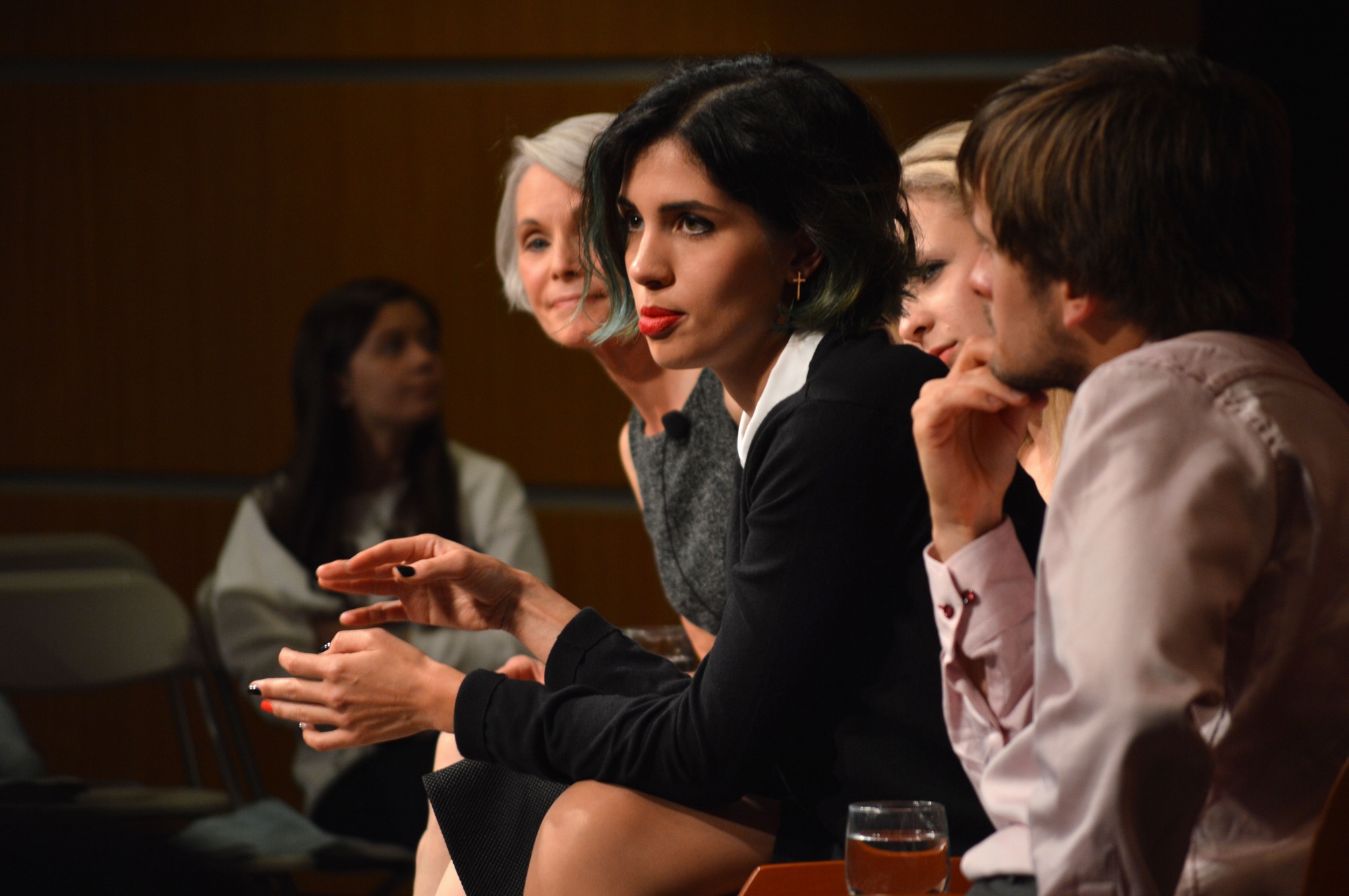 Nadya Tolokonnikova of the Pussy Riot speaks at the Institute of Politics on Monday evening. The discussion, moderated by Jill Dougherty, revolved around the implications of art and expression in Russian politics.
By Zara Zhang, Crimson Staff Writer

Two founding members of the Russian punk rock protest group Pussy Riot spoke out strongly against Russian President Vladimir Putin Monday night at a forum at the Institute of Politics, raising awareness of what they consider to be oppression propagated by Putin in their country.

Masha Alekhina and Nadya Tolokonnikova, who have become the public face of the group, told a packed John F. Kennedy Jr. forum about their experience of political imprisonment, reflected on Russia’s recent incursions in Ukraine, and advocated for the right to free speech.

“We think no one should be banned from something because of nonviolent expression of their opinions,” Tolokonnikova said.

Tolokonnikova and Alekhina attracted international attention when they were arrested on charges of hooliganism in August 2012 after attempting to perform the protest song “Mother of God, Drive Putin Away” at Moscow’s Cathedral of Christ the Savior. Their arrest and sentence—other members of the group avoided jail time—were met with significant criticism in the West. The two were granted amnesty and released in Dec. 2013. 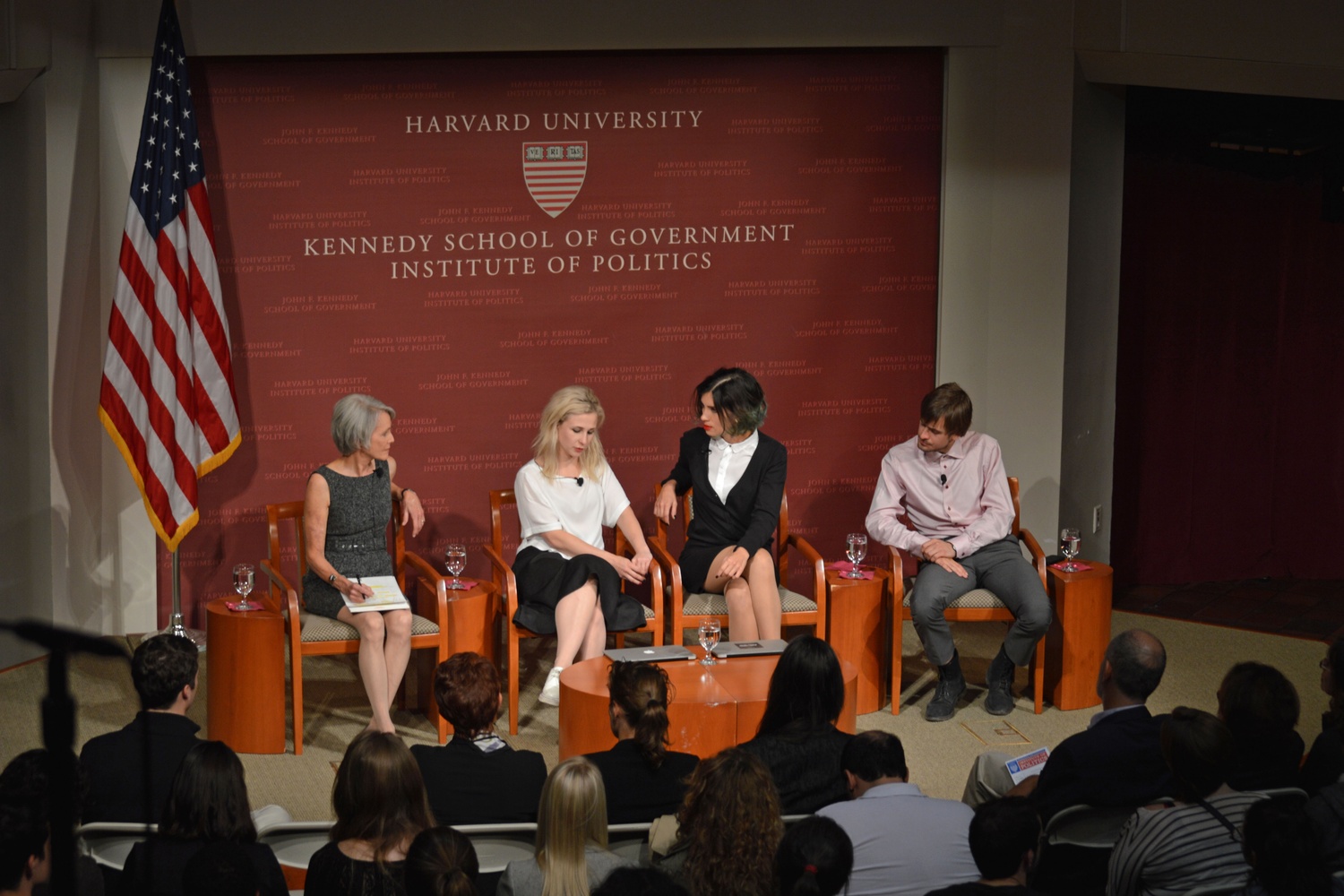 From the left, Jill Dougherty, Masha Alekhina, Nadya Tolokonnikova, and Pyotr Verzilov discuss the implications of Pussy Riot in Russian politics at the IOP in September. By Y. Kit Wu

Later in the evening, the activists appeared outside the Cambridge Police Department, where, according to their Twitter account, they had gone to investigate the arrest of a Harvard alumnus who had violated a ban on entering University property to attend the forum. The man, who had been banned from Harvard property after a previous protest, was released shortly thereafter.

Since their release the two artists have travelled internationally to advocate several causes, including feminism, rights for the LGBTQ community in Russia, and political freedom. Monday’s event, dubbed “A Conversation with the Feminist Protest Art Collective Pussy Riot,” was relatively rare for the IOP, which usually hosts politicians, political operatives, and journalists rather than artists like the members of Pussy Riot.

When asked about the pair’s major objections to Putin, Tolokonnikova noted that the president’s actions have resulted in a severe "brain drain” in Russia.

"The problem with Putin is that he brings the level of political discussion to the Stone Age,” Tolokonnikov said. “People are leaving because his international actions are dictated by paranoia."

While in prison, the two women participated in hunger strikes to protest the harsh conditions they faced. Upon their release, they founded a prisoners’ rights NGO called Zona Prava (Zone of Rights).

"You should just see prisoners and their problems as human problems, problems that all of us have," Alekhina said.

The activists added that they encountered support, and even autograph-seekers, among the prison staff during their sentence.

Despite their critiques of the state, they asserted that they do not intend to leave Russia.

"No. It's our language, our culture, not the culture of Putin,” Tolokonnikova said, suggesting that Russia remains the state of its people. 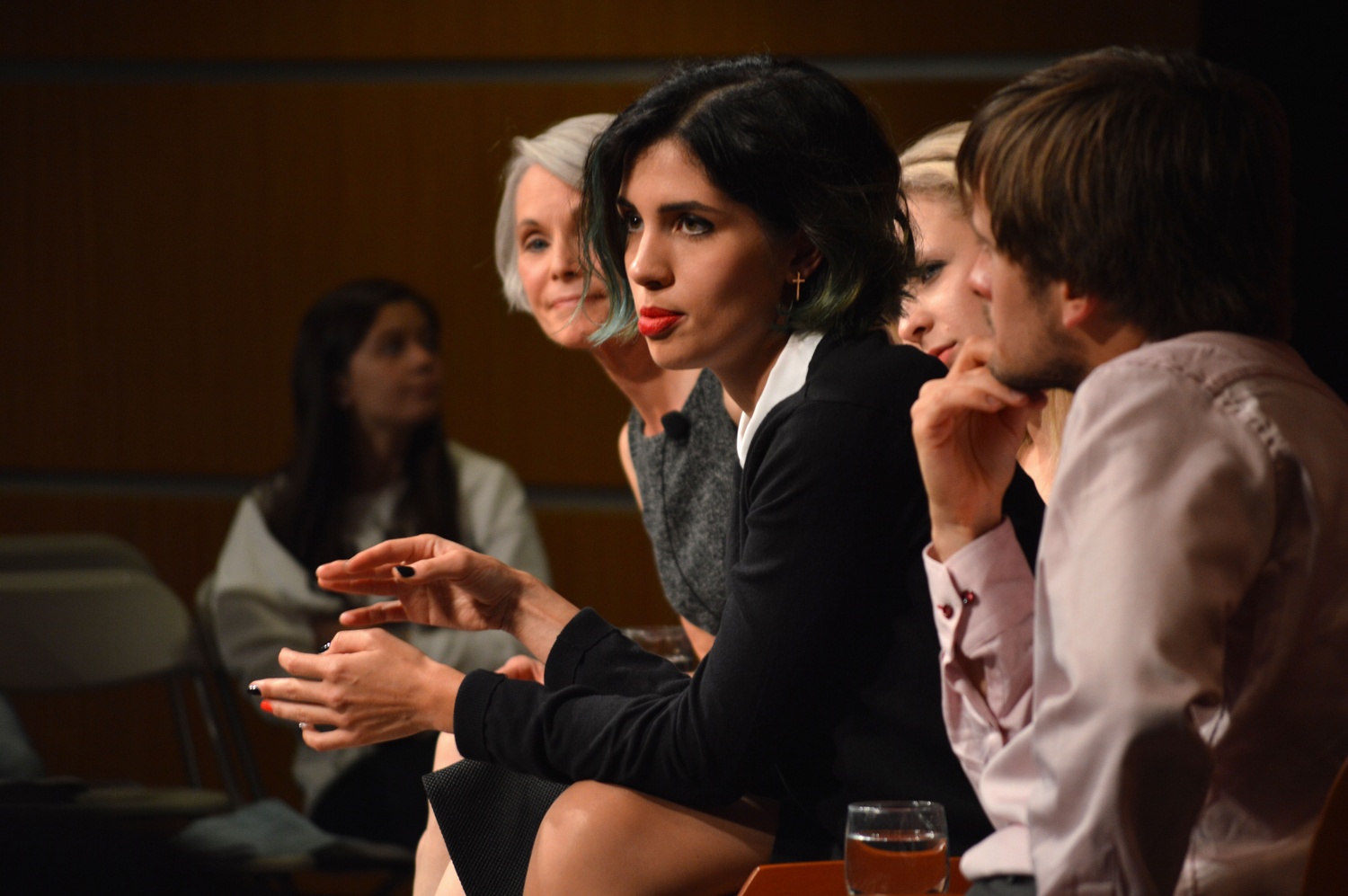 Nadya Tolokonnikova of the Pussy Riot speaks at the Institute of Politics on Monday evening. The discussion, moderated by Jill Dougherty, revolved around the implications of art and expression in Russian politics. By Y. Kit Wu

The lotteried event was moderated by former Shorenstein fellow and CNN Moscow Bureau Chief Jill Dougherty, while Tolokonnikova’s husband interpreted for the artists.

When a member of the audience attempted to ask a question after identifying himself as a reporter with The Huffington Post, Dougherty interrupted him, explaining that journalists are not allowed to asked questions at John F. Kennedy Jr. Forums. Half-jokingly, the reporter asked: “Is this Russia?”

The forum was also itself a venue for an act of protest, as Roman J. Torgovitsky, a Russia-born alumnus of the Graduate School of Arts and Sciences and the School of Public Health, violated a ban on entering Harvard property.

Torgovitsky was arrested for disorderly conduct in Sanders Theatre last May when he stepped onto the stage to confront violinist Vladimir T. Spivakov, a supporter of Putin’s policies in Ukraine.

On Monday, his presence and that of allied protesters outside the venue was intended to draw attention to the alleged injustice of the ban. Torgovitsky and supporters argued that the Harvard University Police Department misrepresented what occurred during the Sanders incident and that University administrators have subsequently ignored the issue.

After he stood to speak during the forum, HUPD quickly arrested Torgovitsky for trespassing. He was briefly held at Cambridge Police headquarters. Tolokonnikova and Alekhina arrived at CPD headquarters before Torgovitsky was released and tweeted several messages about his cause.

University spokesperson Jeff Neal wrote in a statement on Monday that the University has alerted the Distaric Attorney's Office that it "does not plan to pursue the further prosecution of criminal charges."

"Our only interest is preventing the disruption of events at Harvard," Neal wrote.

Still, despite the presence of the protesters, the event went on undisrupted.

Many audience members responded positively to Tolokonnikova and Alekhina. Parth C. Thakker ’18, who was in attendance, said the event was “engaging.”

“You don’t usually have two members of a punk rock band on this stage which usually hosts dignitaries…. To have these two young people who do cool things was an offbeat experience itself,” Thakker said.

—Staff Writer Zara Zhang can be contacted at zara.zhang@thecrimson.com.