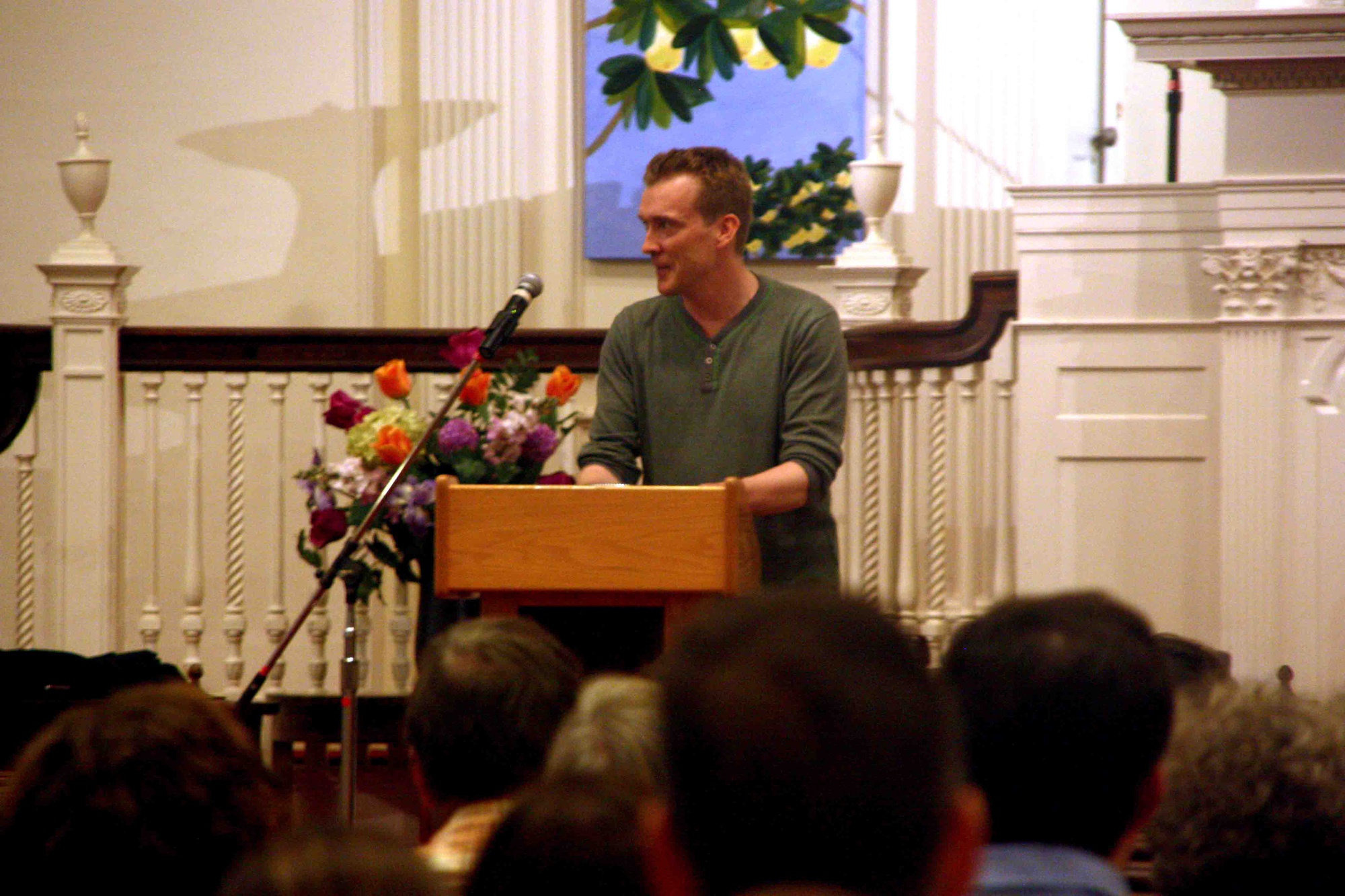 On Sept. 18th, David Mitchell, acclaimed author of such works as “Cloud Atlas” and “The Thousand Autumns of Jacob de Zoet,” visited Cambridge to talk about his new book, “The Bone Clocks.” After more than an hour of book-signing and joking with fans, Fifteen Minutes sat down to a late-night dinner with the English author. .
By Mayer M. Chalom

On Sept. 18th, David Mitchell, acclaimed author of such works as “Cloud Atlas” and “The Thousand Autumns of Jacob de Zoet,” visited Cambridge to talk about his new book, “The Bone Clocks.” After more than an hour of book-signing and joking with fans, Fifteen Minutes sat down to a late-night dinner with the English author.

FM: Your novels are each so different—you’ve written about everything from Neo-Seoul to Dejima to gang wars and disembodied spirits. Everything seems believable, though—how do you make each novel feel so real?

DM: Well, I make them believable by not messing them up. I make them internally consistent, so that the reader never says, “Hang on! You said it works like this here, but over here you said it works like that!” With futuristic made-up worlds, I write the constitution of the place, the laws about how it works. The actual laws, maybe, but also, the unspoken ones.  Who’s got the power? What do people in that world take for granted? You get it fixed in your head how the place works, and then you use what is in all readers—the default mode is that we will believe. The narrative will convince us, just as long as you don’t mess it up.

FM: I’d like to ask about a recent, not-too-favorable review in the New Yorker that said your book was beautiful but lacking in substance. How do you respond to that?

DM: I basically don’t think about it anymore. I’d prefer the review to be good—I’d like all of them to be good—but that isn’t gonna happen. I don’t write books for reviewers, and I think today you cannot write a book with one eye on future reviews. You’d just be left with this anodyne, safe thing in the late Henry James tradition, and that’s too confining for me.

FM: Can you explain what you mean by “safe” writing?

DM: It means writing about a world that you know and don’t need to research, not finding out about the lives of people radically different to yours. It means not messing with structure—just a past tense, third person narrative—it goes through, no tricks, no jumping around. It means not using genre at all.

It means, for me, writing a novel about a middle class, North London couple who are having marital difficulties. One of them has an affair, goes off, and there are unforeseen consequences that are a little bit foreseen, really. They divorce, go their different ways, decide they can’t live without each other, forgive each other, and—on the cusp of reconciliation—one gets tragically killed. That would be, for me, a very safe novel. I could write it in my sleep. It would be okay, but really, why bother? That’s what I mean by a safe novel.

FM: In your books, there are ideas that appear again and again—everything is connected, the strong eat the weak, something about never knowing whom to trust. Do you put those ideas in because you believe them? Because you disagree with them? Do they just manage to sneak in anyhow?

DM: They all sneak their way in, because they are my archetypal themes. Another one you didn’t mention is impaired communication. All writers have a number of archetypal themes. It’s not so much about what they put in their books—it’s about what the writer’s made of. Even if you tried to keep them out, they’ll sneak in. As it happens, they’re fairly beefy themes, so I’m happy to usher them in.

FM: What about the repeating characters—is that something you’ve planned from the beginning? Do you always know when you’ll use your next character?

DM: Mostly it’s book-by-book proposal. I think of the book first, and then, quite early, I think if there’s anyone who I can reemploy. I reacquaint myself with them and their histories, and if they fit—if there’s not too many of them—then yes, I will redeploy them.

FM: Where do you take your inspiration from?

DM: Inspiration’s a bit of a myth. I think it’s a highfalutin way of saying, “Keep your eyes open, your ears open. Don’t interrupt, and help yourself to ideas that the world is made of.” What is called inspiration is just everywhere–everything, potentially, is a story. The idea that inspiration is an ideas fairy who can only be hunted out in rare, arcane places by those special people–I don’t buy that.

FM: So for someone who can potentially write about anything, how do you narrow down your list?

DM: Human frailty. I can only write so many books. I’ve already got five ideas lined up, and I don’t let any new ones in, really. I’ll still write ideas down, because they might be ideas for scenes.  Those are still very welcome, and observations are still very welcome. The name Mayer, which I haven’t really met before, will go into my name bank page, because it’s a cool name. I can’t think it up; I can only find it. There was another great one tonight—Marena.

FM: Can you give us any hints into plans for future books?

DM: I’m doing a short book—my first ever short book—that will give a home to some stories that I wrote for an early version of “The Bone Clocks.” After that, I’ll be thinking about the late sixties and the musical creativity in SoHo, London, and Greenwich Village. It will be about popular culture at the time, and art and youth and music and politics.... I’ll be honing in and peopling a world that was real, but is now gone. I might have 119A, though, the Horologists’ safe house, as the scene of a party or something. I’ll see.

FM: You’ve said that one of the hardest things is getting rid of a piece of beautiful writing that really doesn’t fit in your books. Are there any examples you can tell us about?

DM: There are loads, and if I had my laptop here, I would show you. To make it easier, to excise them, you don’t put them in a trashcan. You open a file called “The Useful Bin” and put everything in there. It makes it much easier, because you’re not losing it, and if you want to get it back, it will always be there.

But you know what? You never, never go in there ever again. You forget it even exists. I don’t even know what it was that I agonized over for so long, because it’s just gone now. I’m not trying to be deliberately secretive—it’s part of the process. You forget, because it wasn’t needed. The moment they’ve gone, amnesia settles in.

FM: Watching you at the event tonight, you seemed so energetic; it was really astounding. I have to ask, where do you get all this energy from?

DM: Well, from you—from the audience. I’m not like that normally, but when I have an attentive audience, then I feel as if I’m participating in a think tank—swimming in a think tank. There’s intelligence and thought and wit and responsiveness, and these things set up a kind of feedback loop with me—perhaps I become more intelligent and more attentive and wittier than I’d otherwise be.

FM: And when you go back to write, does that energy stay with you then?

DM: That’s a different kind of energy. It’s not performance energy—it’s work energy, I suppose. Energy for writing comes from what you’re writing. In a way the work in progress becomes the audience. You get energy from a well-crafted sentence, a neat idea, or a snappy exchange of dialogue. You get energy from right decisions as you create a scene and place those scenes end to end. Sometimes you read other things, or watch the way that six plots are simultaneously spun in Game of Thrones, and think “Wow, that’s really clever.” The way the protagonist in Breaking Bad, Walter, is often a really objectionable person. He’s half hero, half anti-hero—that’s clever! Or, I come across a new word, like “dilatory.” That wasn’t in my active vocabulary, but it is now. Dilatoriness—the noun’s even nicer in a way. It’s clumsier, but nicer. So yeah, this is where energy comes from. That and food, so don’t eat gloop in your canteen, and remember to get your vegetables.