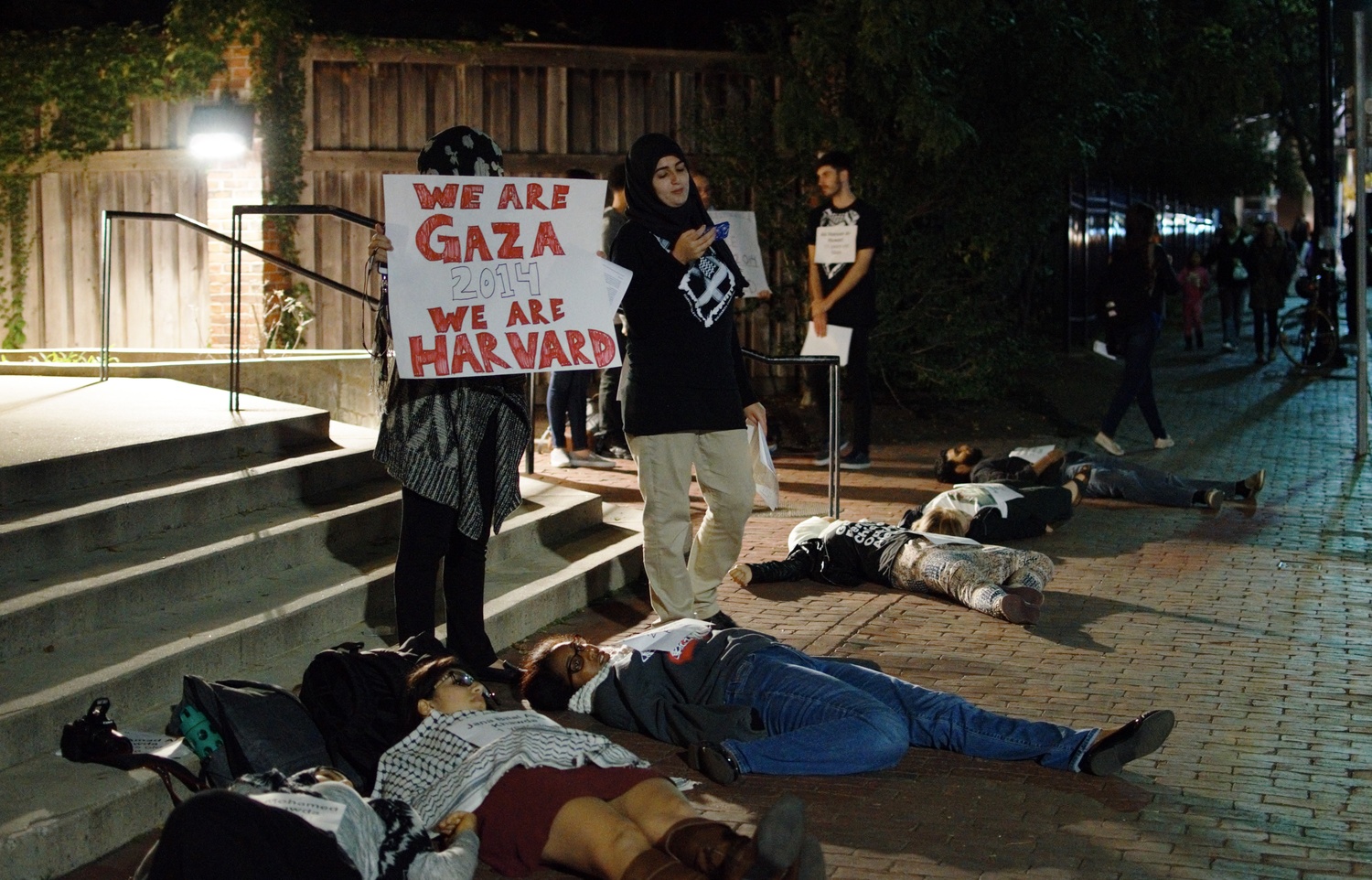 A group of about 15 students staged a “die-in” in front of Harvard Hillel on Thursday night, protesting an event inside the building that featured Gedalia Gillis, an officer in the Israeli military.

The protest, organized by members of the Palestine Solidarity Committee, involved students lying down near the entrance to Hillel. Students could still enter and exit the building, and a Harvard University Police officer was present. Multiple attendees said Gillis spoke about his military experience, focusing particularly on his time of service in the summer of 2014, a time of heightened conflict and violence between Israel and Palestine in the Gaza Strip.

Many student protesters wore signs around their necks with the names of Palestinians who died during the 2014 conflict. Some students read a list of the names aloud and handed informational flyers to passersby.

“We feel that this event is very estranging and creates a hostile environment for these students on campus,” said Fatima M. Bishtawi ’17, a co-president of the Palestine Solidarity Committee.

Members of the Palestine Solidarity Committee said they were “really narrowly” protesting the evening’s speaking event at Hillel, according Andrew W. Schutts ’16, a member of the PSC.

For students who organized the speaking event at Hillel, the protest was surprising and frustrating. Yoav Shaked ’17, the president of Harvard Students for Israel, the speaking event’s organizer, said he wishes the student protesters had attended the event and aired their concerns there rather than protest outside.

Aaron Y. Grand ’18 said he fears that the students lying outside might have interfered with students entering the building. Both Grand and Shaked said the speaking event was meant to “humanize” the Israeli military and to present a perspective they said is not normally heard.

Jonah C. Steinberg, the executive director of Hillel, also said he was troubled by students lying in front of the building.

“I respect a student’s right to their individual opinions and to expressing them. I’m sad because this is the first time in my five years at Harvard that I have seen an effort to interfere with the event of another organization,” Steinberg said.

According to Schutts and Bishtawi, protesters notified Dean of Student Life Stephen Lassonde and HUPD ahead of time. Lassonde briefly attended the protest, according to Schutts. S. Allen Counter, the director of the Harvard Foundation for Intercultural and Race Relations, also stopped by to see it.

“This is a genuine and honest example of student expression about tragedies in this world,” Counter said.