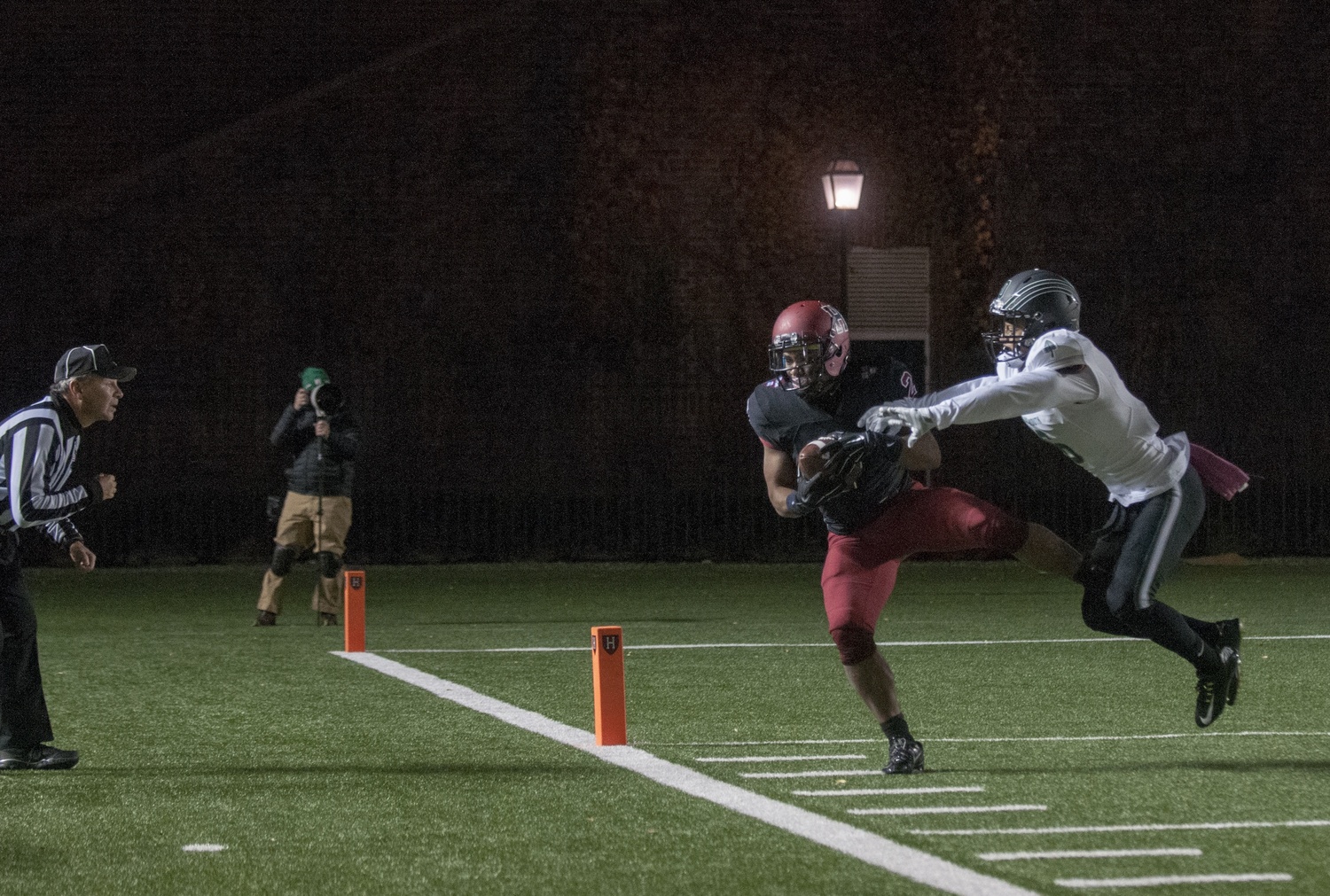 Senior wide receiver Seitu Smith's 39-yard touchdown grab on 4th-and-12 with 6:38 remaining in the fourth quarter brought the Crimson within six points in its 14-13 win over Dartmouth. By Mark Kelsey
By Samantha Lin, Crimson Staff Writer

Sometimes the chips don’t fall your way. And sometimes, when you need them to the most, they do.

On Friday night, it took 59 minutes and 22 seconds for the chips to fall for the Harvard football team in its 14-13 victory over Dartmouth.

For the majority of four quarters, the Crimson found itself in the unfamiliar position of playing from behind. With 3:43 remaining in regulation, it seemed that a 20-game win streak—and a shot at the Ivy League title—was on the verge of snapping.

Clinging to a six-point lead at Harvard Stadium, the Big Green offense took over with a short field after Crimson coach Tim Murphy elected to punt following a three-and-out. But on an option play from Dartmouth quarterback Dalyn Williams to running back Ryder Stone, senior linebacker Jake Lindsey hit the ball-carrier in the backfield. The pigskin popped loose, and Harvard captain Matt Koran fell on top of it.

Suddenly, the Crimson had possession, two timeouts, and nearly three minutes to move down half a football field.

“I was just praying my heart out,” Koran said. “I was about to have a heart attack over there. But I had faith in the offense. I knew that they could get it done. It was just a matter of when and who.”

Without perhaps his most explosive receiver in senior Andrew Fischer, who suffered a pulled hamstring earlier in the quarter, senior quarterback Scott Hosch relied on his remaining bevy of offensive talent to move steadily down the field.

On the 11th play of the drive, Hosch fired a five-yard bullet with just 38 seconds remaining to the youngest player on the offense, rookie receiver Justice Shelton-Mosley. For the first time, Harvard held the lead.

The remaining 38 seconds proved to be enough for the Big Green to march down the field and set up a 46-yard field goal attempt with a second remaining, but the momentum was full-swing Harvard. Sophomore defensive lineman Stone Hart got his left hand on kicker Alex Gakenheimer’s attempt, and the win streak remained alive. 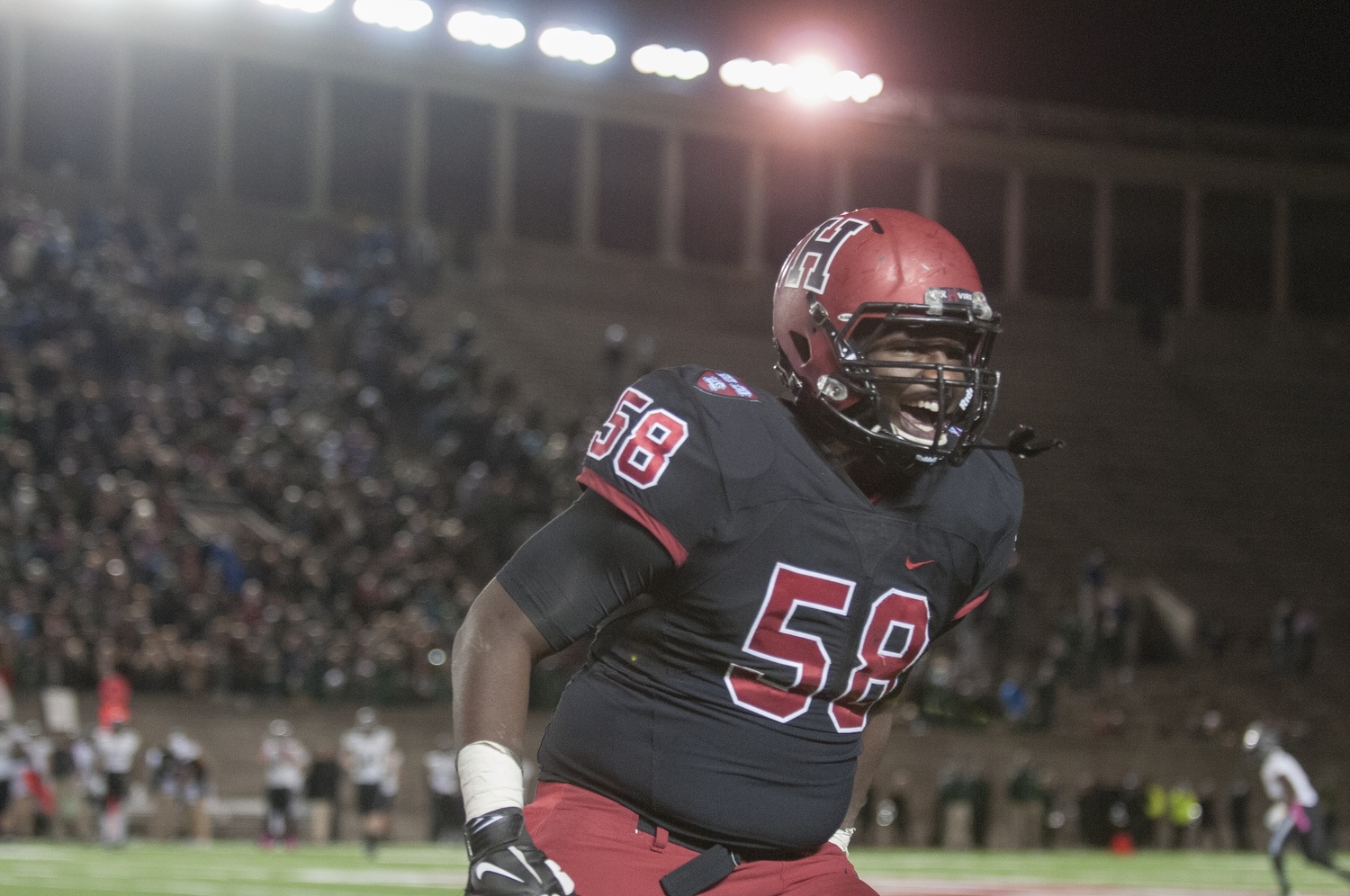 The Friday night showdown included four turnovers and two blocked field goals, as Harvard (7-0, 4-0 Ivy) completed a comeback from a 13-point fourth-quarter deficit to eke out a one-point victory over Dartmouth (6-1, 3-1). With the win, Harvard takes sole possession of first place in the Ancient Eight and remains in control of its destiny as it pursues its third consecutive conference title.

“We stole one today,” Murphy said. “They probably outplayed us for most of the game…. We never give up, as cliché as that it is, and that’s about the only explanation that I have for that W.”

The Crimson made five trips to the red zone during the game, but the Dartmouth defense managed to hold the most prolific Ivy League offense scoreless until late in the fourth quarter. Friday night marked the first time since 2010 that Harvard did not score through three quarters.

Trailing by 13 with less than seven minutes to go, Harvard faced a fourth-and-12, do-or-die situation at the Dartmouth 39-yard line. Hosch scrambled out of the pocket and lobbed the ball at senior wideout Seitu Smith, who twisted around and hauled in the long pass before falling on the end zone pylon to finally put the home team on the scoreboard. Hosch finished with 276 yards passing and two touchdowns.

For two offenses that have averaged roughly 40 points a contest, the game was markedly low scoring, a product of tough defensive play on both sides and a number of missed opportunities. Early in the fourth quarter, Harvard found itself inside the one-yard line, closer to the end zone than anytime in the prior three periods. 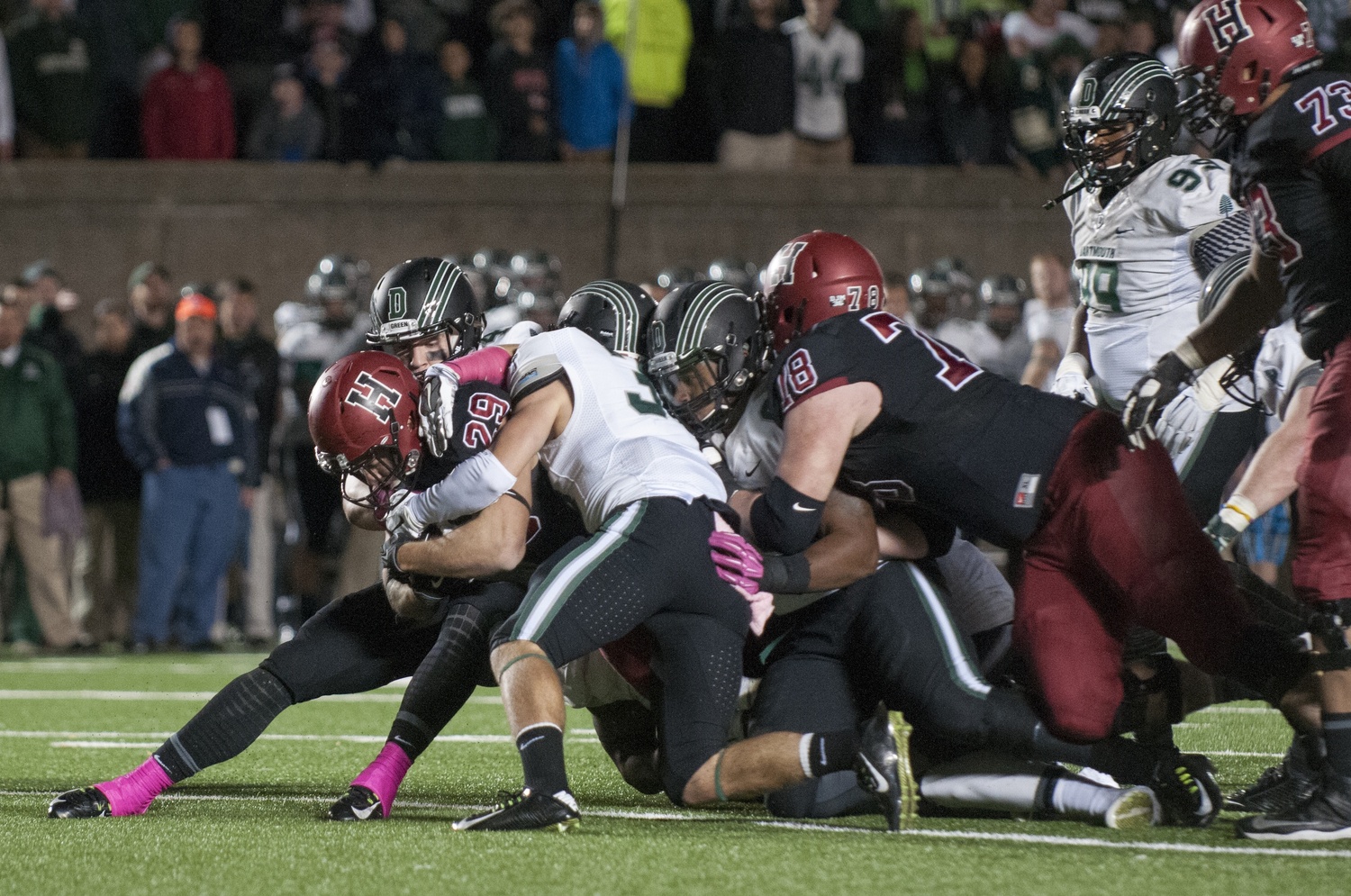 Senior running back Paul Stanton, pictured here, as well as classmates Scott Hosch and Seitu Smith all tried to punch the ball in from the one-yard line early in the fourth, but the Crimson was stopped five straight times. By Mark Kelsey

But five successive rushes, no matter the ball carrier, yielded the same no-gain result for the Crimson. The Big Green took over on downs, and the visiting fan section rejoiced.

Dartmouth had its own misses, too. A well-called trick play featured a lateral to receiver Ryan McManus, who then threw a perfect pass to wide-open fellow receiver Victor Williams in the front of the end zone. But Williams dropped the ball, negating a touchdown that would have given the Big Green a 17-point lead.

Down by 10, Hosch and company had a short field to work with on its first drive of the second half after a 53-yard kickoff return from Fischer set up Harvard at the Dartmouth 35. The Crimson could only move the ball four yards, however, and on a fourth-and-six, Hosch dumped the ball into the hands of Big Green linebacker Will McNamara.

Two holding penalties resulted in an unsuccessful ensuing Dartmouth drive, but the visitors got another gift on the next Harvard possession. The Crimson found its way into the red zone for the third time, and once more came up empty-handed when Stanton coughed up the ball and safety David Caldwell recovered it. The Big Green kicked its second field goal of the night on the following possession.

While Harvard struggled to get its offense into gear early, registering just a single first down in the first 12 minutes of play, Dartmouth came out of the gates rolling and scored on its first two possessions. The Big Green split the uprights on a 33-yard field goal to become the first Crimson opponent of 2015 to score on its opening drive.

On the ensuing Dartmouth possession, junior defensive end Davon Robertson sacked Williams on third down, but a facemask penalty on senior defensive tackle James Duberg resulted in a first down. A few efficient screens by Williams later, and the Big Green moved inside the five, before Stone punched it in to extend the lead to nine.

Williams ended the game with 311 passing yards, 49 yards on the ground, and no touchdowns, marking the first game in which he did not throw for a score.

—Staff writer Samantha Lin can be reached at samantha.lin@thecrimson.com.