'The Heart Goes Last' Unsettling but Not Unsatisfying

“The Heart Goes Last” by Margaret Atwood (Nan A. Talese) 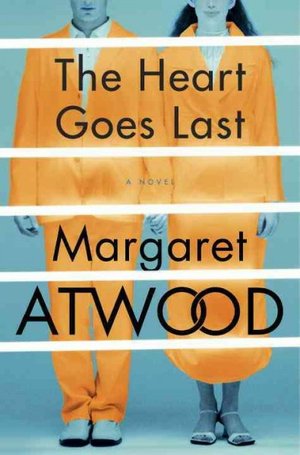 By Courtesy of Nan A. Talese
By Grace Z. Li, Contributing Writer

The epigraph of Margaret Atwood’s “The Heart Goes Last” consists of quotes from three texts: “A Midsummer Night’s Dream,” “Pygmalion and Galatea,” and “I Had Sex with Furniture.” At first glance, these three works seem unrelated. However, the three together effectively encompass the themes of Atwood’s novel: control, yearning, and detachment. Atwood effectively develops ambiguous characters who alternate among each of these three moods, as they frequently change their moral positions and respond to difficult situations in ways that can be equally understandable and disagreeable. By morphing the narrator’s voice to take after a given character’s, Atwood often encourages empathy in the reader. However, having to identify with the same person in so many different states, to switch between different characters, and to keep pace with the many parallel flip-flops in plot revelations, can leave the reader to feel much like the ending sentence of the novel: still in doubt.

The novel’s world is drenched in uncertainty, a quality which Atwood also skillfully develops within her characters’ internal contradictions. The most significant of these characters are a seemingly typical married couple, Charmaine and Stan, who happen to live in their third-hand Honda in a barren Western landscape of the near future. Society’s crumbling economic and social orders have left once-content people, now with no resources or laws, to fend for themselves. As a result, to say the least, Stan and Charmaine’s marriage is constantly on edge. In a move to survive Charmaine convinces Stan to join the Positron Project—a dubious utopian experiment—but after joining they are each swept up in their animal instincts, sexually drawn to others, and unable to point fingers at villains or applaud for heroes. Charmaine, the former housewife, takes on a secret job as the Project’s hospital executioner, finding her comfort in the comfort she offers her victims. Stan initially seems like a hero, but by showing Stan’s ridiculous plans to have an affair, Atwood also reveals how the morally upright hero can bend his principles.

The brilliantly presented climax of the novel exemplifies Atwood’s skill at conveying the harrowing idea that when society deteriorates, the most ordinary people are driven to unimaginable lengths. When Charmaine goes into the hospital room at this moment, she is informed by “the head” that her loyalty will be tested depending on whether or not she can carry out “the Procedure.” As the executioner, she is left confused. It isn’t until she slips on her gloves and steps over to the gurney that she realizes that her husband is the one who she is tasked to kill. Despite her love for Stan, from fear of punishment she slides the needle into his neck. In this scene, Atwood powerfully displays Charmaine’s feelings of helplessness, guilt, and desperation: “She strokes Stan’s head. ‘Shhh,’ she says to him. ‘It’s okay.’ She always strokes their heads, but this time it’s not any old head, it’s Stan’s head, with his bristly haircut.” Atwood’s sharp tone and wit are complemented by her ability to include vivid but simple details to ground the story. At its best, her prose can make even characters as unsettling as Charmaine relatable.

Unfortunately, however, because Atwood makes finding a hero so difficult, her accumulating plot twists can become tiresome and confusing. Some characters switch sides in their loyalties and are difficult to sympathize with consistently. The writing becomes especially disordered and fractured when Atwood shows Charmaine attempting to keep track of who is with or against her: “You promised, you promised, Charmaine wants to say. It must have been the water, something Jocelyn put in. Oh heck! You lying witch! But she can’t get the words out. Her tongue feels thick, her eyes are closing. Her whole body leaning sideways.” In addition, Atwood introduces a blue teddy bear fetish and prostitution robots, and while she keeps reinventing perceptions of her women and men with each added detail, it becomes a great challenge to keep a solid hold on the novel’s reality.

Nevertheless, “The Heart Goes Last,” amidst its tiring plot twists, is a captivating read. At the novel’s end, Charmaine is surprised by a visitor who forces her to come to terms with her own agency. “You prefer compulsion? Gun to the head, so to speak?...You want your decisions taken away from you so you won’t be responsible for your own actions?” This question is only met with another question, an apt illustration of the sort of novel this is. Its moral standards are unclear, but when Atwood is successful, “The Heart Goes Last” brings shameful thoughts, the things kept hidden, to the surface for illumination and redemption.