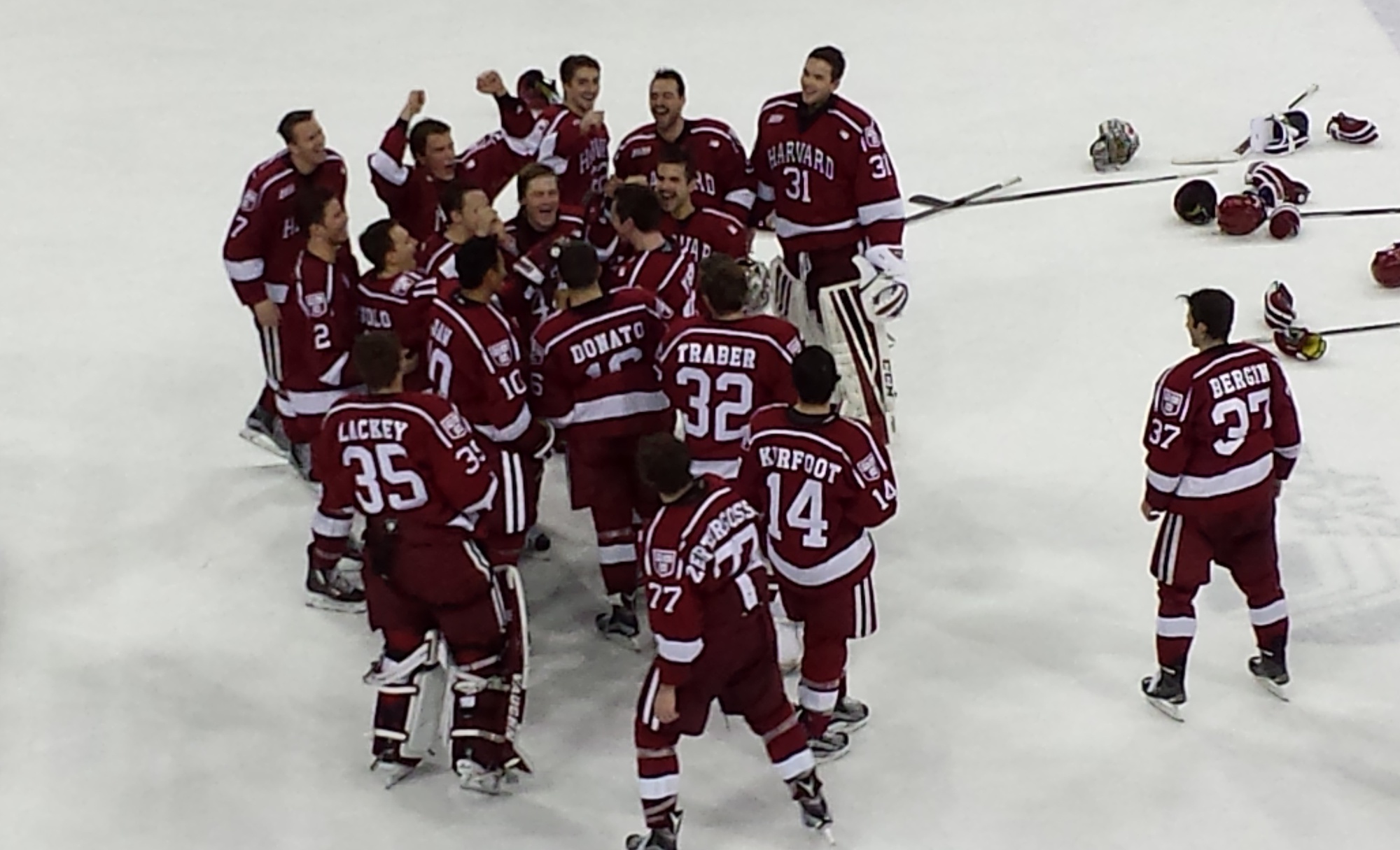 SOUTH BEND, Ind.—With the Harvard and Rensselaer Polytechnic Institute men’s hockey teams commanding two of the top three spots in the ECAC standings, a championship-deciding game between the two sides could be in the cards come March. 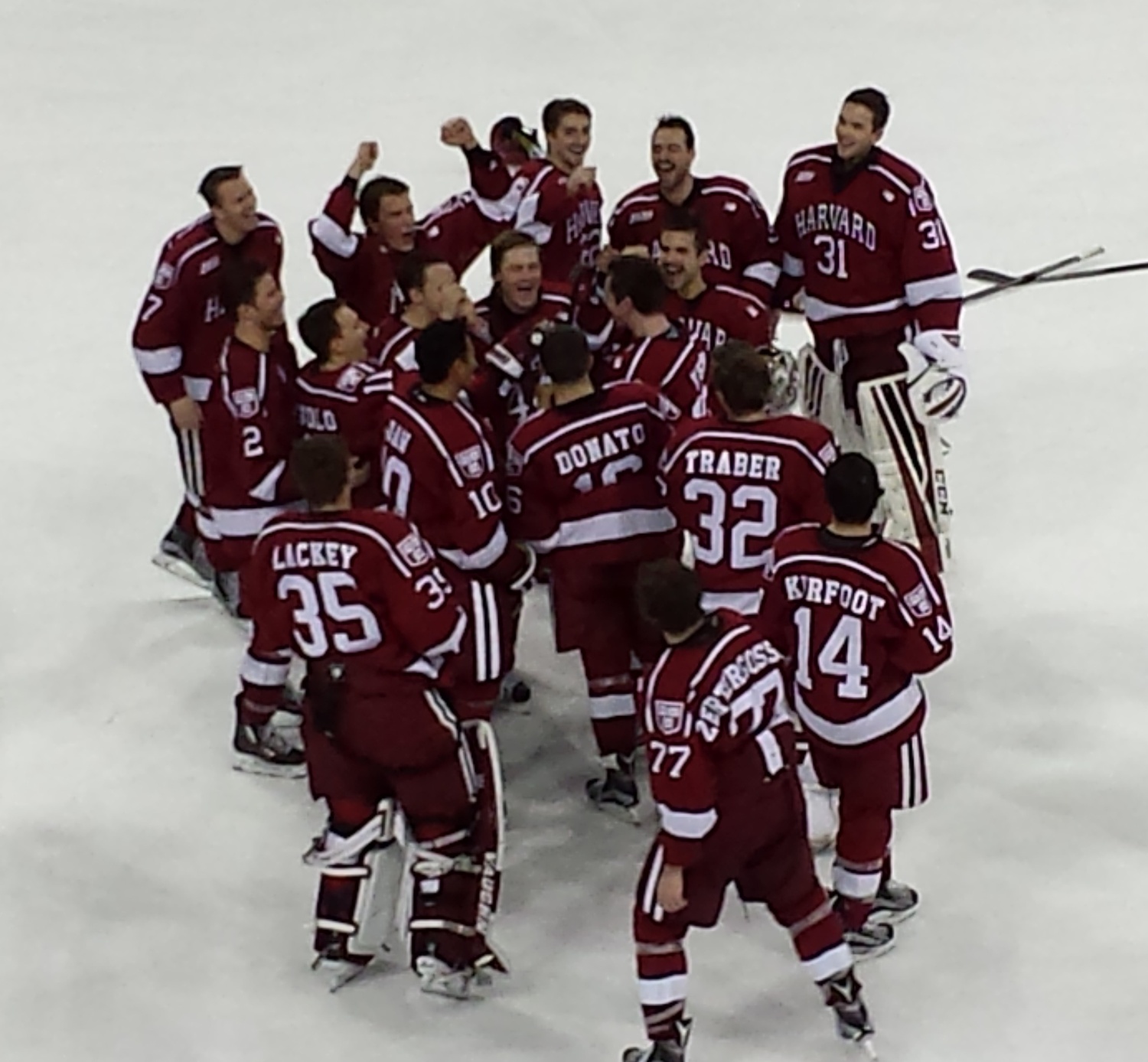 With a 4-0 win over RPI, Harvard captured its first Shillelagh Tournament title in school history Saturday. By Jake Meagher

But Saturday afternoon it was South Bend, not Lake Placid, where the two sides squared off with a trophy on the line in the final of Notre Dame’s Shillelagh Tournament at Compton Family Ice Arena.

And in the battle of supposed ECAC heavyweights, only one side looked the part, as the Crimson offense fired away at will, launching a season-high 45 shots on goal en route to a 4-0 victory and its first Shillelagh title in school history.

“You only have so many opportunities to win something,” Harvard coach Ted Donato ’91 said. “[Having] this tournament championship game was important even though it was against an opponent that we’ll see two more times…. They were as hot as almost anybody in the country coming in…[and] it got our guys’ attention.”

Much like it did here Friday night against Notre Dame, the Crimson spent much of the game on the man advantage—23 minutes in total. But unlike in its opener where Harvard converted on three power plays, the Crimson special teams unit came up empty, finishing 0-for-5 on the night.

But at even strength, Harvard could not be stopped. The Crimson’s first and second lines had their way with RPI, accounting for all four goals in the contest—including three in the second period. 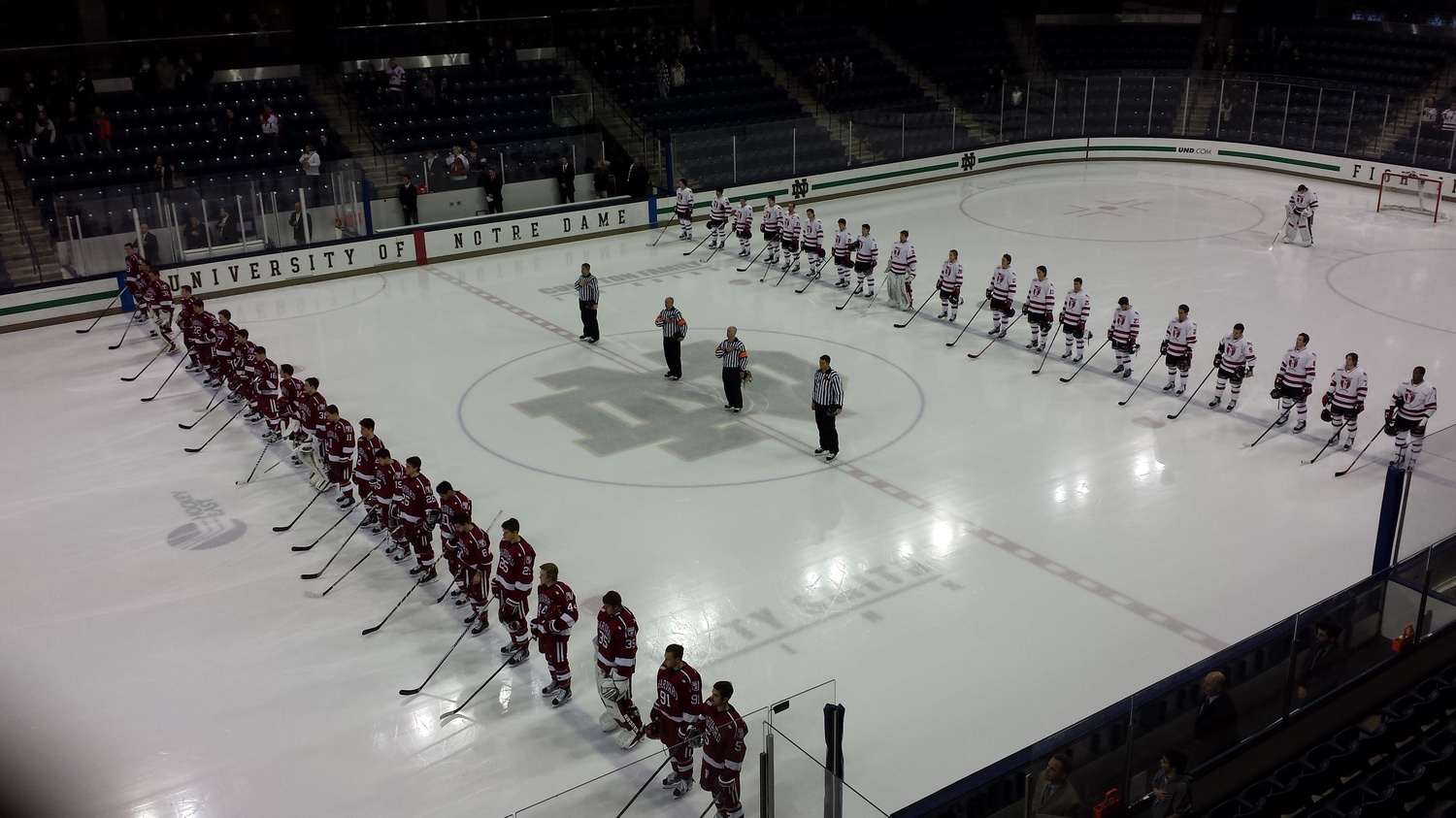 Harvard and RPI will line up against each other again next Saturday when the two sides square off in in a game that counts towards the ECAC standings. By Jake Meagher

After opening the middle frame with a one-goal advantage, the Crimson wasted no time adding to it. Less than two minutes into the period, junior forward Tyler Moy and freshman forward Ryan Donato helped wrestle the puck out from behind the net, setting up junior forward Luke Esposito at the right dot.

Just about as quickly as Donato’s pass reached the junior’s stick, the puck was in the back of the net, as Esposito’s rocket of a wrister beat freshman goaltender Cam Hackett to double the Crimson’s lead.

Six minutes later, Harvard’s Friday night hero—co-captain Kyle Criscuolo—tacked on his third goal of the weekend. Corralling the puck off a deflected Victor Newell blast from the point, the co-captain moved in all alone on Hackett and converted from the right post for the second time in as many nights.

Donato then gave the Crimson its fourth goal of the night from the bottom of the slot at 16:17. After faking a backhander to gain separation from his defender, Moy spun around to rip a wrister on net, which squirted in the direction of the rookie. Returning to his feet after getting knocked down seconds earlier, Donato put home the rebound, giving him his second point of the period after taking two penalties in the first.

“Being shorthanded twice in the first period wasn’t what we set out to do, and I definitely made mention of it to him,” Ted Donato said. “But he was working hard, and that line scored two big goals for us tonight.”

A four-goal lead was more than enough for Harvard sophomore goaltender Merrick Madsen, who made 31 saves to secure his third clean sheet in five starts. Madsen cut out all of the chances he saw, including three consecutive shots on an RPI 5-on-3 midway through the third period.

“I thought Merrick was excellent,” Ted Donato said. “I thought he was in control all weekend. He was calm in the net, and made plays look simple. I think you can see his confidence growing.”

Madsen entered the season locked in a goaltending competition with rookie Michael Lackey, but with wins in three straight games, Madsen now appears to have cemented his role as the starter. 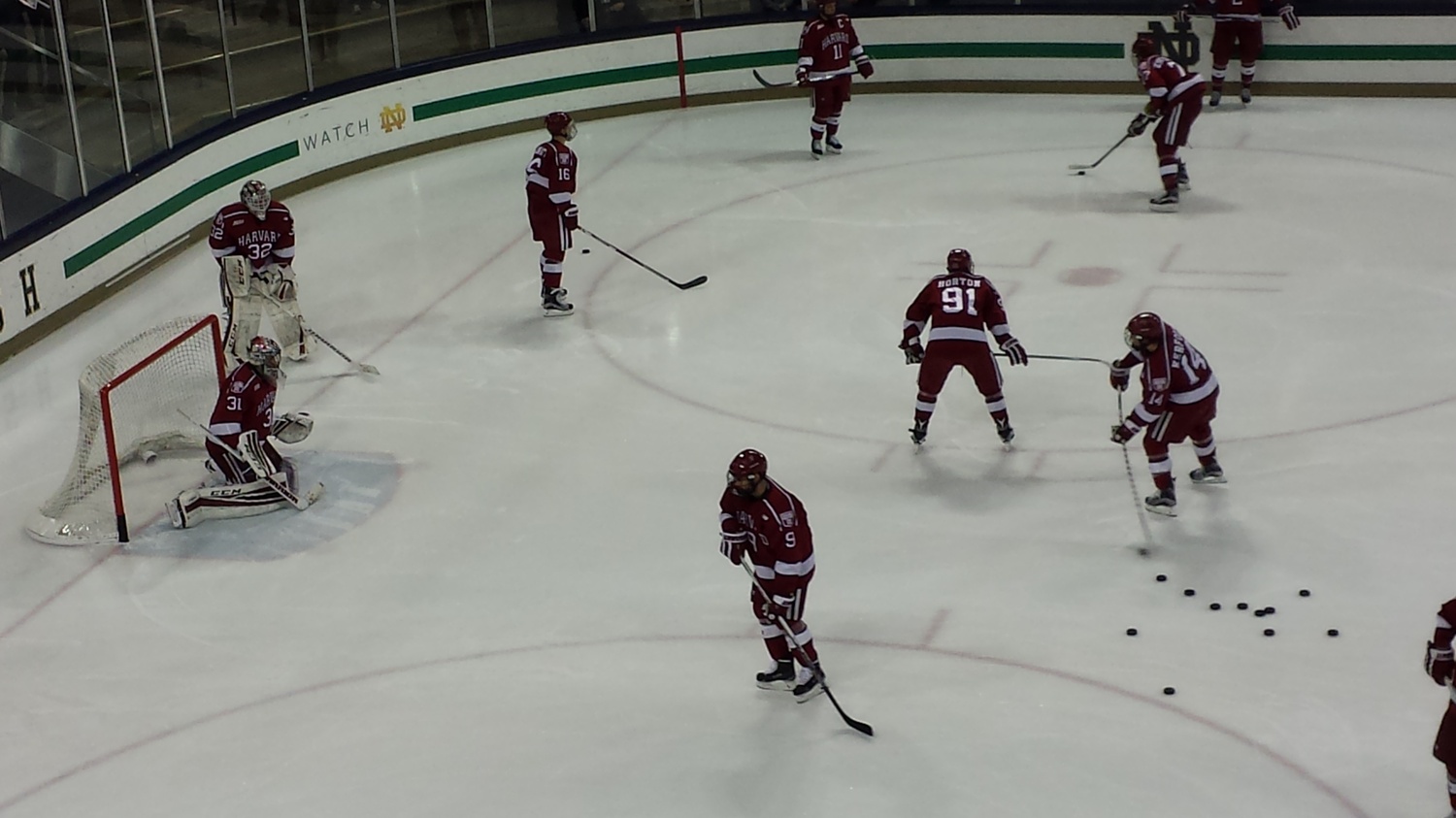 “There's obviously still things I've got to work on,” Madsen said. “I haven't been playing perfect games by any means, and there's things throughout the weeks and the rest of the year that I'm going to be continuing to work on. But obviously getting starts is what I'm looking for.”

The Acton, Calif., native finished the weekend with just one blemish and 60 saves, earning him tournament MVP honors. Madsen was joined by Criscuolo, Kerfoot, co-captain Jimmy Vesey, and Newell, the latter of whom entered the weekend with just three points in six games before recording three assists in the tournament, largely in part due to his new role as the point man on the power play.

The Engineers got out to a promising start in the first period, creating a handful of scoring opportunities on its two power plays. But the Crimson held its ground both times, finishing the game 5-for-5 on the penalty kill to improve its kill rate to 93 percent on the year—third-best in the country.

Five minutes after its final kill of the period, the Crimson opened the scoring in the same way it capped it on Friday—with a Vesey strike. Positioned behind the net, Criscuolo delivered a feed to Vesey crashing the net, and the Crimson’s leading scorer beat Cam Hackett at the top of the crease, providing Harvard with all the offense it would need. 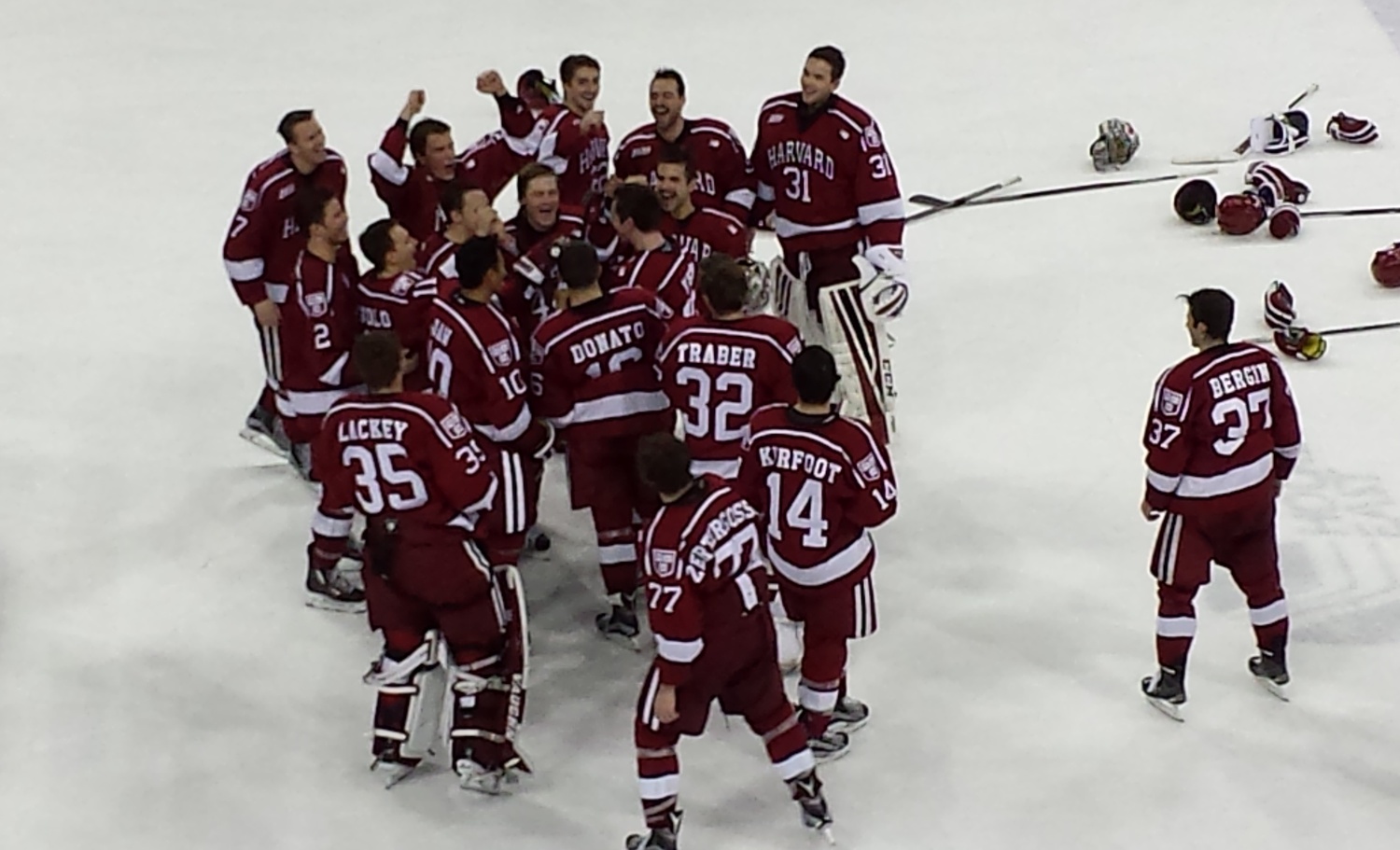