'City of Clowns' a Swirling Metropolis of Memories

“City of Clowns” by Daniel Alarcón, Illustrations by Sheila Alvarado 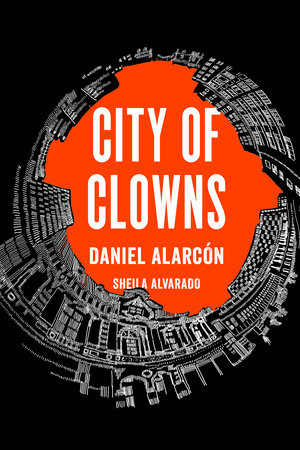 By Courtesy of Simon and Schuster
By Kay T. Xia, Contributing Writer

A clown towers on stilts, abstract flames like tufts of fur lick buildings, and a gang of piranhas swarms a car. In Sheila Alvarado’s graphic novel adaptation of Daniel Alarcón’s “City of Clowns,” bizarre images accompany an equally surreal storyline. Alvarado’s artwork plays with perspective, shadows, and time, with oversized clowns stomping over the cityscape, eerie images depicted in shadows, and characters drifting outside and between panels.

“City of Clowns” was Alarcón’s debut work, first published as a short story in The New Yorker in 2003. Since then, he has received numerous awards, including a Guggenheim Fellowship in 2007. Although Alarcón, as he reveals in the book’s afterword, likes to look back on his previous work to draw inspiration, he has never previously returned to “City of Clowns.” Alarcón’s flashbacks and leaps in time and setting are slightly more confusing in a graphic novel, but Alvarado’s images bring the original gritty, lyrical prose to life in a haunting and imaginative way.

The graphic novel paints a dark portrait of a Lima, Peru fraught with corruption and violence while maintaining a twisted sort of humor and irony. Alvarado’s black and white pictures create a dramatic representation of the city where Alarcón was born. The book’s protagonist, Oscar, is a young journalist whose father has just died. From the beginning, Alarcón suggests an atmosphere of corruption with Oscar’s uncomfortable introduction to his father’s longtime mistress and now wife, Carmela, and her three sons. Meanwhile, Oscar is assigned by his newspaper to investigate the population of clowns in Lima. Throughout Oscar’s exploration into the world of clowns, he recounts flashbacks of his youth and his relationship with his father. Alarcón and Alvarado depict an immersive whirlpool of poverty and social instability in which Oscar’s dignity and morality are brought into question against the backdrop of general desperation and dreams of the good life.

Alvarado’s artwork seizes and exaggerates the unpolished and disorienting mood of Alarcón’s story. Her vertiginous cover illustrates a circle of towering buildings looming like the walls of a well viewed from within the well shaft. Often the texture of the pen marks and shading is visible, creating a fuzzy, sketchy effect and giving a sense of motion and hurriedness to the images. Every once in awhile there are pages in which the black and white colors have been reversed, like a starkly contrasted film negative. Often in those pages, a character’s face or an area of the scene will be highlighted in lighter colors, as if under a spotlight. The black background and white lines in these scenes add to the darkness of the plot and suggest shady activity. Midway through the story, the cover illustration dizzyingly reappears. It is supplemented with text written in a spiraling circle, in which Oscar realizes, “Lima was, in fact and in spirit, a city of clowns.” As the story itself jumps between flashbacks and the present, the disorienting quality of the setting and the plot is further embodied in the artwork.

Alarcón’s story provides a penetrating treatment of themes of morality and desperation that Alvarado’s thought-provoking depiction of Oscar complements. The connection between these two aspects of the book is made through a recurring motif of clowns and pathetic existences. Clowns in Lima are essentially street performers, scraping together a living by dressing in vibrant costumes and panhandling for change. Oscar too dons a disguise when he begins to attend a private school. His poor background isolates him from the wealthier students—both inspiring contempt from his peers and intimidating them, as they speculate on his involvement in criminal activities. Ironically, their negative vision of him becomes a self-fulfilling prophecy as Oscar eventually does get involved in some of his father’s shadier occupations. As the story progresses, it becomes increasingly unclear whether Oscar is wearing a disguise or actually becoming the person his disguise portrays. Through these masks and disguises, Alarcón and Alvarado relatably convey the universal experience of how confusing it can be to seek and discover one’s identity as a young adult.

Though the visual representation of Oscar’s coming-of-age adds a lot to the original story, the main shortcoming of the graphic novel adaptation is that the leaps in time throughout the story become harder to follow. As the plot jumps between Oscar’s current investigation on clowns and flashbacks to his childhood, the chronological sequence of events is not always clear. The time jumps are easier to keep straight in the original short story. The confusing layout of the plot, and its abrupt end, add to the overall feeling of disorientation in the story, but it is unclear whether Alvarado intended this effect.

On the whole, the content of the graphic novel is faithful to Alarcón's original text—but a provocative addition in the graphic novel is a scene where Oscar recounts a relationship with a girl who wore stilts as part of a church youth group circus. The scene contributes an aspect of sexual balance in power to the story, which was less present in the original. This scene is the only time sex is explicitly mentioned in the entire story, and it is depicted in an intimidating, disturbing way. The girl towers looms darkly over Oscar: “gone was the timid and cautious girl,” and Oscar “buried [his] face in her crotch, and worshipped this majestic woman.”

The dark and disorienting mood of Oscar's childhood and his relationship with his parents is poignantly and viscerally embodied in Alvarado's illustrations. The graphic novel is a more developed version of the short story that further pushes the themes of disorientation, desperation, and corruption presented in the original text. Alvarado’s drawings, which bring vignettes of youthful confusion and social disorder in Lima to motional and emotional life, make the graphic novel an inventive and moving adaptation, full of surreal imagery and disturbing action.