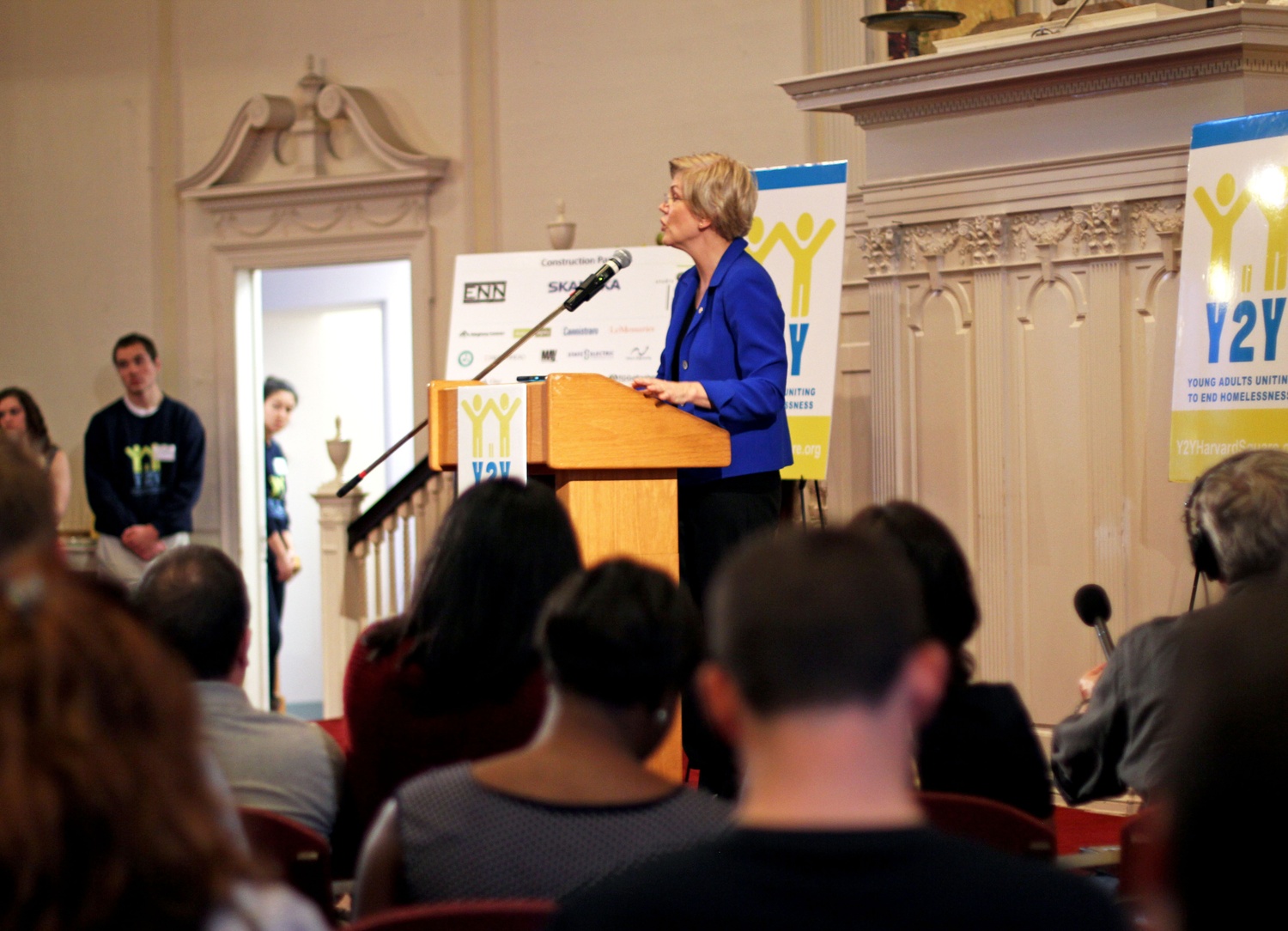 U.S. Senator Elizabeth Warren spoke at the opening celebration for Y2Y Harvard Square, the youth homeless shelter that will be opening in December. “All young people have a right to live safely and with dignity,” Senator Warren said. “Y2Y Harvard Square will play an important role as a safe place and resource for youth in our community who need a chance to get back on their feet.” By Annie E. Schugart
By Sara A. Atske and Stephen M. Gillinov, Crimson Staff Writers

In front of a packed chapel of about 600 attendees, Y2Y Harvard Square celebrated its upcoming opening on Friday as the nation’s first student-run youth homeless shelter alongside U.S. Senator Elizabeth Warren.

The shelter, now set to open to young adults between the ages 18 and 24 in December, looks to serve as a “sanctuary” for local homeless youth. Shelter staffers will include volunteers from Harvard’s Phillips Brooks House Association, young adults who have previously experienced homelessness, and members of Y2Y’s adult advisory board.

The shelter is in the final phases of construction in the basement of First Parish Church, the venue for Friday’s ceremony. It will supplement existing services of Youth on Fire, an organization that offers LGBTQ-friendly daytime drop-in services for homeless youth ages 14 to 24 seven days a week.

The day before Friday’s launch event, more than 300 donors helped complete a $50,000 crowdsourcing campaign, marking the end of a $1.25 million capital campaign.

“We weren’t built by our hands alone,” said Needham B. Hurst, the shelter’s data director. “It was the community that came together.”

Warren, the senator from Massachusetts, kicked off the event, reflecting on the shelter’s construction and praising everyone who supported the endeavor.

“[Sam and Sarah] said, ‘We are...going to get out there and advocate on behalf of those who need our voices to be heard,’” Warren said. “They saw a problem, they had a vision for how to fix it, and that’s what’s going on downstairs.”

“Homelessness is one of those things that people really see and get so used to ignoring,” said Jamila Bradley, a member of the Y2Y team who called attention to the advocacy work that preceded the opening of the shelter. “To have trips to the State House matter and have a permanent and tangible result and response...I don’t have words for that.”

While Y2Y Harvard Square’s space is on the cusp of completion, the shelter’s work is in its early stages. Looking forward to the routine operations of the shelter, Greenberg said he anticipates “22 meals to prepare every night, hundreds of dishes to wash, and loads of laundry to do—in a lot of ways [the] journey is just getting started.”