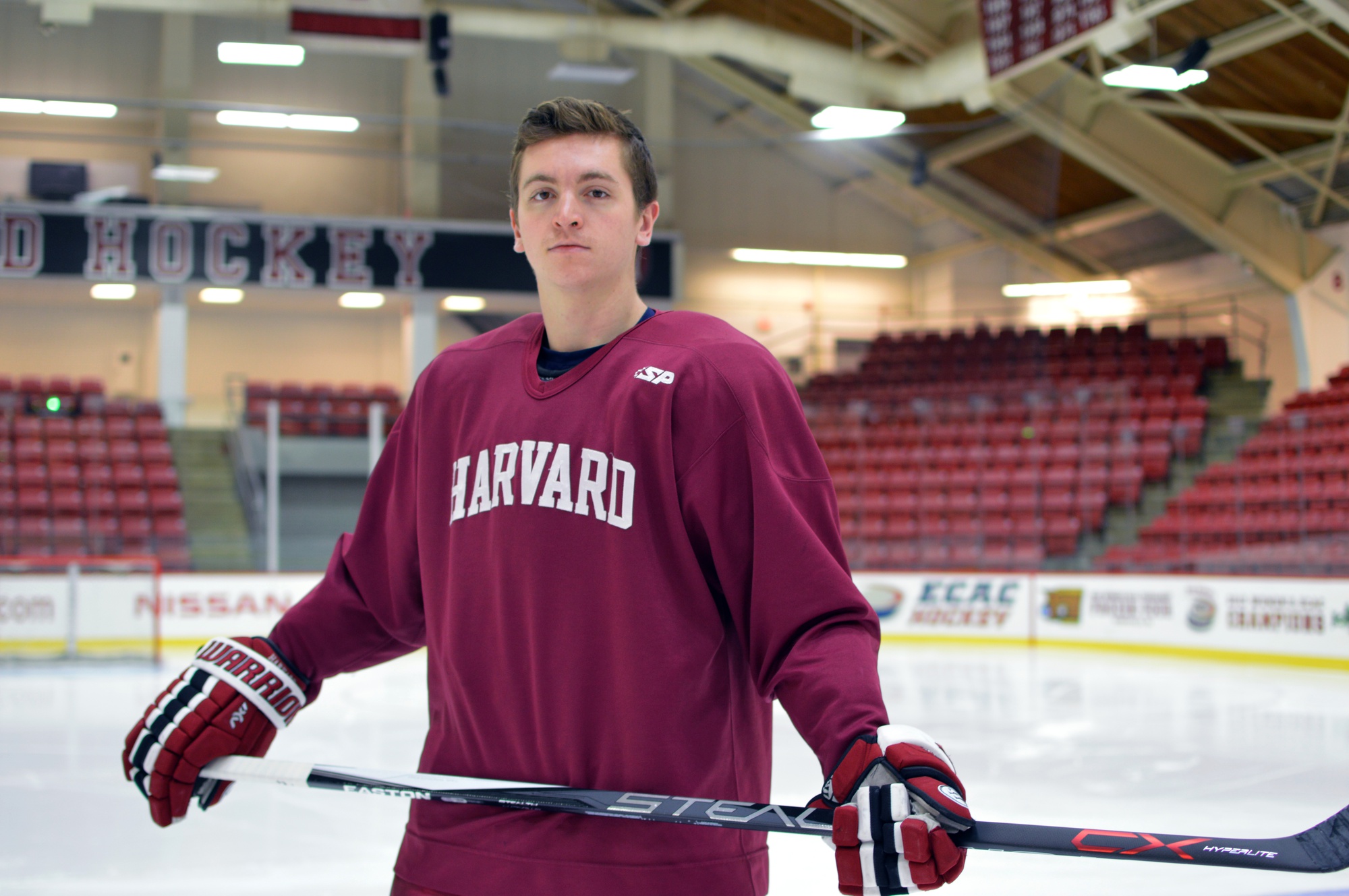 Jimmy Vesey '16 is the outgoing captain of the men's hockey team. Vesey was honored with Hobey Baker Memorial Award Award, given to the top player in college hockey, in April. By Megan M. Ross

Jimmy Vesey is a rare breed—a master on the ice and in Mandarin.
By Kurt T. Bullard

“I didn’t think people knew who I was here.”

Those are words you wouldn’t expect from a college athlete who has been in the national spotlight for over a year and has taken home some of his sport’s most prestigious honors. But at a school where the Lamont culture is probably stronger than the hockey culture, most kids don’t perk up when the senior forward from the men’s hockey team walks around campus.

“I’m kind of a quiet guy,” Jimmy Vesey '16 says.“I’m not really outgoing besides with the guys on the hockey team. So it was a bit of a surprise I was chosen for this.” 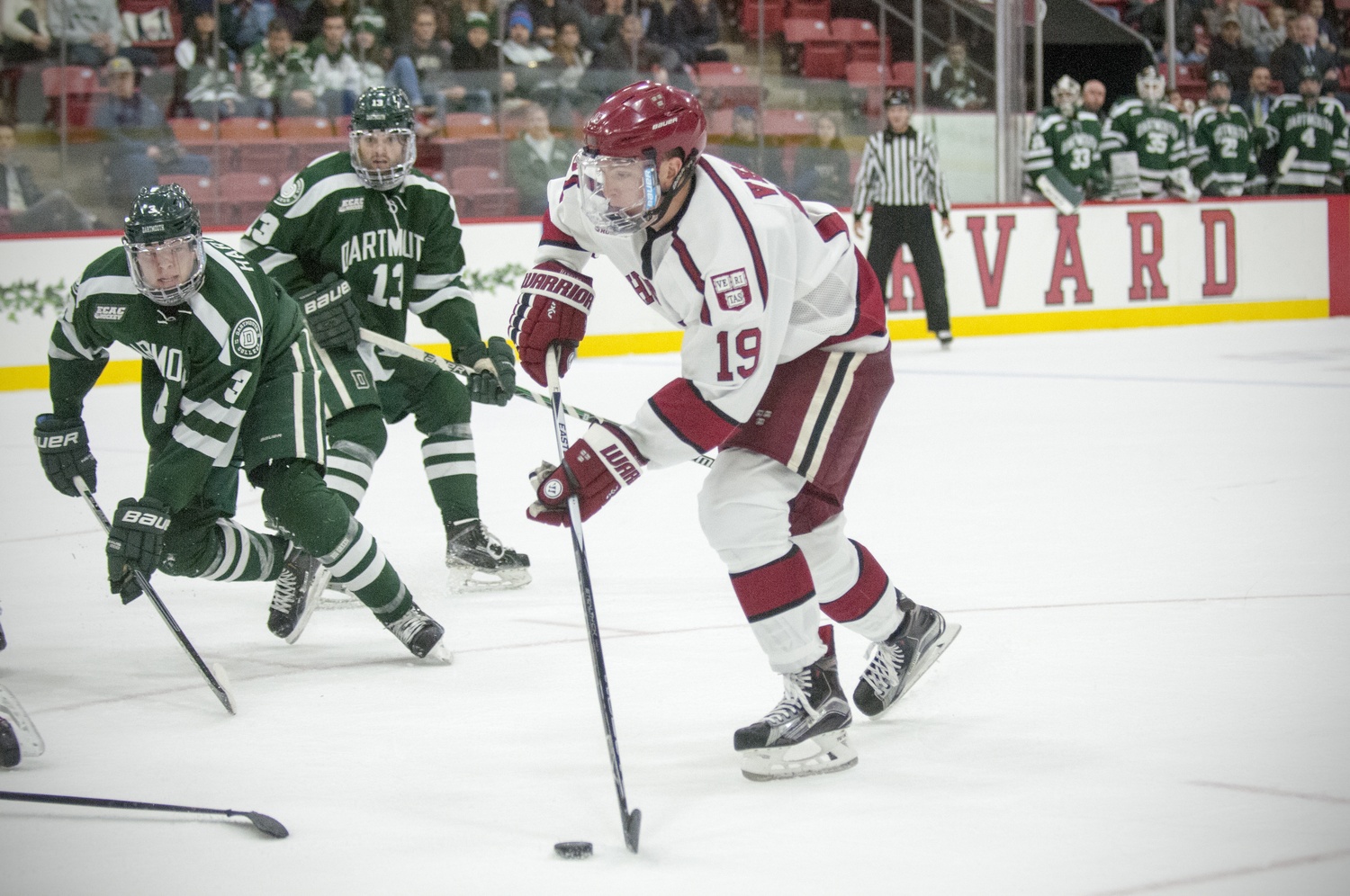 Jimmy Vesey, shown in action against Dartmouth on Nov. 1, has recorded eight goals and eight assists for the Harvard men's hockey team through 10 games this year. By Mark Kelsey

Last year, Vesey took home the Walter Brown award, given to New England’s best American-born player in NCAA Division I men’s hockey. He put up a league-high 32 goals to go along with 26 assists. This summer, he played on Team USA in the IIHF World Championship alongside professionals such as Bruin Torey Krug. He finished as a runner-up for the Hobey Baker award—honoring the best overall player in D-I Hockey—to childhood acquaintance Jack Eichel, who currently has eight goals and five assists for the NHL’s Buffalo Sabres.

Last year, Vesey had a chance to follow Eichel as well as Mark Zuckerberg and Bill Gates and leave early to pursue a lucrative opportunity outside of Cambridge, Mass. The Nashville Predators General Manager, David Poile, was actively rooting for Harvard to lose in its playoff run so that he might lure Vesey to leave Harvard early and contribute to the Preds’ playoff push. But Vesey made the decision to stay and work towards completing his Government degree. 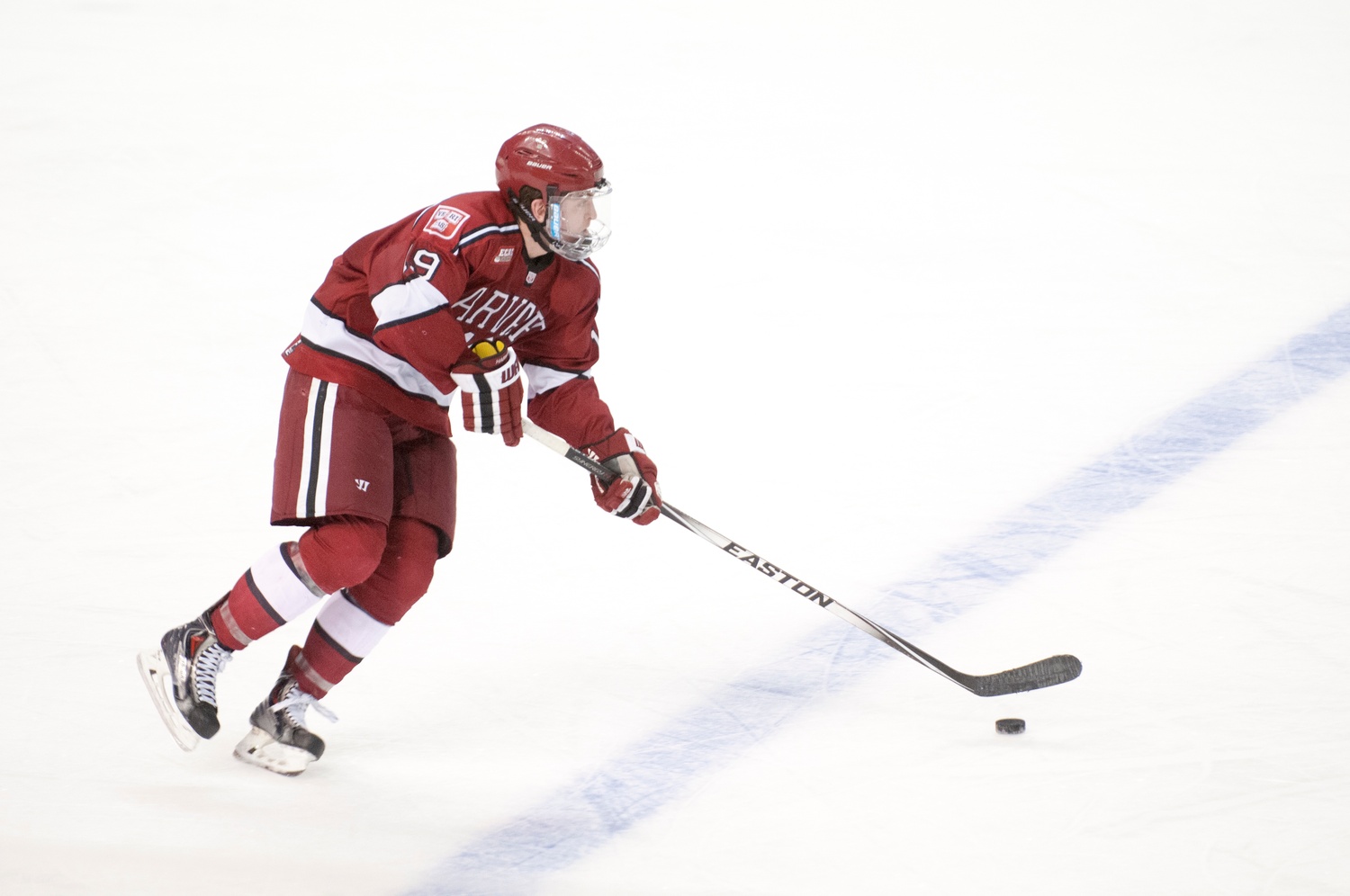 “Watching NHL highlights, I sometimes see guys I grew up with playing or played against in college or played on Team USA with,” Vesey says. “Sometimes I’m like, ‘That could be me,’ but at the end of the day, I’m going to have a Harvard degree.”

Living in Cambridge rather than Nashville brings an additional burden that most college hockey players at other premier programs don’t face: a Harvard course load.

“[Other] schools would probably be a lot easier,” Vesey says. “I think [other players] get a lot of breaks from their college and their professors. Here, we’re treated like every other student.”

Staying at Harvard also ensured the winger one more year in Boston, where he grew up and has spent his entire life. The Charlestown, Mass., native went to Belmont Hill High School. For Vesey, being close to home was a significant factor in both choosing Harvard to play college hockey and electing to return for his senior year. So too, perhaps to a lesser extent, was a fear of cooking and doing laundry.

“I’m pretty nervous [about moving to Nashville], actually,” Vesey said. “I usually go home a few Sundays a month and my mom does my laundry. I’m also scared of having to make my own food.”