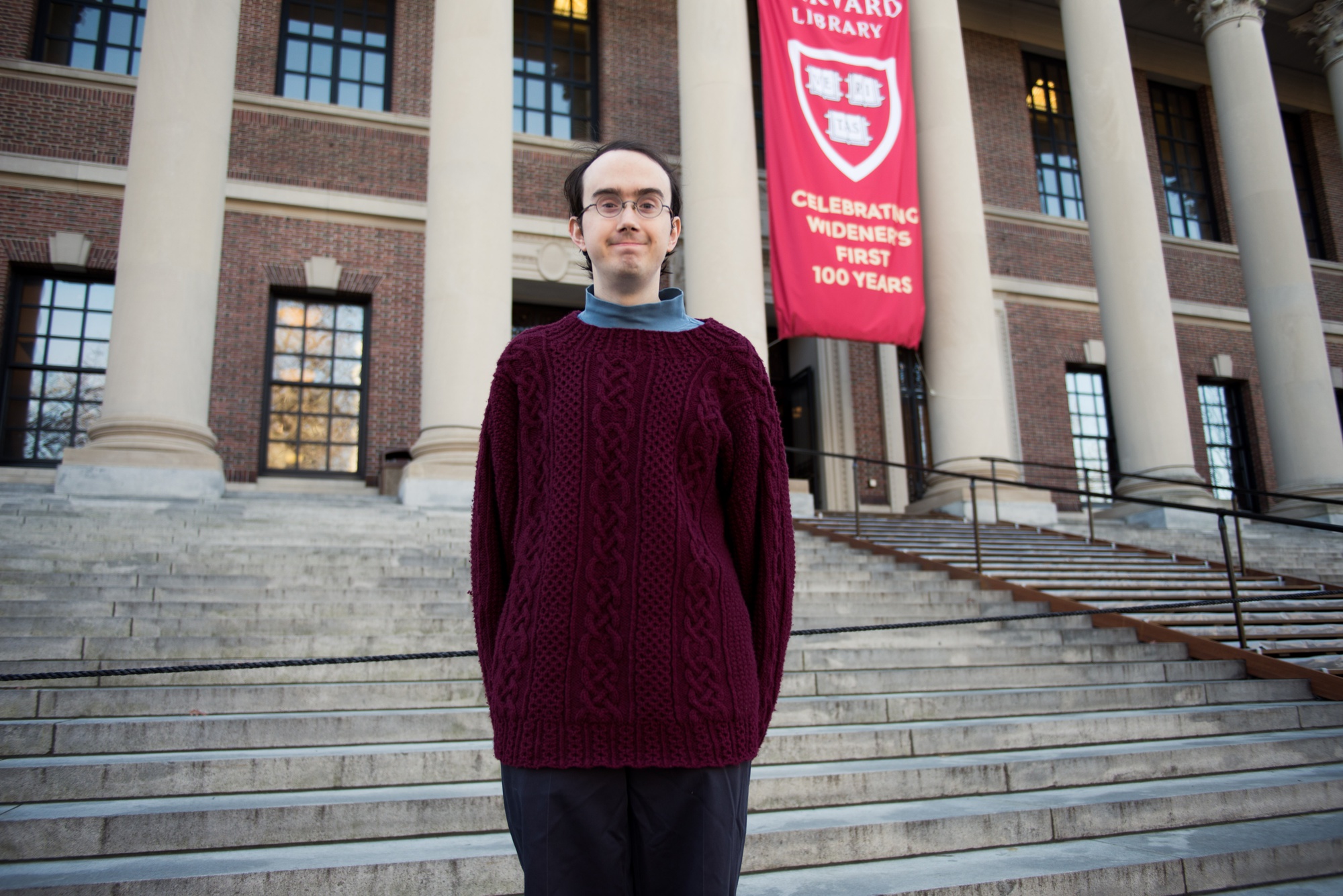 Mark J. Arildsen '16 poses outside Widener Libary, one of his favorite places on campus besides the dining hall in Currier. By Alana M Steinberg

For instance, the capital of the Fergana Valley is Khujand.

For instance, the leading export of Zambia is refined copper.

Arildsen reaches under his gray Harvard Physics department fleece and pulls out his phone. He reads “My Childhood Home I See Again.” It’s about the death of young soldiers. Arildsen grimaces, and pushes his round glasses up his nose. “Pretty depressing stuff.”

As a high school student at the University School of Nashville, Arildsen placed first in the National History Bee & Bowl. He had already placed third in the National Geographic Bee—winning a $10,000 scholarship—at the age of 13. Now, he’s a Physics concentrator with a backpack covered in GeoBee decals. He’s a Harvard Quiz Bowl competitor with a penchant for the oddities of mountain formation and national borders.

Yet after nearly a decade of capital-memorizing and buzzer-slamming, Arildsen believes that geography is as much about drawing connections as it is about collecting facts.

“[Geography is] about the study of cultures and peoples and natural science and the various forces that shape the world,” he says. For Arildsen, there’s a story behind each piece of trivia.

Arildsen illustrates. He pulls a napkin out of the container on the center of the table, and draws the western border of the United States and Canada. In the space between Vancouver Island and Washington State, he draws several small circles to represent islands. He outlines the boundary dispute that started the Pig War in 1859. 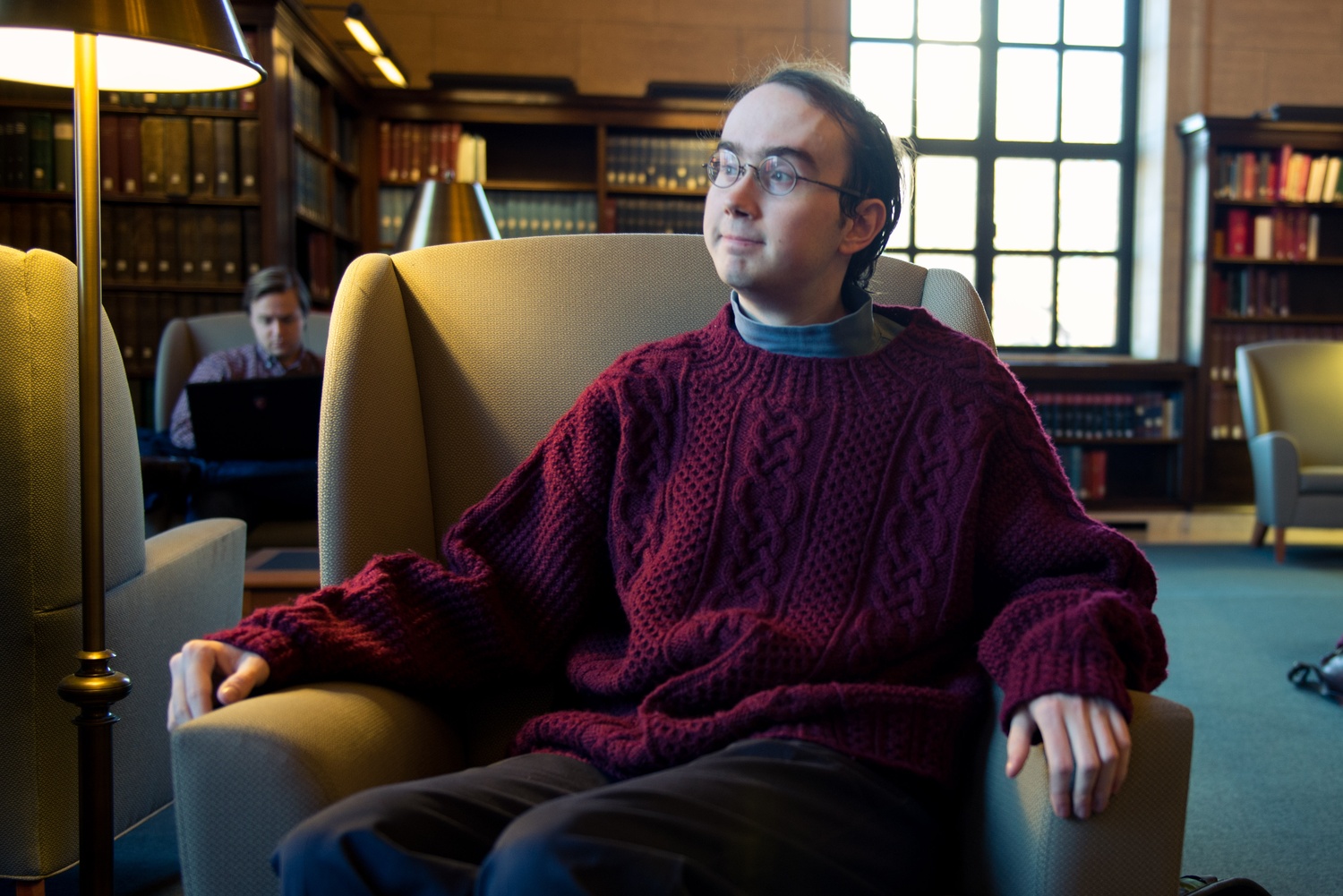 When you compete in academic challenges, Arildsen explains, you have to memorize some funny names of wars: “Then you realize that there are 100,000 funny names.” 100,000 reasons to go to war.

Arildsen draws a line that represents the settlement of the dispute. Then he tosses the napkin aside. “Infinite free paper!” He grins. Arildsen and his friends started “the napkin system” during a late night physics session in Currier d-hall. He likes working in the dining hall because when the automatic fountain turns on at 4:30 a.m., it reminds him to go to bed. He’s taking three graduate courses in physics this semester and hopes to study at Stanford or MIT next fall.

Late nights scribbling physics equations on napkin pads and weekends brushing up on geography have left Arildsen with less time to focus on his other academic passion, Latin. Still, he’s maintained his ear for the language and its grammar by practicing puns.

“Why did the Roman centurion give his troops Nutella?” Arildsen asks, drawing a blank look.

“To slaughter their enemies!” He answers, drawing another blank look. Arildsen explains that the joke’s funny because “tella” means “spears.” Unfortunately, Latin puns are lost on most audiences.

Arildsen’s fondness for collecting puns and trivia puzzles his physics advisors, because the science almost discourages memorization—if you understand the formulas, you should know how to derive them. Yet Arildsen, who first started studying physics when his parents, both doctors, bought him a bound set of Richard Feynman’s lectures, says that he likes physics for the same reason that he likes facts.

“It’s the idea that you have this really complicated universe, but that at some level you can understand it,” he says. “You can systematically approach it and break it down into its component parts.”

Arildsen knows from experience that small observations matter in science. At the age of 15, Arildsen broke his arm while hiking Mt. Washington in New Hampshire. The orthopedist who treated Arildsen noticed that the tips of his fingers bulged slightly and curved under his nails—a disfiguration called “clubbing,” a classic symptom of cystic fibrosis. Arildsen was tested for and diagnosed with the chronic lung disease, and now maintains his pulmonary functioning with daily treatments. The orthopedist’s second glance at his fingers saved his life.

Arildsen’s own research focuses on the smallest parts of the universe. In high school, Arildsen studied subatomic particles—quarks—via b-tagging in heavy ion collisions. Now, he’s studying the light optics of beetle wings at the Harvard School of Engineering and Applied Sciences. When Arildsen explains his research, he demonstrates the motions of quarks and light particles with his hands: thousands of infinitesimal pieces, flowing in the path of the universe.