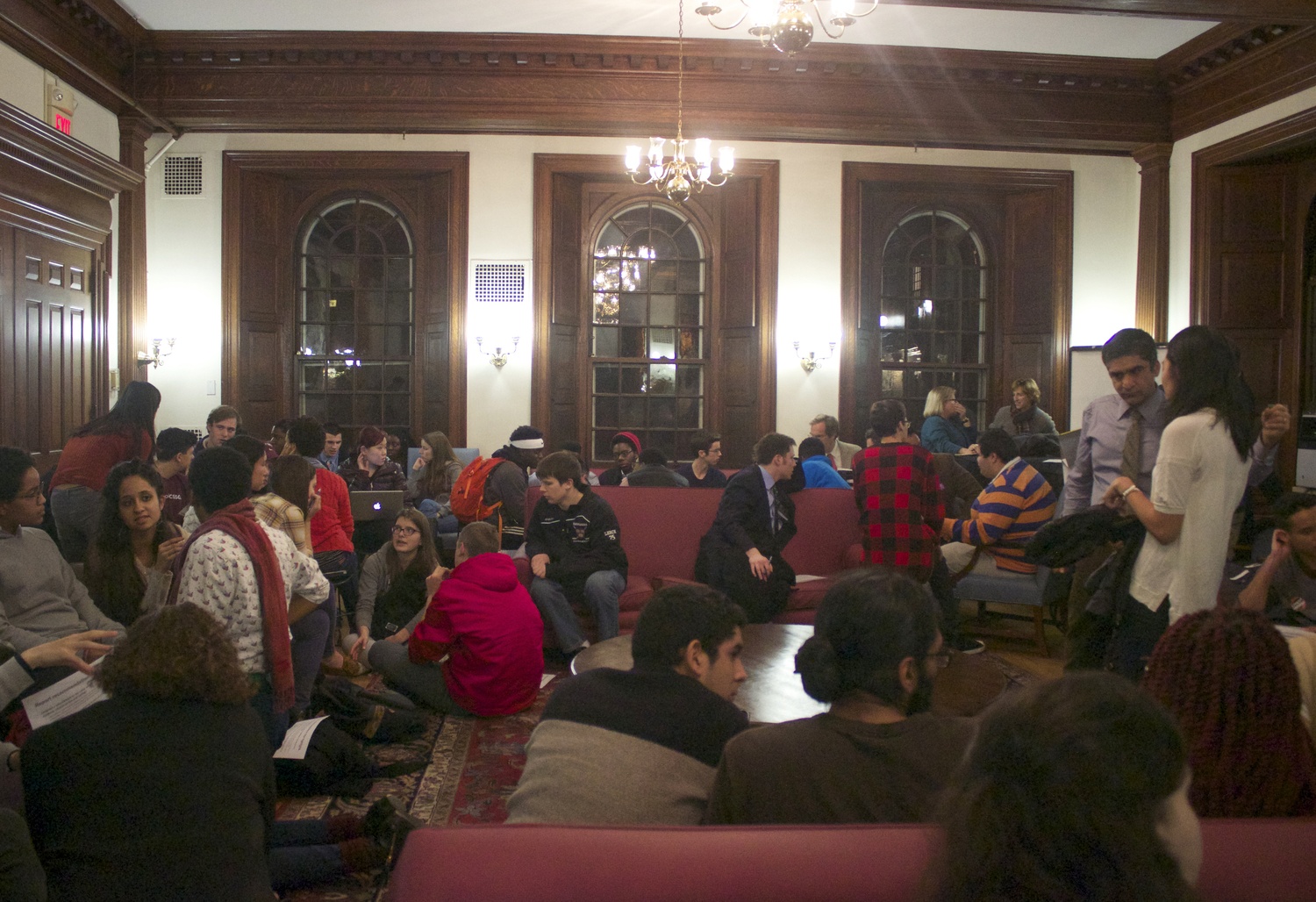 Dean of the College Rakesh Khurana speaks individually with an undergraduate as other attendees brainstorm in small groups what they would like to see the College focus on in terms of inclusion going forward. During the discussion on Wednesday night, Khurana and Brandon M. Terry ’05 talked about short and long-term goals and emphasized the importance of accountability. By Savannah I. Whaley
By Jalin P. Cunningham and Noah J. Delwiche, Crimson Staff Writers

To a crowd of more than 40 undergraduates, Dean of the College Rakesh Khurana fielded student criticisms on the state of diversity programming on campus and promised Wednesday night to implement short-term initiatives outlined in a recent report on diversity at the College.

On a short-term basis, Khurana said he will immediately allocate funding for students to invite more diverse speakers to the College and work to study more developed mentorship programs between students, faculty, and recent alumni of color. He also outlined longer term goals, such as increasing diversity among Harvard’s faculty and creating more course offerings that focus on topics of diversity.

Khurana emphasized the exigencies of these issues in light of rampant national controversy over the state of institutional diversity at campuses and recent legal challenges to race-based affirmative action at Harvard and other schools. He called the plaintiff’s argument in a high profile U.S. Supreme Court case challenging the University of Texas at Austin’s use of race-based affirmative action—which began oral arguments hours before the town hall—as an affront against Harvard’s “fundamental project.”

“I don’t want to miss this window,” Khurana said. “I feel a sense of urgency around this, but also a sense of propping up that window, that this is not something that we can just be superficial about.”

Khurana framed the town hall as a chance for undergraduates to voice opposition to or support for specific recommendations in a comprehensive report from a College working group tasked with assessing the state of diversity programming and the experiences of minority students on campus. Released in late November, the 37-page report calls on administrators to bolster training around student life issues, augment the accessibility and diversity of course offerings, and promote diversity among the College’s faculty and disciplinary bodies. University President Drew G. Faust has already accepted a recommendation by creating a University-wide task force to study issues of diversity. 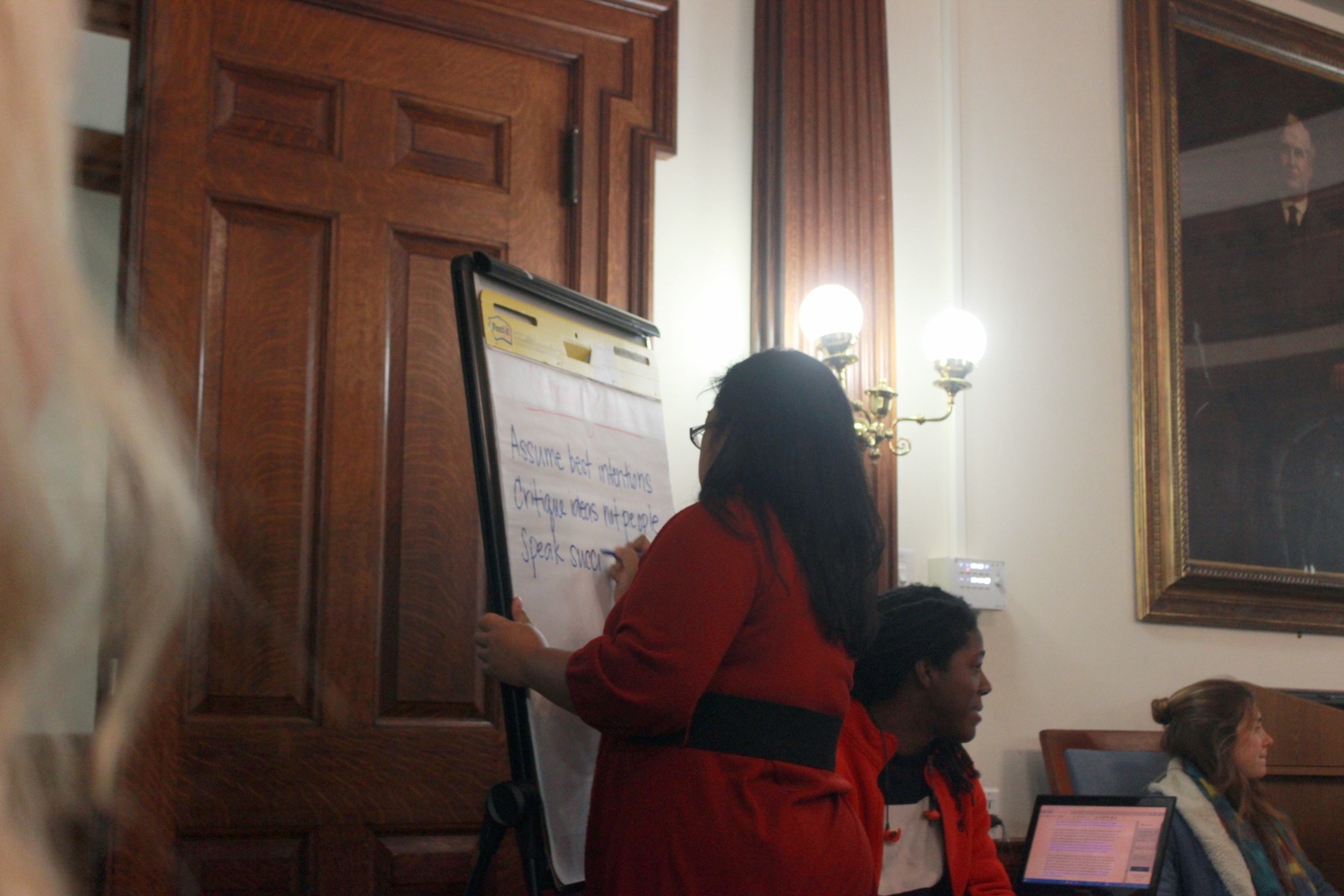 Assistant Dean of Student Life for Equity, Diversity, and Inclusion Emelyn de la Peña writes down guidelines for the discussion on the recently-published report written by Harvard's Diversity and Inclusion Committee. Topics discussed ranged from the lack of diverse representation in the College's general education program to the problems faced by Arab Americans, who feel that they go unrecognized on campus. By Savannah I. Whaley

At the forum on Wednesday, undergraduates alternated offering commentary on the report, and some were skeptical of administrators’ proposed timeline for implementing the report’s recommendations.

Tiffany M. Ramos ’16 asked whether administrators would change the College’s core curriculum, which was recently deemed “failing on a variety of fronts” and is now under review, to require students to take a course on gender, ethnic, or cultural studies. The College’s diversity working group reviewed current curricular offerings and found that less than 4 percent of all courses “substantially and critically with issues of diversity and inclusion,” according to a handout distributed at the meeting.

Administrators hope to increase courses that focus on race and diversity and more publicly display them in online search tools, said Brandon M. Terry ’05, a co-author of the diversity report and an assistant professor of African and African American Studies and Social Studies.

Other students criticized the breadth of the diversity recommendations, arguing that administrators failed to adequately include commentary on some student experiences.

Anwar Omeish ’19 said she saw little representation of Arab American students in the report, which is geared toward creating a more inclusive campus environment for all students of color.

“The discussion on inclusion excluded me,” Omeish said. “I don’t see Arab Americans being thought about in any way.”

William A. Greenlaw ’17, a representative on the Undergraduate Council, said he was concerned that creating more committees on diversity and inclusion may be counter-intuitive to the underlying goals of the report. Specifically, Greenlaw highlighted the formation of the University-wide diversity task force, in addition to the working group at the College level.

“I worry that… we miss opportunities to take meaningful action right now,” Greenlaw said. “How will you ensure that the formation of more discourse and more committees like these don’t prevent the University from being more proactive in attacking the issues that they say will be done in the short term?”

Terry responded generally to students and encouraged all people at the meeting to act seriously toward affirming a University-wide commitment to diversity.

“If we don’t continue to push this in every way, it will fail, and there are enemies to this project,” he said.

Some students criticized the tone of ongoing campus debates.

Tyler Jenkins ’19 said Harvard affiliates should debate the calls for administrators to remove or alter symbols that are associated with slavery or other historical atrocities. The College’s House masters recently agreed unanimously to change their title after some students said the name conveyed ties to slavery. Some Harvard Law School students, meanwhile, are demanding that administrators change the school’s seal because of its connections to a slaveholding family.