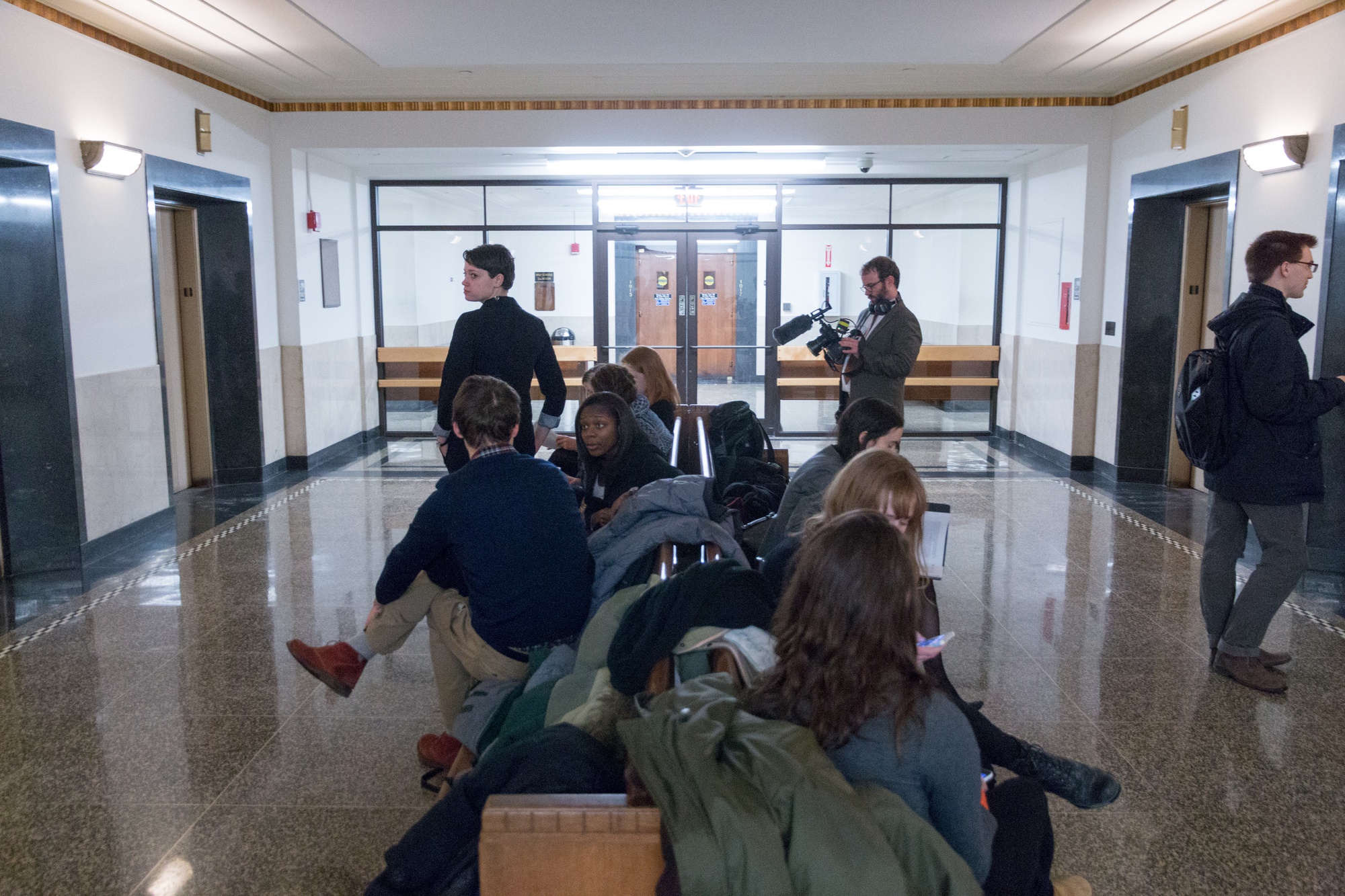 Members of Divest Harvard gather in the elevator lobby just outside a Suffolk County courtroom Friday.
By Mariel A. Klein, Crimson Staff Writer

A Massachusetts Superior Court judge on Friday did not issue a final decision on motions by Harvard and the state Attorney General’s office to dismiss a lawsuit suing the University to divest from fossil fuels.

Last November, seven University students filed an 11-page complaint claiming that Harvard’s investment in fossil fuel companies signifies “a breach of [Harvard’s] fiduciary and charitable duties as a public charity and nonprofit corporation.” The plaintiffs, who call themselves the Harvard Climate Justice Coalition and are all members of activist group Divest Harvard, also alleged that the University is mismanaging its endowment in “abnormally dangerous activities.” 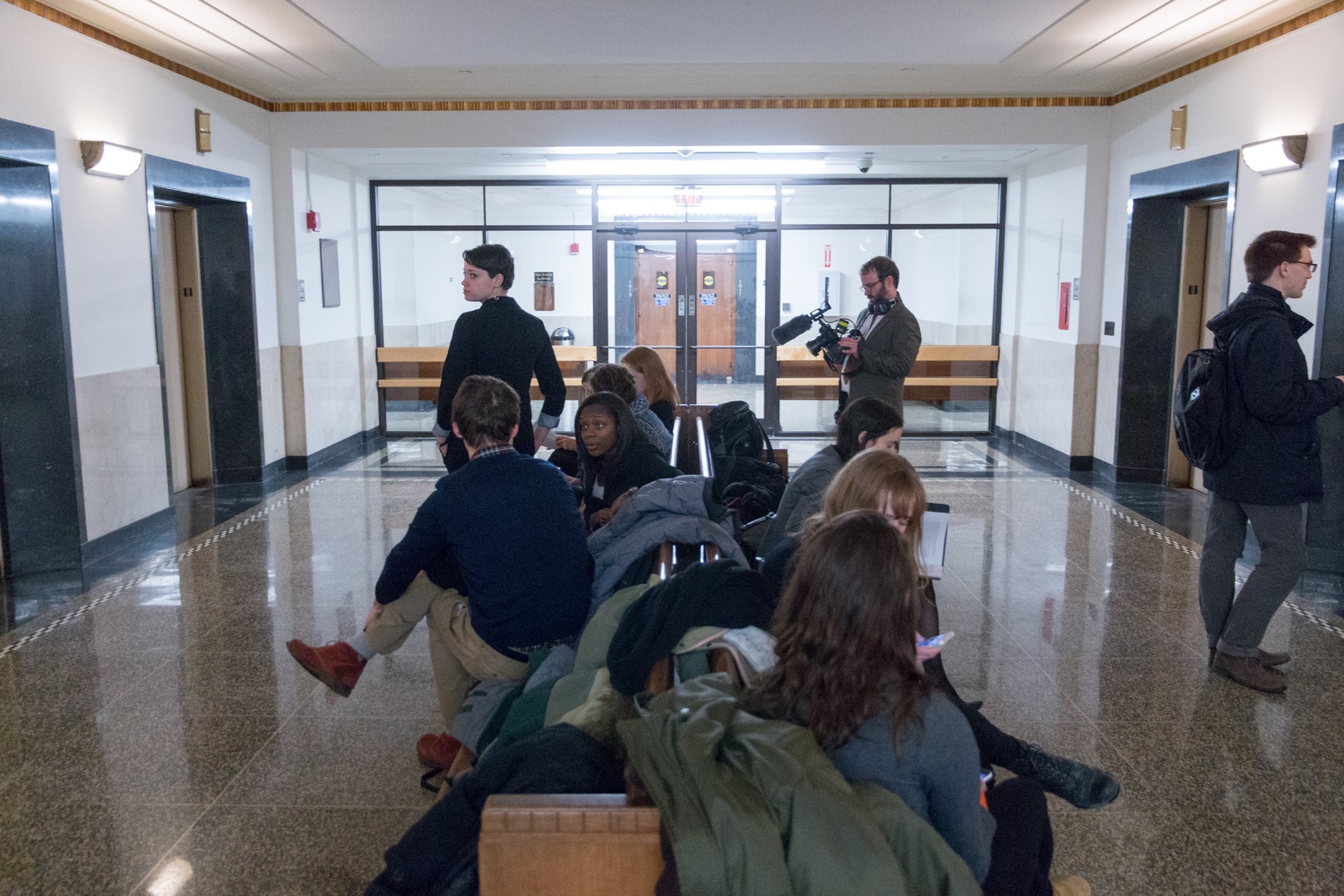 Members of Divest Harvard gather in the elevator lobby just outside a Suffolk County courtroom Friday. By George J Lok

In response, the University, whose tops leaders have repeatedly argued against divestment, filed a motion to dismiss the case. Martin F. Murphy and Jennifer A. Kirby filed the motion to dismiss, which was debated at Friday’s hearing in Suffolk County Superior Court, on behalf of Harvard Management Company—the body responsible for investing the $35.9 billion endowment—in December.

In the hearing, Murphy asserted that the lawsuit should not go forward on the grounds that the Attorney General has the exclusive standing to challenge Harvard’s investment of charitable funds in the state of Massachusetts, except in extreme circumstances he said are not present in this suit. He also argued that investment in fossil fuels is legal and that the plaintiff’s claim that Harvard invested in “abnormally dangerous activities” has no legal basis.

Another motion to dismiss the case, filed on behalf of former Massachusetts Attorney General Martha Coakley and presented by Assistant Attorney General Brett J. Blank and Murphy at the hearing, asserted that the plaintiffs’ status as Harvard students does not give them the right to claim mismanagement of the institution’s endowment against its fiduciaries. 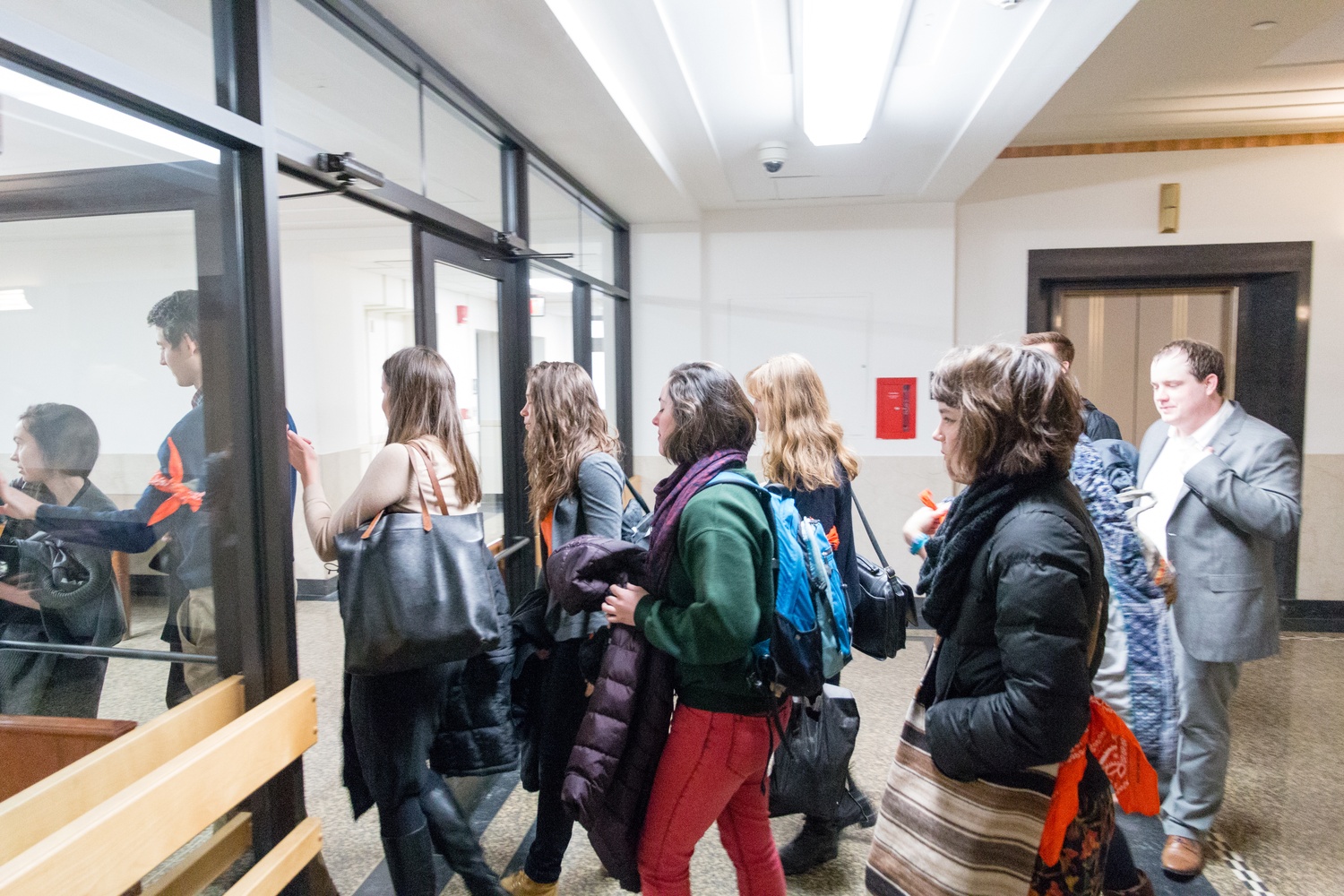 Member of Divest Harvard file out of the elevator lobby toward the Suffolk County courtroom Friday. By George J Lok

The plaintiffs, who represented themselves without a lawyer, maintained in court Friday that their lawsuit should not be dismissed. Harvard must divest on several grounds, they argued, claiming that the impact that fossil fuel investment has on global climate change is cause to sue for “tort,” a wrongful act that causes someone loss or harm.

At the end of the hearing, Massachusetts Superior Court Judge Paul Wilson said he would “take the matter to advisement,” or take extra time to consider the motion to dismiss the lawsuit.

The student complainants, for their part, said they were optimistic for their case. “I feel like we definitely presented the case in the way we intended,” plaintiff and Harvard Law School student Joseph E. Hamilton said after the hearing. “We are optimistic [the judge] will rule in our favor.”

The lawsuit is part of Divest Harvard’s recent efforts to ratchet up pressure on the University to divest from fossil fuels. Last week, members of the activist group occupied Massachusetts Hall for 24 hours in protest of Harvard’s decision not to divest, and in conjunction with alumni, the group plans to host a weeklong sit-in protest in April.